‘I never considered myself a mistress’: Marla Maples says she wanted to show ex-husband Donald Trump he could be loved ‘for his soul, not his money’ – as she reveals the couple went to church to pray together during their affair

Marla Maples has reflected on her relationship with her ex-husband, Donald Trump, revealing that she has never viewed herself as a ‘mistress’ despite having an affair with him while he was married to his first wife, Ivana Trump.

The 55-year-old opened up about the time she spent with the now-president during her appearance on the podcast ‘Journeys of Faith with Paula Faris,’ recalling how she and Donald used to go to church together.

‘I never considered myself the mistress. I mean, that’s the truth,’ Marla said of her relationship with Donald, which began in the late ’80s, about a decade into his marriage to Ivana. 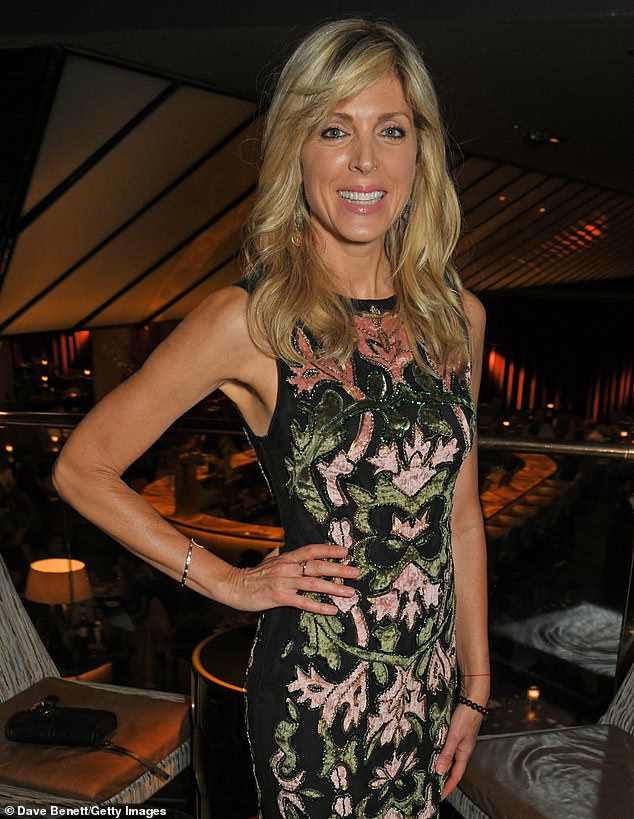 Looking back: Marla, 55, opened up about her relationship with the now-president during her appearance on the podcast ‘Journeys of Faith with Paula Faris’ 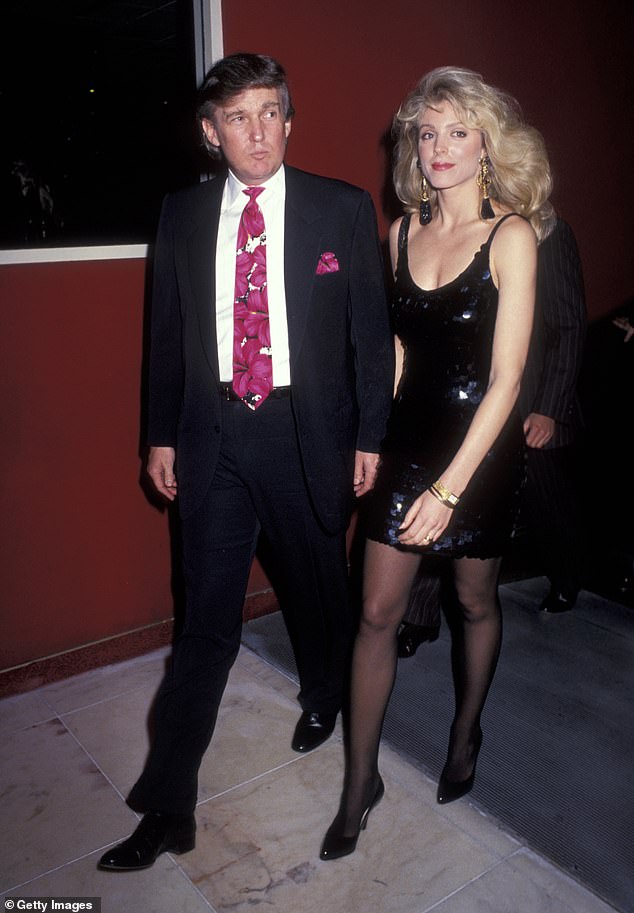 Opinion: ‘I never considered myself the mistress,’ Marla said of her relationship with Donald. They’re pictured in Atlantic City in 1991 when he was still married to his first wife, Ivana Trump

‘It was two people that came together that truly loved each other in a period of time,’ she said of their relationship. ‘I wanted him to see how loved he could be for his soul, not for his money.’

According to Marla, Donald had always planned on being her husband, explaining that he even told her parents: ‘I am going to marry your daughter one day.’

At the start of their affair, Donald had been married to Ivana for over a decade, and they had three young children together, Donald Jr., Ivanka, and Eric.

Ivana revealed in her book, Raising Trump, that she realized her marriage to Donald was coming to an end when she was confronted by Marla.

‘This young blonde woman approached me out of the blue and said, “I’m Marla and I love your husband. Do you?”‘ Ivana recalls in her book, “I said, “Get lost. I love my husband.”‘

Although Marla didn’t mention Ivana by name in the interview, she admitted that she would pray about her relationship with Donald because she didn’t ‘want to be a part of breaking up anything that has a chance.’

She noted that they went through ‘a lot of breakups and makeups during that time’ when things didn’t appear to be the way she thought they were. 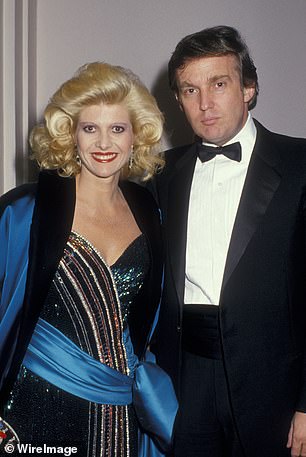 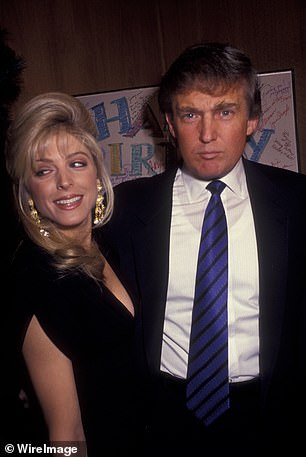 Ex-wives club: Donald had been married to Ivana (pictured in 1987, left) for about a decade when he started his affair with Marla in the late ’80s (pictured in 1991, right) 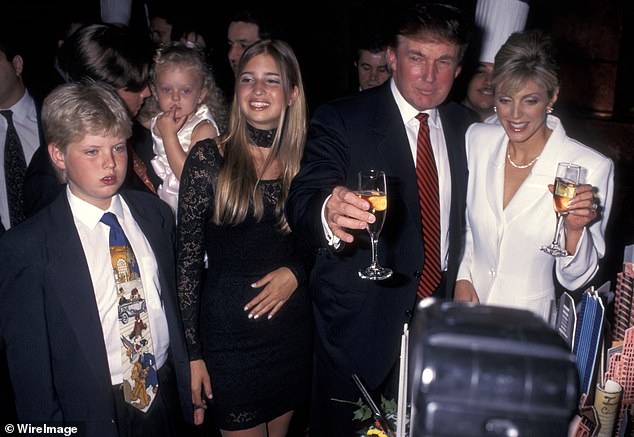 Family: Donald had three young children with Ivana, Donald Jr. (back), Ivanka (center), and Eric (far left). They are pictured with their then-stepmother in 1996

‘My intention was never to bring hurt. Do I wish more than anything that we could have had this relationship after his other divorce papers were signed? Absolutely,’ she said. ‘But it didn’t happen that way, and if you really trust in life, you have trust in the path that it does take you.’

Marla stressed that the last thing she’d ever want to do is break up a marriage, and while she admitted she used to judge men who had affairs, she found herself ‘loving someone before they were divorced.’

Their relationship — and his divorce from Ivana — became a tabloid spectacle that thrust Marla in the spotlight. Looking back on the difficult period of her life, Marla recalled how she relied on her faith to get her through the dark times.

‘I was down on my hands and knees, praying and not even knowing how to stand up and move. I was an actor; I couldn’t even go to auditions,’ she said.

‘It was a heart-wrenching period of time because I really wanted the best for everyone involved, and, unfortunately, the media and, maybe, people feeding the media wanted to turn the whole thing into something that it wasn’t.’

She admitted it was hard for her to be so ‘misunderstood,’ explaining that ‘we all want to be seen.’

Marla, who was raised Southern Baptist, said Donald listened to her and knew her faith was ‘really important’ 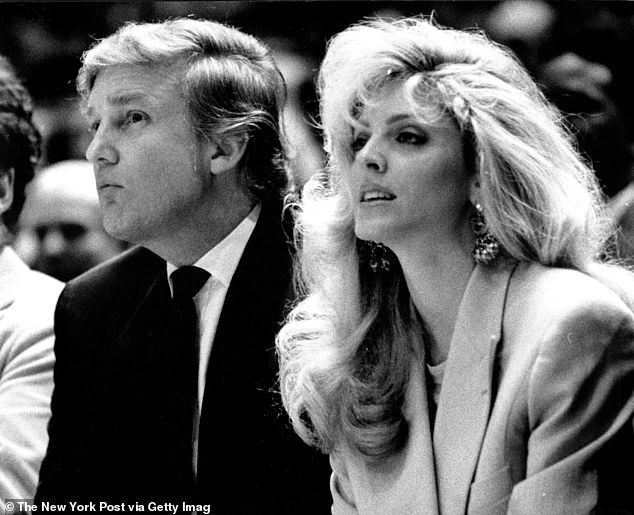 Religious bond: The actress, who was raised Southern Baptist, said Donald knew her faith was ‘important’ to her as she recalled how they’d go to church together. They’re pictured in 1991 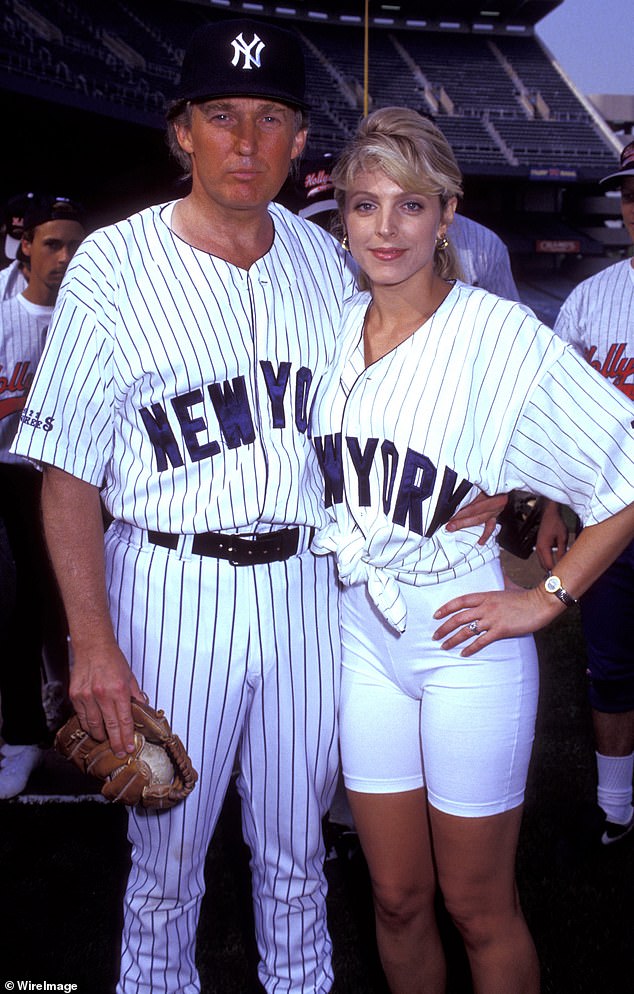 Confession: ‘Do I wish more than anything that we could have had this relationship after his other divorce papers were signed? Absolutely,’ she said. They’re pictured in 1992

Together, they would go pray at Marble Collegiate Church on Fifth Avenue, the same church where he had married Ivana.

‘He would go to church with me,’ she said. ‘That was a very important part of our life. It was the place where I felt that we could ground as a family and get back to truth.

Marla believes that Donald found something in her that ‘was different than what he had seen in the past.’

After divorcing Ivana in 1992, Donald and Marla welcomed their daughter, Tiffany, in October 1993. They married just two months later.

Based on the things Donald has told Tiffany about her, Marla feels that he really gets who she is and how loyal she has been, and in return, she still sees the man who went to church and prays with her. 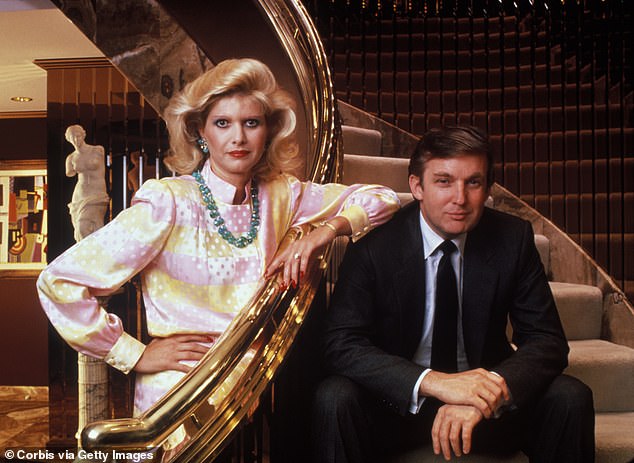 Drama: Donald and Ivana divorced in 1992. Ivana said she knew her marriage was over when Marla came up to her and said, ‘I’m Marla and I love your husband. Do you?’ 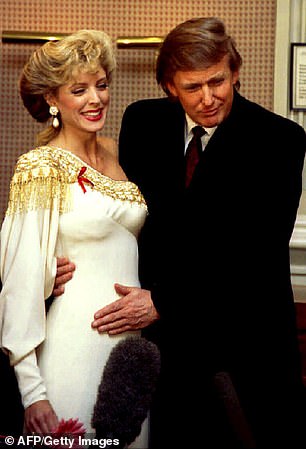 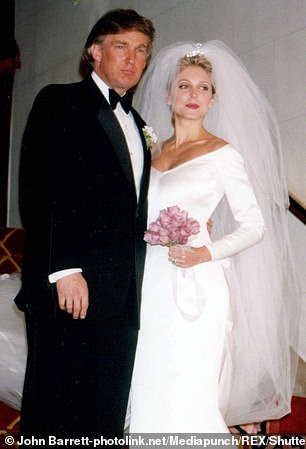 ‘I know that’s inside still. I’ve seen it,’ she said. ‘I would not have been able to love him [if it wasn’t]. I don’t think there was any way this child, Tiffany, could come into the world if there wasn’t that light.’

Marla added: ‘I know that there was a real purity to our relationship. There was something really pure to it then, and sadly we weren’t able to work through it because, in the end, we were too different.

‘I think we had different goals in the end, and it’s sad to have to end a marriage and then move on. I have simpler ideas of life, and I wanted to raise Tiffany in a different world.’

When she was married to Donald and living in the spotlight, she said there was so much expected of her at every moment. She couldn’t even imagine finding 20 minutes to meditate as she does now.

‘There are responsibilities that come when you are exposed on that level,’ she explained. ‘I would walk out the door with my daughter wanting to go to the park and go on the swing set and there would be paparazzi there.

‘Everything felt like it was for show versus just the real heart, I didn’t want my life to be on show.’ 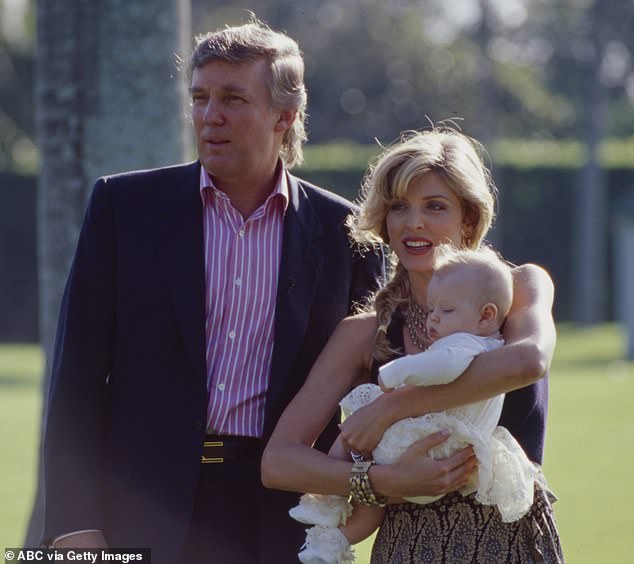 Looking back: ‘I wanted him to see how loved he could be for his soul, not for his money,’ Marla said of their relationship 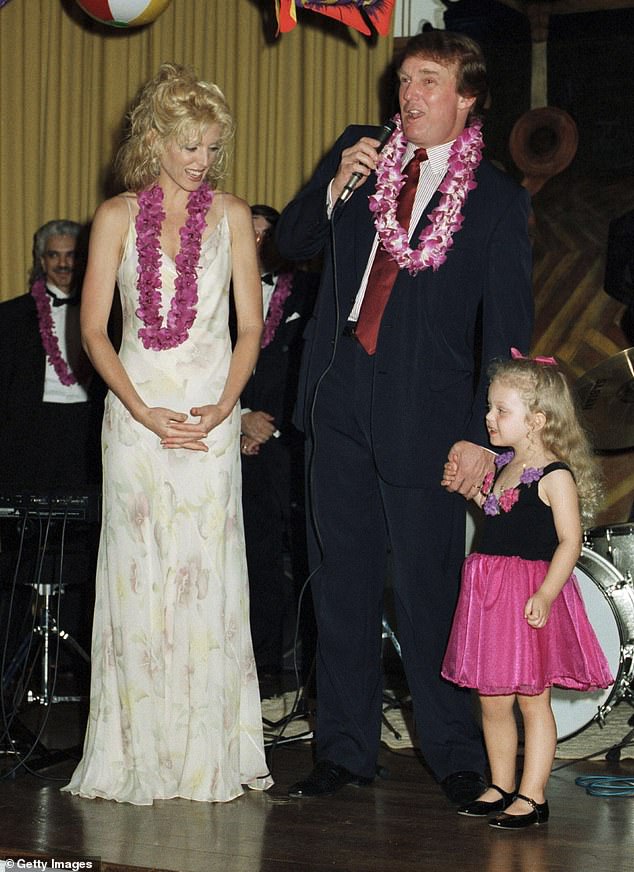 In the spotlight: The mother-of-one recalled being unable to take Tiffany to the park because the paparazzi would be outside their door

After divorcing in 1999, Marla moved to Southern California, choosing to raise Tiffany out of the spotlight in Calabasas.

‘Her daddy gave her a great education and such. It was me who was there around the clock with her,’ Marla said, noting the time they spent together helped them to develop a deep bond and friendship.

According to the mom, Tiffany was looking forward to getting to spend time with her dad when she moved back to New York, and then he decided to run for president.

Donald’s controversial presidency has put Tiffany in the spotlight more than ever before. Marla said it has been difficult to watch her daughter get attacked while hinting that she does not share the same views as her father.

‘When you watch the world pick on your child just because she was born, because her father has different political beliefs than they do . . . The child was raised by a mother in California, and she has her own thoughts and her own beliefs and her own dreams,’ Marla said.

‘But the kids, you know, they love both of their parents,’ she added. ‘It’s horrible the judgement that comes on the kids because of the choices the parents make.’

Aside from her father’s presidency, Marla said it has been a difficult couple of years for the family. She lost both her mother and her mother’s fiancé, whom Marla said was like a ‘stepfather to Tiffany.’ 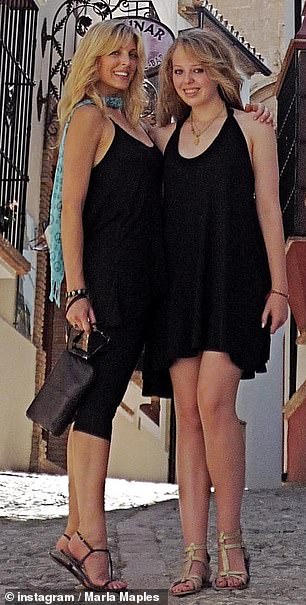 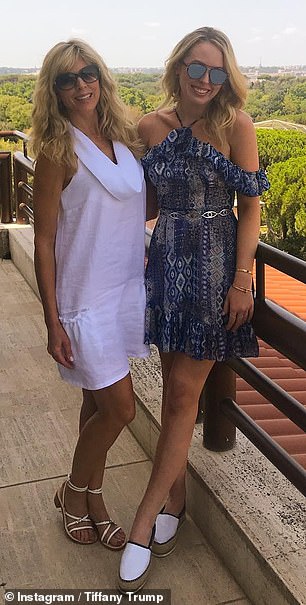 New life: Marla moved from New York City to Southern California to raise Tiffany in Calabasas after her divorce in 1999. They’re pictured in Spain in 2008 (left) and Italy in 2017 (right) 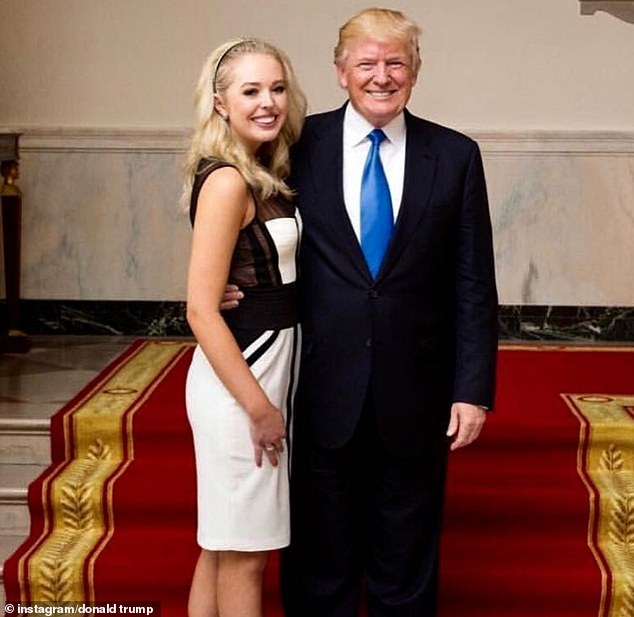 Difference of opinion? The mom admitted it’s been difficult to watch Tiffany get picked on because of her father’s politics while stressing that her daughter has her own beliefs

Back to the future: Marla has said that she wants to make amends with Ivana, but Donald’s first wife won’t talk about her and referred to her last year as a ‘showgirl’

Tiffany, meanwhile, has been heavily focused on her studies, graduating from the University of Pennsylvania before starting law school at Georgetown University, where she is in her second year.

‘She wants to have the best degree she can and she wants to walk in the room and know she is one of the smartest people in the room, whatever she chooses to do,’ Marla said, gushing that Tiffany is also an ‘incredible artist’ who paints and makes jewelry.

Marla noted that people are always telling her daughter she should sell her jewelry, but Tiffany told her: ‘Mommy, I’m just doing it because it’s like my therapy when I am staying up all night and studying and getting ready. I need to have something.’

The former Dancing With the Stars contestant is uniquely spiritual, and in addition to going to church, keeping Shabbat, and studying Kabbalah, she eats a kosher diet.

Tiffany grew up going to church, volunteering, and attending Kabbalah study with her mom. They also pray and meditate together, but Marla admitted that she ‘likes to do deep’ with her practice, which doesn’t always interest her daughter.

As someone who practices what she preaches, Marla stated a few years ago that she wants to make amends with Ivana because she loves her children. However, Ivana has made it clear that she has no interest in forgiving her.

‘I don’t talk about her. She’s a showgirl. Never achieve anything in her life,’ Ivana said of Marla while promoting her book last year.