Madelyn Cline and Chase Stokes proved that they have the same chemistry as their ‘Outer Banks’ characters at the 2021 MTV Movie & TV Awards that aired on May 16.

Madelyn Cline, 23, and Chase Stokes, 28, may have been far from the Outer Banks, but they didn’t need to be in Florida to heat up the 2021 MTV Movie & TV Awards. The Outer Banks co-stars, who are dating just like their on-screen characters Sarah and John B are, had an adorable moment during the show, when they won “Best Kiss” and totally made out on stage.

You’ll get to see even more PDA between Madelyn and Chase on-screen, too, because Netflix recently announced that Season 2 of Outer Banks is arriving this summer. While a firm date hasn’t been announced, we’re already midway through May — meaning the wait can’t be that long! Madelyn even shared sneak peek photos of her and Chase from the new season on May 14, which you can see below. 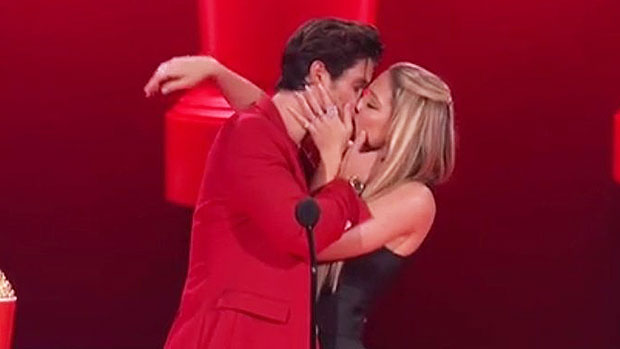 Madelyn and Chase met on the set of Outer Banks, which premiered in April of 2020. The show came out right in the beginning of the pandemic, which Madelyn and Chase quarantined for together in the early phase (along with other co-stars). Following building romance speculation, Chase confirmed that he and Madelyn were indeed dating — just like their characters — in a sweet Instagram post in June of 2020. Just a month later, Chase said he was “super excited” about the budding romance in an EXCLUSIVE interview with HollywoodLife.

A few months later, Madelyn gave a happy update about her relationship with Chase. “It’s really cool. Love is tight,” the actress gushed during a video interview with Entertainment Tonight in Nov. 2020. She added, “It’s cool to share this experience with your favorite people and also your favorite person. I don’t really know — I feel very happy.”

As for how Madelyn maintained a professional relationship with Chase when Outer Banks began filming again later in 2020, she told ET, “We definitely have boundaries because we were friends before this. And we understood how we worked as individuals before we were seeing each other. We knew how we worked professionally — like we knew what each other’s personal boundaries were for certain things.”