Lee Radziwill, the free-spirited former princess who shared the qualities of wealth, social status and ambition with her older sister, Jacqueline Kennedy Onassis, but who struggled as an actor, decorator and writer to share her sister’s aura of success, died on Friday at her home in Manhattan. She was 85.

It cannot have been easy living in the shadow of one of the world’s most famous women, the wife of President John F. Kennedy, and Mrs. Radziwill was hardly immune to competitive instincts. Jackie Kennedy had helped create the mystique of the thousand days of Camelot — a woman who had made her new home a place of elegance and culture, who had brought babies into the White House for the first time in the 20th century.

Mrs. Radziwill, the wife of a Polish émigré nobleman, Prince Stanislas Radziwill, was an international socialite and fashion icon who for years was on lists of the world’s best-dressed women. Like Jackie, she had cultivated passions for painting, music, dance and poetry. She made several attempts for professional recognition, but achieved only pale reflections of the spotlight on her sister.

For years — especially before and during Mrs. Kennedy’s time as first lady — Mrs. Radziwill had been close to her sister, sharing holidays and family gatherings; attending state functions; visiting the White House; hosting the Kennedys at the Radziwill townhouse in London; and, notably, taking a monthlong 1962 vacation with Jackie in Italy, India and Pakistan. 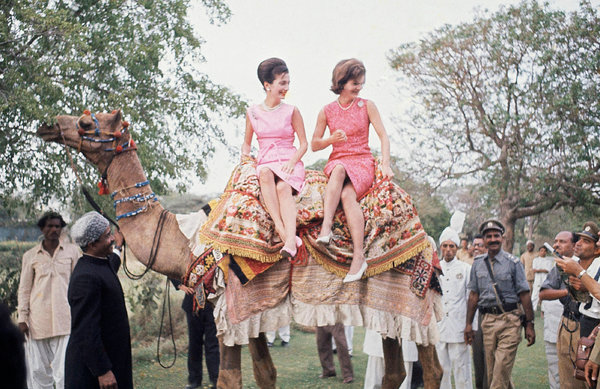 Cementing family ties, the Kennedys had named their firstborn child Caroline, after Caroline Lee, who had always been known by her middle name. Mr. Kennedy had been godfather to the Radziwills’ daughter, Anna Christina.

It had all ended with the president’s assassination in 1963.

Rushing to Washington from her home in London, Mrs. Radziwill, a childhood sibling rival who had been increasingly close to her sister in the pre-assassination years, brought sensitivity and emotional support to the crisis at hand. In the ensuing days, with the nation watching, she was a visible support for the widow in weeds, escorting her husband’s body to the Capitol to lie in state; during the funeral at the Cathedral of St. Matthew the Apostle, and at burial ceremonies at Arlington National Cemetery.

Mrs. Radziwill kept her composure until Air Force One, passing overhead, dipped a wing in salute. Then she wept.

Behind the scenes, she pinned a note to Jackie’s pillow, expressing love and admiration for her courage. And she helped Jackie get through the last terrible day, leaving the White House with her children and moving to the diplomat W. Averell Harriman’s Georgetown house, which had been made available for Jackie and the children.

In the small world of celebrities, it is hardly surprising that Mrs. Kennedy’s future husband, Aristotle Onassis, the Greek shipping magnate, had been a close friend of the Radziwills’. They had hosted dinner parties in London for him, and had joined him on cruises aboard his yacht, the Christina. Indeed, tabloids had long romantically linked Mrs. Radziwill and Mr. Onassis, a notorious womanizer.

In a brief telephone interview for this obituary, Mrs. Radziwill scoffed at the notion that she had had an affair with Mr. Onassis, and insisted that she had “no regrets, none at all,” about her relationship with her sister, which was widely reported to have been strained after Mrs. Kennedy married Mr. Onassis.

In August 1963, after Mrs. Kennedy gave birth prematurely to a third child, Patrick, who died after a day, Mrs. Radziwill called her, relaying an invitation from Mr. Onassis to recuperate on his yacht. A grieving Mrs. Kennedy, wanting privacy, accepted the invitation and, accompanied by the Radziwills, joined Mr. Onassis for an extended cruise in the Aegean Sea.

“The story of Jackie’s effect on Ari during that cruise has been told many times,” Diana DuBois wrote in “In Her Sister’s Shadow: An Intimate Biography of Lee Radziwill” (1995). “Lee would tell her intimates later that she was only trying to do something nice for her sister when she brought her along on the Christina, and that Jackie co-opted Onassis on that cruise.”

Echoing news accounts of the era, the book added: “Jackie’s expropriation of Onassis drove a deep wedge between the two women, which, when coupled with a parallel development between Jackie and Robert Kennedy in the aftermath of the assassination, was the beginning of a profound change in their relationship, one that would last.”

In the months after the assassination, according to historians and news reports of the day, Robert Kennedy provided deep emotional support in a time of psychic trauma for Jackie, and the fact that the two were frequently seen together in absorbed conversation gave rise inevitably to rumors that their relationship was something closer than the kindness and comforting of an in-law. But nothing more substantive was ever demonstrated.

Five years after the president’s assassination, in a made-for-tabloids event, Mrs. Kennedy and Mr. Onassis were married, with a prenuptial agreement that guaranteed her millions. Mrs. Radziwill attended the wedding on Skorpios, Mr. Onassis’ private island.

As the sisters drifted apart, Mrs. Radziwill in the 1960s made new, creative friends, including the dancers Rudolf Nureyev and Margot Fonteyn, the architect and decorator Renzo Mongiardino, the stage and costume designer Cecil Beaton, and the writer Truman Capote.

In 1967, encouraged by her friends, Mrs. Radziwill began an acting career. She studied with teachers from the Royal Academy of Dramatic Art and the London Academy of Music and Dramatic Art. Mr. Capote advised her to make her debut as Tracy Lord, the spoiled, spirited socialite in Philip Barry’s comedy “The Philadelphia Story.” It had been Katharine Hepburn’s role on Broadway and in a Hollywood film.

The revival was staged in Chicago. Publicity hailed the star as Jackie Kennedy’s princess sister. The opening was a media circus. The reviews were devastating. “A new star is not born,” The Chicago Tribune crowed. Other critics called her performance wooden and amateurish. She was hurt, but audiences were not put off, and she gamely finished a four-week run.

Mr. Capote then urged David Susskind, the producer, to put his protégé in a television play. A remake of “Laura,” the classic 1944 Otto Preminger film, was chosen, with Mrs. Radziwill again in a role made unforgettable by another star, Gene Tierney. Mr. Capote helped write the script. It aired nationally on ABC in January 1968.

The reviews were not kind. “A stunning clotheshorse upon whom no discernible Thespian demands were made,” wrote Jack Gould, the television critic for The New York Times. Variety intoned: “She is just not an actress.” Mrs. Radziwill returned to London, her acting career over.

The Radziwill-Capote friendship ended soon after. They fell out when she refused to testify for Mr. Capote in a libel suit brought by Gore Vidal over a Capote assertion, citing her as his source, that Mr. Vidal had been ejected drunk from the Kennedy White House. Mr. Vidal said he had merely been escorted to his hotel by friends after antagonizing Attorney General Robert Kennedy. Mr. Vidal won the suit and an apology.

In 1976, Mrs. Radziwill founded an interior design firm. She attracted a few corporate and wealthy private clients and drew favorable publicity, including a feature spread in Architectural Digest. But her designing career was brief.

Her writing ambitions fared no better. She was contracted to write a memoir in the early 1970s and another in the late ′90s, but neither book was finished. In 2001, she published “Happy Times,” a slim picture book with reminiscences on the Bouvier sisters’ carefree early years.

Caroline Lee Bouvier was born in Manhattan on March 3, 1933, to John Vernou Bouvier III and the former Janet Norton Lee. Her mother was socially prominent and her father, a Wall Street broker called Black Jack, traced his lineage to French soldiers who fought in the Revolutionary War.

The parents were divorced in 1940, and Mrs. Bouvier married Hugh D. Auchincloss Jr., a Standard Oil heir, who had three children by previous marriages and two, Janet and Jamie, in his marriage to Mrs. Bouvier.

Lee grew up in the shade of her sister, who was nearly four years older and was her father’s favorite and an accomplished equestrian. They lived in commodious Manhattan apartments and at estates on Long Island and in McLean, Va., and Newport, R.I., where they learned to sail on Narragansett Bay.

Lee attended the Potomac School in Washington and Miss Porter’s School in Farmington, Conn. Her teachers at Miss Porter’s found her bright and imaginative, but her grades were average, whereas her sister was remembered as a star. Lee enrolled at Sarah Lawrence College, but left in her sophomore year to study art in Italy.

She joined Harper’s Bazaar in 1950 as an assistant to the legendary editor Diana Vreeland. She held the job briefly, but it sparked her lifelong interest in fashion.

In 1951, Lee and Jacqueline Bouvier toured London, Paris, Rome, Florence, Venice and Madrid. Their reminiscences were collected in “One Special Summer” (1974).

In 1953, Lee married Michael Temple Canfield, the adopted son of Cass Canfield, chairman of the publisher Harper & Brothers. They lived in London, where Mr. Canfield was private secretary to Winthrop Aldrich, the United States ambassador to the Court of St. James’s. They had no children and were divorced in 1958. The marriage was later annulled by the Catholic Church.

In 1959, she married Prince Radziwill, 20 years her senior, who had arrived in London in 1946 and made a fortune in real estate. The couple had an estate near Henley-on-Thames and a Georgian townhouse near Buckingham Palace. They had two children, Prince Anthony and Princess Anna Christina, and were divorced in 1974. Anthony died in 1999.

In 1988, Mrs. Radziwill married Herbert Ross, the director and choreographer, whose films included “The Sunshine Boys” (1975), “The Goodbye Girl” (1977) and “Steel Magnolias” (1989). They were divorced shortly before his death in 2001, and she resumed the Radziwill surname. In addition to her daughter, Anna Christina, Mrs. Radziwill is survived by a daughter-in-law, the actress Carole Radziwill, and her half-brother, Jamie Auchincloss. Her half-sister, Janet Auchincloss, died in 1985.

Mrs. Radziwill was a public relations executive for Giorgio Armani from 1986 to 1994, directing special events for the Italian fashion designer.

After Mrs. Onassis died in 1994, her will made no material provision for her sister, “for whom I have great affection,” Mrs. Onassis wrote, “because I have already done so in my lifetime.” It left bequests to each of her sister’s children. The disinheritance of Mrs. Radziwill was widely interpreted as another sign of strain between the sisters, whose relationship had captivated the press and public throughout their lives.

Mrs. Radziwill, who lived in Manhattan, said in a 2013 interview with The Times that being Jacqueline Kennedy Onassis’ sister had been double-edged.

“In some funny way, I’m lucky that there was so much more interest in my sister,” she said. “At times it was annoying, at times funny. Perhaps the most depressing part was that whatever I did, or tried to do, got disproportionate coverage purely because of Jackie being my sister. But you learn to deal with scrutiny, even the lies, as long as it’s not malicious.”