Kim Kardashian West is addressing her husband Kanye West’s struggle with bipolar disorder in a heartfelt message on Instagram. The 43-year-old rapper’s mental health has come under increased scrutiny in recent days after he launched a potential bid for president and unleashed a series of bizarre statements and tweets.

On Sunday, West hosted a campaign rally in South Carolina, which included controversial rants about Harriet Tubman and abortion. West did not end up making the filing deadline to appear on the South Carolina ballot.

On Monday, he tweeted and deleted a series of late-night tweets, which took aim at both Kardashian West and her mother, Kris Jenner.

In several Instagram Story posts Wednesday morning, Kardashian West opened up about how her husband’s mental health has affected him and their family.

“Anyone who has [bipolar disorder] or has a loved one in their life who does, knows how complicated and painful it is to understand,”  she wrote. “I’ve never spoken publicly about how this has affected us at home because I am very protective of our children and Kanye’s right to privacy when it comes to his health.”

She said she decided to open up in order to destigmatize the condition and clear up some of the misconceptions about mental illness.

“People who are unaware or far from removed from this experience can be judgmental and not understand that the individual themselves have to engage in the process of getting help no matter how hard family and friends try,” she wrote. 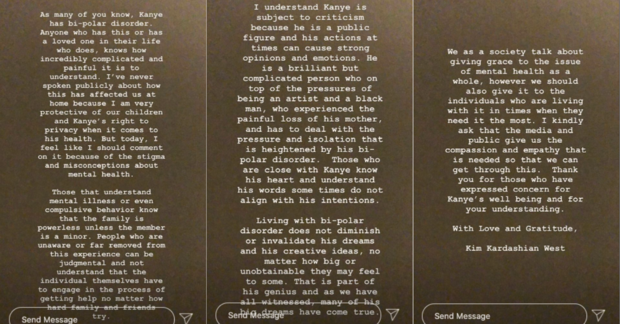 She said that West will always be subject to criticism, but asked for “compassion and empathy” as her family grapples with his disorder. She also voiced her support for her husband.

“He is a brilliant but complicated person who on top of the pressures of being an artist and a black man, who experienced the painful loss of his mother, has to deal with the pressure and isolation that is heightened by his bi-polar disorder,” Kardashian West wrote. “Those who are close with Kanye know his heart and understand his words some times do not align with his intentions.”

Kardashian West said his disorder does not “diminish or invalidate his dreams and his creative ideas, no matter how big or unobtainable they may feel to some.”

“That is part of his genius and as we have all witnessed, many of his big dreams have come true,” she added. She concluded with a passionate plea to destigmatize talking about mental health and give “grace” to people struggling.

Kanye West spoke about his experience with bipolar disorder in an interview with David Letterman in May 2019.

“It is a health issue. This — it’s like a sprained brain, like having a sprained ankle. And if someone has a sprained ankle, you’re not going to push on him more. With us, once our brain gets to a point of spraining, people do everything to make it worse,” West said in the interview, adding that he was under a doctor’s care.

Another type, known as Cyclothymic Disorder, is characterized by depressive and hypomanic symptoms that last several years, but not shorter episodes. An individual may also be diagnosed with unspecified bipolar disorder if their symptoms do not match the other three types.

For more information about mental health care resources and support, The National Alliance on Mental Illness (NAMI) HelpLine can be reached Monday through Friday, 10 a.m.–6 p.m. ET, at 1-800-950-NAMI (6264) or email [email protected].