In the category of essential North American dishes, one stands in a league of its own: chicken & waffles. It’s really a perfect pairing of sweet, savory, soft, and crunchy. But, unless you live in the south, the dish can be hard to come by — and making chicken and waffles from scratch is a huge time commitment. Just when you thought all brunch hope was lost, KFC has announced its legendary take on Chicken & Waffles will return to KFC’s menu for a limited time.

In a press release sent to Bustle, the famed fried chicken chain announced its plans to reintroduce Chicken & Waffles to the menu after an overwhelming push from the public. Chicken & Waffles was initially added to KFC menus in November 2018 as a limited edition item, but it turns out it was more "limited" than KFC may have anticipated. In fact, according to a KFC, a number of locations sold out of the dish in just two weeks. If you were part of the unlucky crowd who didn’t get a chance to taste the savory-sweet combo, now is your chance — per KFC, the dish will be on the menu from March 23 to April 29. 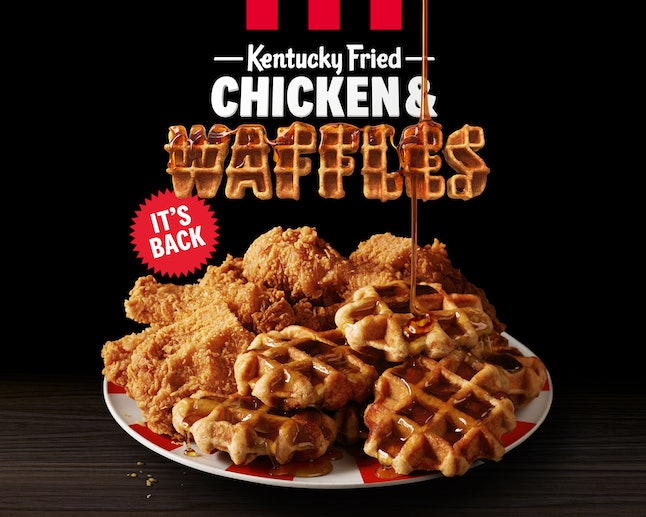 According to KFC, the dish "pairs the Colonel’s Extra Crispy fried chicken with scrumptious Belgian Liege-style waffles." As with its initial debut in November 2018, Kentucky Fried Chicken & Waffles is available in two separate forms: as a basket meal or as a sandwich.

In fact, your chicken and waffle options are expansive. If you choose the basket, you can select it as a "one-piece breast, two-piece thigh and drum or three-piece tenders." It’ll include one waffle and a side of Mrs. Butterworth’s syrup, and retails for $5.49. The sandwich style of Chicken & Waffles includes "a KFC breast fillet nestled between two mouthwatering waffles." It, too, is accompanied by Mrs. Butterworth’s syrup, and retails for $5.99.

For those times you’re EXTRA HUNGRY, you can opt for the Big Basket meal. Big Basket meals include two waffles, two syrups, and an option of "two-piece white meat, three-piece dark meat or four-piece tenders." It retails for $7.99.

It stands to reason that KFC would look to add more Southern cuisine staples to its menu, but in the past year the chain has really been leaning into it. Late last summer, KFC released three saucy styles of fried chicken. Hot Honey (served with pickles), Nashville Hot, Georgia Gold honey mustard BBQ, and Smoky Mountain BBQ fried chicken were introduced August 2018, and are still available, according to KFC’s website. 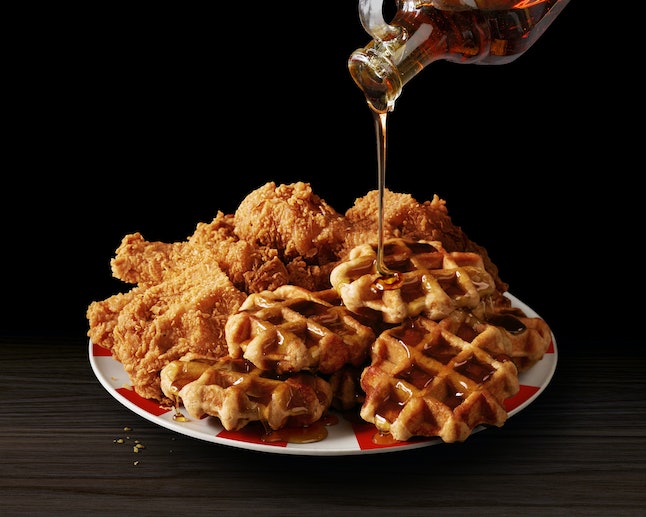 But nothing quite compares to the glory that is Chicken & Waffles. Andrea Zahumensky, the chief marketing officer for KFC U.S., said in a statement,, “We expected people would love Kentucky Fried Chicken & Waffles when we launched it in 2018…But we underestimated how much love there would be, so we’re bringing it back just four months later. Too soon? Not a minute.”

But the dish will only be here for a little while. Head into KFC for Kentucky Fried Chicken & Waffles before April 29, when the dish will be gone from menus once again.