Kristina Keneally’s colleagues enthusiastically retell the moment they discovered just how politically ruthless she could be. It was in the early hours of May 19, 2019 and the corpse of Bill Shorten’s prime ministerial dream was not yet cold.

Keneally had been all-in with Shorten as captain of the “Bill Bus” during the five-week election campaign, standing alongside the then Labor leader on the hustings around the country, revving up the media pack and acting, when needed, as his political attack dog. 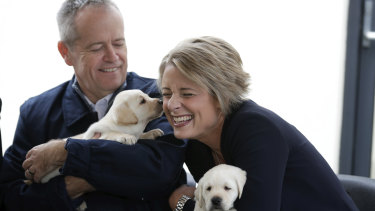 But when her colleagues awoke the morning after their shock election loss, it spread like wildfire that the former NSW premier and one-time TV host had replaced images of her alongside Shorten on her social media pages with snaps of her and long-time friend Anthony Albanese.

“It was shameless and to be honest a little bit offensive,” one of Keneally’s caucus colleagues recalls. “Bill invested a lot in Kristina’s Canberra ambitions; [election analyst] Antony Green had barely called the result on the ABC and she’s jumped straight in with Albo.”

Keneally on Friday confirmed she would embark on the next stage in her political career at the next election, switching from the Senate to contest Fowler, a safe Labor seat in Sydney’s western suburbs. Victory would give her a place in the House of Representatives, increase her already high profile and likely insert her into the ranks of future leadership hopefuls.

In her short stint in Canberra, she has become a prominent fighting figure for Labor, attempting to punch back at the Morrison government and its head-kicker-in-chief, Peter Dutton, over immigration, right-wing terrorism and border security.

But her move to the lower house, a result of a long-running internal tussle with fellow Right-faction senator Deb O’Neill for top billing on the Senate ticket, has caused unrest in both the federal Labor caucus and among ALP branch members in Keneally’s potential new home in Sydney’s west. And it now threatens to become a major internal distraction as the party’s commitment to diversity in its ranks is questioned.

Supporters of Keneally are downplaying dissenters as a handful of people who are jealous and think she gets in the way of their own political ambitions. The woman who was the frontrunner to replace retiring MP Chris Hayes in Fowler, lawyer Tu Le, a daughter of Vietnamese refugees, will likely find her way into NSW Parliament sooner or later, they say. A neat solution.

After days of speculation, Keneally publicly revealed that her decision to move to the lower house was influenced by an approach by ALP branch members urging her to consider nomination for the seat of Fowler.

“In making this decision, I reflected on my inaugural speech in the NSW Parliament in 2003 where I outlined the three values that motivate my political activity: a passion for social justice, the importance of community and a life lived with energy and enthusiasm,” Keneally says.

“In that speech, I said that a community is at its best when all its members are supported and included. Serving as the member for Fowler holds true to those values.”

While she is a rock-star figure within Labor’s progressive membership base, Keneally remains polarising among caucus members and within her own Right faction. Some, such as the outgoing Hayes and frontbencher Tony Burke, believed parachuting her into the culturally diverse, working-class seat of Fowler, which takes in Cabramatta, Liverpool, Fairfield and Warwick Farm, is a mistake.

Hayes says the candidate he believed should replace him, 30-year-old Le, was a “great Australian story”.

“It would have been sensational to be able to not only say that we in Labor are the party of multiculturalism but to actually show it in our faces,” he says. “It would have enhanced the caucus … to have as its member another woman, but also a woman of colour.” 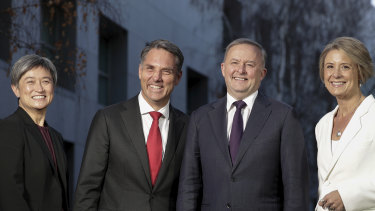 Hayes’ brother Gerard, who serves as secretary of the powerful NSW Health Services Union, accuses Labor of further alienating its base by imposing Keneally, who lives 44 kilometres away on the exclusive Scotland Island in northern Sydney, on voters. He has now threatened to remove his massive union base away from the faction.

“We can’t just stand by and allow something like this to happen. This is why we are losing our base,” he says.

Keneally’s path to Canberra was unconventional and involved plenty of setbacks. After two years as NSW premier, her government was sent packing by voters in 2011. She spent some time in opposition before quitting Parliament and becoming chief executive of Basketball Australia. A few years later, the American-born Keneally became a dynamic (and acceptable) face of left-wing politics on Sky News Australia.

Speculation about her political future returned and in 2017 she was hand-picked by Shorten to stand against John Alexander in the Sydney seat of Bennelong. Despite a 5 per cent swing in its favour, Labor could not reclaim the seat that was famously won by Maxine McKew a decade earlier when she deposed John Howard and the party was swept to power.

But the resignation of Sam Dastyari in 2018 amid a foreign donor scandal gave her the opportunity to join the Senate. A rapid rise followed and after Labor’s 2019 election defeat she was elevated to shadow cabinet and elected deputy Senate leader in a manufactured move to ensure Labor’s four-person leadership team had a 50:50 gender split.

Would-be prime minister Albanese has been close friends with Keneally for two decades. He said on Friday had Keneally wanted to remain in the Senate she would have secured the No.1 spot – a point heavily disputed by other members of the Right-faction grouping.

Albanese, playing down the idea of any dissent in the ranks, is desperate for her to sit alongside him on the treasury benches should Labor form government at the next election.

“She’s a fantastic and valued member of my team. I think she makes an enormous contribution as both a senator and as a frontbencher,” he said on Friday.

‘I have always made the choice to step up and fight.’

It was a message echoed by NSW Labor powerbroker Bob Nanva on Thursday night, who emailed Right-faction members, telling them Keneally was the candidate the party, the leader and the electorate needed.

“As a member of the federal leadership team, Kristina will make sure that Fowler is represented at the highest levels of an Albanese Labor government. It will also mean one of the most formidable parliamentary performers joins Labor’s House of Representatives team,” Nanva wrote.

But some in Fowler believe saving Keneally’s political career in the lower house seat is a missed opportunity for renewal and to boost Australian-Asian representation in Federal Parliament.

Toan Nguyen, a former deputy mayor of Bankstown council and ALP branch member, says every time the party has a problem, it is “dumped” in Sydney’s west and south-west.

“Many Labor members in this area have been waiting for an opportunity for a local candidate to represent us, but Sussex Street has done little to promote this area or support local candidates. Labor always talk about inclusion, multiculturalism and care for the working class but in reality, never give the people from this area a fair go,” he says.

But Keneally, 52, assures everyone her heart is in it, vowing to move to the electorate, fight for the values of its community and become home affairs minister in a Labor government.