Since NBA players have to compete from the fall through the spring (and if they’re lucky, into June for those who make it to the Finals), summer, the league’s offseason, is prime time for weddings for its stars.

Just this past August, NBA champion Draymond Green of the Golden State Warriors married his longtime partner, Hazel Renee, tying the knot in front of a packed house filled with famous faces and fellow athletes. While appearing on the latest season of LeBron James’ popular series UNINTERRUPTED The Shop (episode 507) premiering Oct. 7, Green talked with James, Maverick Carter, Paul Rivera, PJ Tucker and Lisa Leslie about the ups and downs of planning weddings — including dealing with both unreliable (those who say they’ll be present and don’t make it) and unwanted guests (those who were disinvited or not invited in the first place).

“The way he sold it to me I thought he was for sure showing up,” Green said of Durant surprising him by being a no-show. “He told me he was going to come and find him a girl, something of that nature. [I said] ‘have at it.’”

For James though, there are some guests who did come to his wedding to wife Savannah that if he tied the knot in the present, he wouldn’t extended an invite to. 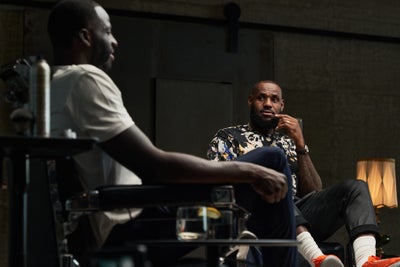 “There was definitely people that was at our wedding, no way they get an invite,” he shared. “You got certain people that just show up for the spectacle. And then me personally, I’ve just grown to a whole different stratosphere in life that we just don’t see life the same — especially not 10 years later.”

Green could understand that sentiment, noting that he had to pull the invitations of some guests who were coming for all the wrong reasons.

But nothing could be worse than guests showing up you don’t even know. James said he caught wedding crashers at his 2013 wedding.

“We had two wedding crashers…that no one knew,” he said.

They got exposed after addressing a certain celebrity by his government name, which no one who really knew the person would use to address him. That individual brought his concerns to James, and that’s when the jig was up.

“My security go over to them and say, ‘Who y’all with?’ They like, ‘oh we with him,’” James said, pointing. “And when they said ‘him,’ him turned around at the same time and was like, ‘Hell nah, them muthaf–kas ain’t with me!’ They got put out. Those muthaf–kas walked out with a plate and everything!”

Yes, wedding season for the NBA’s biggest names can be colorful to say the least. Check out a preview of the conversation from premiere of Season 5 of UNINTERRUPTED The Shop, presented by Grey Goose.