A Mississippi River kayaker said photos he took about five years before a crack was found in the Interstate 40 bridge linking Tennessee and Arkansas appear to show the fracture that led transportation officials to close the span indefinitely last week.

Arkansas transportation officials said they cannot confirm or refute what’s shown in the kayaker’s photos, which raise questions about how early the crack appeared. An Associated Press photo editor inspected metadata from one of the photos and determined it was shot on August 6, 2016.

The I-40 bridge connecting Memphis and the Arkansas city of West Memphis was shut down on May 11 after inspectors found a crack in one of two 900-foot horizontal steel beams that are critical for the bridge’s structural integrity. River barge traffic under the span was closed that day but reopened three days later. Road traffic has been rerouted to the nearby Interstate 55 bridge.

Repairs to the heavily used, six-lane I-40 bridge are expected to begin this week, but a long-term fix could take months, officials said. The states are relying on the four-lane, 71-year-old I-55 bridge to get cars and trucks across the Mississippi River and maintain the flow of commercial vehicles. Engineers are inspecting the I-55 bridge to make sure it can withstand the heavier traffic.

Barry W. Moore, 64, told The Associated Press on Wednesday that he took the photos while kayaking on the Mississippi River in August 2016 with a group of friends from the Boy Scouts, where he volunteers. Moore said he stored the images on his computer after the trip and went back to look for them after he heard about the discovery of the crack.

Moore said he zoomed in on the photos, found the crack and showed them to his brother. 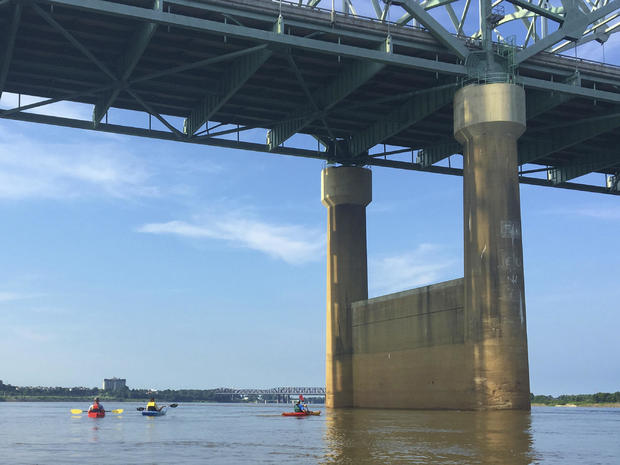 Moore said he sent the photos to the state transportation departments in Tennessee and Arkansas. He heard back from the Arkansas Department of Transportation this week, he said.

Arkansas Department of Transportation spokesman Dave Parker said the agency went through its photos of the bridge dating back to the early 2000s and couldn’t find any confirming or refuting the 2016 pictures. The department, which inspects the bridge at least annually, did not have access to drone videos for its inspections before 2019.

“I can’t really comment as to the accuracy of these photos,” Parker said.

The kayaker’s pictures, which were first reported by WMC-TV in Memphis, bring into question just how long the crack had been visible in the bridge’s structure.

Adel Abdelnaby, an engineer and University of Memphis professor who has been closely watching the I-40 bridge situation, reviewed the photos for the AP. He said it appears the break in the beam could have been present before 2016 because fatigue cracks take time to develop, and the beam shown in Moore’s photo was already corroded.

“Based on research and science, this crack took so much time,” said Abdelnaby, who has inspected bridges and performs fatigue tests on bridge beams as part of his research. “It developed as a very small crack before 2016, and it took its time to propagate.”

The cause of the crack has not been officially determined, but Tennessee Department of Transportation chief engineer Paul Degges has said that fatigue of having 50,000 vehicles pass daily on the bridge could be a contributing factor.

On Monday, the Arkansas transportation department fired the inspector who missed the crack in the bridge’s 2019 and 2020 inspections.

Documents released Thursday by the Arkansas Department of Transportation under a Freedom of Information Act request identified statewide bridge inspector Monty Frazier as the employee fired for missing the crack, which a memo said put the span “in jeopardy of falling.”

“Mr. Frazier, neglecting his responsibilities to follow proper fracture critical inspection techniques by getting within arm’s length of the outside of the tie girder, was why the crack was not discovered,” State Heavy Bridge Maintenance Engineer Michael Hill wrote in a memo recommending Frazier’s termination for dereliction of duty.

Frazier did not immediately return a message left at a number listed for him. He began work with the Arkansas DOT as a mechanic in 2006 and had served as statewide bridge inspector since 2016.

According to the memo, Frazier said he did not believe it was safe to use the under-bridge unit to inspect along the outside of the tie girder, despite it being standard procedure to do so. Hill wrote that the machinery had safety features to keep it stable.

The Arkansas DOT has also referred the incident to federal investigators and said it is reinspecting the other eight “fracture critical” bridges that had been reviewed by the fired employee.

Moore said he feels like he performed a public service by sharing the photos.

“I’m just glad I took photos,” said Moore, who lives in the Memphis suburb of Collierville and is retired. “I think the engineers need to know what state it was really in five years ago.”