Jessica Mulroney has returned to Instagram after a two-month break in the wake of a bitter race row to mark her twin sons’ tenth birthday – while also shutting down rumors about the end of her friendship with Meghan Markle.

The 40-year-old stylist shared a sweet video on her account on Tuesday – exactly two months to the day since her last post – in which her husband Ben, 44, is seen delivering a birthday cake to their sons Brian and John, who then blow out the candles together.

But while the clip focused on the happy family moment, Jessica’s accompanying caption touched on the struggles she has faced since black influencer Sasha Exeter accused her of ‘threatening her livelihood’ after ‘taking offense’ at a Black Lives Matter video posted by the online star. 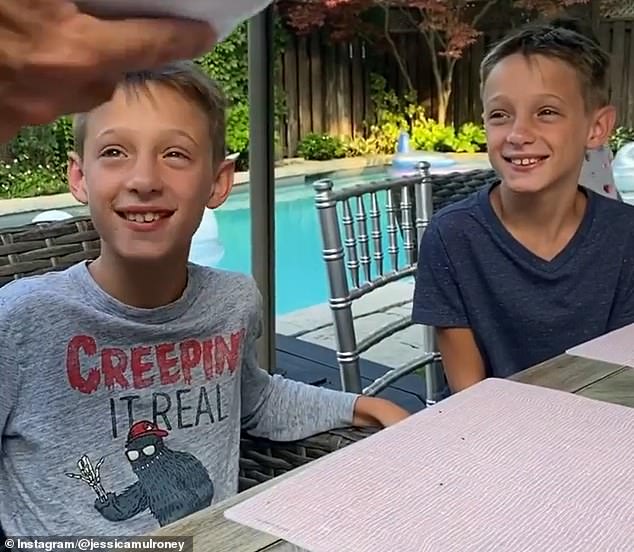 Celebration: Jessica Mulroney returned to Instagram on Tuesday after a two-month break in the wake of a bitter race row to wish her twin sons a happy 10th birthday 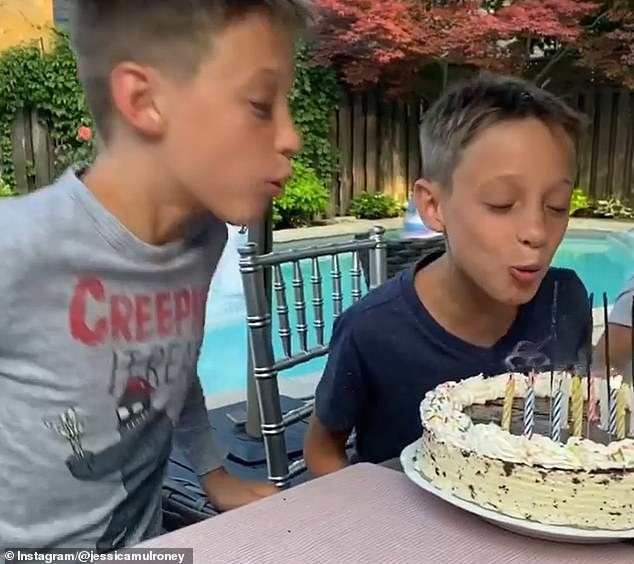 Speaking out: In the caption of the video, which showed her sons Brian and John blowing out the candles on their cake, the 40-year-old admitted she had been ‘in the worst state’ 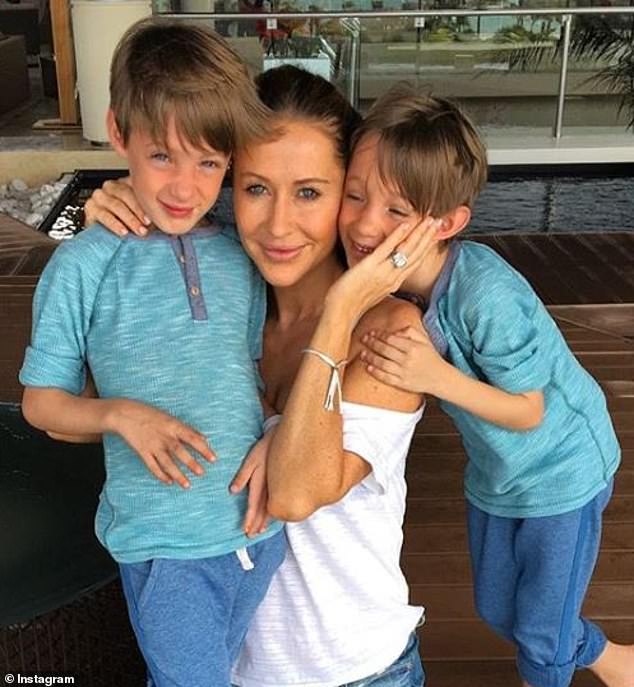 Proud: In the comments of the video, Jessica, fired back at a troll who said she had been ‘dumped’ by pal Meghan Markle in the wake of the race row, insisting it was ‘fake news’

‘Happy 10th to my twin babies,’ Jessica wrote alongside the video, which also features her daughter Isabel.

‘My incredible family have had to witness mom in the worst state. These two boys have not left my side and gave me the will to live and work hard when everything fell apart. They deserve the best birthday.’

She concluded on a positive note, writing: ‘Only up from here.’

But Jessica’s social media return did not stop there – quite the opposite in fact. 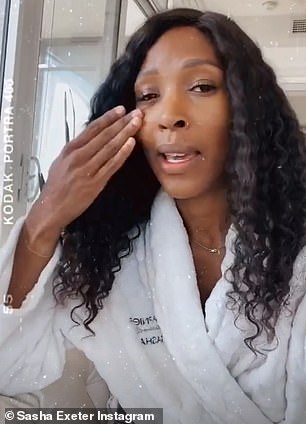 Upset: The stylist took a break from social media after influencer Sasha Exeter claimed that Jessica at ‘threatened her livelihood’ after they became embroiled in an argument over race

Minutes after posting the clip, the stylist began responding to users’ less than positive comments about her bitter fallout with infleuncer Sasha – and her rumored rift with the Duchess of Sussex, who was reported to have cut ties with Jessica in the wake of the racism controversy.

Responding to one commenter who asked whether she was feeling ‘down’ after being ‘dumped’ by Meghan, Jessica branded the rumors ‘fake news’ and begged the trolls to ‘just stop’.

The video post comes two months after Jessica revealed she would be taking a break from social media in order to ‘reflect, learn and listen’, while also issuing a public apology to Sasha, who said that the stylist left her ‘shaking with fear’ after the pair had a private argument over racism.

In June, Sasha posted an emotional video on her Instagram in which she claimed that Jessica had ‘taken offence to a very generic call to action’ posted online, and that the two women had subsequently argued about the importance of ‘speaking up’.

Sasha said she felt Jessica ‘threatened’ her during the argument, claiming the mother-of-three had written to her: ‘I have also spoken to companies and people about the way you have treated me unfairly.

‘You think your voice matters. Well it only matters if you express it with kindness and without shaming people who are simply trying to learn. Good luck.’

Jessica commented on the video to apologize for her behavior, writing that she was ‘unequivocally sorry’.

‘As I told you privately, I have lived a very public and personal experience with my closest friend where race was front and centre. It was deeply educational,’ she wrote.

However the comment, and the official apology that Jessica subsequently posted on her own account, did little to stem the furious backlash against the stylist, who faced a barrage of angry comments – as well as multiple job losses as a result of the controversy.

Privately, after their row over Mulroney not using her platform enough to promote Black Lives Matter:’I have also spoken to companies and people about the way you have treated me unfairly.

‘You think your voice matters. Well it only matters if you express it with kindness and without shaming people who are simply trying to learn. Good luck.’

Public: ‘You are right when you say “this s**t needs to stop.” As leaders, we need to join hands and call out wrongs.

I know we have different experience. And that is something that, even in the course of a heated argument, I need to acknowledge and understand.

I am unequivocally sorry for not doing that with you, and for any hurt I caused.

As I told you privately, I have lived a very public and personal experience with my closest friend where race was front and centre.

It was deeply educational. I learned a lot from that. I promise to continue to learn and listen on how I can use my privilege to elevate and support black voices.

Perhaps most damaging and upsetting for Jessica however was the reported loss of her friendship with the Duchess of Sussex, who, DailyMail.com exclusively reported, was left ‘mortified’ by the scandal and told her close friends that she felt she could ‘no longer be associated’ with the stylist.

‘Meghan is absolutely mortified that she’s been dragged into this complete mess. She said Jessica is in no way a racist, but the way she handled the situation [with Sasha] was tone-deaf and heartbreaking,’ a close friend of Meghan’s said.

‘Meghan said friends reflect friends and because of what’s at stake she can no longer be associated with Jessica, at least not in public. She has to do what she has to do in order to preserve her dignity and her own reputation,’ the source added, admitting that they ‘wouldn’t be surprised’ if the controversy was the ‘beginning of the end of their friendship’.

It appears as though things may be on the mend for the two women however – at least if Jessica’s ‘fake news’ comment is anything to go by.

But her friendship with Meghan was not the only aspect of her life that suffered as a result of the controversy.

Having quickly shot to fame thanks to her close friendship with the Duchess of Sussex, Jessica’s fall from grace was even swifter.

DailyMail.com exclusively revealed that ABC had quickly severed ties with her, confirming that Jessica would not be returning to her occasional role as a fashion contributor on Good Morning America.

Canadian TV network CTV also distanced themselves from the stylist, revealing that it was pulling all episodes of her wedding-focused reality show I Do Redo from its platforms ahead of its expected US premiere on Netflix.

She then stepped down from the board of directors of The Shoebox Project, a charity that she founded with her sisters-in-law, Caroline, Vanessa, and Katy Mulroney.

In a statement shared on Instagram, the charity said: ‘Jessica Mulroney is a founding member of The Shoebox Project and she has dedicated herself to its growth and success over the years, for which we are very grateful.

‘In light of recent events, the charity supports Jessica’s decision to step away from the Board of Directors.’

Jessica’s husband Ben – the son of former Canadian Prime Minister Brian Mulroney – then stepped down from his role as the host of CTV’s celebrity news show ‘etalk’, a position that he had held for 18 years.