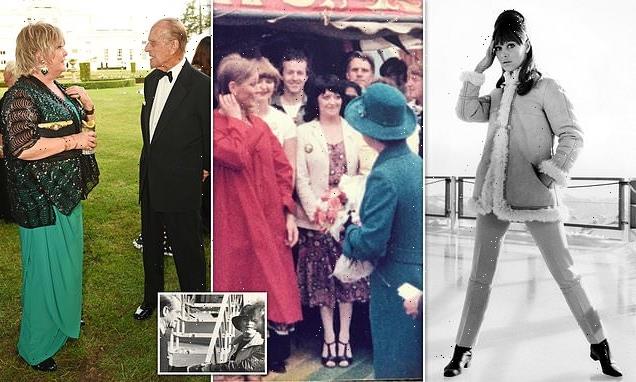 Bond Girl Jenny Hanley shares her memories of interviewing the royals for TV – from Princess Anne preferring horses to children, Charles’ request for gin to warm up and Prince Philip joking so much the footage was unusable

From having the tissue she offered to the Queen confiscated to attempting to warm Prince Charles with a bottle of gin on a cold day of filming, Jenny Hanley has revealed the hilariously awkward situations she’s had with the royal family.

The 74-year-old, who is now a presenter on Boom Radio, is best known as  Bond Girl and for presenting children’s show Magpie throughout the 1970s, which led to some memorable moments with the royals when she interviewed them for the programme.

She admitted to making a faux pas during a live broadcast of Magpie from Hyde Park in 1979 by handing the Queen a tissue when she sneezed, while Prince Philip and Princess Anne’s sense of humour have also left her in hysterics.

Jenny, who lives in London, told how her first faux pas came after mistaking the Queen for a child, saying: ‘We were doing a live Magpie broadcast from Hyde Park for the biggest children’s party in the world, and Her Majesty the Queen and Prince Philip arrived. 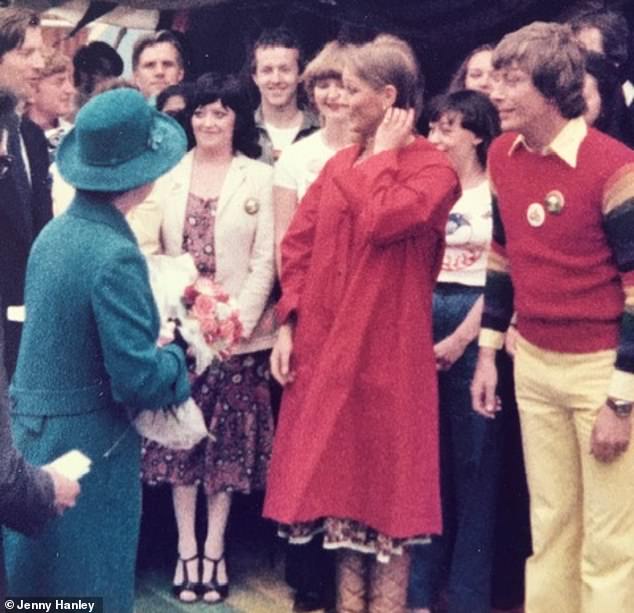 Jenny Hanley, 74, who lives in London, has revealed a selection of hilarious moments from her encounters with the royal family – including when she offered the Queen a tissue (pictured) after she sneezed during a live broadcast in 1979

‘I was in the children’s television tent making sure the children and guests were happy, because we were going to come to me, live, once the royal party arrived.

‘I was talking to the children and somebody behind me sneezed, so I took a tissue from my pocket – when you’re working with children you always have a tissue at hand – put it behind me and said ‘bless you’.

‘At which point a lovely laughing male voice, which was Prince Philip, said ‘that’s never happened before’.

‘I had tried to try to pass a tissue to Her Majesty, who had unfortunately sneezed!

‘There was laughter all round and the security guard took the tissue – I think perhaps you can see it in the photo. And we just go on with the show. It was a lovely happy time.

‘The Queen was brilliant. She walked miles that day, visiting everybody which was wonderful.’ 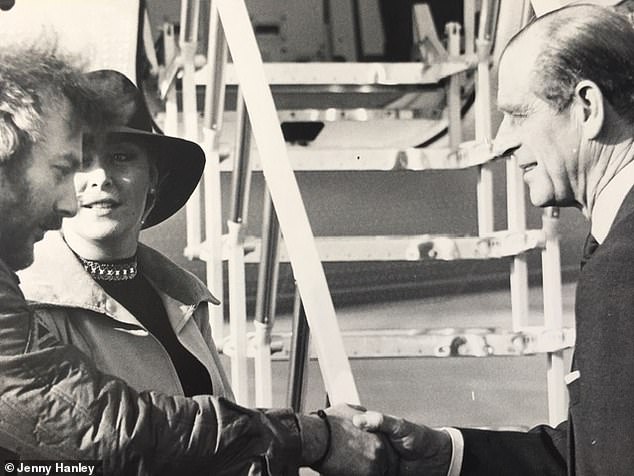 Jenny said Prince Philip was in such a ‘jovial mood’ during a flight from Northolt to Heathrow that the footage couldn’t be used. Pictured: Jenny introducing Magpie director Tim Jones to Prince Philip before the flight

Ex-Bond girl Jenny is the daughter of actress Dinah Sheridan, who played the mother in the Railway Children and her grandparents are Lisa and Jimmie Sheridan.

Lisa was a portrait photographer who worked under the professional name of Studio Lisa. She was given Queen Elizabeth’s permission to publish a book of photos of the future Queen Elizabeth II with her sister Princess Margaret in 1940.

Boom presenter Jenny reflected on her experience with the Queen’s late husband who she was stunned to find out knew her family, saying:  ‘This photo shows me introducing one of the Magpie directors, Tim Jones, to Prince Philip before we took a flight from Northolt back to Heathrow, with Prince Philip piloting.

‘We filmed him all the way and the piece was going to be used on Magpie.

‘He knew Magpie, and he knew who my grandparents were, and he knew that we had a connection, so he fell into the joke of the whole thing.

‘He joked, “You see those fluffy things in front of us, those are called clouds”. I laughingly thought, “This is not going to be a good flight!”. 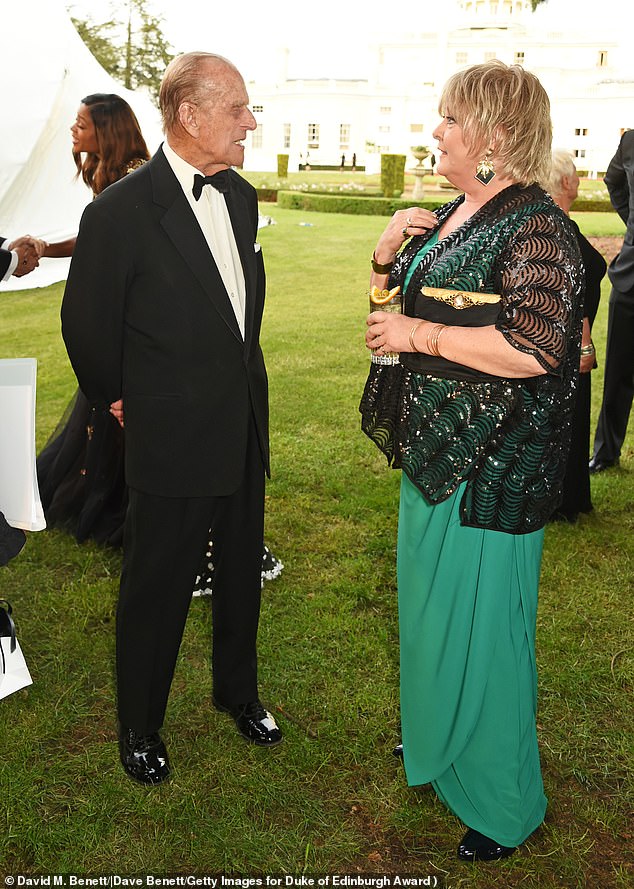 Jenny also met Prince Philip (pictured left in 2016) for drinks at Buckingham Palace and Clarence House, where he drank whisky

‘I’d had to write the questions for my interview and submit them to be accepted – and I’d been told to stick to those questions. And there had been nothing in there about clouds! The flight was just a hoot, basically.

‘I was in the cabin with Prince Philip and the pilot, and he was wonderful. But we couldn’t use any of the footage. We hadn’t taken it seriously, and Prince Phillip was in a very jovial mood.

Revealing Prince Charles’s choice of tipple, Jenny, who starred in On Her Majesty’s Secret Service in 1969, said she was once asked to find the royal a bottle of gin to warm up.

She said: ‘When Prince Charles was on Magpie, it was a filthy day in Wales – rain, wind, mist. 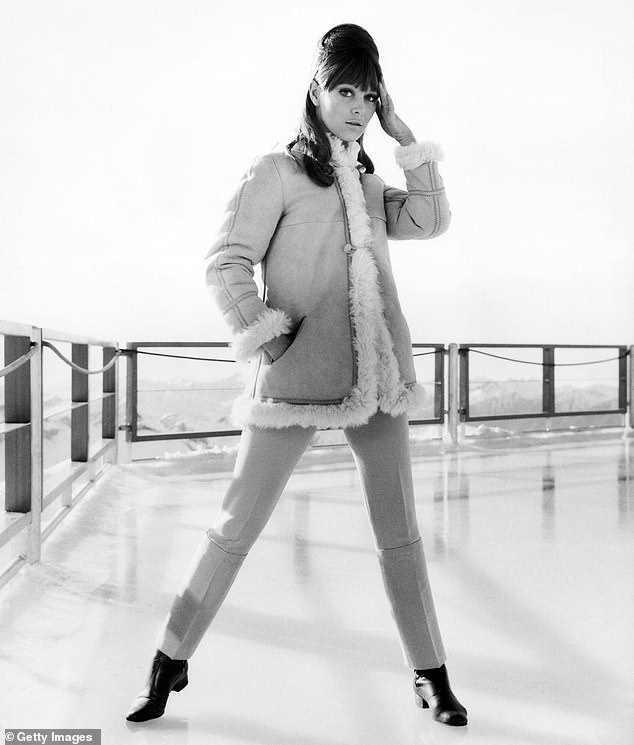 Jenny was left in hysterics after Princess Anne admitted to preferring horses to children when they met at Marwell Zoological Park. Pictured: Jenny on the walkway at the Piz Gloria restaurant in 1969

‘And one of the equerries very gently said would it be possible for us to find a bottle of sloe gin to be put in the back of Prince Charles’ car, which of course, was one of those beautiful cars with a cabinet for drinks and ice.

‘He said would it be possible, so that as he drove away, Prince Charles would be able to warm up in the back of his car. And I thought ‘that’s fair enough! And so a bottle of gin was found…’

The Boom Radio presenter said she also had the opportunity to meet Princess Anne while opening a new area of Marwell Zoological Park, which is where all of their endangered species footage was captured.

‘The Princess Royal came to open it and we were all in a line or meant to be in a line to be introduced to her,’ Jenny said. 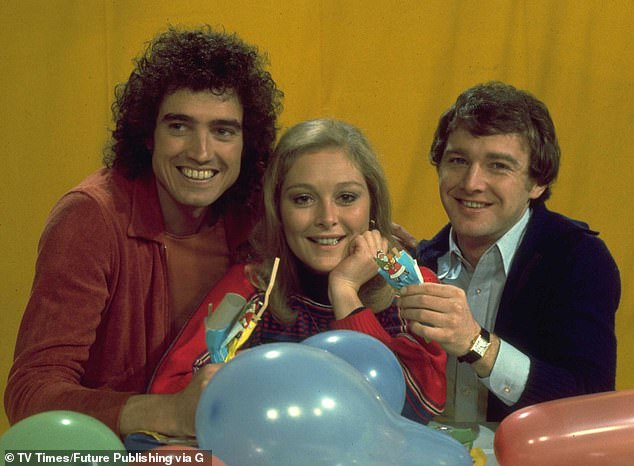 Jenny said ‘you’ve made it’ once you’re having a cucumber sandwich out on the grass at the back of Buckingham Palace. Pictured: Jenny and Magpie co-hosts in 1977

‘I had my two sons with me – a hyperactive three-year-old and a breastfeeding baby, and I was a little bit late getting back from feeding the baby and making sure that the three-year-old wasn’t going to embarrass everybody.

‘I stood in line just as she came to me and she said, looking at my children, ‘I think I prefer horses’. We just had a little smile and a laugh and she said hello to my two sons, and went on down the line. She had a lovely sense of humour.’

Jenny admits that she’s grateful to have had the opportunity to meet many members of the royal family and to attend their events.

Jenny said: ‘The most wonderful thing that happened at one of the Buckingham Palace Garden Parties that I was lucky enough to go to was not the fact of the scones but the cucumber sandwiches. 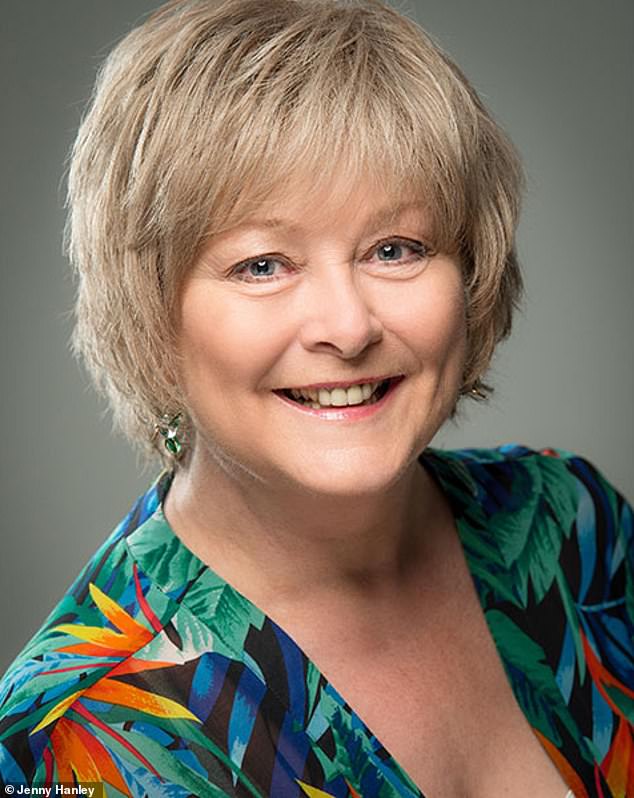 ‘They may be a joke to some people, but when you’ve had a cucumber sandwich out on the grass at the back of Buckingham Palace and the sun is shining and there’s mint in it, then you know you’ve made it!

‘I will never make a cucumber sandwich without chopped mint in it again. None of your American sourdough, thank you. It was just lovely, and I was honoured to be there.’

‘I’ve been to enough royal events to be wowed. It’s fabulous to have met any of them. They are such hard working people.

Jenny reveals her plans for celebrating the Jubilee, adding: ‘I will be joining my neighbours and friends in the area, going from house to house and having cups of tea and having scones and arguments about where you put the jam away and put the cream!’

Jenny Hanley presents a show on Boom Radio every Saturday at 2pm-4pm. Boom is a UK-wide national radio station principally aimed at Baby Boomers aged 60 to 75-years-old. Jenny will be talking about her royal encounters on her show on Saturday, June 4. See boomradiouk.com/jenny-hanley.