Remember Jennifer Lopez’s iconic and unbelievably legendary green Versace dress from the 2000 Grammys? Well her look at the 2019 Grammys is quite different from that, but still makes a serious statement, nonetheless. J.Lo’s 2019 Grammys dress is a white gown with a high neckline, studded embroidery across the neck and chest, and the best part? She paired it with a major, oversized, wide-brimmed white hat that is almost bigger than my tiny NYC apartment (which isn’t saying much – but I digress.)

J.Lo graced the Grammys’ red carpet alongside bae Alex Rodriguez, and both of their entire looks were so stunning that it’s almost like they were waiting for tonight to stunt on us like this.

J.Lo’s white sleeveless dress has a high, multi-layered bedazzled neckline, is sleeveless, and has two large studded circular designs emblazoned across the chest. The floor-length gown has a knee-high slit in the back of the dress that is embroidered with a large, gold chain.

Along with the wide-brim hat (that also has a large gold chain around the base of the hat), J.Lo paired the glistening gown with a small, square-shaped white clutch, a diamond bracelet, and purple studded earrings. 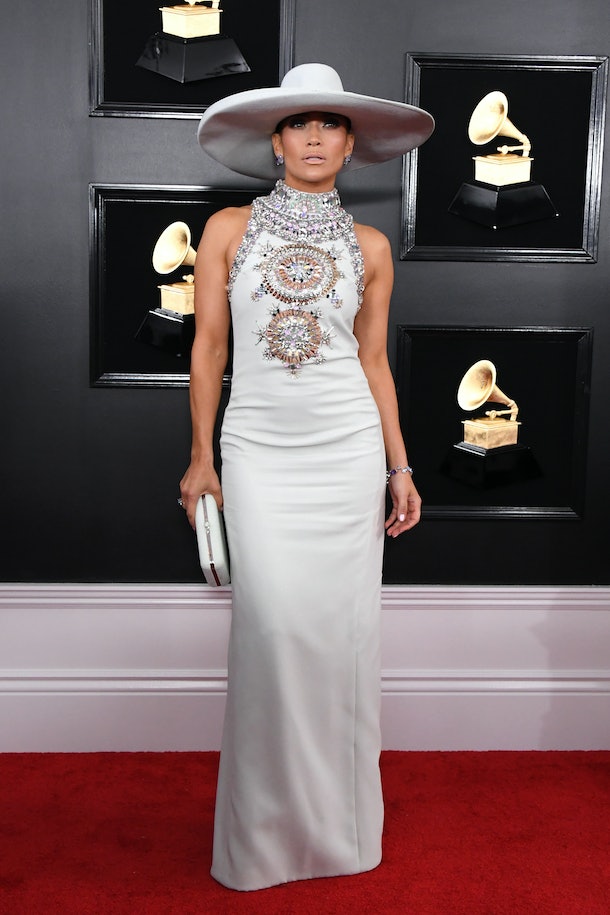 As far as her beauty beat goes, if there was one aspect of her Grammys look that can compete with the hat, it’s her waist-grazing ponytail. The actress-singer wore her caramel-colored locks tied to the back in a low, luscious, and unbelievably long ponytail that almost stole the show and probably had you questioning whether or not it was actually Rapunzel that you saw on the red carpet.

For her makeup look, J.Lo went with a nudish pink gloss, a serious bronzed highlight, charcoal eyelids, and super luscious, thick black lashes that almost touched her eyebrows. So basically, one could say that J.Lo’s motto for her Grammys look might’ve been "the bolder, the better." 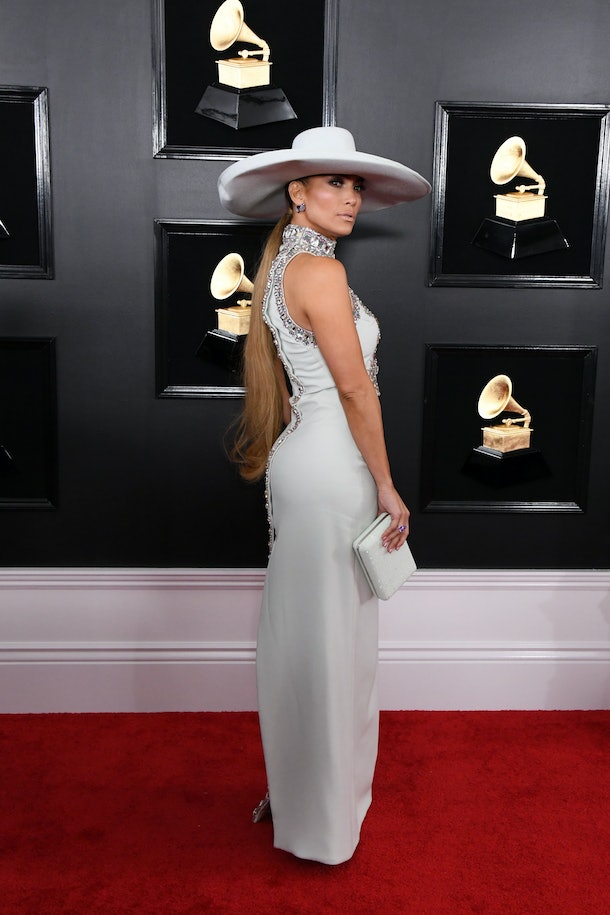 Although the singer isn’t up for an award this year, it’s clear she came to slay regardless. And as did her boo. Alex Rodriguez’s Grammys look looks like a chic oil slick. The former baseball player wore a blazer that had swirls of magenta, black, and teal, thick black lapels, and he topped it off with a large black bow tie. Rodriguez completed the look with with black slacks, and shiny black shoes.

Prior to hitting the red carpet, ARod posted an image to his personal Instagram of both himself and J.Lo on the way to the Grammys with a caption that reads "Bringing back the pink suit! … sort of. Who is more flashy tonight? Me or Jen? #grammys" totally acknowledging that both of them are rocking eye-catching looks. Equally as eye-catching, yet equally as amazing. 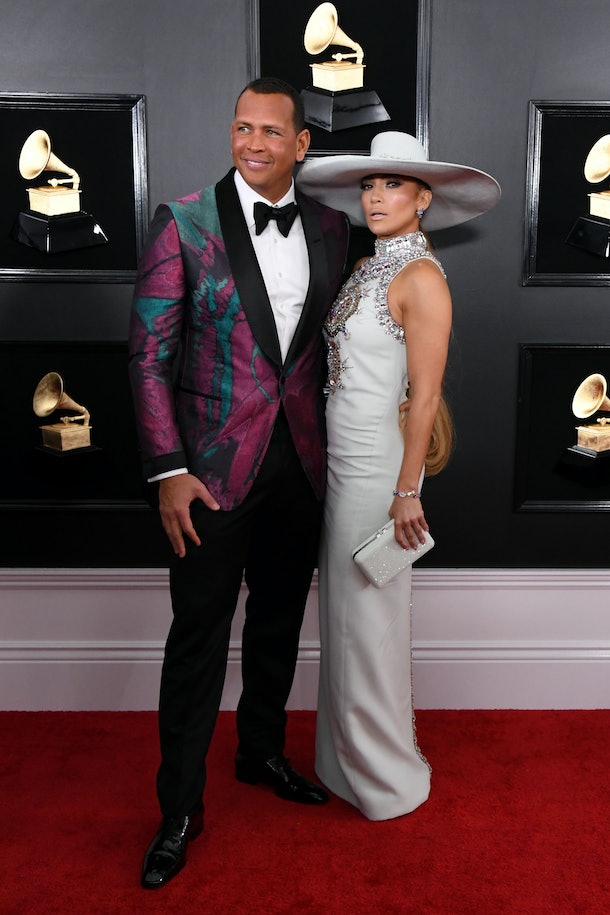 The best part of the couple’s pre-Grammys IG pic, however, is the fact that you can see a person (likely from J.Lo’s glam squad) holding her ponytail in a loose loop, which was probably so she didn’t crease her locks. That is serious dedication, people.

Even though J.Lo is not up for an award at the 2019 Grammys, she’s certainly up there on the best-dressed list, thanks to the glistening white frock that she chose to don.