Ugh, could these two get any more blissful? They’re like, cavity-level sweet, and clearly a perfect match. Not only that, but Jennifer Lopez and Alex Rodriguez’s kids get along brilliantly too, the couple revealed in a new interview with People, which has pretty much made blending their respective families a piece of cake.

Lopez and Rodriguez have only been dating for a little more than a year and a half now, but they come off like a couple who’ve been together for most of their lives. These days, it’s rare to see one of the stars without the other by their side, and it seems as if their children— Lopez’s 10-year-old twins, Max and Emme, and Rodriguez’s Natasha, 14, and Ella, 10 — have formed a special bond of their own.

"Our kids have become best friends and that keeps us both grounded and appreciative," Rodriguez told People. "We couldn’t have asked for anything better than the four of them getting along as they do."

Lopez echoed her beau’s sentiments during the same interview, adding, 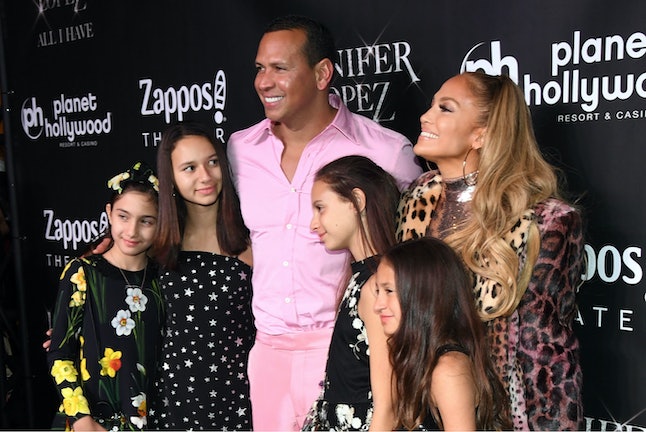 It sounds like they’re all one big, happy family already, but don’t expect Lopez and Rodriguez to tie the knot any time soon. During an interview with Good Morning America on June 11, Lopez told the hosts that they’re content the way they are.

"We have to take our time," she said. "I’ve made plenty of mistakes in my past and … we’re mature now." The 49-year-old continued to explain,

Makes sense, right? Why rush it? Sure, weddings are great or whatever, but both Rodriguez and Lopez have been married before — in Lopez’s case, three times. They’ve lived, they’ve loved, they’ve grown from each experience, and now it seems like the couple feels plenty secure without having to walk down the aisle.

"Everything feels healthy and different," Lopez confessed to People. "We bring something to each other’s lives that is profound, good and healthy." She continued,

Lopez and Rodriguez are definitely lucky, that’s for sure. You know who else is lucky, though? All of their adoring fans, who get to bask in their ever-present love-fest and soak up their positive vibes. The way the couple’s two families have so seamlessly come together just warms the heart, doesn’t it?