Nobody freak out, but there might be drama in YouTube’s famous Sister Squad. Ever since sister Emma Chamberlain unfollowed, well, basically everybody on Instagram, people have been worried there is bad blood between her and her YouTube besties, James Charles and the Dolan twins. However, I think James Charles’ reaction to Emma Chamberlain unfollowing the Sister Squad proves everything is status quo, mainly because he is as sarcastic and playful as ever.

If you haven’t heard of the Sister Squad yet, let me fill you in. The Sister Squad is made up of four young YouTube celebrities. They are makeup artist James Charles, YouTube-ing twins Grayson and Ethan Dolan, and YouTube personality Emma Chamberlain. The Sister Squad formed via Charles, who connected with the Dolan twins and Chamberlain separately before linking them all together in Los Angeles. He explained in an interview with Xavier Brinkman he connected with Ethan and Grayson by "literally leaving thirsty comments on their Instagram pictures" and eventually doing their Halloween makeup. As for Chamberlain, Charles explained,

As an example of their love, here they are buying each other true dream (read: expensive AF) Christmas gifts during the holidays in 2018.

Now, you guys kind of get their squad vibe.

So, you can imagine how much of a shock it was when Chamberlain proclaimed she was going on a social media detox and unfollowed everyone, including her sisters Grayson, Ethan, and James. Today, she only follows 17 accounts and they are all fan accounts.

Still, Chamberlain ensured fans there was no drama and that she just needed a little social media detox. She explained via her Instagram Story,

She also posted this: 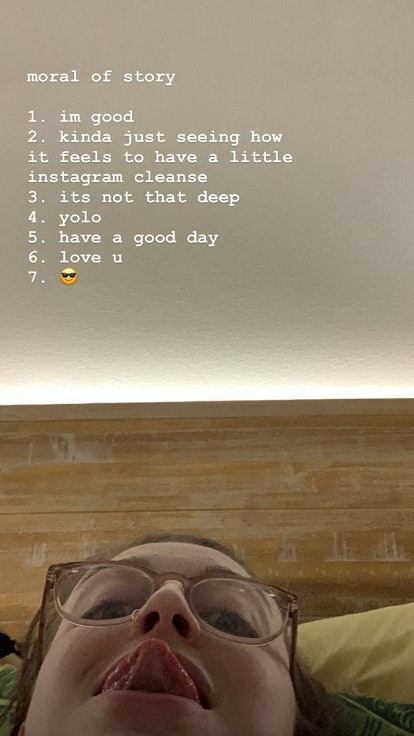 So, Chamberlain jumped on Twitter to talk about how the social media detox is going with this post: "i keep going on instagram to see what everyones doing and then remember i follow 17 people omg whoops."

Charles responded, "I posted a beautiful makeup look today but u wouldn’t know."

Sure, his tone might be sassy but, knowing their Sister Squad dynamic, fans can safely assume his response is all in good fun — especially because Chamberlain responded like this: "ill go check it out anyways. because i love u!"

I’m sure this is all part of the Sister Squad’s rich, young, and famous journey. (Right? Is that how this works?)