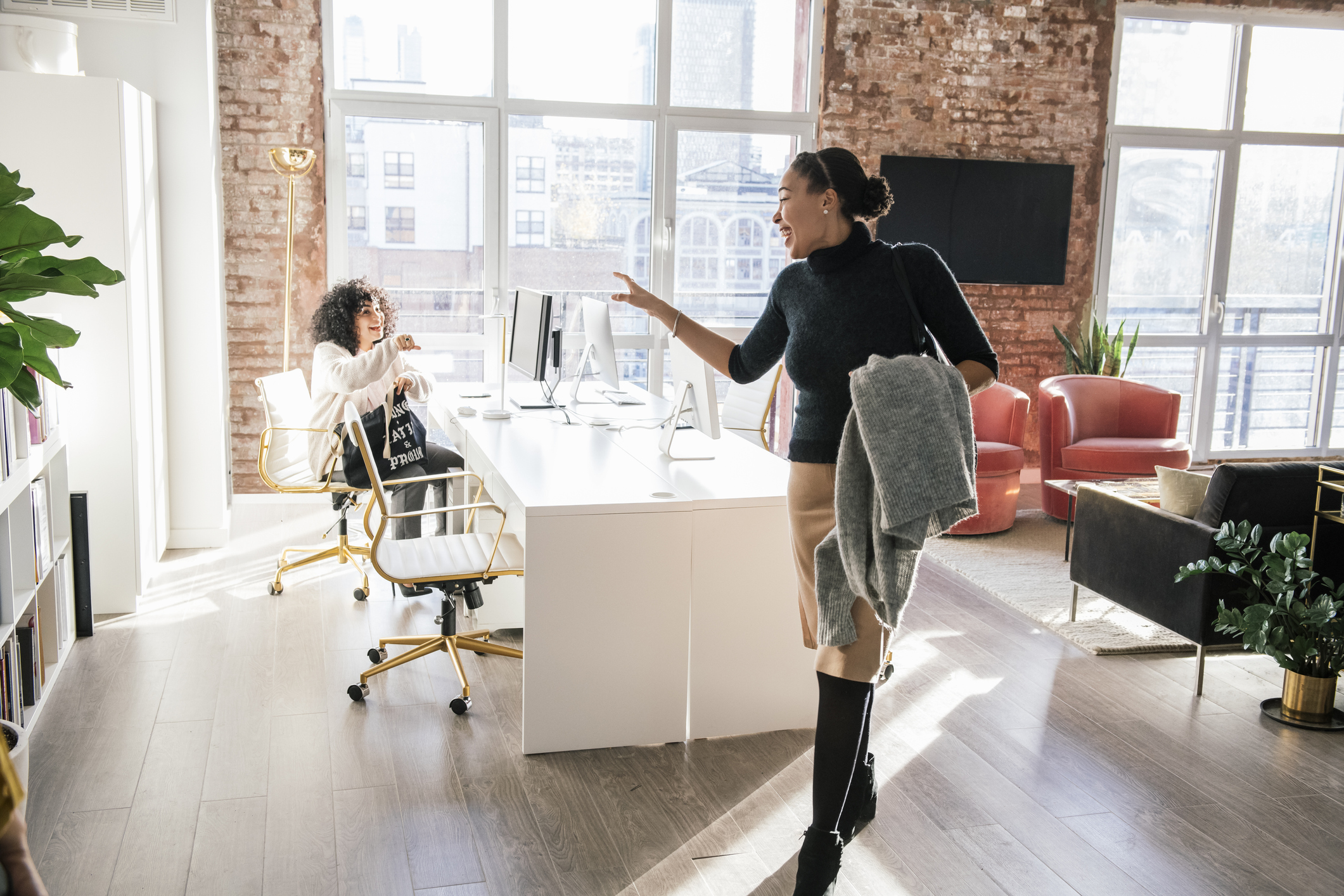 Coming out the other side of a bank holiday weekend always has us lusting after a shorter working week.

‘Life would be so much better if we had a three day weekend,’ we think to ourselves, ruminating over who decided that a five-day working week should be standard, and daydreaming about what we’d use the extra day for.

This is a dream that’s getting closer to a reality in the UK.

Starting from now, 70 companies across the UK are set to take part in a pilot of a four-day week.

The trial, which will include more than 3,300 workers, is the biggest ever of its kind and will see no loss in pay for employees.

Instead, workers will be asked to maintain 100% productivity for 80% of their time.

From a local fish and chip shop to large corporate companies, a wide range of businesses are taking part.

With research showing that almost 80% of UK workers have experienced burnout, and 35% reporting high or extreme levels, could this be the answer to our problems?

Or could it lead to workers being forced to do longer hours and cram their five-day workload into four days, leading to increased stress and having the opposite effect?

Well, potentially yes – but, importantly, not if it’s handled and planned properly.

Bex Spiller is founder of the Anti-Burnout Club and an expert in stress, burnout and resilience.

She says: ‘We have seen during trials in different countries that a four-day working week can have some pretty incredible benefits.

‘These include employees feeling happier and healthier, with more time to focus on hobbies, looking after their health, connection with others and creative pursuits.

‘It can also lead to an increase in productivity, or at the very least, the same level of productivity.’

She also suggests that benefits can include ‘reducing stress levels and potentially reducing the risk of burnout’. This in turn, could ‘reduce costs for organisations’, with fewer people off sick due to overwhelm in the workplace.

She states other potential benefits as reducing the gender pay gap, being beneficial for the environment due to reduced commuting.

Will a four-day working week ease our collective burnout?

As we’ve all gone through (and are still going through) a pandemic, the usual pressures of work have been magnified for many.

From the ‘great resignation’ to decreased levels of job security and satisfaction, many of us have felt the pressures of the job like never before.

But benefits have come, with the last couple of years seeing a rise in flexible and hybrid working, with millions of workers proving they can do their job just as well at home.

And having greater control over our work/life balance is the first step of keeping burnout at bay.

‘One of the biggest causes (and symptoms) of burnout we see at The Anti-Burnout Club is overwhelm,’ says Bex.

‘These days, we all have far too much on our plates at once and it can feel almost impossible to keep on top of it all.

‘By reducing the working week down, people will have that extra breathing space to tick things off their to-do lists, while also having time to focus on their hobbies, health, social lives, and anything else that brings them joy.’

Whether it’s resolving outside pressures of life that can be draining on our attention or energy, or giving more time for energising activities, this will contribute to improved mental, physical and emotional wellbeing, explains Lara Cullen, Executive Coach and founder of The People Person.

‘For parents with childcare responsibilities that can be one less day of paying for childcare, or one more day when they can do the school run.’

On an individual level, you can prevent burnout by paying attention to when you are close to getting overloaded.

Here are some tips from productivity expert, Moyra Scott, on things you can do to help yourself prevent burnout

‘One day less in the office also means one day less of travel costs and time stuck in traffic or on public transport – and given the current squeeze on people financially, this can make a big difference to wellbeing.’

She adds: ‘It’s well documented that burnout levels across the globe are at their highest levels ever, especially since the pandemic.

‘Giving people more time to switch off and more mental distance from the demands of their jobs helps to tip the balance somewhat.

‘For employers, this means that when they are at work they are more refreshed, present and have more energy.’

Could a four-day working week lead to increased productivity?

‘One piece of research carried out by Microsoft in Japan in 2019 showed a 40% increase in productivity when employees cut down from a five to a 4fourday week while maintaining salary,’ Lara tells Metro.co.uk.

‘Even intuitively, we all know that a simple task takes longer to do when we are tired versus when we are not.

‘Overworking ourselves tends to have a counter-productive effect with tasks taking longer and more mistakes being made.’

Bex adds:  ‘As humans, we’re not designed to stay focused and productive for long days and weeks – and there have been plenty of people campaigning for shorter working hours because of this.

‘Giving our brains time to switch off and reset can actually help improve productivity which is a win-win.’

Flexible working or a four-day week?

Paula Allen is a Global Leader and Senior Vice-President of Research and Total Wellbeing at LifeWorks.

She believes that a four-day week doesn’t solve the issue around burnout and suggests that, in fact, flexible hours would work better.

There is, she says, a danger that a shorter working week might end up with the four days being crammed full, with no breathing space.

After all, is the goal of 100% productivity for 80% of the time really feasible?

‘While the reasons for adopting a four-day working week include improved efficiency, productivity, and employee retention, others harbour concerns squeezing five days of work into four days can have a detrimental impact on our mental health and wellbeing,’ she points out.

‘By reducing hours, this can effectively mean working harder and longer on the days you are logged in, giving employees less choice, which in turn can lead to added pressure to meet deadlines and increased burnout.’

Some say the introduction of a four-day week addresses the wrong issues.

Paula adds: ‘When we surveyed 2,000 UK workers in our LifeWorks Mental Health Index this month about their wellbeing, Brits actually prioritised having flexible working schedules and freedom in where they work rather than simply reduced hours.

‘In other words, people really want more choice, not less.’

However, Paula points out that the huge positive is these discussions are being driven by a prioritisation of employee wellbeing, and are a welcome adaptation within workplaces.

‘But reducing the working week is not an end in itself,’ she adds.

‘Employers must recognise the landscape has shifted and not lose sight of less radical proposals in the meantime.’

Bex stresses that this simply won’t work for everyone.

‘Those working in roles that are already seeing huge staff shortages (schools, the NHS, carers) are highly unlikely to be able to reap the benefits of a four-day working week without a lot of money being put into recruitment,’ she says.

‘I think it’s really important to highlight that these are also some of the sectors experiencing the highest cases of burnout and so whilst it may be good for some, it could lead to others feeling more exhausted and overwhelmed as they see their friends and family enjoying shorter working weeks.’

What can businesses do to make the four-day working week work for employees?

‘This is the million dollar question,’ says Bex.

‘There is absolutely no point in bringing in a four-day working week if employees are expected to cram those days and actually end up feeling more stressed or overwhelmed.

‘It’s absolutely vital that businesses consider how they can make this work without it becoming overwhelming for employees.

Source: Bex Spiller, founder of the Anti-Burnout Club and an expert in stress, burnout and resilience.

The experts agree that the onus should be on management to make it work, not the employees.

‘It is not enough for workplaces to offer flexible working hours, it’s a policy that needs to be encouraged by management,’ says Paula.

‘If managers are not seen to be embracing flexibility, then it is unlikely those who would benefit from flexible hours will feel they are able to take them.

‘A focus on culture while employees are at work is equally as important as time away from it.

‘If employers are putting too much on employees’ plates then it’s too much, full stop. So, the first port of call is to have an open and honest discussion with a manager.

‘Explain exactly what it is about the workload that’s too much; is it two people’s jobs, is the pressure too much, are the KPIs too high?

‘Gather your evidence and present it to your manager as soon as you can’.