Irwin Hollander, an artist and a master printer who persuaded Willem de Kooning, Robert Motherwell and other Abstract Expressionist painters to try their hands at lithography in his East Village workshop, died on Nov. 16 in Brooklyn. He was 90.

His death was confirmed by his son Mark, who said Mr. Hollander had suffered a stroke several years ago and had continuing heart problems.

Starting out as a hopeful young artist who became a commercial lithographer to survive, Mr. Hollander was part of the revival of fine art printing and especially lithography that took hold in the United States around 1960. He often said that his main goal was “to be of service” to artists.

He was best known for convincing de Kooning and Motherwell, who had never been deeply involved with printmaking, that their gestural, improvisational styles would adapt well to lithography, perhaps the most forgiving of print mediums. In both cases the results were celebrated; in fact, several of the de Kooning lithographs that Mr. Hollander published in 1971 were first exhibited that year in their own show at the Museum of Modern Art in New York.

Irwin Hollander was born on the Lower East Side of Manhattan on Nov. 30, 1927, to Henry and Ida (Burak) Hollander. His father was a taxi driver, and his mother worked in the garment industry.

The family soon moved to Williamsburg, Brooklyn, where Irwin befriended Melvin Kaminsky, who would become known to the world as Mel Brooks. Irwin was 6 when his father died. His mother later married Nat Stern, who, like her, was in the needle trades and active in the garment workers’ union.

Disliking school, Irwin, at 14, dropped out in the eighth grade and spent the next two years on his own in Hartford, out of the reach of New York City truant officers.

Upon his return, he attended the School of Industrial Art, a technical high school in Manhattan (now the High School of Art and Design), and spent two years at Washington Irving High School, also in Manhattan, studying fashion illustration, life drawing and photography.

By 1945 he had quit school altogether and, with a cousin’s help, gotten a job at R. H. Macy’s taking photographs for advertisements.

Mr. Hollander joined the Army in 1946, serving in the Pacific with a photography technical unit on Guam. He made money running a dice game, but also started reading books.

Then he met a “magician on the beach,” as described him — a Danish artist making watercolors of Guam’s tropical setting.

“I had never seen anyone paint before,” Mr. Hollander said in an oral history in 1970 for the Archives of American Art, “and that was just too much.”

He got his own paint set and started using it.

After leaving the Army, Mr. Hollander used the G.I. Bill to attend the Brooklyn Museum Art School for a year, the Esmeralda National School of Painting, Sculpture and Printmaking in Mexico City, and the Art Students League in Manhattan, where his favorite teacher was the painter Edwin Dickinson (1891-1978). 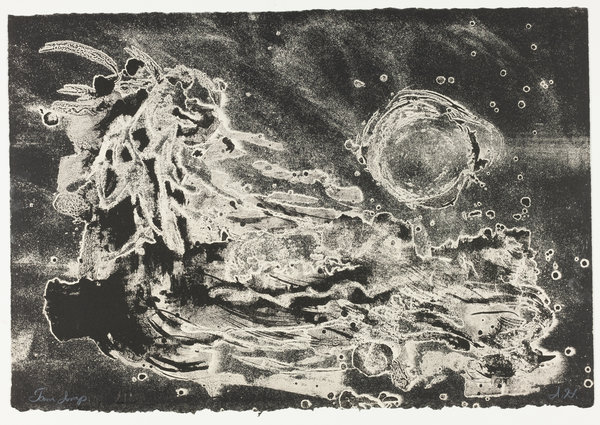 Realizing he could not live off his art, Mr. Hollander decided to try commercial printing, but every time he got a job he would be fired after one day for lack of skill. Still, the work was good training: He ultimately learned enough to hold down a steady job in commercial lithography and earn a journeyman’s card.

In 1955, he married Nina Serser, a social worker whom he had met at a socialist tennis camp in New Jersey. A fire displaced the couple from their East First Street apartment shortly after the birth of their first child, so they moved to California, settling in San Diego.

In San Diego, Mr. Hollander worked for a commercial lithography company and fell in with the city’s art scene. The company agreed to let him use the equipment at night to work with artists, making mostly woodblocks with them. But he also printed two books by the artist and poet Guy Williams, starting with “The Painter’s Notebook” in 1961.

That year, Mr. Hollander’s nocturnal efforts came to the attention of June Wayne, whose newly opened Tamarind Lithography Workshop in Los Angeles would play a key role in introducing American postwar artists to lithography and in training printers. Within a year he was the first master printer trained at Tamarind. As he said in his oral history, “I absolutely fell in love with the idea of working closely with artists all day.”

He returned to New York in 1964 and opened Hollander’s Workshop, at 90 East 10th St., in a third-floor space that had been vacated by the sculptor Philip Pavia. His press was built, with Mr. Hollander’s help, by Charles Brand, who worked nearby and was known primarily for his etching presses.

When the building’s ground floor became available, Mr. Hollander rented it as a display and selling space overseen by his wife. The first print the workshop published was by the artist Leonard Baskin.

Mr. Hollander and his wife divorced in 1970. In addition to his son Mark, he is survived by two other sons, Eric and Kurt; a daughter, Carla Van Order; and seven grandchildren.

Among Mr. Hollander’s early triumphs in New York were a portfolio of lithographs and etchings by Motherwell published in 1966. The next year, Mr. Hollander published “Portfolio 9,” which consisted of lithographs by nine artists, including de Kooning, Roy Lichtenstein, Sam Francis, Ellsworth Kelly, Richard Lindner and Louise Nevelson. He went on to work with several of them individually.

Few people understood — and could explain as enticingly — the potential of lithography as well as Mr. Hollander. He also excelled in his use of tusche, a liquid that, when poured on a lithographic stone or plate, can leave a flowing motif that can be printed; it was especially used by Motherwell and Francis.

Mr. Hollander was known for the variety of his blacks, which reflected his skill in inking printing surfaces. Some of this ability was apparent in the grays and silvers of “Vesta,” a lithograph of his own that he made while training at Tamarind in 1962.

His most unusual collaboration was with the composer John Cage, who began working with him in 1969 after Mr. Hollander had moved his workshop to 195 Chrystie St. on the Lower East Side, added two more presses and gone into partnership with Fred Genis, a Dutch master printer.

For his “Plexigram,” Cage used the I-Ching, a Chinese numerical system, to place words, letters and images on pieces of clear Plexiglas (requiring a switch to silk-screen for printing). Their motifs were further jumbled when the Plexiglas pieces were layered together in an open box.

As the world of artists’ prints became larger, more complex and more expensive, Mr. Hollander tired of it. He closed Hollander’s Workshop in 1972 and taught lithography for several years at the Cranbrook Academy of Art in Bloomfield Hills, Mich. He later moved to Wells Bridge, N.Y., a hamlet in Otsego County along the Susquehanna River, and there concentrated on his own art, which he exhibited in the area.

In his honor, the Sragow Gallery in Manhattan has mounted a display of his artists’ proofs, which it represents, at its space on West 30th Street.