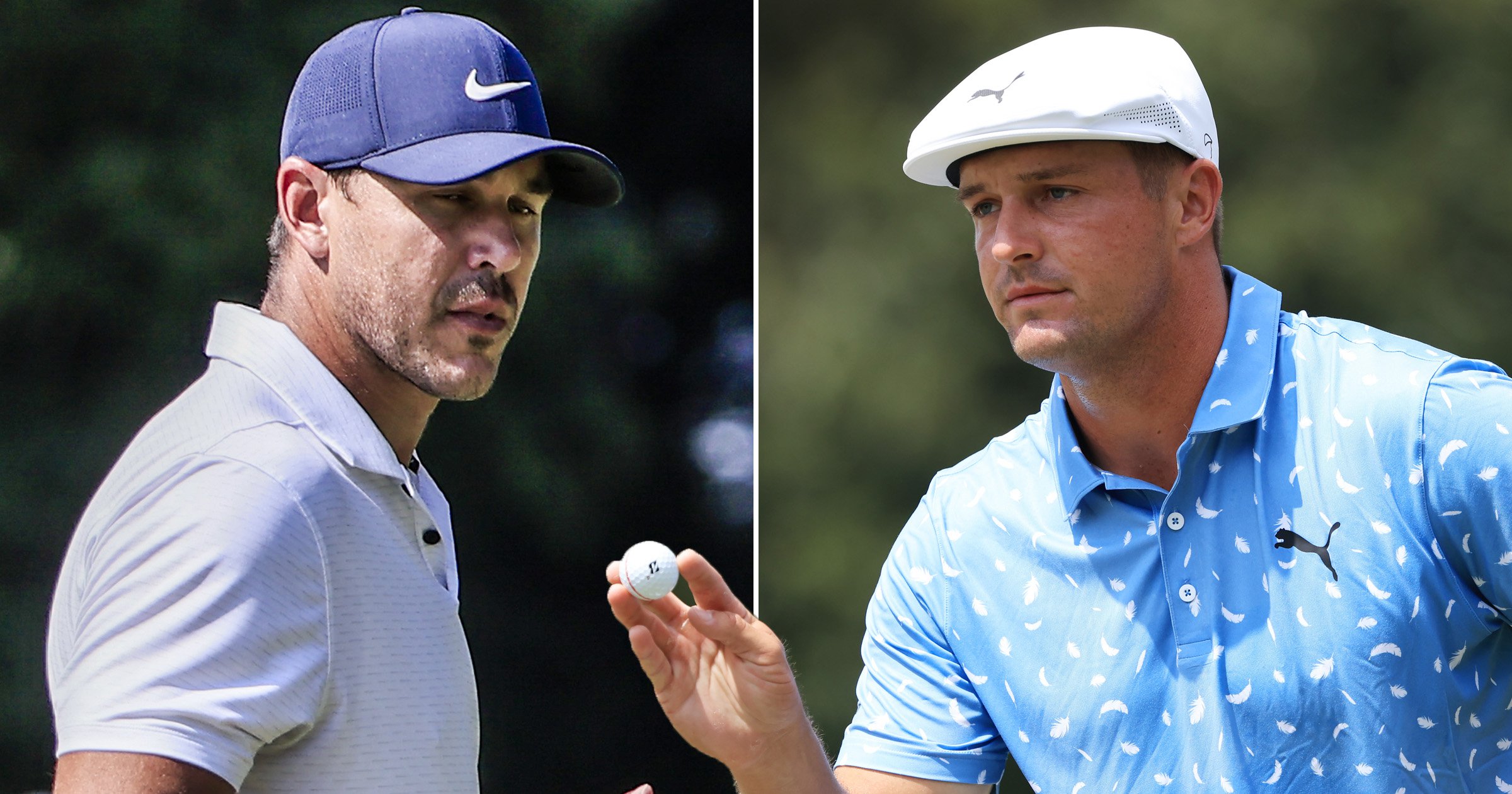 There will be no shortage of storylines at the Ryder Cup this week, but an ongoing feud between American teammates Brooks Koepka and Bryson DeChambeau is the one attracting the majority attention going into the event.

The pair do not get on and their spat has been made very public over the last couple of years, with tensions bubbling on social media and at tournaments.

They will be taking on Team Europe together this week, but will be kept apart in the pairings as their rivalry rumbles on.

The feud seemed to begin in early 2019 when Koepka commented on DeChambeau’s slow play, which was garnering a lot of attention at the time.

Koepka said he didn’t ‘understand how it takes a minute and 20 seconds to hit a golf ball’ and added that watching DeChambeau ‘really drives me nuts’.

This led to an incident later that year at The Northern Trust tournament when DeChambeau confronted Koepka’s caddie Ricky Elliott.

‘He walked up to Ricky and said “You tell your man if he’s got something to say, say it to myself’,” Koepka explained. ‘I thought that was ironic because he went straight to Ricky.

‘Ricky told me when I came out, I hit a few putts and then just walked right over to him. We had a conversation.

‘We both agreed we’d leave each other out of it and wouldn’t mention each other, just kind of let it die off. So then he was playing video games online or whatever and brought my name up and said a few things (about Koepka’s physique), so now it’s fair game.’

The comments about Koepka’s physique came after he posed naked for ESPN’s Body Issue and Dechambeau mocked his appearance.

‘In [ESPN’s] Body Issue he didn’t even have any abs, I can tell you that,’ DeChambeau said on a live Twitch stream. ‘I got some abs.’

Koepka unleashed a fantastic reply on Twitter, with a picture of his four major titles and a caption: ‘You were right @b_dechambeau I am 2 short of a 6 pack!’

Brooks stopped the interview with the Golf Channel, rolled his eyes and said: ‘I f***ing…I lost my train of thought, hearing that bull***t. F***ing christ.’

The video of the interview did not make the channel but was leaked and went viral on social media.

There were barbs to come from Koepka in July of this year as he mocked DeChambeau’s split with his caddie Tim Tucker and his complaints about his driver at The Open.

Koepka made a song and dance of praising his own caddie after the DeChambeau-Tucker split and when asked about his own Open performance after his rival’s driver complaints, said: ‘Drove the ball great, love my driver.’

‘I don’t view it as an issue. I don’t think he does. Like I said, I can put anything aside for a team, business, whatever, just to get the job done.’

DeChambeau also insisted there would be no issues at the Ryder Cup, even suggesting that it would be funny if he and Koepka played together as it would create ‘a little interesting vibe for the guys we’re playing against’.

US captain Steve Stricker admits that he is unlikely to put the two together in a pair, but has also played down the spat.

‘It’s a non-issue, really, for me and the team,” Stricker said in on Monday. ‘We got together a few weeks ago [with his five vice-captains] and I’ve had conversations with them both. They have assured me it’s not going to be an issue. I have no worries whatsoever.

‘Will we pair them together? I don’t think so at this point but things could change.

‘But again, I had a dinner; they all showed up. We had great conversation, great talks. So I’m not seeing it as an issue at all and they are completely on board.’

DeChambeau’s coach, Mike Schy, has also claimed that his player wants to put the feud in the past and move on from any more drama between the pair.

‘Whether or not they are both doing it to maximise their global profile, Bryson wants it over,’ Schy told the Times. ‘Move on. The bottom line is two big egos.’

The Ryder Cup gets underway at Whistling Straits in Wisconsin on Friday 24 September.