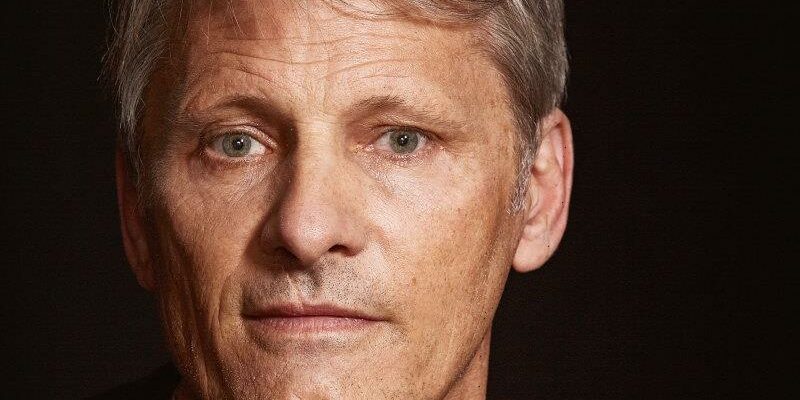 Viggo Mortensen has the morning off from shooting the Hollywood movie Thirteen Lives, director Ron Howard’s take on the remarkable real-life rescue of a young football team from a flooded Thai cave in 2018, in Queensland.

The three-time Oscar nominated actor is keen to talk about his first movie as writer-director, Falling, a deeply personal drama that came from thoughts jotted down on a long flight home from his mother’s funeral in 2015. It reflects the devastating impact that dementia has had on his family, with both parents, three out of four grandparents, aunts and uncles all affected. 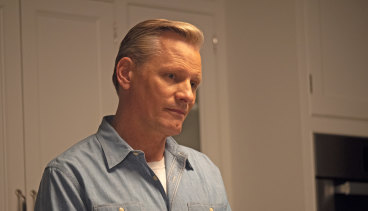 “I was thinking how it’s odd but interesting that there are different versions of the same events”: Viggo Mortensen in Falling, his first film as writer-director. Credit:Transmission

But Mortensen, a serious-minded, one-of-a-kind Hollywood star who is also a poet, photographer, musician, painter, publisher and fluent speaker of French, Spanish and Danish, has some time this morning in late May, so is happy to talk about all sorts of things over Zoom.

Thirteen Lives, for a start.

Mortensen, 63, plays one of the main cave divers in the rescue, Brit Richard Stanton, with Colin Farrell as fellow Brit John Volanthen and Joel Edgerton as Australian anaesthetist Richard Harris. The subterranean equivalent of Howard’s other impossible rescue movie, Apollo 13, has not been easy to shoot in underwater caves built at the Gold Coast studios.

“We’re doing a lot of the diving work,” he says. “It’s fun – I like it a lot – but it wears you out. If we’d been doing what we’re doing now at the beginning, I would’ve thought ‘I don’t know if I can do this’ but we’ve gotten gradually used to sections that are more and more difficult in all these caves and tunnels underwater.

“You get snagged and caught and stuck then trying to transport people through them alive – kids – is a big responsibility. But it’s working. It looks and feels very real.”

To prepare for the movie in Spain amid pandemic travel restrictions – he lives part of the year in Madrid with his longtime partner, Spanish actress Ariadna Gil – Mortensen Zoomed regularly with Stanton in England and joined some Spanish cave divers who took him into a deep and claustrophobic cave, where he had to summon the nerve to squeeze through a tight underwater passage. 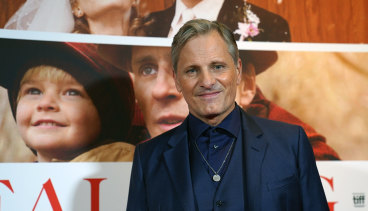 “It’s usually the observers and the caregivers who are more confused than the person who has it”: Viggo Mortensen at the Danish premiere of Falling in Copenhagen.Credit:Emil Helms/Ritzau via AP

During two weeks quarantine on the Gold Coast, he relied on Zoom again to talk to Stanton every day and rehearse with Howard and the other actors.

“They would leave a box – let’s say of my wetsuit and all my gear – at the door,” he says. “I’d pull it inside and try it on and make adjustments and send it back. We prepared the movie in a very unusual way.”

Mortensen, born in New York with a Danish father and American mother, has long been much more than just a handsome actor who often carries the moral weight of a movie. He is the most “present” actor I have ever interviewed – the first time was just before the 2003 world premiere of The Lord of the Rings: The Return of the King when he arrived in an upmarket New Zealand hotel room barefoot and greeted everyone individually, including a surprised waiter. 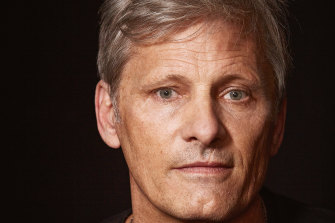 After early unnoticed roles in Woody Allen and Jonathan Demme movies, Mortensen played one of the Amish in Peter Weir’s Witness (1985) then regularly worked with directors with cred in such films as Sean Penn’s The Indian Runner (1991), Brian De Palma’s Carlito’s Way (1993), Jane Campion’s The Portrait of a Lady (1996), Ridley Scott’s GI Jane (1997) and Gus Van Sant’s Psycho (1998).

Then came the movie that made him famous in his early 40s – taking over the role of Aragorn after director Peter Jackson sent another actor home in The Lord of the Rings: The Fellowship of the Ring (2001). In cinemas, hearts beat faster at the sight of a bloodied Aragorn charging into battle on his steed, with Mortensen bringing strength, nobility and humility to the role. 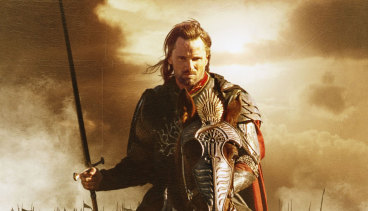 Viggo Mortensen in The Lord of the Rings: The Return of the King.Credit:Roadshow

“Because of its worldwide success, it opened the doors to many other possibilities,” he says.

“I don’t tend to win awards,” Mortensen says. “I tend to get nominated once in a while. And even that was something I was a very late bloomer at.”

His dedication is Daniel Day-Lewis-ish: playing a deaf mute in The Passion of Darkly Noon (1995), he did not speak for the entire shoot, communicating instead by making clicking noises, scribbling notes to the crew and ordering food by pointing. According to co-star Brendan Fraser, his only words were at the end of the shoot when he said: “Thanks everybody, so long”.

Playing an artist in A Perfect Murder (1998), he painted the artworks for the movie himself.

In Wellington for the triumphant debut of The Return of the King, Mortensen had an exhibition of his landscape photographs, read his poems at a charity poetry night, addressed a crowd in Maori and, at a concert with the New Zealand Symphony Orchestra, sung in Elvish. He bought the two horses he’d been riding during the shoot to take home.

As The New York Times noted in 2018, he is perfectly comfortable being naked on screen and his characters in three movies “perform oral sex as if breathing air”.

Mortensen has long wanted to direct a movie but even after Aragorn, he could never attract enough finance for the five or six scripts he had written. 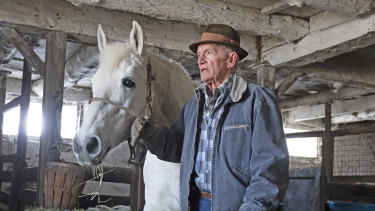 “I got some of the money but not enough to make even a small budget movie,” he says. “And I started working more as an actor. You can’t do both really, or do it well in my opinion. You have to give yourself 100 per cent. One job at a time, each job a success, ideally. That’s the only way.”

With Falling, Mortensen finally raised the funding to shoot one of his scripts, though he had to play a role. It’s an evocative drama about how a gay Californian man, John Peterson (Mortensen), his husband Eric (Terry Chen) and sister Sarah (Laura Linney) cope with his bigoted farmer father Willis (Lance Henriksen) as he suffers dementia.

Mortensen says he wanted to explore memory, communication and forgiveness in a movie that started with the realisation, flying home from his mother’s funeral, that stories told at the wake differed from his own recollection of events.

“I was thinking how it’s odd but interesting that there are different versions of the same events,” he says. “There was also something sweet about remembering all these things and seeing her face and I suppose I didn’t want that to fade.

“I wanted to remember everything that I was feeling and seeing, visualising while sitting on that plane, so I started writing down notes.” 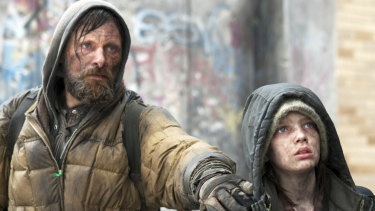 Viggo Mortensen and Kodi Smit-McPhee in The RoadCredit:Roadshow

While his parents split up when he was 11, Mortensen says his father was such a strong personality – part of a generation who grew up in hard times, went through World War II and struggled to express emotion – that he had a lasting impact on his mother.

“It became more about my father,” he says. “It wasn’t the plan, but that’s the way it turned out. But when I watch the movie, the conscience, the centre, the emotional fulcrum of the story, is still the mother.”

Mortensen disagrees with the way dementia was portrayed in The Father (2020), which had Anthony Hopkins winning an Oscar for playing a man who was constantly confused.

“In my experience anyway, in a caregiving role up close especially with my parents, it’s usually the observers and the caregivers who are more confused than the person who has it,” he says. “One thing you learn, if you’re trying to care for a person like that, is not to correct them.

“It’s too late. Don’t argue any more because that’s your ego speaking. You need them to realise that so-and-so is dead? Why? If they’re enjoying that memory, let it go.”

‘One thing you learn is not to correct them. It’s too late. Don’t argue any more… if they’re enjoying that memory, let it go.’

Given how common dementia is in his family, Mortensen has taken a test at a friend’s suggestion to find out whether he is genetically predisposed to it as well. “Surprisingly the doctor said ‘you have very little chance of getting it’, but we’ll see if that’s true or not,” he says. “I think it’s just the luck of the draw.” 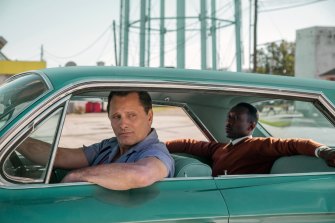 “Who’s the idiot in the story?“: Viggo Mortensen with Mahershala Ali in Green Book.Credit:Patti Perret

While Falling’s planned world premiere at Cannes and international release were disrupted by the pandemic, Mortensen believes the 81-year-old Henrickson should have been up for major awards.

“When I see some of the people who were nominated this past year – I’ll just be very frank – there’s no question in my mind that he should have been nominated for every major award for what he did in Falling,” he says. “Unquestionably.”

Many of us struggled during lockdown but Mortensen, being careful and luckily staying healthy, seemed to thrive as the virus raged in Spain. He wrote two more scripts and hopes to direct one of them next year.

“I wrote a lot of poems,” he says. “I read a lot. I finished a lot of books. I rewatched a lot of movies that I hadn’t seen in years; all kinds of movies.

“I just had a routine where I would get some exercise running up and down the stairs of the building, do a little gardening on the balcony, write for a few hours, read then we’d play board games.

“I also connected via Zoom and Skype with people I hadn’t seen for years. Family, friends. And I started writing letters … lots of letters and postcards and emails. I kind of miss that forced focus that I had.”

As the call heads towards an hour – “you can talk as long as you want; I have time,” he says – Mortensen defends Green Book from criticism that it did not deserve to win the best picture Oscar over Roma. He played a hired Italian-American driver who takes a black jazz pianist (Mahershala Ali) on a 1962 road trip through the American south.

“A very small group of people just got Green Book in their sights,” he says. “I found that to be unfair, unfortunate and inaccurate.” 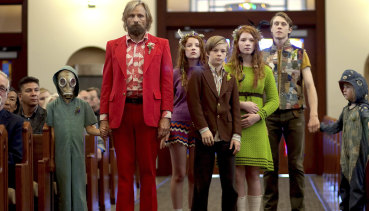 Mortensen is upset by claims it was not a true story, that the men were not really friends and especially that it was a “white saviour” movie.

“Who’s the idiot in the story?,” he says. “Who’s saving who? Who gets who out of jail? Who learns more from whom?”

True to his credo “one job at a time, each job a success, ideally”, Mortensen goes a step further than pretty much anyone in entertainment as the interview finishes.

“If you find there’s something you need to fact check or if there’s just some additional question that arises from putting this piece together, please don’t hesitate,” he says. “I’ll be happy to answer immediately, either by phone or email. Whatever’s easiest for you.”

Falling is on digital release from December 15. Thirteen Lives opens in cinemas in April next year.