"Can you even have an identity without other people? Who are you really?" So asks the introductory comic of Ariel Schrag’s latest graphic memoir, Part of It. The question plays a pivotal role in all these graphic stories about Schrag’s life.

For Schrag, the answer to that question is: No, you can’t have identity without other people. "I’ve always felt like, personally, I don’t really know that I have a ‘true self,’" she tells Bustle. "But I think I have multiple true selves that are expressed differently with different people. I express different parts of myself with my friend, Kevin, than I do with my sister, Tanya. And it does kind of feel like two selves, and my identity feels based on my company in that sense."

In Part of It, Schrag illustrates how she expresses herself differently in different communities — from her queer peers to the people at her workplace. The title itself hinges on the idea that people are longing to "part of it," and Schrag demonstrates how "it" can be a religion, a family, a social group, or even an aesthetic. 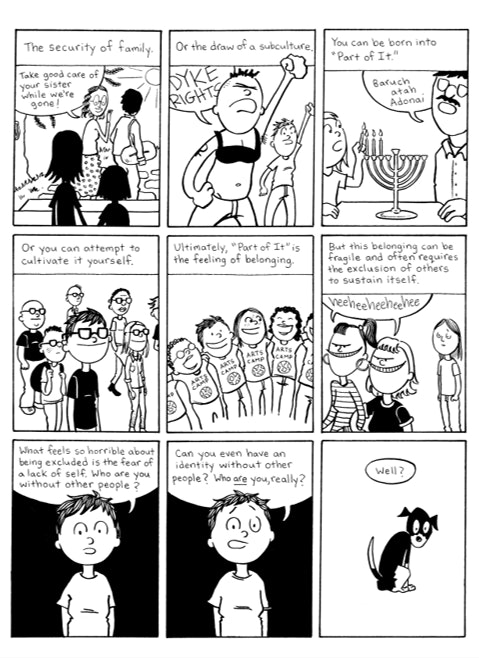 "At first I was just kind of drawing comics about whatever sort of struck my fancy," says Schrag. "I started to notice that a lot of them had this theme of wanting to be part of a group, of fitting into a group, how my identity was based on the people I surrounded myself with."

As Schrag moves in these different spaces, she illustrates the changes in how she defines herself and how she interacts with the world. In the comic "Plan on the Number 7 Bus," for instance, Schrag depicts the cut-throat world of middle school politics. She draws herself as a 13-year-old girl in the midst of planning a prank to pull on a less popular classmate. By contrast, in "Kids Korner," Schrag shows herself at the age of 24, working at a (slightly chaotic) after-school program where she forms a tight bond with the middle schoolers.

"Ultimately, one thing that you notice in the book is that the identity of my character kind of shifts — but I guess that you could also argue that I have certain traits, mainly neuroses, that are present in [my] identity," she says. "Maybe there are some parts of yourself that are innate or that don’t change, but other parts of yourself do." 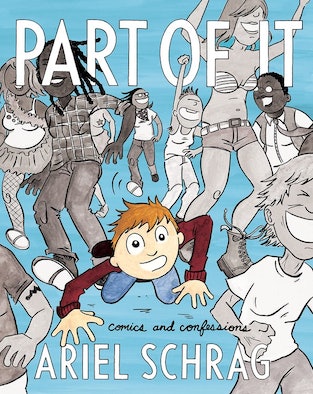 ‘Part Of It: Comics And Confessions’ by Ariel Schrag

She explores this idea in the comic "Sh*t," in which she depicts the series of events that eventually led her, at the age of 14, to anxiously hide her own poop in her backpack at a sleepover. "The private always seems to be something that needs to be hidden, or something that’s sinister, or embarrassing, or shameful," she says. "Like, the joyful parts of ourselves are generally shared, which is kind of interesting. What does it mean if, like, your true self is just somebody that hides sh*t?"

Schrag doesn’t shy from drawing and writing moments that may be seen as embarrassing or shameful. In one comic, "Fight at the Gay Prom," she confronts the remorse she feels about an incident that occurred when she was 19 years old. The comic ends with a dark panel containing a single thought bubble: "I’m sorry."

For Schrag, exploring these moments helps her better understand herself. "I feel like all writing is sort of a process of understanding yourself and the world around you, so I think it’s part of that process," she says. "Someone said that the best writing is kind of like an internal dialogue of tension between yourself, like you arguing with a part of yourself basically. And so maybe some comics, like ‘Fight at the Gay Prom,’ is like me older and wiser, arguing with the part of myself that thought it would be fun to get in a fight. So, it’s sort of like depicting both sides."

But, for Schrag, her goal is not to just expose herself for exposure’s sake. "A comic is only going to show the filtered certain parts of yourself, not everything. You might amp stuff up, or take away other stuff," she says. "Really, I just want to tell compelling stories."