The foundations of the dynamic economies of the 21st century will be massive agglomerations of people. In the new era of the learning machine, anything that is routine – from a production line to the legal processes surrounding buying and selling a house – will be performed by a robot. What will drive economic activity instead are myriad face-to-face interactions, from education to medicine, which can’t be done by machines but can be done by people living in vast, highly-connected urban areas that foster such interactivity.

This trend is already clear – think Tokyo and Tokyo Bay, San Francisco Bay, the M25 area in London, the Beijing orbital rings. In an age of capitalism with robots, the advantage of such areas is going to become even more marked. Essentially, the more an economy can agglomerate, the more it will take off, especially if it is supported by fit-for-purpose public interventions and investment.

Crucially, success will depend on people being able to move quickly, cheaply and in great numbers, one of the reasons for the great worldwide boom in rail transport and high-speed rail in particular. For one of the iron rules of human behaviour is that we will invest only so much time in travelling and commuting: more than an hour and the willingness to travel falls away.

In this worldwide race to capture the benefits of agglomeration, Britain has one extraordinary and potentially transformatory possibility, as important in the fourth industrial revolution as the possession of water and coal was in the first. If we can bring London, Birmingham, Manchester and other great cities together in an interlinked urban network with travel times of about an hour or less between them – the aim of HS2 – we will possess a world-beating agglomeration. If on top we have access to the world’s biggest market – the EU and its network of trade relationships – alongside a smart industrial strategy, Britain could be Europe’s number one economy in the century ahead.

There is however a massive obstacle: a fantasist populist right, in thrall to American ultra-libertarianism. Of course Jacob Rees-Mogg thinks HS2 a “complete waste of money”, while Nigel Farage has dismissed HS2, the building block of an autonomous economically dynamic future, as “ludicrous”. Farage’s vision is for a small-government, hyper-free-market, non-networked Britain dependent upon American corporations and US regulations to survive – a new form of vassalage, as we are pitilessly colonised by our ex-colony.

Boris Johnson’s decision to launch a third inquiry into the costs and benefits of HS2 can only be understood in terms of his need to neutralise the Brexit party in the election obviously planned for the autumn, as well as assuaging his own Brexit right and activists. The future of HS2, he can say, is under review and his commitment to Brexit cannot be doubted. If he can do this – and not give Labour the time to replace Corbyn, who he needs to remain leader – he has a chance of converting his opinion poll lead into a parliamentary majority. It’s worth a throw. 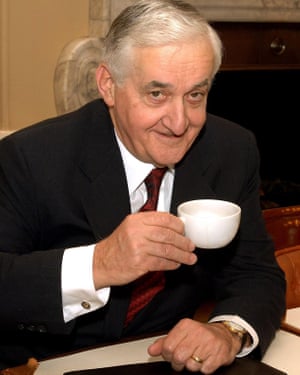 However, while he may have appointed HS2 sceptics Lord Berkeley, Tony Travers, Stephen Glaister and Andrew Sentance to the review team, the chair is Doug Oakervee, a long-standing HS2 advocate and a loyal Johnsonian creature. He and team members Network Rail chair Peter Hendy, West Midlands mayor, Andy Street, and Dudley council leader, Patrick Harley, understand the strategic arguments over connectivity and agglomeration.

Indeed, Street correctly rests his strategy for reviving the West Midlands economy on HS2’s completion. If Johnson tells Oakervee he needs it dead to beat off his know-nothing right, Oakervee will look for a way. But in part, the review gives Johnson political cover over this crucial autumn – and afterwards the rationale to drive the project forward.

The review will nonetheless mean expensive delay and it could dismantle some of HS2’s overall coherence to save small sums. But there may be compensating long-term benefits. Oakervee is a longstanding critic of the accounting processes Britain uses to assess infrastructure spending – too much accent on cost and very limited assessment of rewards. The approach is stultifying; because of the high discount rates deployed, there is zero value placed on benefits beyond 12-15 years – and there is no attempt whatsoever to capture civilisational, spatial or strategic benefits, like the rewards from agglomeration. It is a system that knows the price of everything and the long-term value of nothing.

The Romans built 11 vast aqueducts to supply their million-strong city with water, some of which are still used today, such as the Aqua Virgo that supplies the Trevi Fountain, an incredible feat of engineering, ambition and durability. However, using British accounting techniques, they would not have built one. The likes of Rees-Mogg, Farage and Travers would have congratulated them for their sagacity in not wasting public money. But then Rome knew its civilisation and prosperity rested on the capacity to deliver water.

Oakervee and his allies on the review team know the same about high-speed rail and its future importance. If they can frame an argument that shows how HS2, notwithstanding inevitable cost overruns, makes strategic sense for the whole of the UK as it is planned, they will have done a great service. It will unlock not only HS2 but a host of other projects.

However, we live in what’s looking less like a democracy than a Tory-only state. If Johnson decides the project has to go to protect his flank from the right, it will go. More important a Tory government than prosperity. Meanwhile, the rest of us can do little more than look on and hope that reason triumphs sooner rather than later.

• Will Hutton is an Observer columnist