Regardless of her applauded talents as an actor and writer, Anna McGahan is aware that many will still know her best for her breasts.

It was her breakthrough role as 1920s prostitute Nellie Cameron in Underbelly: Razor that saw her physical assets eclipse her thespian skills, the part calling for her to appear naked so often, she admits it branded her the “sex girl” for years. 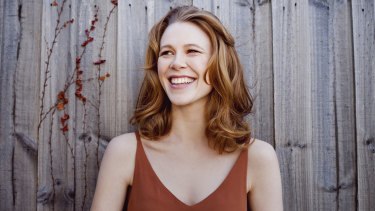 “I went on the show’s website and there were hundreds of awful comments about my body. I was too fat. I was ugly.” Credit:Beata Mazur

“After that, every role I was offered seemed to be that of a seductress, a sex slave, stripper, temptress or ingénue,” Anna, now 31, laments. “I started to question if there was more to me than my tits. This wasn’t helped when I went on the show’s website and there were hundreds of awful and gratuitous comments about my body. I was too fat. I was ugly. My breasts weren’t big enough. I wasn’t sexy at all.

“What I felt I had gifted freely for the sake of art was being received like pornography. Considering where I had been with my body before, let’s just say it wasn’t great for my self-esteem. Old wounds were reopened.”

Those wounds were deep, as Anna explains in exquisite detail in her achingly honest book, Metanoia: A Memoir of a Body, Born Again. In it, she outines her early battles with self-image that manifested in anorexia and bulimia – and, later, soulless sex – as she searched for something deeper in life.

“This book has burned in me for years,” she explains, “to the point where I understood that I couldn’t really write anything else until it was out of me. It got to the point where it burnt so hot I was almost angry. I had a fierce need to tell the truth.”

Anna explains the writing process brought up many difficult memories, especially when she re-read the diaries she had written as she grappled with her eating disorders so many years ago.

“It was haunting to see just how sick and lost and haunted I was,” she says of the words that took her back to her self-destructive, 16-year-old self being force-fed through a drip in a children’s hospital. In the diary, she writes: “My weight dropped so low that my pulse slowed to the sound of a dripping tap. I refused to eat when given the choice, so the choice was removed.”

Even when doctors warned Anna she could die, “I still couldn’t eat without feeling like I was betraying my truest purpose. I couldn’t look at my body. It just hung off my soul, refusing to die. I hated it even more for its attempt at recovery. Perhaps it isn’t the starvation that destroys us as much as the hate.”

Despite eventually overcoming her eating issues, Anna continued to struggle through her adolescence and early adulthood, with sex becoming her next battleground. Trying to find solace in soulless encounters while grappling with her bisexuality, Anna continued to self-flagellate in her search for something more. As she writes of her lack of commitment: “I had been lighting too many fires … and the fingers were all pointed at me as my ex-lovers screamed arson.”

“For such a long time, I was trapped in my own body,” Anna says today from the Melbourne home she shares with husband Jonathan Weir, a 28-year-old filmmaker and actor, and their 20-month-old daughter, Mercy.

“My eating disorder and then sex were distractions, signs of my brokenness, and I had to whittle away the walls of my jail before I could slip out of it. I am aware that I could never have written this book had I still been struggling with these issues. My faith has given me not just the strength to look back, but a need to.”

And herein lies the core of Anna’s book: the religious journey that led her to God. It moves from her first dalliance with Christianity – she wanted to get closer to a reluctant crush – to her full devotion, complete with revelations of God speaking directly to her. This leads to her giving away thousands of dollars to strangers and eventually finding peace within the confines of a heterosexual marriage.

Anna knows that the religious part of the memoir will shock many and agrees her conversion can appear “crazy”, but says the pull to write her story proved too strong not to go there. “I get what a stretch it is and how much I’m asking the reader to swallow,” she says of some of the more “mystical, strange and esoteric” aspects of her Christian conversion.

“I have a friend who said, ‘Anna, let’s just call this what it is: weird.’ And I agree, it is. But the last thing I wanted to write was something preachy that tried to covert others. So, I wrote what I experienced, and yes, it was strange but also beautiful and profound. I wanted to show that what happened to me isn’t because I am in any way special. God is accessible to everyone.”

Although Anna remains “deeply religious” today, she has not turned her back on aspects of her old life, especially the LGBTQI community, which she says she still very much feels a part of. “It is interesting that the negative reactions to my sexuality in the book seem to come from conservative elements of the Christian community who find the concept challenging,” she says.

“People who aren’t Christian have generally responded well. I am just happy to open up a conversation, which may allow others to understand there is a spectrum to sexuality and to respect that fact.”

But doesn’t the Bible say that homosexuality is a sin? “The Bible is a beautiful and important text, but Jesus never promised us a Bible to tell us everything we need to do and how to live,” Anna insists. “He just told us the very nature of God is love, and so, to have rules that are inciting us away from love – is that God’s heart?”

Anna says God still speaks to her “every day”, but while in the beginning the experience was “extreme because I hadn’t experienced it before”, today it is more a gentle “internal nudging”.

“I describe it as like being pregnant and feeling the baby kick for the first time,” she explains. “The first time it happens it’s outrageous and you can’t believe such a thing is happening. But after 30 weeks it is commonplace. That doesn’t mean I still don’t see it as a miracle or take it for granted. It is just not as extreme as it was.

“In the beginning, it was like I was holding God’s hand tightly and asking Him for guidance before I do anything, but with maturity I know He is there if I need Him. I can let go and enjoy the peace that comes with that knowledge.” Anna says her religious discovery has enhanced every aspect of her life and career, which has continued to flourish, landing her high-profile roles in House Husbands, ANZAC Girls and the TV remake of Picnic at Hanging Rock. She also writes for the stage and screen and has won awards and scholarships, including the Queensland Young Playwright’s Award twice, in 2008 and 2009.

Anna blogs at aforbiddenroom.com about creativity, femininity and faith, and she has also founded a group, The Fireplace, for Christian artists. She continues to act, although these days it is her emotional range that is receiving attention rather than her body and sexuality. “I have a no-nudity clause now,” Anna says with a laugh. “I appreciate my body as the gift it is and that means treating it with respect.”

This article appears in Sunday Life magazine within the Sun-Herald and the Sunday Age on sale October 27.