Anyone who knows me well is aware that I can be a tad — well, high-strung. I always attributed this to my undeniable Type A personality; a byproduct of my perfectionism and rigidly organized nature. It wasn’t until about a year ago, when I was describing the heart-pounding panic I experience when I’m running just five minutes late, that my therapist used the term “anxiety.” TBH, it blew my mind, because it never occurred to me that there was a diagnosis for what I felt on a daily basis. While I’ve never taken prescription medication for my anxiety, I’m always seeking out ways to put a damper on it — such as through meditation and deep breathing exercises. But when I read that Jennifer Aniston, aka my lifestyle guru, uses CBD to help her cope with anxiety and stress, I was intrigued. And while I went into the process as a skeptic, I’ll admit I was surprised by the results.

CBD oil, also known as cannabidiol — a compound derived from the marijuana or hemp plant — has become an increasingly popular option for people who want to treat everything from stress to inflammation to menstrual cramps to other kinds of chronic pain naturally, sans prescription or over-the-counter pills. And there is a growing body of research to support the hype, too. One 2011 study published in Neuropsychopharmacology found that taking CBD seemed to reduce anxiety, cognitive impairment, and discomfort for people with social anxiety disorder before they had to perform a simulated public speaking test. In another 2019 study from The Permanente Journal, 79% of participants reported decreased anxiety scores and 67% reported improved sleep within the first month of taking CBD. And in a 2015 Neurotherapeutics analysis, researchers concluded that CBD oil showed “considerable potential” for treating social anxiety disorder, panic disorder, obsessive-compulsive disorder, generalized anxiety disorder, and post-traumatic stress disorder.

By the way — CBD doesn’t contain THC, which is why it won’t get you high the way marijuana will. That’s also why it’s legal in the United States.

When I strutted over to The Hempest in Boston to pick up my bottle of CBD oil, I was feeling cautiously optimistic. After all, the supportive research seemed promising, but I was also wary of a placebo effect, which can be super powerful. Would I subconsciously convince myself that it’s effective simply because I wanted it to work? The store employee recommended an oil by Charlotte’s Web, and when he asked what dosage I’d like to take (there were a few options), I immediately panicked. Fam, I felt so stressed about choosing the right number of milligrams that I spent an embarrassing amount of time frantically searching the web for guidance. Clearly, I’m a spectacular candidate for this little experiment.

After settling on a size — a 30 mL bottle that contained about 25 mg of hemp extract per 1 mL serving — I went home and eagerly tore the box open to administer my first dose. As directed on the bottle, I took two full droppers of the CBD oil every morning and/or night. So, did it have an impact on my anxiety? Here’s what I noticed. 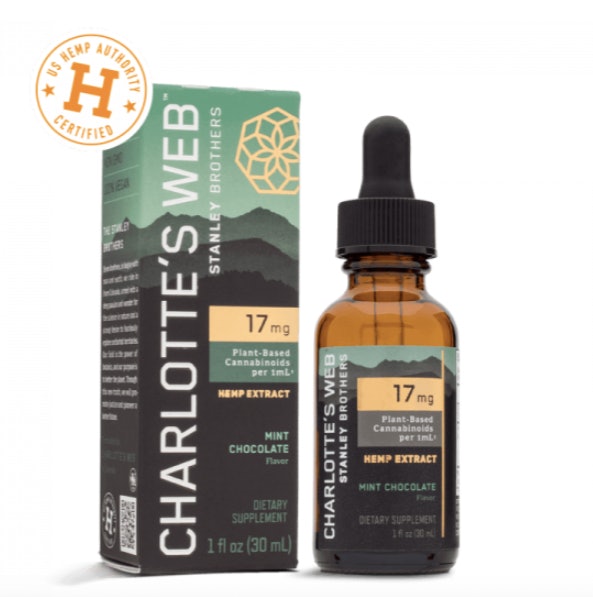 I was slightly less edgy

One of the most frustrating aspects of my anxiety is that it’s so quick to flare up. In a matter of seconds, my heart rate is surging, my thoughts are racing, and my stomach is in knots. What I noticed after a few days of diligently using the CBD oil was that while my anxiety did not vanish completely, it was as if the edges on it were softened. It seemed to take a little more than usual to trigger me into an anxious state, and once I was in it, the volume on the anxiety was overall lower than it typically is. It was a subtle difference, and if I had been expecting to suddenly live an anxiety-free life, I would have been sorely disappointed. Still, the effects were noticeable in specific scenarios.

My nerves were less noticeable

On the fourth day of my experiment, my agent sent me on a commercial audition. Normally, auditions automatically make me nervous, but I was surprised to find that I was pretty much cool as a cucumber. Sure, the butterflies were still there, but they weren’t the typical nauseating, sweat-inducing variety. Because I felt unusually calm, I was able to read the script more confidently.

I bounced back from anxious episodes a bit faster

I’m going to be real with you all: I still experienced occasional anxiety during my week of using CBD oil. On the fifth day of my experiment, I got in an argument with my boyfriend, and even though it revolved around something totally insignificant (I struggle to remember the subject now, that’s how meaningless it was), it still stoked my anxiety to flare up. While the argument did continue to escalate, I was relieved to find that I took a shockingly less time to recover from it once we’d resolved the issue. In fact, within mere minutes of wiping away my anxiety-fueled tears, I was smiling. This effect was beneficial for both of us, too. Since I was able to bounce back so much faster, we could resume having a phenomenal afternoon hiking the trails of a state park and soaking up the sun by the Gloucester shore.

That night, I slept like an overworked infant with an abundant supply of melatonin. As in, I pretty much I woke up in the same position I fell asleep in. To be fair, I’ve never been someone who has trouble sleeping, and it was an especially long work day, but I did wonder if the CBD oil played a part in my comatose-level slumber.

While CBD has yet to be approved by the Food and Drug Administration to treat anxiety, more and more people are using it for this purpose. According to a 2018 survey published in Cannabis and Cannabinoid Research, the top conditions that people use CBD to treat are pain, anxiety, and depression. But how does it work? In the words of James Franco’s stoner character in Pineapple Express: “It’s actually very scientific.” Cannabidiol is chock full of chemicals (called cannabinoids) that bind to specialized receptors in the brain. Some of these receptors are involved in such neurological processes as appetite, sleep, pain perception, addiction, and wait for it — anxiety. In fact, a 2014 study at the University of San Paulo in Brazil and King’s College in London discovered that CBD directly activates a particular serotonin receptor, thus triggering an anti-anxiety effect.

While finding the right CBD routine that works for you is certainly a process of trial and error, I found that taking it in the morning, when I tend to be more on edge, was more beneficial than taking it at night, when I’m inherently more relaxed.

Since CBD can have side effects and may interfere with other prescriptions, it’s a good idea to talk to your health care provider before you test it out. Given my experience, I’m definitely interested in trying a higher dose morning and night to see if it quells my anxiety even further.

The bottom line? I can’t say that CBD is a miracle cure — I still experienced bouts of anxiety throughout the week that I used it. But still, I did notice a difference in the severity of the anxiety. Ultimately, it’s not what I felt — but what I didn’t feel — that took me by surprise.