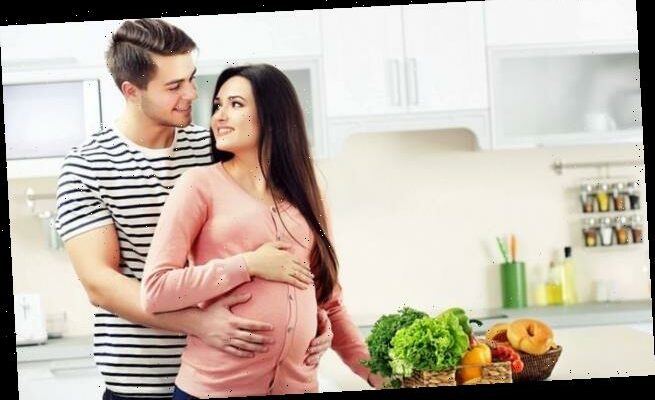 A husband has been slammed after his heavily pregnant wife revealed he ‘polices’ what she eats.

The anonymous woman, from the UK, has taken to Mumsnet to explain how she is usually 10 stone and a size 10, and eats three meals a day and an occasional snack, before adding her husband ‘doesn’t eat enough.’

She went on to reveal that despite carrying their unborn child and already ‘feeling like a whale’, he has an ‘annoying habit’ of ‘policing’ what she eats and doing it in a ‘hinting’ kind of way.

And many were quick to take to the comments section to slam her husband’s ‘rude’ comments.

‘Yes it’s rude and controlling. Tell him to stop before he passes on his food issues to your DC,’ wrote one, while a second penned: ‘I would be piling my plate high high high. Tell him to f*** off and leave you alone.’ 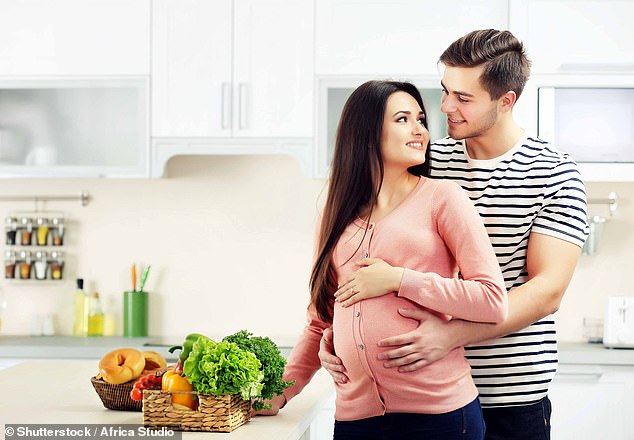 An anonymous woman, from the UK, has taken to Mumsnet to explain how her husband ‘polices’ what she eats (stock image)

In the initial post, the woman penned: ‘Briefly, I have always eaten more than DH. He doesn’t eat enough. He will regularly go without a meal in the day, only having tea and even then won’t eat a huge amount at tea time.

‘I on the other hand eat my three meals and occasionally snack a little too. However I have never been overweight due to keeping fit and eating fairly healthily. Before this pregnancy I was 10st and a size 10, which for my height was quite slim.’

She then went on to give more specific examples of how her husband subtly tries to police what she eats.

‘He’ll finish what he’s eating (leaving loads) and say “are you finished?” and stand there for my plate whilst I’m quite clearly not,’ she explained. ‘He’ll say things like “you know you don’t need to empty your plate”, “you can’t be hungry”, and so on…’ 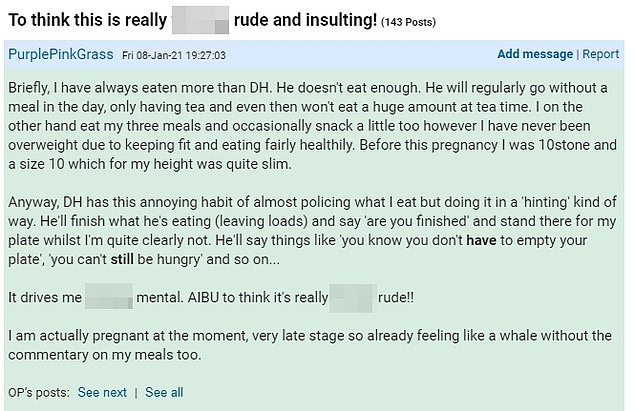 The woman explained that despite carrying their unborn child, her husband has an ‘annoying habit’ of ‘policing’ what she eats and doing it in a ‘hinting’ kind of way (pictured)

The woman went on to say it drives her ‘mental’ – adding that she’s at a ‘very late stage’ of her pregnancy so is ‘already feeling like a whale’ without the commentary on her meals too.

And many were left infuriated, arguing that no matter what size anyone is, they should be entitled to eat whatever they want.

‘Even if you were a size 20 and 20 stone, you are still entitled to eat as often as you like and as much as you like,’ wrote one, while a second penned: ‘In general it’s rude. When you’re pregnant it’s very, very rude.’

A third agreed: ‘Rude AF, but especially as you’re pregnant.’

Many suggested various amusing ways in which the pregnant woman could respond – including calling him out every time, and eating his meal, too.

‘Sympathies, I had a flatmate that did this, that was bad enough but living with it constantly must be hard.’

A second commented: ‘God that would do my head in. Say, actually I am still hungry. Take his plate at eat his too,’ while a third suggested: ‘That would infuriate me. Tell him to eat up and stop wasting so much food.’

Meanwhile, another wrote: ‘I think it is a little rude, it’s not for anyone to police another’s intake..however I did mention my husbands eating when I felt he was loosing too much weight, but we had a conversation about it, not this sort of behaviour.’