How to share the cooking… without boiling over: From top chef Michel Roux and his equally talented daughter, tips for keeping your cool (and serving up a feast) when there are too many cooks in the kitchen

Who’s doing the cooking in your house this Christmas? Normally it’s a case of drawing the short straw, or sticking with tradition and letting Mum, Dad or Granny do it.

But not in the Roux family. With three generations of top chefs under one roof, things can get a little, well, competitive.

There’s grandfather Albert, 83 — who, together with his brother, Michel Sr, 77, founded renowned restaurant Le Gavroche — Albert’s son, Michel Jr, 58, who boasts a TV cookery career and two Michelin stars; and his daughter, Emily, 27, who has opened her own restaurant, Caractere, in West London.

That’s a lot of chefs clashing over how to do the turkey. So what are their tips on keeping the peace?

Here, in an exclusive joint interview, Michel and Emily lift the curtain on the Roux family festivities, from rival puddings and squabbles over the washing up, to who gets stuck peeling potatoes — plus, the year the dog ate the turkey. 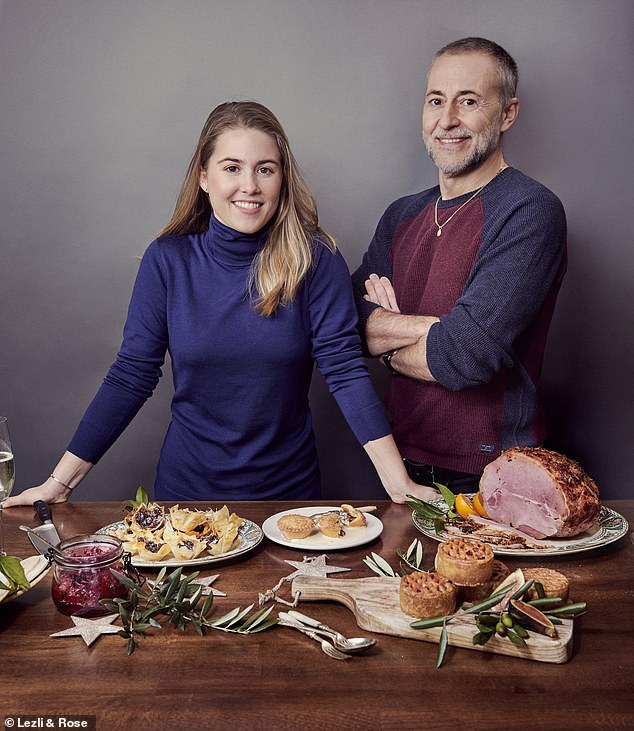 Christmas is a time to be together, and there can be up to 18 of us at our family house in the south of France.

My wife, Giselle, and I load up the car with British goodies — turkey, sweets, Stilton — and set off from our London home on December 22.

When there’s more than one chef in the house, you need to be organised. We sit down a month in advance and work out the menus and what we need. Each person takes care of one course and there’s a head chef — usually me.

In France, we celebrate on Christmas Eve, that’s when the feast takes place. We have a big lunch on Christmas Day and my wife’s birthday is on Boxing Day — so we don’t have to settle on one menu; we can have three! I love a nice roast bird — turkey, goose, or even capon [a fattened cockerel], which we’re having this year.

A few years ago, we had a huge ham glazed with honey and mustard, and one Christmas I made a game pie.

The biggest turkey we’ve ever had was 4 kg. I don’t think you need a massive one. They take ages to cook and can be dry. All you want is a slice or two.

I haven’t burnt the roast or had any major mishaps — yet. Saying that, when Emily was two or three, our Labrador nicked the cooked turkey off the table, just as we were about to sit down, and ran into the garden with it.

I’ll never forget looking out the window and seeing the dog lying on the grass with half a carcass left, looking very pleased with herself! We had no choice but to laugh and pile our plates high with potatoes and trimmings. 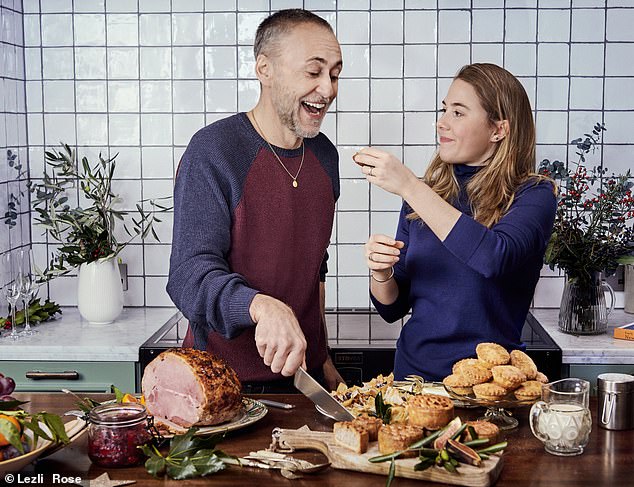 Michel (pictured left) revealed he enjoys a traditional British Christmas dinner and opts for salmon, Stilton and a good roast

I’m a big fan of roast potatoes cooked with goose or duck fat for flavour. I even love Brussels sprouts, shredded and stir-fried so they’re crunchy.

One year I remember Dad, who’s always cold, sat nearly all day in front of the wood fire with a bag of potatoes and a bag of sprouts. We handed him a peeler and a glass of champagne and told him to get on with it!

As Emily’s grown up and become more confident as a chef, she’s taken on more responsibility. She and her husband Diego [Ferrari] usually do puddings and starters.

She’s not a fan of turkey, which can cause problems. Once, when she was two, she tucked into a bowl of braised beef and ended up with it all over her little face. Another year, she refused to touch the turkey and just ate stuffing.

Emily doesn’t like Christmas pudding, either. Sometimes I don’t know how my only child has ended up so fussy! I make Christmas pud using a Mrs Beeton recipe, but with brioche instead of breadcrumbs, and doused in Guinness and brandy. It’s so good it’s even won over the French side of the family.

I’m a British traditionalist when it comes to Christmas food. The French would eat oysters and game, but I prefer smoked salmon, Stilton and a good roast.

Unsurprisingly, some of the best presents I’ve ever had have been food-related. Two years ago, Emily gave me some incredible air-dried beef, and another year I got a cheeseboard. I’m a cheese fiend — and we eat it before dessert, not after. I don’t think my French relatives would forgive me if I did it the other way round.

Giselle tends to stay out of the kitchen, focusing instead on laying the table, gathering holly and pine cones to make it look beautiful. 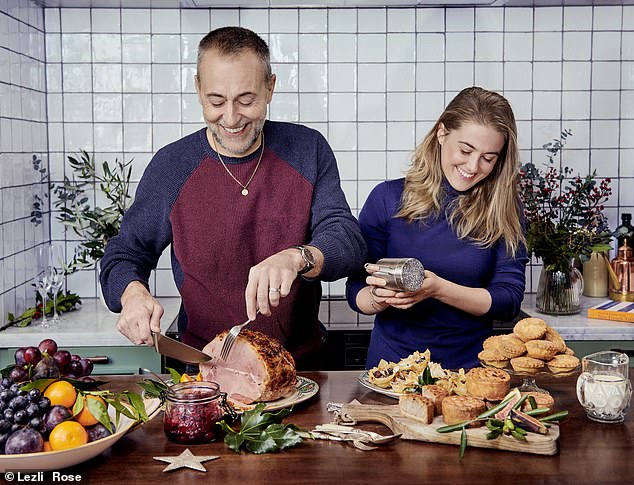 Michel (pictured left) claims if you’re wound up when making Christmas dinner, it will affect the taste

One year we had a mini-disaster when decorations on the table caught fire from the tea lights. But everyone was so stuffed full of food and drink they barely noticed.

After the meal, I offer to wash up, but my wife tells me off for loading the dishwasher wrongly, so that usually gets me off the hook.

Then, at long last, I sit with my feet up. Sometimes we play cards or just chat and enjoy being together. It’s so rare — we have our own families and responsibilities, so we only manage to get everyone under one roof every three years.

When we do, it’s about having fun, not getting stressed. If you’re wound up when you’re making Christmas dinner, it won’t taste as good. And, if you have a dog, don’t let it anywhere near that turkey!

My earliest memories of Christmas are of the three of us, Mum, Dad and me, in our little flat in South London where I grew up. And the presents! One year, I got a red bike, which came in this gigantic box, and I remember grinning from ear to ear.

I didn’t start helping in the kitchen until Dad bought the house in France ten years ago. I was at catering college then.

My favourite thing about Christmas at home is the rigorous organisation. We each take turns in the kitchen, so everyone gets to enjoy equal amounts of chatting and appreciating the food. 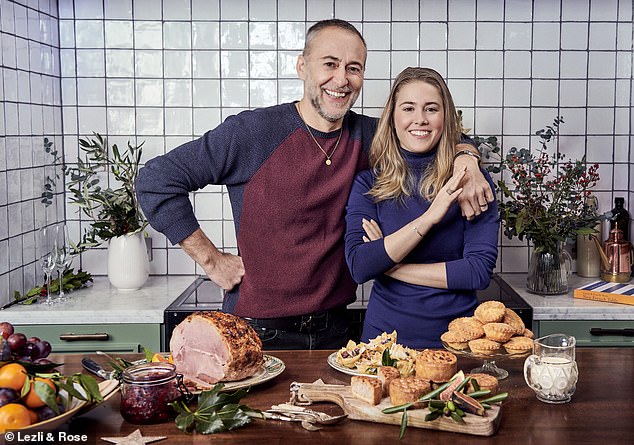 As professional chefs — my husband, Diego, runs the kitchen at Caractere and was previously head chef at Le Gavroche — it’s the only way we know how to work, and it means Dad can’t boss me around, as he has his own course to do.

I’m not a fan of turkey, and prefer pork, beef, or fish at Christmas. One year, we did fish en papillote [cooked in parchment paper] as a middle course and it was lovely.

I also hate sprouts and anything with candied fruit, such as mince pies or Christmas pudding. I adore panettone, but pick out the fruit.

I sound like the Roux family Grinch! I love every other part of Christmas, but if I were in charge of the main meal it would be more like a normal roast: a joint of meat, crispy potatoes and root vegetables like carrots, parsnips and salsify.

I like to make a rival option to Christmas pudding, and it’s always more popular. In the past I’ve made Yule logs, profiteroles and souffles with prunes and Armagnac.

As a family, we love trying new things. Diego is Italian, so we’ve cooked festive dishes such as zampone (stuffed pig’s trotter) and cotechino (slow-cooked sausage).

One Boxing Day, Dad and I went truffle-hunting in the forest with a man from the local village in France and a dog trained to sniff out the fungus. I used what we found in a risotto that evening.

As that was Mum’s birthday, we cooked up all her favourite foods: fish and seafood mains and millefeuille pastry for dessert. It’s the one day Dad does washing up!

We don’t tuck in to leftovers until December 27 — but we wouldn’t settle for a turkey sandwich. Leftovers have to be proper meals, like turkey curry or shepherd’s pie made from goose.

I’m not joining Mum and Dad for Christmas this year. Diego and I will be at our flat in London as we’re so exhausted from opening our new restaurant.

Happily, we’re all going to be together for New Year — so no doubt there will be plenty of food and a good old Roux kitchen rota.

I’ve never braved cooking for the whole family, but I would like to try it. Dad loves it, so it might be hard to get him to step down!

One day, we might pop him by the fire and put him in charge of peeling . . . but I reckon it’s a long way off.

ooh -la -la ! How do you give trimmings a twist this Christmas?

Make your festive feast really special this year, with Michel and Emily’s top tips for a Noel with added je ne sais quoi . . .

SPICE UP YOUR SPROUTS

Michel suggests shredding Brussels sprouts, stir-frying them in a pan with a little butter or oil, then adding bacon bits, dried cranberries and chestnuts or wild mushrooms. Controversially, his top tip is to sprinkle over chilli flakes or chopped, fresh chillies. ‘This will liven them up and pack them full of flavour,’ he says.

Use good-quality pork meat for your stuffing and add chopped chicken livers for flavour and texture, plus a little dried fruit, Michel suggests.

Bake in the oven separately from the turkey, in foil or in a terrine. ‘This way it’s easier to cut and you can make sure it’s cooked properly,’ says Michel. 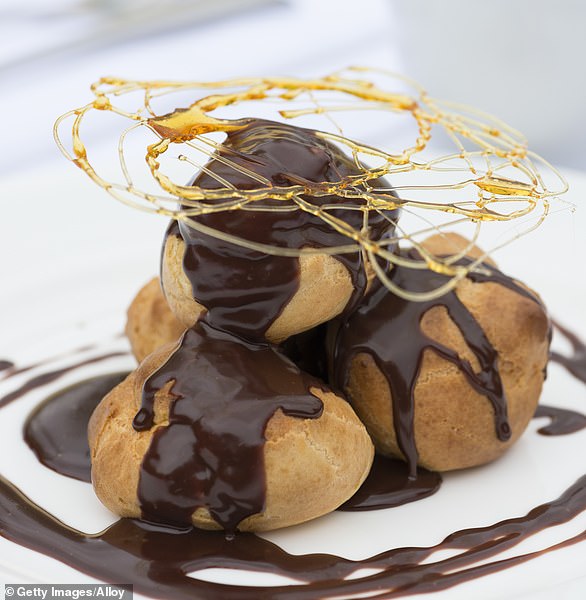 The French avoid fuss at Christmas — so cook as much as possible in advance. Emily says sauces, such as gravy or creme anglaise (custard), are ideal to prepare beforehand. ‘You’ll be grateful on the day,’ she says.

Emily and Michel believe roasties are the best part of the meal. ‘Use floury varieties, such as Maris Piper or King Edward, par-boil, then shake in a colander to bruise them,’ says Michel. ‘Heat goose fat in a tray in the oven at about 200c, tip in the potatoes and roast for 45 minutes, shaking every 15 minutes or so until golden. Finish with sea salt, cracked black pepper and sprigs of rosemary or thyme.’

A rich and chocolatey dessert is preferred by the French. They don’t do Christmas pudding.

‘It’s the crowning glory — so has to be impressive,’ says Emily. ‘For me, Christmas pudding is too heavy after a big meal.’

You could follow her lead and make Yule log or profiteroles, or try Michel’s favourite alternative: a light chocolate mousse, served with pears poached in red wine and spices.

Both Michel’s book, The French Revolution: 140 Classic Recipes Made Fresh & Simple (£25, Orion), and Emily’s, New French Table: A Fresh Take On Classic Recipes (£25, Mitchell Beazley, co-written with her mother, Giselle), are out now.