February is a problem for lavender. Our most humid month often means sudden death for lavenders bred where summers are hot and dry.

So 15 years ago plant breeders Bob Cherry and John Robb started a project to grow a Sydney-friendly lavender. This autumn sees two new releases: a light and dark purple join two pinky-toned plants in the Lavish lavender range. These lavenders thrive in climates both dry and humid and flower with unusual, opulently double, fluffy flower spikes. 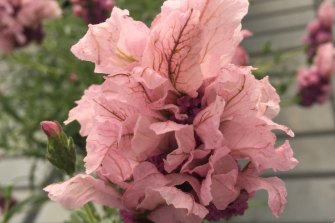 The lavender project started with about 10,000 seedlings in a hectare of space at the Paradise Plants site at Kulnura on the Central Coast.

"We used every available variety and lots of straight species, hybridised and open-pollinated, to produce as much variety as possible in the seedlings," Robb says. "Once they were growing Bob and I would get out our chipping hoes and take out anything that looked a bit scabby."

Ruthless editing is the key to success as a plant breeder, Robb says. "If it's second-best you have to chuck it."

The rejections whittled the field down to a few hundred plants that survived well in the humid, hot conditions at Kulnura. The next step was to find the weird things, the odd habit, that could launch something different.

The beginnings of Lavish lavender was a single plant with a branched inflorescence. Most Spanish lavenders have just a couple of wings at the top of the flower spike. But one striking eccentric had wings all down the spike, giving it a completely different look to other lavenders.

"It was quite unstable and took 15 years of breeding and back-crossing and selection to get that to a stable form that we could take to the market." explains Robb.

The first plants released last year were both pink, rather than lavender.

"Pink is an anomaly that happens rarely in lavenders in nature. I've seen it in the wild in Spain, twice," Robb says. "We were lucky enough to get seed from an early pink called 'Kew Red', which was very fragile, and spent a lot of years developing that."

The pink forms are called "Lavish Musk" and "Lavish Rose" and will be joined by lavender-toned "Lavish Blue" and darker "Lavish Purple" from autumn. All four will grow to about 1.5m x 1m wide, can be planted at 50cm centres for a hedge and should be mulched, with mulch at least 5cm from the base of the plant to allow air movement.

Robb is still editing his lavender patch and made his selection from last year's Top 50, narrowing it down to 14. "Some are additions to our existing ranges and others are completely new concepts – there's one with very silver foliage, another with a ground-cover habit, a very-tall growing one. We're always looking to the future, thinking what can be next for the Australian gardener in lavenders?"