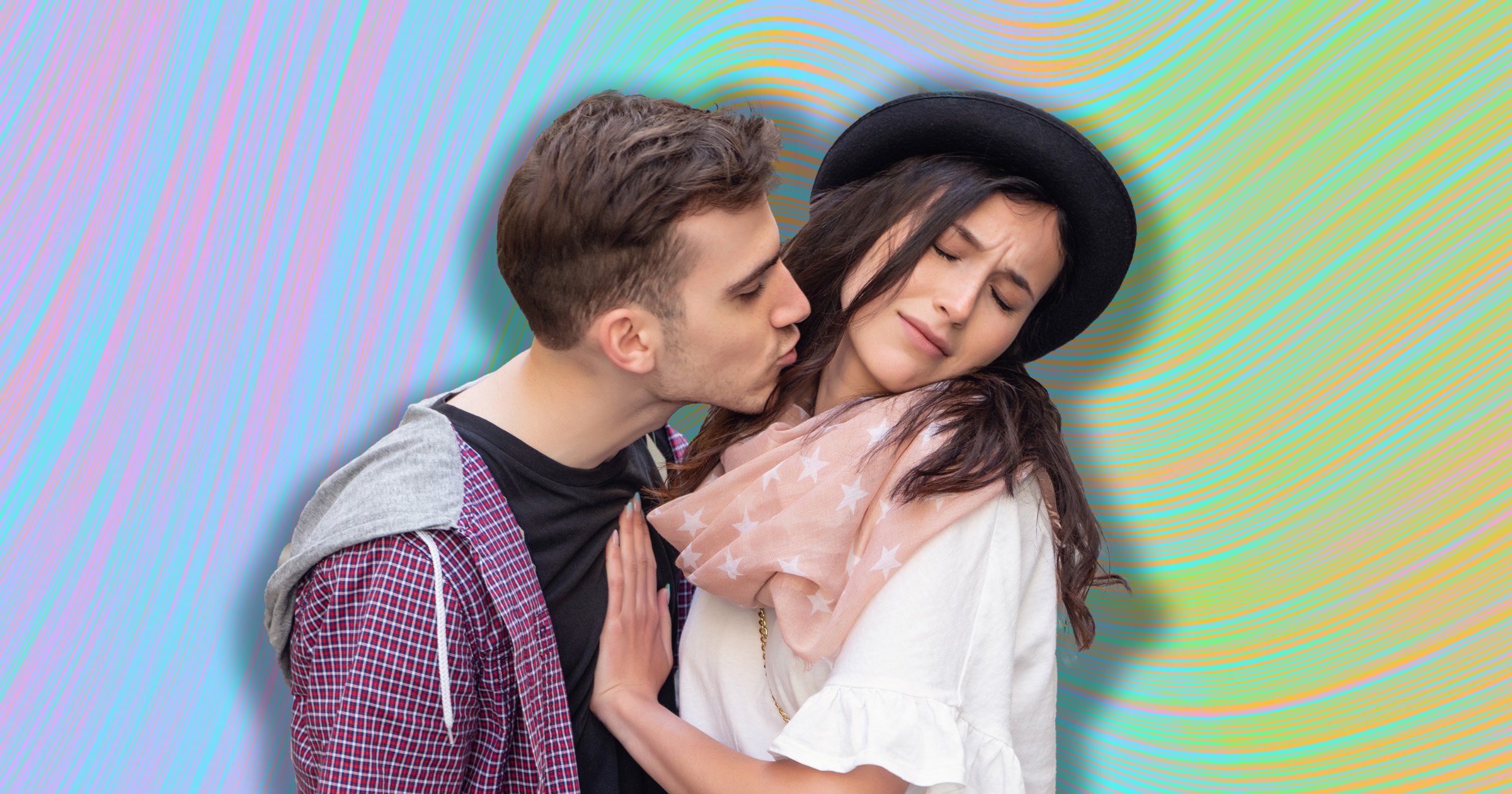 You lean in to give your partner a cute little smooch, and they dodge it with ease.

You go to hold their hand, and they move it out of the way.

You try to cuddle up for a photo and they subtly arrange their body apart from yours.

This is the public rejection of affection (PRA) – the deeply painful and humiliating consequence of an attempt at PDA gone wrong.

If this has happened to you, don’t feel too horrendous. Even Machine Gun Kelly and Megan Fox – who are so hot for each other they joke about drinking each other’s blood – have fallen foul to a PRA.

In Machine Gun Kelly’s case, his reaction to Megan’s swerve was an awkward laugh and a sip of wine.

Us normals might not have the horror of having our public rejections of affection captured on camera, or taking place on the red carpet, but that doesn’t make them any less cringeworthy or hurtful.

There’s something oh so shameful about people witnessing a rejection from your other half – and not just because it seems to hint at some domestic drama behind the scenes.

So when we find ourselves on the receiving end of a PRA, what should we do?

Why does a public rejection of affection feel so brutal?

Getting turned down always stings, even when it’s a comparatively minor snub of a kiss or snuggle.

Sex and relationships expert Annabelle Knight explains that this is because even the smallest dodging of affection taps into that bigger, deeper fear of being rejected.

‘Even though the act itself is physical, we internalise this as emotional,’ she tells Metro.co.uk.

Some people will feel this more deeply than others.

‘This could be because physical touch is your love language,’ Annabelle notes. ‘There are five languages of love and making sure we speak to our partner in theirs is an important building block of a happy and healthy relationship.

‘It also may be that past partners behaved in a similar way and you still carry emotional baggage from that, or that you see affection rejection as something far deeper, something that carries more weight and says a lot about how your partner really feels about you.’

There’s also the public element – it’s pretty embarrassing to have any form of rejection happen in sight of other people, and this can make you worry about how your relationship is perceived.

Annabelle adds: ‘The weight we place on seemingly small acts plays a part too. Hand holding can seem like a small thing to one person, but can mean the world to another.

‘A united front as a couple tells the world that your partnership is a good one, if you appear mismatched then that can lead to some emotional scarring, and can damage your chances of happiness within the relationship.’

How should you react to a public rejection of affection?

‘You have two choices at this moment in time; laugh it off, or, make your feelings known,’ Annabelle tells us. ‘It is worth noting though that bringing up the fact that you aren’t happy in the moment can lead to an argumentative discourse, that in turn can lead to further heartache.

‘I’m in no way advocating avoiding difficult conversations, it’s just that in my experience a little distance between the incident and the conversation can often be a good thing. It allows you to gain perspective, figure out how you really feel, and get your thoughts in order to express yourself during the conversation.’

We’d back that school of thought, if only because following up a rejection with a public argument will only heap on the embarrassment.

Much better, we reckon, to keep your cool, brush it off, but make sure to discuss what happened afterwards.

‘Absolutely speak to your partner about any behaviours that have a negative effect on you,’ Annabelle recommends.

‘Have a think on your own first so that you can best communicate your needs when the time comes.

‘It’s a good idea to have it clear in your head not only how their actions make you feel, but why you feel this way as well.

‘If you can communicate this then your partner stands a better chance of understanding the situation fully and can address the issues with all the facts.’

Ask your partner why their rejection happened, and try to listen without judgment. Were they trying to tell you they were annoyed with you? Are they not fans of PDA? Were they overwhelmed in the moment?

It’s worth understanding the ‘why’, along with talking through how the rejection made you feel, so you can avoid similar incidents in the future.

What if someone’s a serial PRA-er?

A one-off rejection will happen now and again. But what if your partner constantly drops your hand, turns away from kisses, and bolts at even a brush of their arm?

This doesn’t automatically mean that your other half doesn’t really love you, and it’s not always a red flag – some people just aren’t into physical affection, and others might love a cuddle, but only in private.

If you’re happy with that, it’s fine. Where problems arise, though, is a mismatch in a desire for PDA.

If compromise and consideration of your feelings isn’t happening, this relationship might not work out long term.

‘Most of us do like a little bit of physical touch now and again and if you’re partner is constantly rejecting you, that will lead to contempt and feelings of worthlessness,’ says Annabelle.

‘Making sure you’re on the same page as someone when it comes to what type of behaviours you value in a relationship is really important, as is letting your partner know when their actions fall short of what you need to be happy.

‘Even if you both speak entirely different love languages, learning to compromise for the health and happiness of your relationship is a truly bonding experience that will help forma stronger, more meaningful emotional connection.’