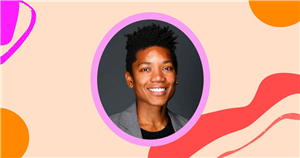 After playing basketball for four years in college, Nevin Caple didn’t feel like there was room for “people like her” — a Black, out lesbian — in the world of collegiate athletics. “I didn’t want to make myself small to fit in,” she said. “Coaches who came out as lesbian, gay, or queer in the early 2000s had a hard time recruiting because families wouldn’t send their kids to play for them. And when you can’t recruit top talent, you can’t win. So the only way to survive the profession was to perform the straight, cis experience perfectly.”

It was because of this experience that Caple has made it her mission to bring diversity and inclusion to the source — decision makers in college sports, athletic administrators, and coaches. Her company, LGBT SportSafe, teaches them how to lay an inclusive foundation that revolves around the experiences of student athletes. “I want sport leaders to be a transformative force, and part of my job is to create the psychological safety for that coach or administrator to own the places within themselves where they still have to grow,” she said. “My work is all about bringing athletes who are furthest from the center closer to it.” The mission of LGBT SportSafe — to create an infrastructure for coaches, administrators, and student athletes to support LGBTQ+ inclusion in college athletics through programming, policies, and public-awareness initiatives — isn’t an easy undertaking. Much of what Caple does centers on the often-uncomfortable work of shifting behaviors that people may feel are at the core of who they are. “I have to convince those whose experiences are [at the center] the most not to take up so much space, and to give up some of their power so the people around them can feel a little more empowered,” she said. “If we can buy into that, we start to see a shift in where it’s no longer us against them but we.”

Caple underscored that it’s essential for the people who hold the most power to take the greatest risk — those who lead, influence, and shape the lives of young people need to be on the forefront of embracing a diverse and inclusive environment. “Not only should we be hiring and recruiting staff and athletes from underrepresented backgrounds but learning their language, naming their experiences as real and important, and then taking action to protect them. The most affirming thing we can do is to name someone’s existence as real and important, even if we don’t fully understand or agree. When coaches name the experiences of their student athletes, they are showing they understand there is a culture that exists beyond them.” So how can diversity and inclusion become the standard rather than the outlier when it comes to sports? “If institutions don’t provide mandatory training to staff, we can’t expect them to show up knowing how to address systemic racism or the harm student athletes experience as a result of being stigmatized,” Caple said. “There also needs to be a willingness to ask the hard questions of yourself first. To really begin the healing process, those of us who are straight or cisgender or white must be willing to interrogate what it means to be straight, cis, or white in a world that rewards those experiences.”

Though the work of self-reflection is often messy and complicated, Caple said the sports world is the perfect arena in which to be shining a light on these issues. “Sports build relational trust where we learn to speak each other’s language and have each other’s backs,” she said. “No matter where you come from, your race, gender, orientation, socioeconomic status, we share the same spaces. We have the opportunity to learn and lean into different cultures just by being proximate — when we’re proximate with each other, it becomes hard not to see yourself in someone else.” Caple’s work is meant to be cyclical — when a coach or administrator creates a safe space for a student athlete, that student is more likely to feel empowered to let their true self be more visible, which in turn helps destigmatize the LGBTQ+ experience. “After working with LGBT SportSafe, student athletes have expressed a greater sense of pride in their institution and safety coming out as LGBTQ+ without feeling the shame or guilt of the past,” Caple said. “They are also able to identify which coaches and administrators in the department are deeply committed to the work and taking action to support LGBTQ+ inclusion. Athletic administrators are hosting more events, being more visible and vocal on social media, and actively listening to the student-athlete voice.”

The experience of working with educators and student athletes has had just as profound an effect on Caple herself. “One of my most defining moments came . . . when a student athlete approached me and said, ‘Thank you, your story brought me closer to God,'” she said. “That struck me because growing up in the church, I spent much of my life feeling as though I didn’t belong in my own body. It was one of the first moments I felt at peace with my purpose and loving the way God made me. My humanity is not an apology, and knowing this liberates me completely.”