The country’s COVID-19 vaccination rollout will begin next Monday after the first 142,000 doses of the Pfizer/BioNTech vaccine landed in Australia.

Health Minister Greg Hunt said the vaccines landed just after midday on Monday and would go through security and quality-assurance processes, including batch testing, before the rollout began on February 22. 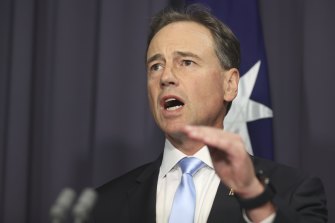 Greg Hunt revealed the first shipment of the Pfizer/BioNTech COVID-19 vaccine had arrived in Australia.Credit:Alex Ellinghausen

The federal government will keep 62,000 doses of the initial shipment aside for second vaccinations. Thirty thousand will be used for aged care workers and residents, and the remaining 50,000 will be divided between the states and territories on a population basis.

The minister said the states had been told how many doses to expect, but did not release that breakdown publicly.

It comes as bottling began for the first batch of the Oxford University/AstraZeneca vaccines being produced at CSL’s facility in Melbourne. The AstraZeneca vaccine has not yet been approved by the Therapeutic Goods Administration.

Prime Minister Scott Morrison said the government had spent $6.5 billion on the vaccine rollout program, including $1.9 million for the initial rollout of the Pfizer/BioNTech vaccine.

“People who need to get the protection first will get that first,” he said during question time. “But also I note that this is just the start of this process.”