That’ll teach them! Hilarious photos reveal animals whose greed got the better of them – from a thieving seagull to a cat which got trapped INSIDE its food dispenser

Dogs, squirrels and pesky seagulls are renowned for stealing a cheeky treat when they get the chance.

But these greedy pets and wild animals from around the world have a love of food that sometimes sees them come a cropper.

Compiled in a hilarious series by Bored Panda, these daft creatures have ended up in a range of sticky situations.

There’s a cat which somehow got trapped inside its food dispenser and a guilty-looking hound with its head stuck inside an empty container of cat food.

Also on display is a squirrel that managed to get itself wedged inside a bird feeder and a very podgy hamster which had trouble getting back inside its cage. 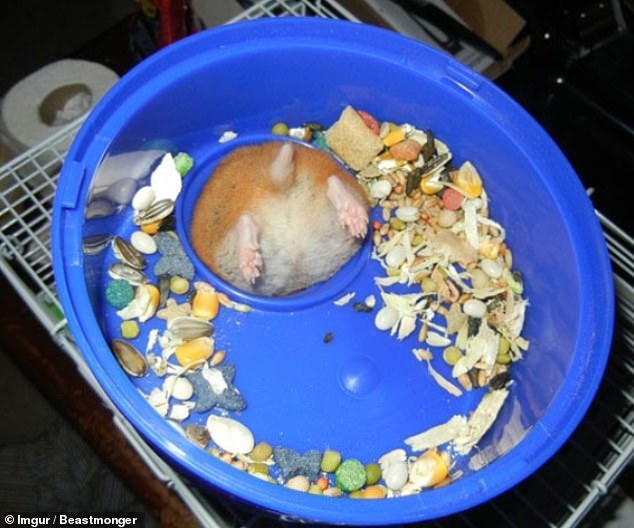 This hamster, in an unknown location, is among the animals pictured getting stuck after being a little too greedy 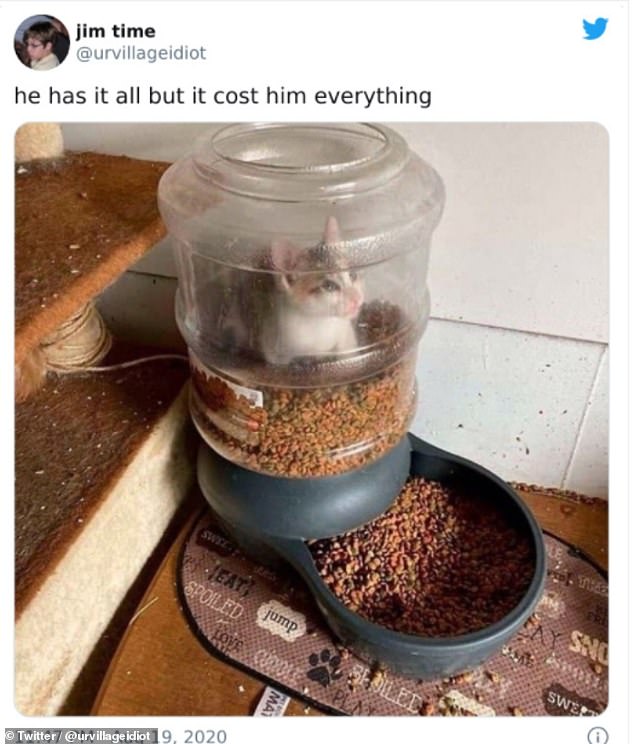 Twitter user @urvillageidiot, from Los Angeles, shared this hilarious image of their cat trapped in its own food dispenser. They wrote: ‘He has it all but it cost him everything.’ The tweet has since gone viral and been shared thousands of times 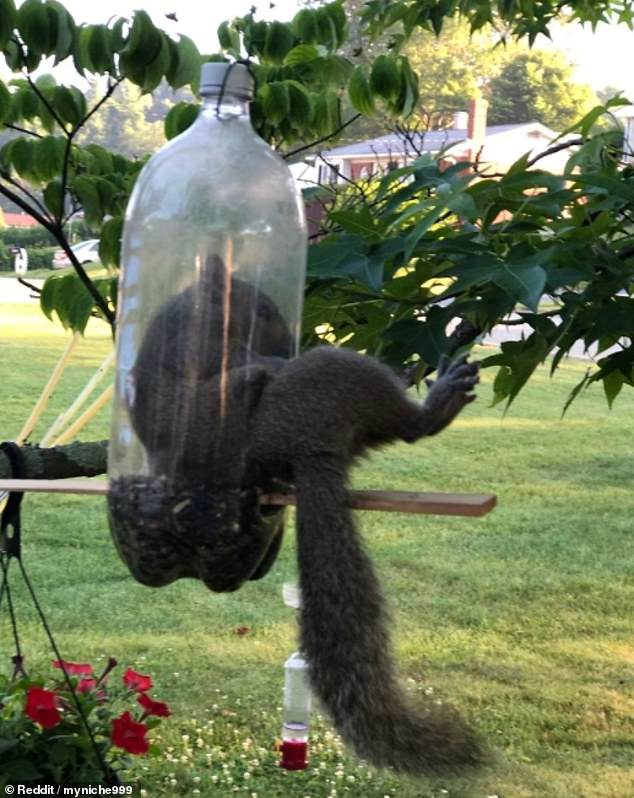 This cheeky squirrel, which was pictured in an unknown location, ended up stuck in a bird feeder. According to Redditor myniche999, it did eventually escape 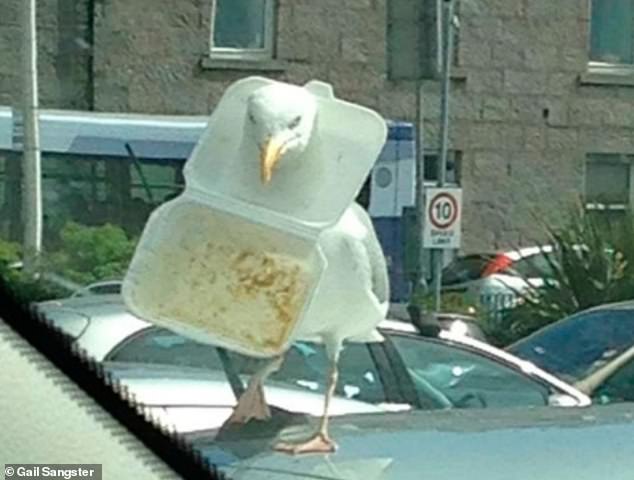 This seagull was pictured in Scotland by Gail Sangster, who shared the image online. The birds are well known for stealing food from seaside tourists, but this one got more than it bargained for and ended up with its head stuck in a takeaway container 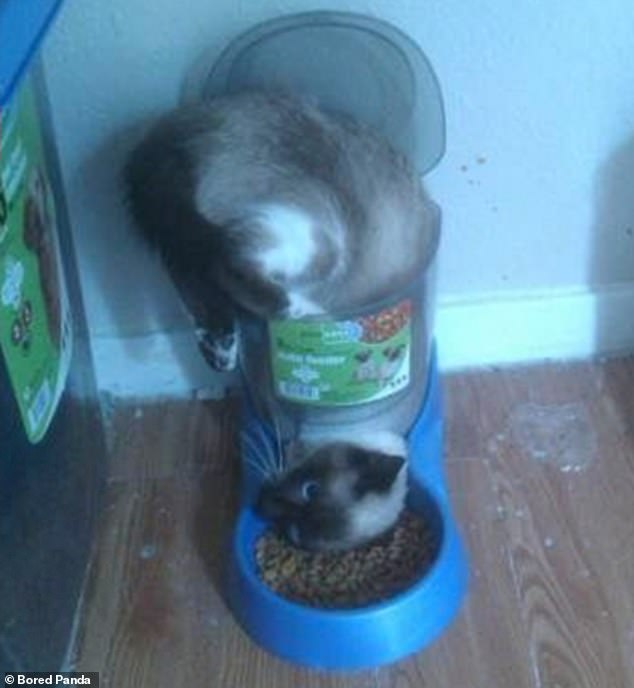 This cat, pictured in an unknown location, looked a little confused as it was seen with its head stuck through its food dispenser 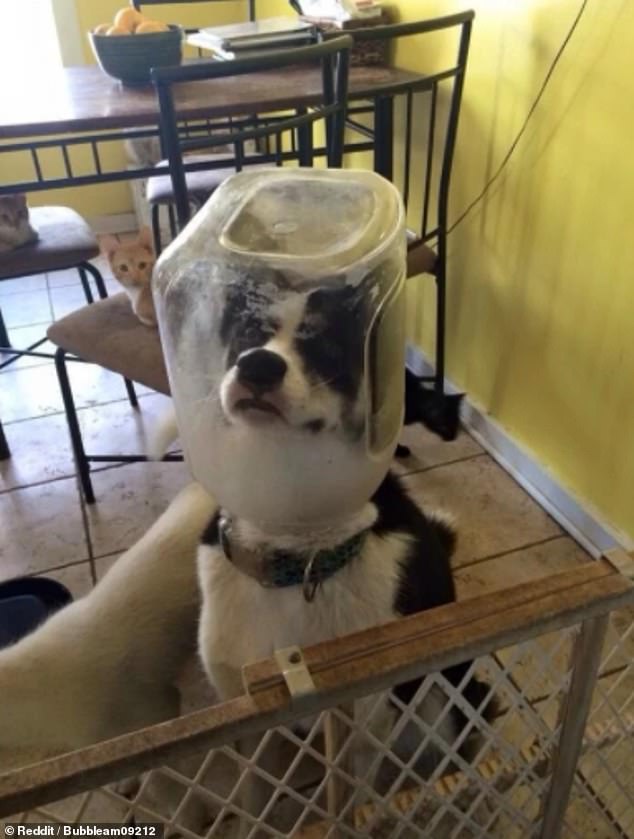 This naughty husky could not hide what it had done as it was pictured in an unknown location with an empty cat food container on its head. In the background, two bemused cats could be seen looking on 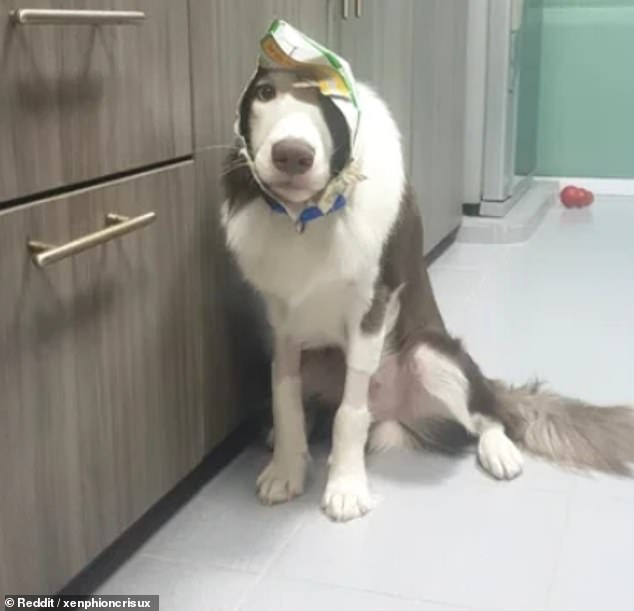 This dog, pictured in an unknown location, looked full of regret as it had to go to its owner for help after getting the remains of a box of fish fillets stuck on its head 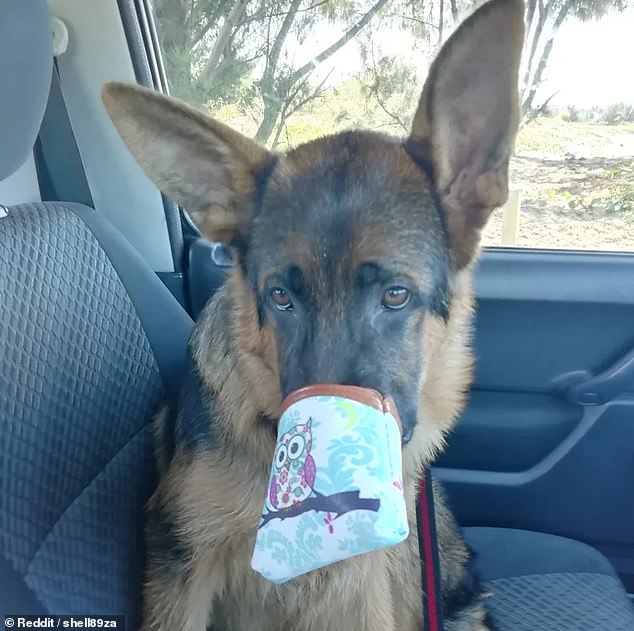 Guilty face! This German shepherd had regret written all over its face. Redditor shell89za said the pooch, from an unknown location, ‘tried to steal treats and got his head stuck’ 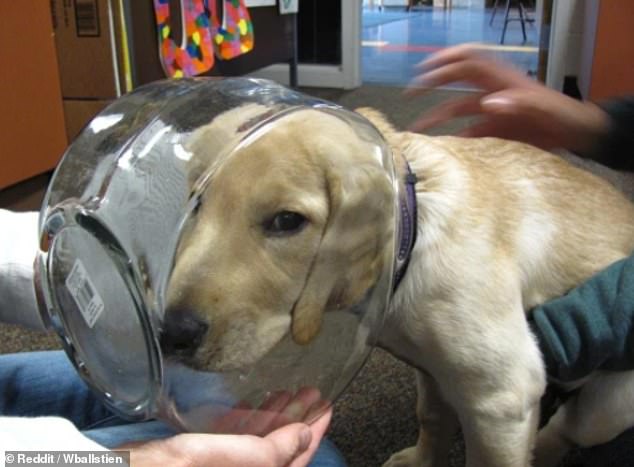 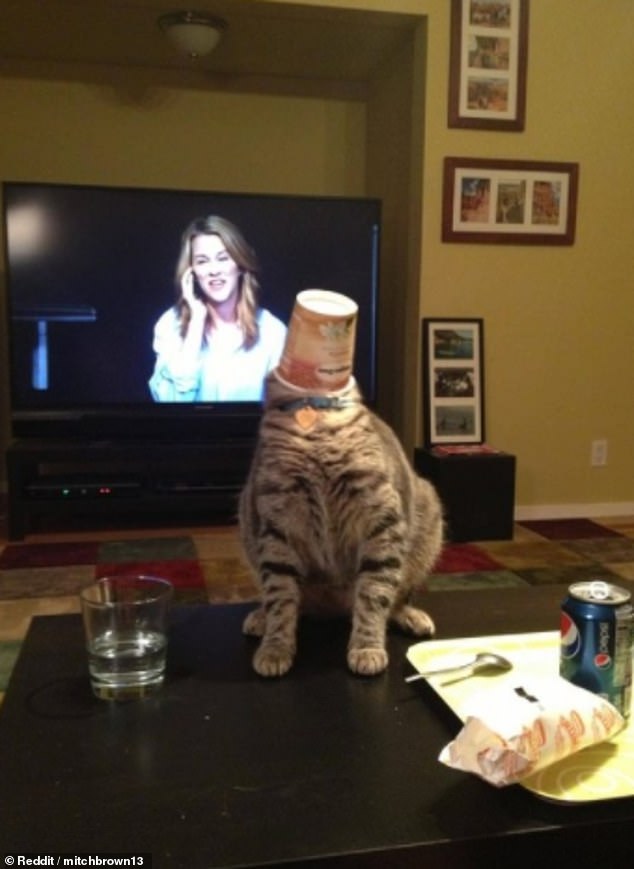 Redditor mitchbrown13 said their cat got its head stuck in an ice cream container and tried to back up but realised there was ‘less table than he thought’. The photo was taken in an unknown location 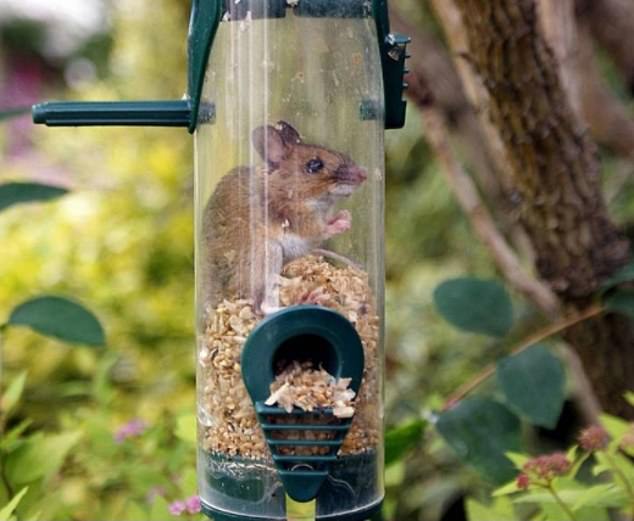 This tiny rodent somehow found its way into a bird feeder in London but looked more than happy to chomp away on the treasure trove of food. 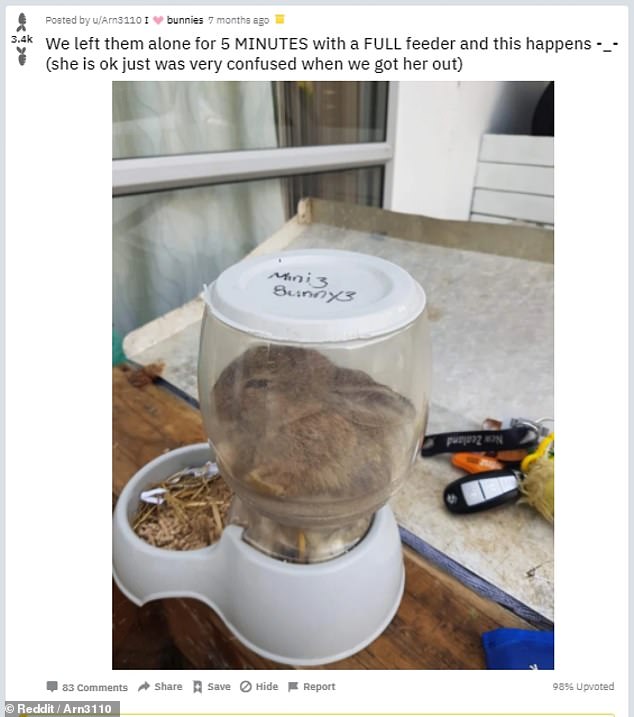 Here is yet another pet, this time a rabbit, which somehow found its way into its food dispenser. The hilarious photo was taken in an unknown location 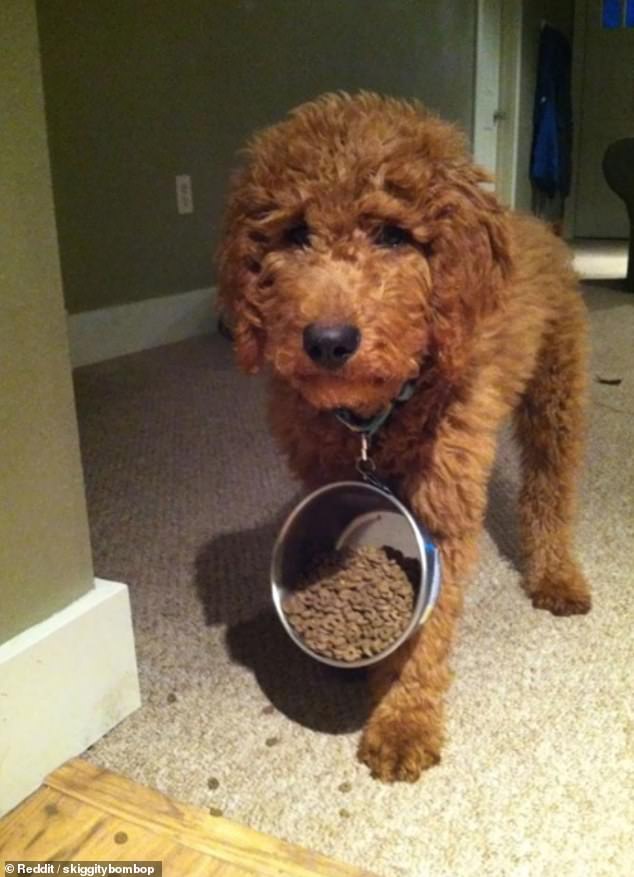 Redditor skiggitybombop said their dog sometimes gets his bowl caught on his collar and leaves a trail of food around the house. The photo was taken in an unknown location 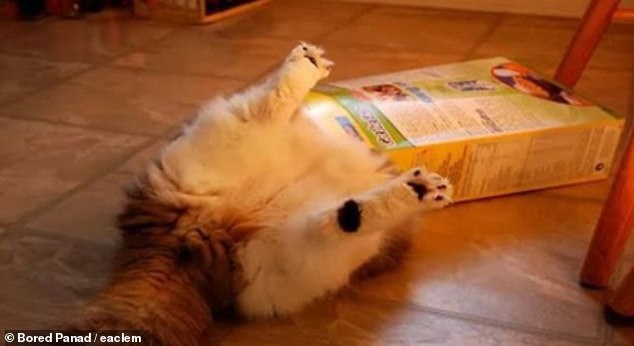 This cheeky cat, pictured in an unknown location, took the chance to venture inside a cereal box – but then got its head stuck 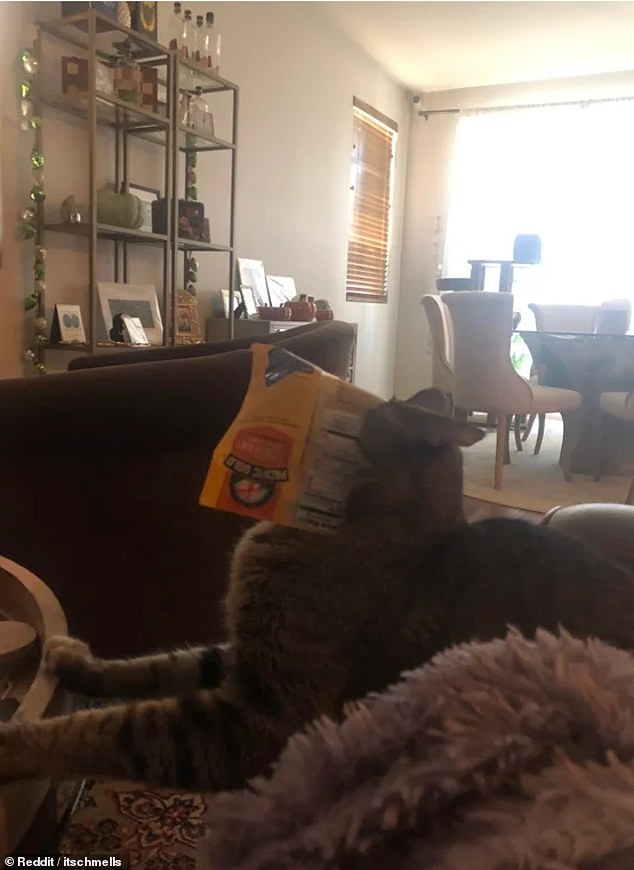 Redditor itschmells wondered ‘how many times in 20 minutes’ could their cat get its head stuck in an empty bag of beef jerky. The photo was taken in an unknown location 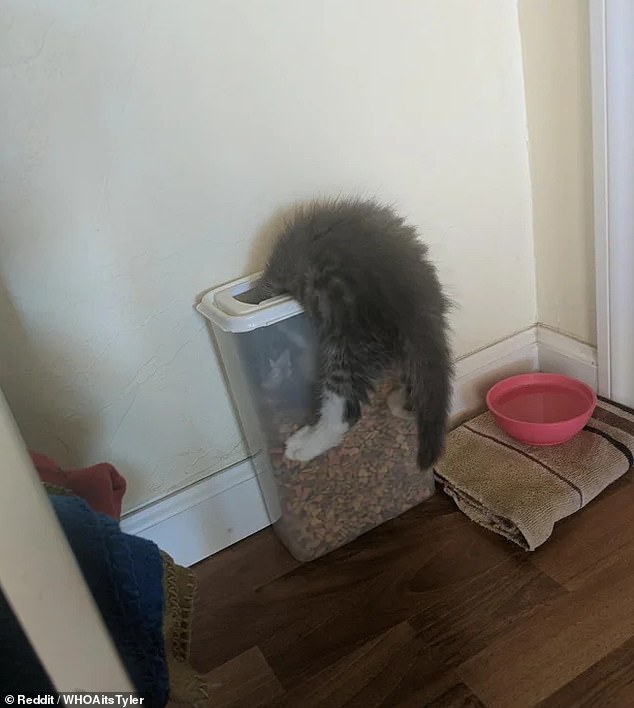 This cheeky cat ventured into a large container holding its food in the hope of having an extra portion. However its owner caught it in the act. The photo was taken in an unknown location