Could we see a Meghan Markle foray into U.S. politics?

It’s nearly been a year since Meghan Markle and Prince Harry were named the World’s Most Influential People in by TIME magazine. Jesús Enrique Rosas, aka The Body Language Guy on YouTube, analysed the Duke and Duchess of Sussex’s appearance on the front cover and explained how their body language, and the symbols their stances portrayed, suggested Harry was “hiding behind Meghan”.

“We’re going to look at the symbols used, and what might be photoshopped,” Jesús started in one of his videos.

“The first thing that strikes you about this image is that we’re not used to seeing them as being the same size – because they’re not, Harry is way taller and wider than Meghan, and in this case, the image implies that they share the same height.”

Jesus suggested Harry’s head had been “shrunk with photoshop so they would match”, and he analysed the other images from the same shoot, to compare sizes of features. 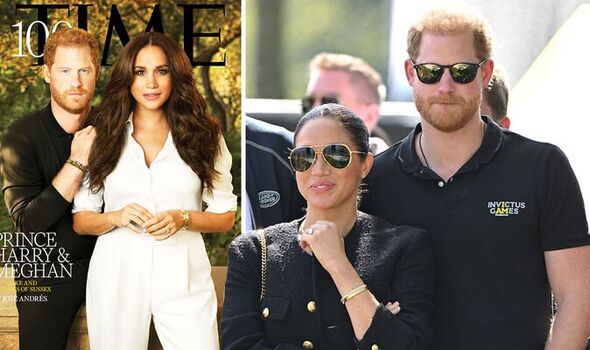 “If we used their features as a guide on both photos, you’ll notice Harry’s face was shrunk for the cover. There’s a slight offset for his eyes and hairline.”

He also used an older image of the couple to cross-reference their features: “It was not only this image, but there’s also another photo which shows the obvious difference in head [sizes].

“But then, the question arises, why make Harry look smaller so they can be perceived as the same size?”

The expert added: “He [Harry] is apparently sitting, but his left leg is nowhere to be found, it’s like there’s no space for it to exist [behind Meghan].

“Whoever did this, it wasn’t to show them as equals, it was to show Meghan as larger, and it’s easier to spot if we take a look at the area that both of them hold in the frame.

“You’ll see that Meghan’s body is almost double the presence of Harry’s, that’s reinforced by the fact she is wearing white and he is wearing black against a rather dark background, she is popping toward the front and he is blending into the back.

“The colours they chose to wear are pretty much standard for a couple; she chose to wear white, which is a symbol of purity and being sincere, that is the image she wants to project. He is wearing black, which is a very masculine colour so that’s nothing out of the ordinary.”

As for the symbols, the two create with their positions, Jesús continued: “Meghan forms a triangle with her head, hair and arms. 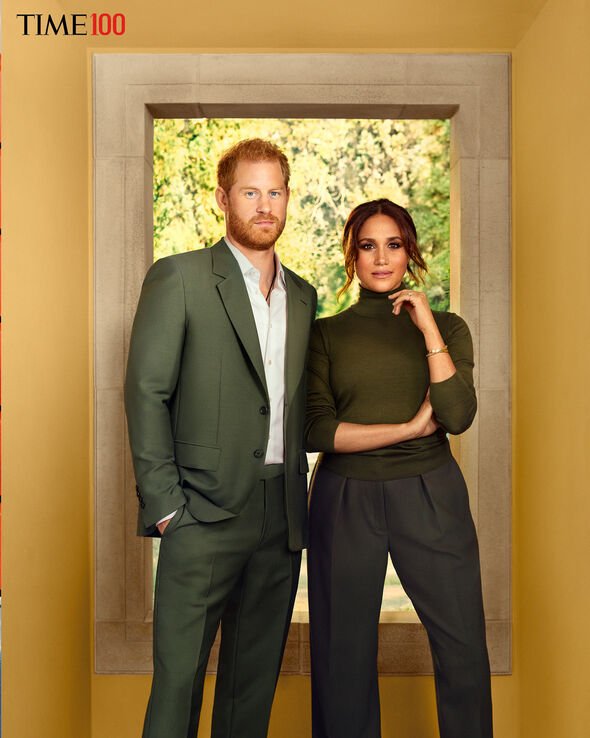 “A triangle is a symbol of ascension, and combined with the fact that you can see both of her legs, she’s standing solid, like pillars for the triangle. You add her wearing white and that’s the message of her rising, ethereal.

“But for Harry, it’s a different story, we already see that he’s blending into the background, like a forest.

“Using a natural background is on purpose, that quality of being natural and authentic is related to them,” he added.

“You can see only one of Harry’s legs, he is presented unbalanced. He also presents a triangle with is drawn with his flexed arm but in this case, it’s pointing downwards. So Harry’s symbols are perceived as down-to-earth and a bit unbalanced.

“I guess the intention of whoever produced this picture was to downgrade Harry from this monarchy-past and elevate Meghan at the same time,” Jesús suggested.

As for their body language, the expert said: “Meghan is absolutely upfront, dominating the cover space, and that’s great – an empowered woman.

“Harry is behind her, and usually that’s the set-up to take a picture of a man and woman because usually, a man is taller than her.

“But Harry’s body language is not one of protection, it’s like he’s hiding behind Meghan, there’s no smile on his face. And to be clear, a man pictured behind a woman it’s not being submissive per se.”

It is not known whether Meghan and Harry had any influence over the photos, the positions they held or the setup.

Dilys Ng, photo editor of Time100, did offer her opinion on the cover photograph and explained how it “captures their powerful dynamics as equal partners”.

Jesús Enrique Rosas is a Body Language expert and Persuasion consultant. He has written several books, and conducts masterclasses in body language analysis for Knesix Institute.