Paris: French President Emmanuel Macron says he has put Australia’s cancelled submarine contract behind him, declaring Anthony Albanese was not responsible for the controversy.

The French leader gave a warm welcome to his Australian counterpart at the Elysee Palace in Paris on Friday evening (AEST), conceding he was excited about resetting Franco-Australian relations following a very public falling out with former prime minister Scott Morrison. 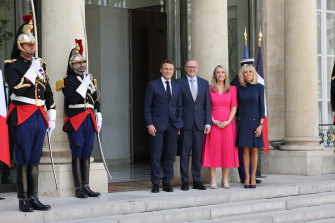 Macron and his wife, Brigitte Macron, warmly welcomed Albanese and his partner, Jodie Haydon, to the presidential palace, posing for photographers on the steps before beginning an hour-long bilateral meeting.

Speaking in French to the press before the meeting, Macron said he wanted to rebuild the relationship based on “trust and mutual respect after we all know was a difficult time”.

Answering a question yelled from the press gallery about the relationship, Macron replied: “We will speak about the future, not the past, he is not responsible for what happened.” 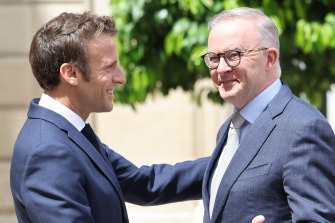 He welcomed the new Labor government’s “ambitious” commitment to climate change and said Indo-Pacific strategic co-operation between the two countries would be critical to the relationship.

Albanese thanked Macron for the warm welcome, saying his presence in France represented a new start for the two countries.

He hoped the relationship would be based on “trust, respect and honesty”.

The pair were due to dine at the Elysee Palace on Friday evening in a further bid to repair the relationship, which hit rock bottom following the announcement of a new alliance between Australia, the United States and Britain last year.

The Australian prime minister would not be drawn ahead of the meeting on whether he’d offer a formal apology to Macron over a furore sparked by the sudden cancellation of a $90 billion submarines contract last year. Instead, he declared that “everyone should be able to trust me”. 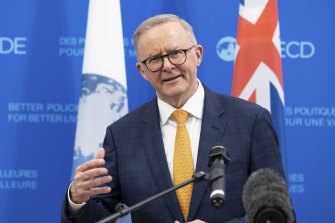 Albanese said it was time for the relationship between Paris and Canberra to enter a new era after the breakdown, saying he would deal with their impending discussions in “a professional and courteous way”.

“Part of keeping faith is keeping private conversations private,” the prime minister said in reference to a leaked private text exchange between Morrison and Macron last year that infuriated the French.

The pair were expected to kick-start discussions on a new road map for the relationship, with the aim of strengthening resilience in the region and contributing to peace and security amid a more assertive China.

France holds three territories in the South Pacific — New Caledonia, Wallis and Futuna, and French Polynesia, with the region home to 1.5 million French people, as well as 8000 soldiers stationed in the region.

Albanese said ahead of the meeting his government remained committed to the AUKUS pact and had no intention of reversing the decision. He intimated he would not be apologising to the French for that decision.

“What I want to do, though, is to make sure that we can move forward … It should be a relationship where we can rely upon each other … in which we can trust each other and mutually benefit,” he said.

“I’ve made it very clear what my position is about the way in which Australia engaged at a leadership level with friends.”

France was outraged that it was only informed of the new alliance hours before the public announcement was made, and later expressed fury at Morrison’s decision to leak a private text message from Macron after the contract was axed.

Macron told this masthead: “I don’t think, I know” when asked if he thought Morrison had lied to him in his handling of the issue.

Ministers in Macron’s party insisted France was “betrayed”, “stabbed in the back” and “deceived”.

Morrison said in reply that he had “broad shoulders” but he would not cop “sledging” of Australia’s integrity.

Looking ahead to a trade deal

Albanese said he would also discuss a free trade deal with Europe during his meeting with Macron.

When asked if French businesses could trust him after the “betrayal” and “deception” over the submarine contract under the previous coalition government, Albanese said “absolutely”.

“Everyone should be able to trust me, that’s the way I deal with people … that’s how I got to be prime minister,” he said.

At a meeting in Portugal on Thursday, Macron singled out Environment Minister Tanya Plibersek in front of a global audience, declaring that Australia was back in action on climate change. 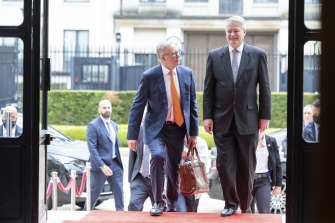 “You’re back,” Macron said, addressing Plibersek – a comment that prompted applause from those in the room. “Because we need you in the Indo-Pacific strategy, and climate and oceans is part of the strategy for us.”

Albanese then addressed the OECD council and was asked questions by members about Australia’s action on climate change, aid to Ukraine and international law in the Indo-Pacific.