Football’s biggest day is here — and no, doggone it, I’m not talking about the Patriots taking on the Rams in the Super Bowl. Since 2005, Animal Planet’s Puppy Bowl has been making non-sports and sports fans alike happy with the cutest Super Bowl pre-game show on TV. You won’t want to miss it, so what time is the 2019 Puppy Bowl? Animal Planet is going all out for the show, and has a whole day jam-packed with pawsome content.

The Puppy Bowl itself starts at 3 p.m. ET on Animal Planet. That’s when you can see the pooches compete to bring home a win. (I went to the Puppy Bowl last year, by the way, and they do really compete. There’s no TV magic pulling the game together. It’s just puppies running around with toys and refs hoping they wander into an end zone so they can score a point.) But well before the game starts, fans can check out the rest of Animal Planet’s Puppy Bowl lineup to get in the game time spirit.

Beginning at 11 a.m. ET, the "Training Camp Confidential" special airs, promising "insider facts and bonus scenes" about the training (read: playing) that goes into getting ready for the big game. Then, at 12 p.m. ET the "Where Are They Now" segment airs, to catch viewers up on what’s happening with previous Puppy Bowl stars now in their furever homes. At 1 p.m., the second-ever Dog Bowl airs, which is about the same as the Puppy Bowl — only it features slightly older pooches who still need adoption and love just as much as the adorable pups. 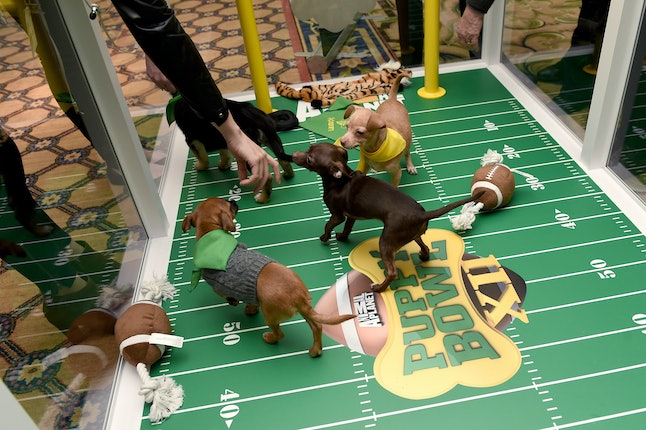 At 2 p.m., the Puppy Bowl pre-game show starts to clue viewers in on this year’s talent. It includes "interviews" with pups in the Ruff and Fluff locker rooms, because of course. And then from 3 p.m. to 5 p.m. ET, the Puppy Bowl game airs complete with a halftime show featuring kittens, a sloth, baby porcupines, a capybara, and a baby kangaroo, according to CNN. It’s not called Animal Planet for nothing.

But after you wait all year for this glorious day, you might be sad when the pawsome action comes to a close on Sunday evening. If you’re a fan of dog-themed events, fear not. There’s another all dogs, all the time TV special coming to NatGeo in April called BarkFest.

The fun never has to stop, really. And if you just can’t wait until puppy cuteness graces your screen on Sunday, you can flip through the players’ photos now to get your adorableness fix ahead of time. This year, 23 states and 51 animal shelters are represented in these adoptable dog teams — and each one of them is just. so. cute.

And, since the Puppy Bowl concludes before the real Super Bowl begins at 6:30 p.m. ET on CBS, you can watch cute dogs run around all day and still catch the Big Game. It’s truly the best of all worlds when puppies are involved.