Whether they sparked a smile or had you tearing up, the feel-good stories of 2018 are ones to be remembered.

Here are the moments that took center stage in our hearts and on “Good Morning America.”

Roman Dinkel, the toddler who showed his dog he can walk.

Roman spread joy across the globe after a video of him celebrating his first steps alongside his dog racked up millions of views on Facebook.

“Look, Maggie! I’m walking, Maggie!” Roman, 2, can be heard telling his pup in the video. 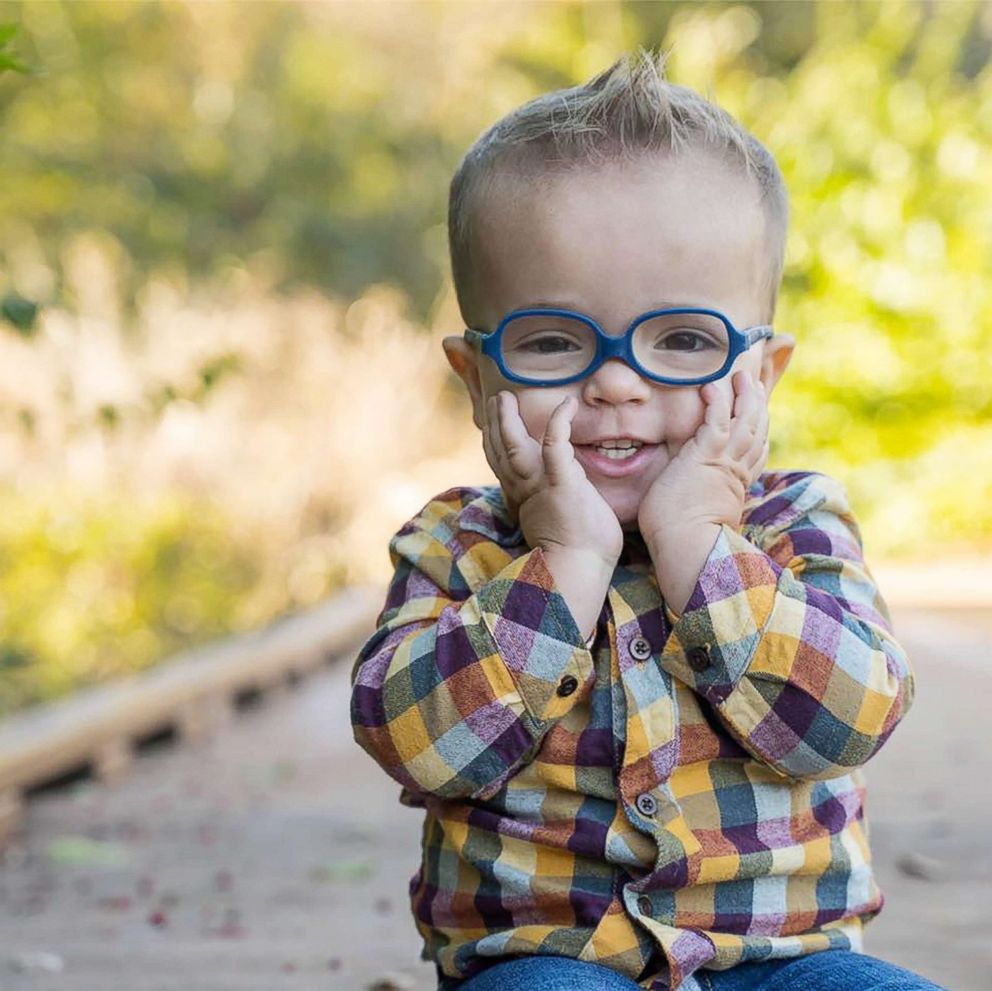 Roman was diagnosed with spina bifida when his mom, Whitney Dinkel, was 20 weeks pregnant with him. Doctors told the Dinkels that there was a chance that Roman wouldn’t be able to walk.

Since then, Roman has persevered and now, he’s walking without crutches, aka his “sticks.”

“As a parent of a child with spina bifida, it’s something you might never get to see,” Adam Dinkel said of his son’s walking. “It’s nice to see that he’s going to be able to run around with his brother and sister.”

Cyn’niah Burton, the girl with the infectious personality.

Cyn’niah, aka Little Cee Bitty Bee, warmed hearts near and far after videos of her singing, dancing, making silly faces and doing “makeup tutorials” racked up hundreds of thousands of views on Facebook.

The 3-year-old was born with a rare genetic disease called osteogenesis imperfecta type 3, which causes her brittle bones to fracture easily. 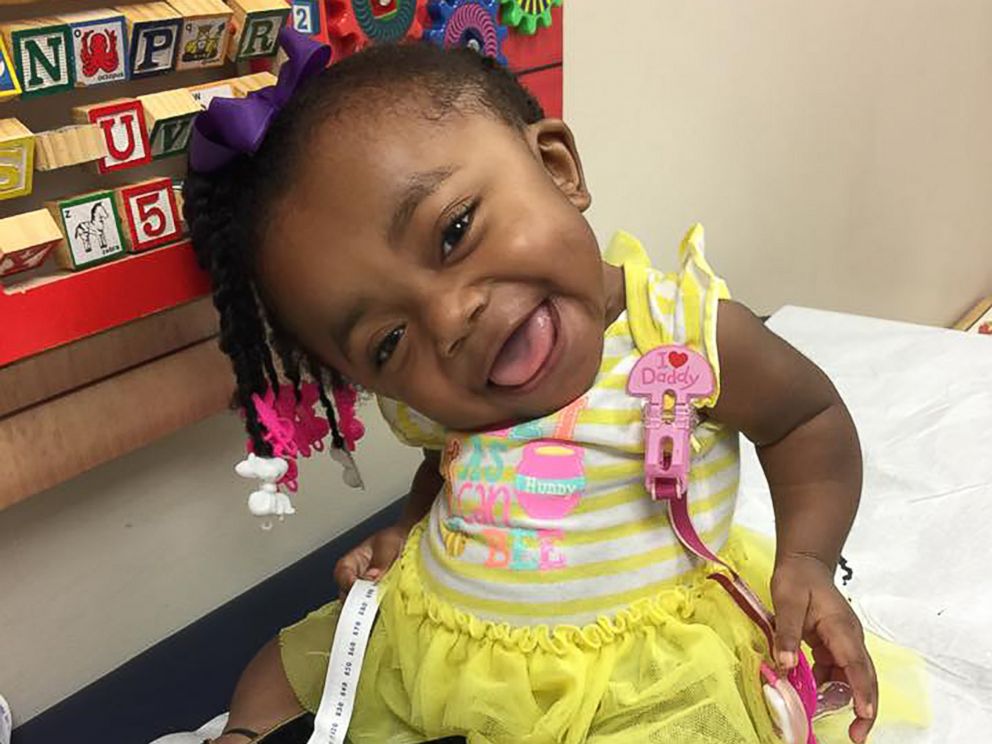 Because her bones are weak, Cyn’niah is unable to crawl or walk. But despite her condition, Cyn’niah’s mom noticed her charm and decided to create a Facebook page to document her adventures.

“She would constantly make me laugh and I was like, ‘Oh my gosh, no one will believe me that this little 3-year-old girl with this condition would do this,'” Destini Jackson of Woodville, Mississippi, told “GMA.” “She really is a character.”

The police officer who adopted a baby from a homeless woman he helped while on duty.

Officer Jesse Whitten, 33, of the Santa Rosa Police Department, said he met the biological mother of baby Harlow last spring while she was pregnant with the child. The woman was homeless and suffering from a drug addiction. 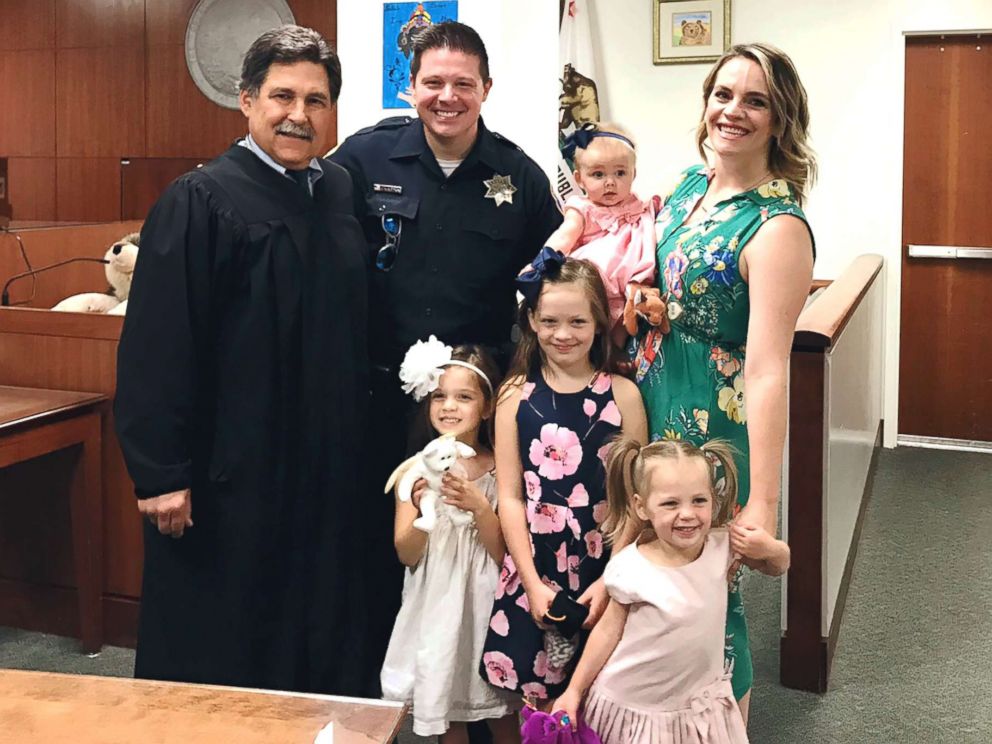 Whitten said he was asked by the baby’s mother, whom he had previously met while on patrol, if he and his wife Ashley — who were already parents to three girls — would adopt her newborn.

“I fell in love right away,” Whitten told “GMA” about his daughter, Harlow. “She’s so adorable. She will cry if she needs something, obviously as babies do, but as soon as we would touch her, she’d immediately stop crying. She knew right away that she was safe.”

The 10-year-old girl who had an emotional reaction to finding out she would be adopted.

After three years in foster care, Ivey Zezulka cried tears of joy when she learned her foster family would soon become her forever family.

And not just for herself: along with Ivey, her biological brother and sister -— Kai, 3, and Lita, 2 -— will also be adopted by Paige and Daniel Zezulka of Athens, Georgia. The adoption of all three children was finalized in August. 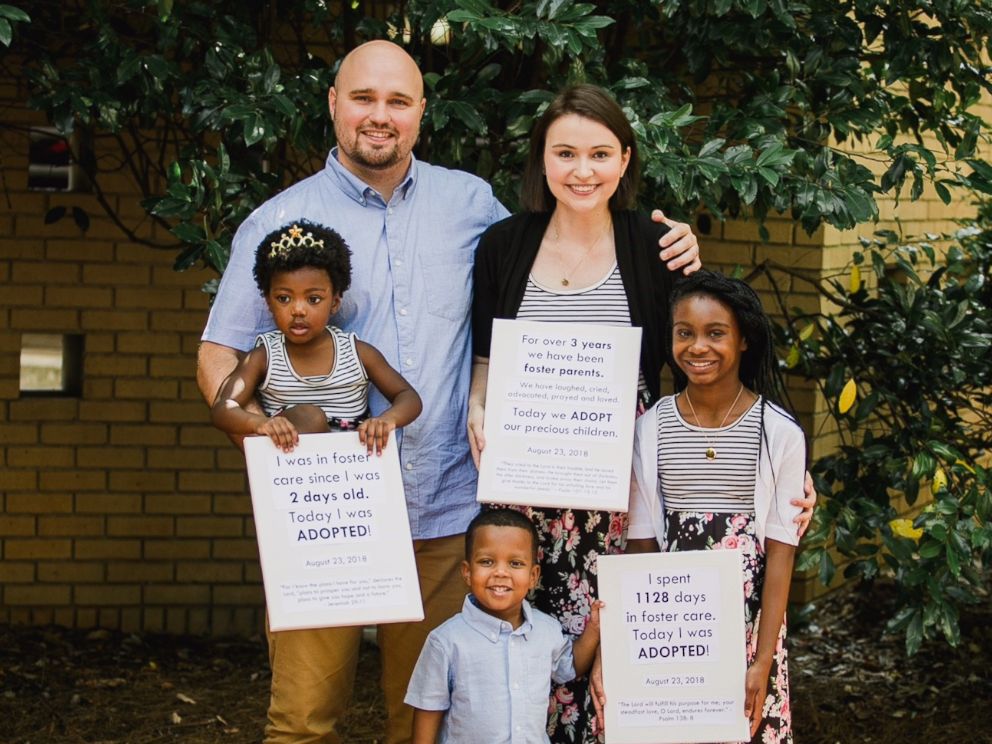 “Ivey is so wonderful and special, and we are so blessed she is our daughter,” Paige Zezulka told “GMA.” “Sometimes people are afraid to consider older kids, they think they may be ‘damaged.’ We hit the jackpot.”

The video of Ivey’s reaction to finding out she’d be adopted as posted to Facebook where as of August, was viewed five million times.

This 13-year-old who thanked his parents in a sweet adoption-day video.

Mom Sara Cozad was not expecting the heartfelt speech that came from her Dayshawn, 13, on the day Cozad adopted him and his brother.

But Cozad, her husband, Stuart Shank, and the rest of the family were moved to tears when Dayshawn spoke. The incredible speech was captured by Caleb O’Halloran of NW Creatives. 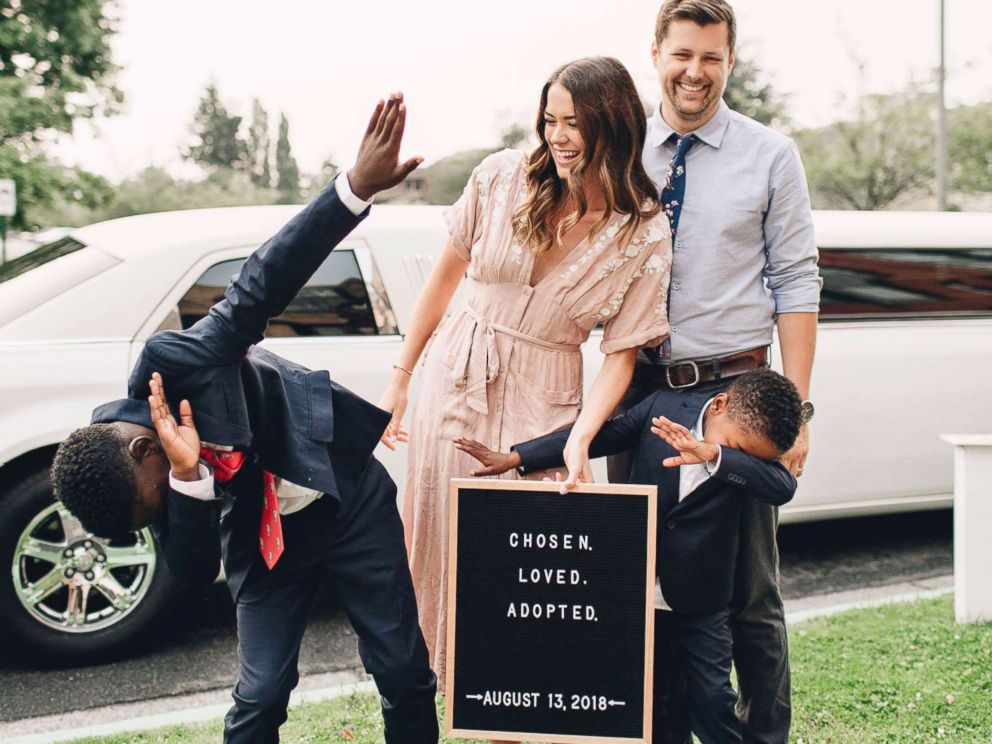 “They all love us,” Dayshawn told the judge, speaking about himself and his brother, who also was adopted that day.

A boy reveals he’s going to be a big brother on the same day he’s adopted.

In a sweet photo, Jeremiah Dickerson, 4, who was adopted into a loving family revealed on that same day that his new parents were now expecting his baby sister.

Mom Jordan Dickerson of Memphis, Tennessee, met Jeremiah in January 2017 while he was staying at Le Bonheur Children’s Hospital, where she works as a pediatric nurse.

“I knew there was something different about him,” Dickerson said of her son. “I couldn’t get him out of my head. I called my husband and said, ‘Pray that we can bring Jeremiah home.'” 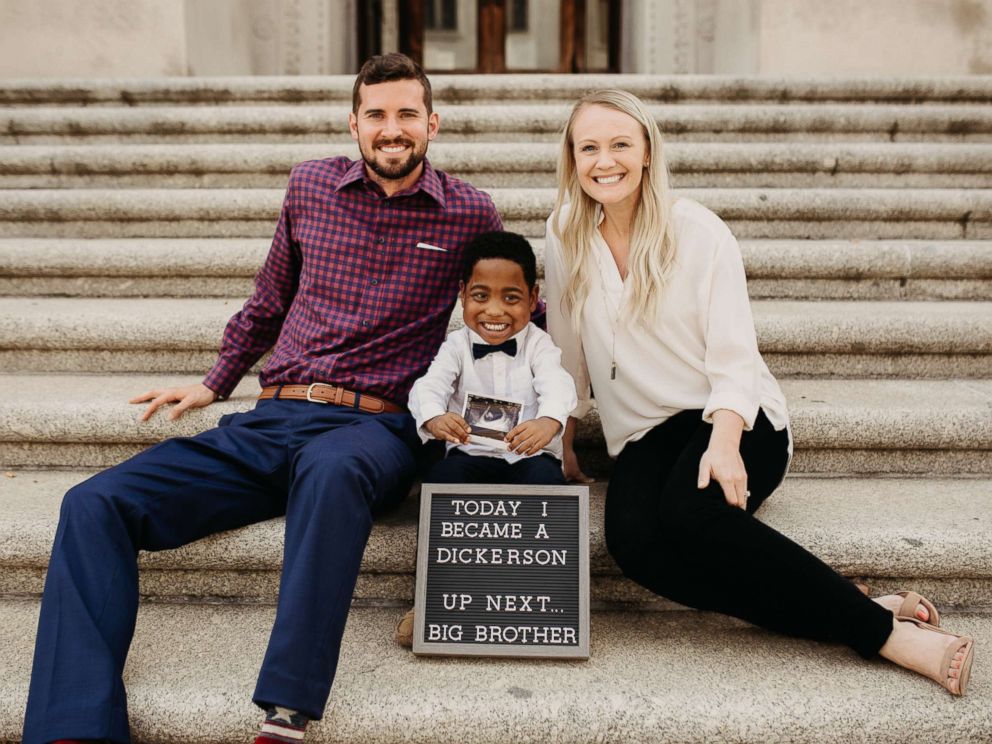 The Dickersons underwent the necessary foster care training and background checks to have Jeremiah live with them and on July 16, 2018, Jeremiah was officially adopted by Dickerson and her husband, Cole.

When the proceedings were over, Jeremiah proudly posed with a sign that read, “Today I became a Dickerson. Up next … big brother.”

“It was an emotional day,” Dickerson recalled. “In the end, Jeremiah has blessed our family more than we could ever imagined.”

Retired teacher is surprised by a former student with a kidney.

On Oct. 7, George Labecki, 63, was surprised by Lindsay Arnold Wenrich, 34, who revealed that she’d be donating a kidney to him. 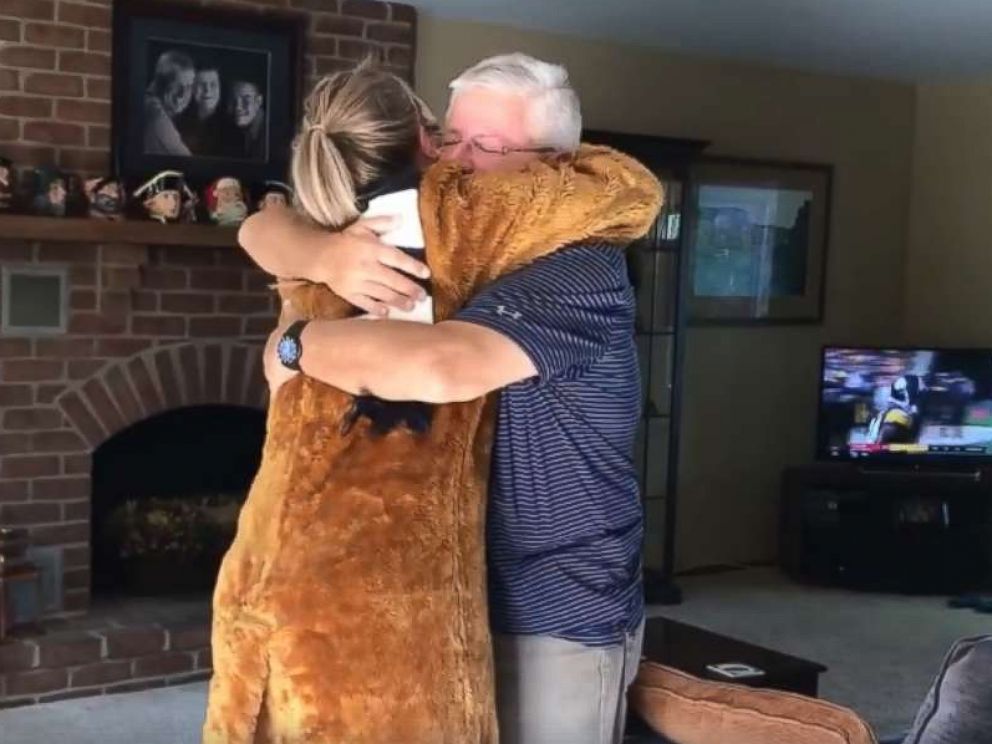 “I was stunned,” Labecki of New Cumberland, Pennsylvania, told “GMA.” “I was overpowered about the absolutely grand-sized [gesture] of what she was about to do for me. I was speechless, absolutely speechless.”

Labecki said that he’s experienced health issues associated with his kidneys since he was a teen. But in January 2017, the organs began to fail and he was later placed on a transplant list.

Wenrich learned Labecki was in need of a kidney through a Facebook post and decided to give him one of hers.

The tearful moment was captured on video, and on Oct. 26, the transplant was a success.

Skye, the toddler who walked down the aisle at the wedding of the woman who saved her life.

Guests were in tears at the June ceremony when Skye, 3 at the time, served as the flower girl for Hayden Hatfield Ryals, 26, who was Skye’s bone marrow donor.

Skye Savren-McCormick was diagnosed with juvenile myelomonocytic leukemia in March 2016, just before her first birthday. That same year, she had her first bone marrow transplant, from Ryals, and later, a vital infusion of cells. Skye’s final transplant was April 2017. 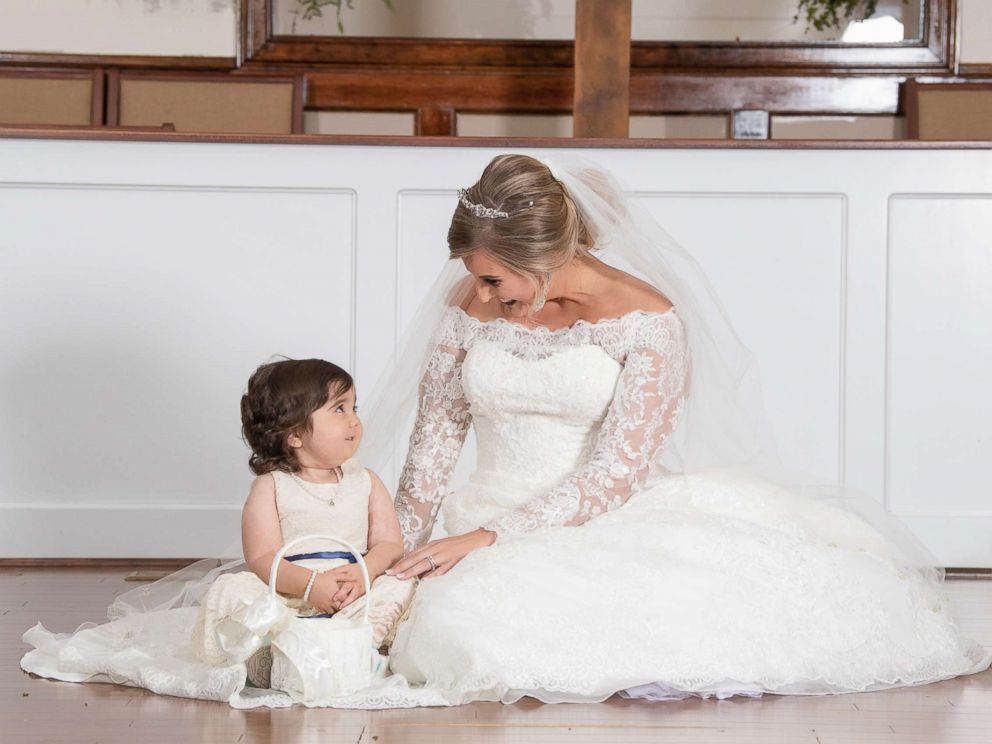 Skye’s mother, Talia Savren-McCormick, said that Skye wouldn’t have made it to her final transplant if it had not been for Ryals.

After connecting through Be the Match, Ryals and the Savren-McCormicks exchanged texts and Facebook messages. Ryals sent Skye a gift for her third birthday and inside the card was an invitation asking the toddler to be the flower girl at her June 9 wedding.

“They are going to be part of our lives forever,” Savren-McCormick said. “She saved our daughter’s life.”

Dance challenges that touched our souls

Girl fighting cancer breaks it down with mom to Drake’s “In My Feelings.”

With 2.7 million video views and counting, Abigail Lewis, 8, and her mom, Alyssa Lewis, performed the viral dance at Arkansas Children’s Hospital in the midst of Abigail’s cancer treatments.

Abigail was diagnosed earlier in 2018 with Ewing’s sarcoma and began chemotherapy in June, Alyssa Lewis said. 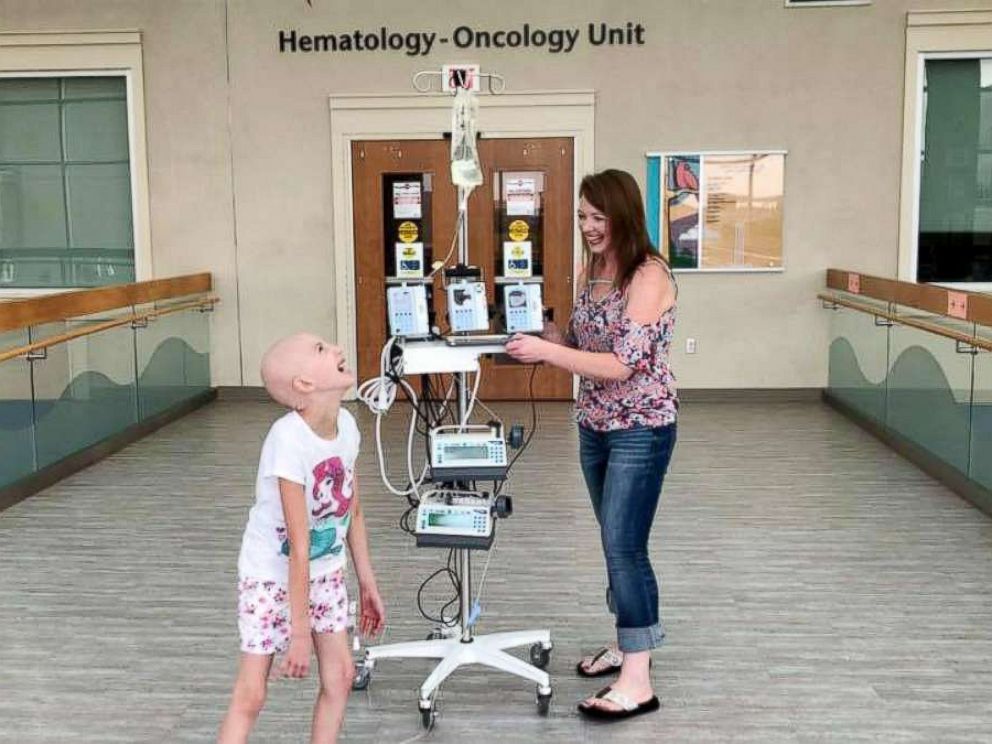 In the video, Abigail smiles widely as she wheels her IV down the hall. She and her mom then performed the #KikiChallenge dance trend.

“It has been months since she and I have been able to dance together,” Alyssa Lewis of Bentonville, Arkansas, told “GMA.” “So when we did this, it was a very personal connection we got to have.”

A dad performs the most epic ‘Level Up’ dance for son leaving hospital after chemotherapy.

Kenny Thomas, 34, celebrated his 1-year-old son Kristian’s release from the hospital in the most incredible fashion as he danced to Ciara’s “Level Up” after the toddler recovered from his first round of chemotherapy.

Kristian was diagnosed with leukemia June 19 and spent 32 days at the Children’s Hospital of Philadelphia. 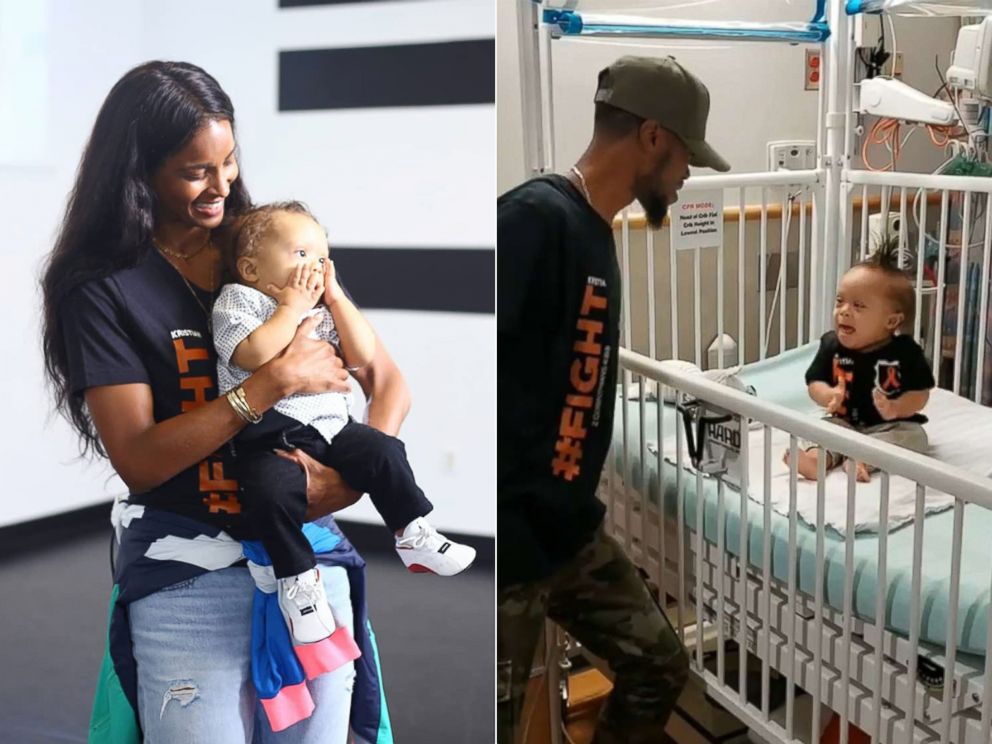 Thomas is head cheorographer and artistic director of The Level Dance Complex in Pennsauken, New Jersey. The adorable video of him dancing for his baby was viewed more than 2.5 million times on Instagram as of July.

And on August 2, Ciara herself crowned Thaoms and Kristian the winners of her “Level Up” dance challenge.

“I didn’t know what was going on and boom — she [Ciara] walked through the door,” Thomas told “GMA.” “It was a surreal moment for us.”