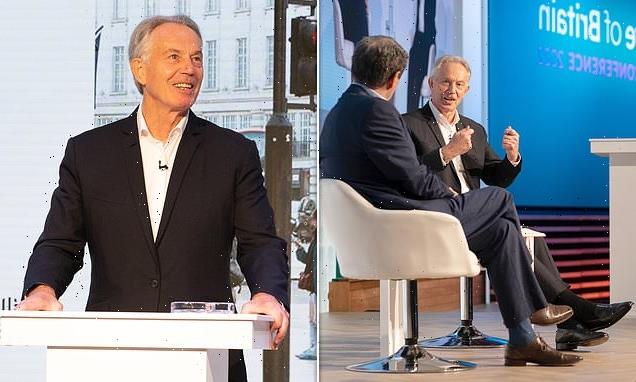 The hair is combed into a Dracula-style widow’s peak now, the skin stretched tautly across a face that is rather reminiscent of a Terrahawks puppet.

The voice is thinner, more papery and there is definitely something of the fading diva about him. But all the old mannerisms are there: the deep, angular frowns and the extravagant arm-waving, while those marble-blue eyes still flicker with messianic zeal.

Tony Blair’s message, too, was a familiar one. Britain is broken and it’s only me, me, ME! who can fix it.

Mr Smoothie’s been trying to flog this same old snake oil in one form or another since he left office, of course, and now we have the former premier’s latest vanity project: the ‘Future of Britain 2022’ conference. Alarmingly, there is every indication he is planning on it becoming an annual fixture.

Organisers: the Tony Blair Institute for Global Change. Not to be confused with the Tony Blair Africa Governance Initiative or the Tony Blair Sports Foundation, or indeed any of the numerous other publicity vehicles he launches with great frequency on an unsuspecting public. 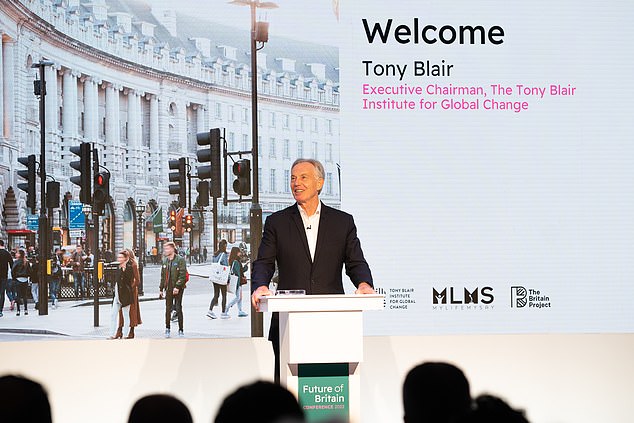 Blair’s message was a familiar one. Britain is broken and it’s only me, me, ME! who can fix it

Our venue was the Park Plaza, the sort of middling Westminster hostelry where, once upon a time, a rakish MP might have popped in for a lunchtime assignation with their parliamentary researcher.

Let us be clear. This was not the launch of a new party devised to grab the centre ground a la Emmanuel Macron. No, no, not at all.

That was an idea Blair had been heavily flirting with when the then leader Jeremy Corbyn was marching Labour off a cliff.

But there was no need for it any more. Sir Keir Starmer was doing an ‘amazing job’, Blair insisted. Though he’d be doing even better if he listened to Labour’s most successful leader a bit more, obviously.

Instead, this event was pitched as a sort of Glastonbury for centrist bores. A safe space for Blairite types to talk freely about ‘progressive solutions to the problems facing the country’ without people laughing in their faces.

Actually, it felt a little more sinister than that. More like a collection of shadowy bureaucrats and unelected officials hell bent on conspiring to determine our future.

Former BBC journalists Emily Maitlis and Jon Sopel, who recently jumped ship, chaired several sessions, no doubt for a stonking fee. Indeed, not since Fleetwood Mac last re-formed has there been such a gathering of egos under one roof.

Naturally, Mr Blair (he seems to have dispensed with the long-awaited ‘Sir’ already) was the star turn, compered by Sopel.

He appeared at 4.15pm sharp, delivering that usual naff rock star wave as he came on stage. ‘I’m grateful for you all hanging about to hear me,’ he informed the audience in suitably faux self-deprecating tones.

Why else were they there? We can be confident it wasn’t to listen to dry-as-a-dog-biscuit former lord chancellor David Gauke giving his thrillingly titled talk ‘Problem solving through consensus’. 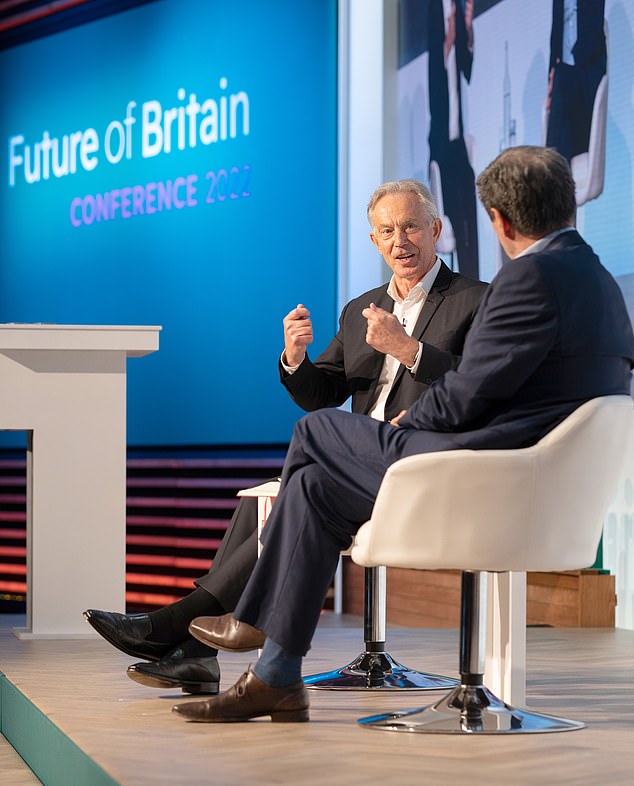 The gist of his message was that there is a gaping hole in British politics. How it should be filled, he didn’t really articulate. Most of what he said was conceptual nonsense

Britain was in a ‘tight spot’, Blair informed the faithful.

‘The gulf between what politicians are talking about and what the country needs is vast.’ They needed to be more like him, in other words.

The gist of his message was that there is a gaping hole in British politics. How it should be filled, he didn’t really articulate. Most of what he said was conceptual nonsense. ‘When the world’s changing fast, you’ve got to learn and you’ve got to go deep,’ he said at one point. Eh?

Sopel wondered whether the Government’s agenda was really that far apart from Blair’s. They’re fully on board with achieving net zero. Health spending has continued to go through the roof on their watch. ‘Oh, not everything they do is wrong,’ Blair replied defensively. So why didn’t he just set up a new party moulded in his own image?

He muttered something about the two main parties being too established.

He’d seen how those Labour MPs who set up Change UK during Corbyn’s leadership fell flat on their faces. I doubt his gargantuan ego could handle suffering a similar fate.

Or perhaps he feels too old. Blair seemed embarrassed by his advancing years – he’s 69 – which he mentioned on several occasions. And then the energy returned. He announced Brexit (or ‘Breggs-it’ as he pronounces it) was done.

There was no turning back, for a generation at any rate. And personally, he was no longer interested in trying to reverse the referendum result.

All I can say to that is don’t you believe it. Everything about this slickly arranged jamboree reeked of a man on a mission who is very definitely back on manoeuvres.