His clan gathered like the Kennedys du jour – with just a hint of Kardashian-like opportunism: HENRY DEEDES looks on as victorious Boris Johnson takes centre stage

The new leader of the Conservative Party hopped on stage and gave the returning officer a meaty shake of the paw.

The ovation he received seemed to embarrass him at first. He looked startled, a muntjac stunned in the glare of a 4×4’s headlights.

As he waited for the applause to simmer down, his eyes narrowed into slits as though capturing a mental Polaroid of the moment for posterity.

But then Boris Johnson had waited a long time for this moment. For a while, destiny appeared to be toying with his ambitions. Few would forgive him for trying to preserve it for posterity. 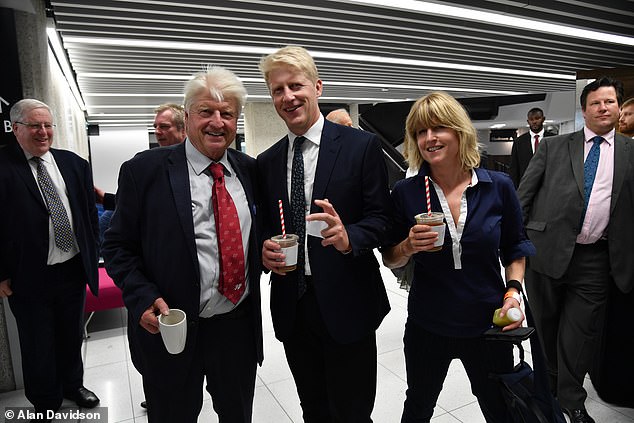 Down in front sat the family – father Stanley, sister Rachel, brother Jo (al pictured). The Kennedy clan du jour, with a hint of Kardashian-like opportunism. No sign of maitresse-en-titre, Carrie Symonds. I expect it’ll be a couple of weeks before aides weave her into the plotline 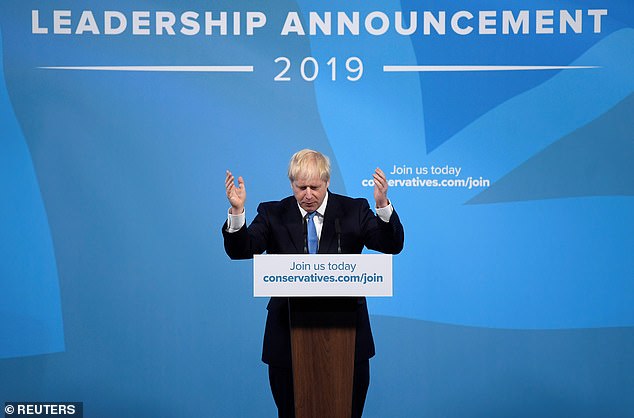 Boris Johnson (pictured on stage) had waited a long time for this moment. For a while, destiny appeared to be toying with his ambitions. Few would forgive him for trying to preserve it for posterity

The result of the leadership contest was announced in the Queen Elizabeth II Conference Centre, that lifeless slab of granite and glass which sits like an embarrassing stain amid the towers and spires off Parliament Square.

The place was rammed with MPs and Sloaney volunteers, the mood buoyant with a Pimm’s and mint juleps on the front lawn flavour. Beige suits and summer dresses everywhere. Sinewy ex-defence minister Gavin Williamson prowled the floor with the proprietary air of an overtly ambitious restaurant Maitre D.

A video appeared on the screens, replaying stirring speeches made by all the previous Conservative prime ministers since Churchill. Except Ted Heath, that is. They probably couldn’t find one.

Shortly before midday the candidates appeared, ushered on stage by 1922 committee chiefs Charles Walker and Cheryl Gillan. Earlier, Walker pleaded for the party to be nicer to the next prime minister than they had been to Theresa May. Cue a hearty round of ‘yer, yers’ from several MPs who’ve been spitting unrefined venom about Mrs May since December. Nest of vipers this place, isn’t it?

Jeremy Hunt walked in first, flashing his waiting missus a pair of jumping eyebrows. Boris lingered behind, several expressions on his face fighting for supremacy. I detected quiet satisfaction.

The outcome, which Gillan announced, was never in doubt. Boris by nearly two votes to one. A cakewalk. ‘An extraordinary honour and privilege,’ was how the victor described his new job, wafting his palms in an attempt to subdue the cheers around the auditorium. ‘The campaign is over and the work begins.’ 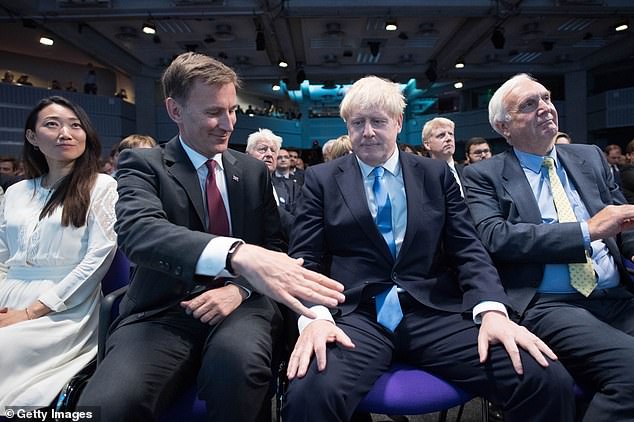 His hair was arranged in a Friar Tuck-inspired pudding bowl. A blue tie had been yanked around his neck, under duress by the looks of it. The PM-elect could have been an overgrown child posing for his school portrait.

For ten minutes he spoke languidly from a script produced from his coat pocket, violently jabbing his finger for emphasis. I’ve seen Sir Simon Rattle wield a conductor’s baton less vigorously. It was breezy, ‘I thought I’d just say a few words’ kind of stuff. No great philosophising, not much on Brexit.

No doubt we’ll get something beefier this afternoon when he hovers on the Downing Street threshold.

There were jokes, as there always are. Someone had pointed out to him that his campaign mantra ‘deliver, unite, defeat [Corbyn]’ was not the best slogan as it spelt ‘dud’. ‘But they forgot the final ‘e’ – for energise,’ he said. ‘I say to all the doubters: dude, we are going to energise the country!’ To paraphrase the late movie mogul Sam Goldwyn, were Harold Macmillan alive today he’d be turning in his grave

Down in front sat the family – father Stanley, sister Rachel, brother Jo. The Kennedy clan du jour, with a hint of Kardashian-like opportunism. No sign of maitresse-en-titre, Carrie Symonds. I expect it’ll be a couple of weeks before aides weave her into the plotline.

There was some disingenuous praise for Mrs May. Very Bullingdon touch, that. Damn your enemies with faint praise. Rightly, Boris hailed Hunt’s campaign which he said had produced some good ideas, ‘all of which I’m going to steal forthwith’. 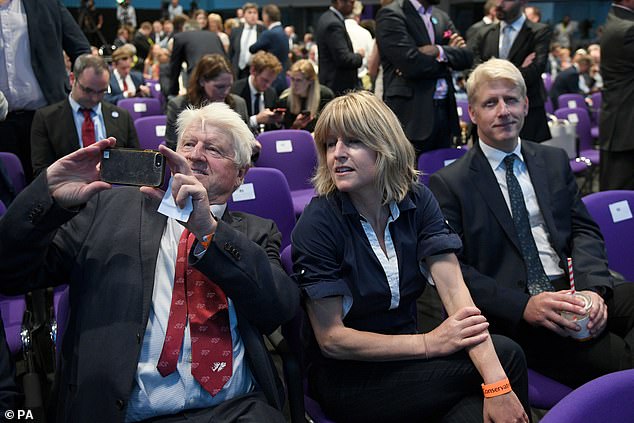 Fittingly, for a leader who many see as a leap of faith from a desperate party, he ended on a note of blind optimism.

‘I look at you this morning and I ask myself: do you look daunted? Do you feel daunted? I don’t think you look remotely daunted to me. I think we know we can do it and the people of this country are trusting us to do it and we know that we will do it.’

And with that, MPs began filtering out into the scorching lunchtime sun, no doubt conjuring up ways to impress their new master. Today, an appointment with the Queen beckons.

Then the whole country will need this intelligent, charismatic, but sometimes all too jocular character to finally get serious.