Helen Klaben, looking for adventure, left Brooklyn at age 20 in the summer of 1962 and drove to Alaska with a woman she had met through a newspaper ad. After several months in Fairbanks she was ready to move on, perhaps to explore Hong Kong or India.

But first she had to reach San Francisco, her portal to Asia, so to get there she took a flight from Fairbanks to Whitehorse, the capital of the Yukon Territory, in early 1963 on a single-engine airplane piloted by Ralph Flores, an aircraft mechanic from California, sharing the expenses with him.

After being grounded for three days by snowstorms, they took off on the next leg, to Fort St. John, British Columbia, on Feb. 4, despite still-dangerous weather.

Flying for hours through blinding snow and harsh winds, Mr. Flores tried to find his bearings by taking the plane above the clouds. When he descended, he hoped to follow landmarks or the path of the Alaska Highway to reach Fort St. John.

But Mr. Flores, an inexperienced pilot, did not know how to fly using only the aircraft’s instruments — an essential skill in poor weather conditions — and did not bring adequate food or basic survival gear, like an ax, sleeping bags or a rifle. (A few months after the crash, his pilot’s license was suspended for a year by the Federal Aviation Administration.)

“I knew he didn’t know where he was, and he wouldn’t say we were lost, but I knew we were,” Ms. Klaben later said in an interview with The Saturday Evening Post. “We were flying by a mountain and I saw trees right below us. I knew we were going to crash.”

Mr. Flores recalled, also to The Post: “I said out loud, ‘O.K., Helen, here it comes.’ I saw the right wing tip hit the trees and I just closed my eyes.”

The plane crashed into a desolate, forested stretch of a mountainside near the Yukon-British Columbia border.

But they not only miraculously survived the crash, Ms. Klaben suffering a broken left arm and Mr. Flores fracturing his jaw and several ribs; they also went on to endure 49 days of subzero temperatures, some of that time huddled inside the cabin of the plane’s wreckage, some of it in a lean-to Mr. Flores built, until they were finally rescued. 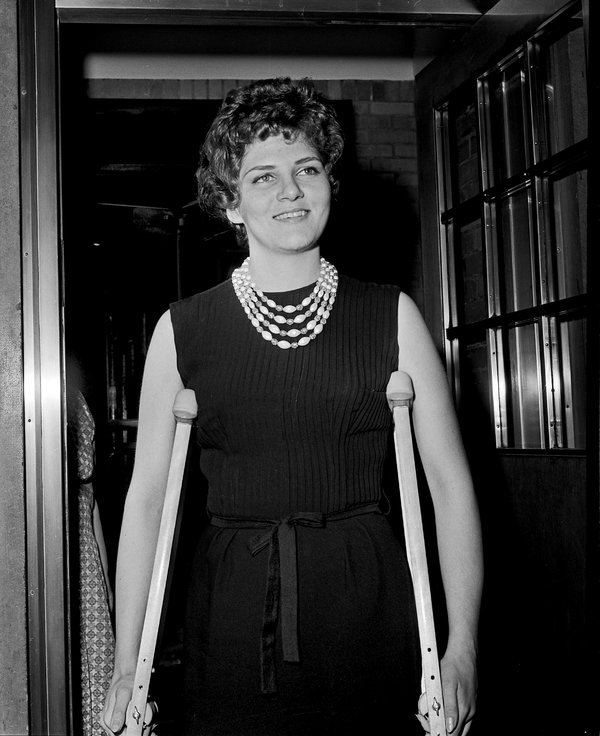 Her son, Dr. Stephen Kahn, said the cause was histiocytic sarcoma, a rare blood cancer.

Ms. Klaben was born in Brooklyn on Dec. 18, 1941. Her father, Charles, a customs agent, left the family when Helen was a young child, and her mother, Ida (Hochman) Kahn, was a homemaker who rented out half their house, in the Bensonhurst section, to make ends meet. Her four older brothers also helped support the family.

As a child, Helen was fearless and self-reliant, a stickball player who nurtured ambitions to see the world. But her first chance did not come until she headed to Alaska.

While in Fairbanks, she worked for the Bureau of Land Management as a draftswoman and took some mining classes at the University of Alaska.

When she met Mr. Flores, she recalled in The Saturday Evening Post, he told her, “If you don’t trust me, don’t go with me.”

She trusted him, unaware that he was not trained to fly over dangerous territory in the Yukon winter.

Ms. Klaben and Mr. Flores crashed in terrain that was waist-deep in snow, with temperatures as numbing as 48 degrees below zero. Without wilderness survival training, Mr. Flores adapted nonetheless. He wrapped Ms. Klaben’s injured foot in her sweaters, covered the openings of the cabin with tarpaulins and tried, without success, to fix their radio to send out a distress signal and build rabbit traps.

What little food Ms. Klaben and Mr. Flores had brought on board — a few cans of sardines, tuna fish, fruit salad and a box of Saltine crackers — was rationed and gone within 10 days. They drank water, some of it filtered through shreds of one of her dresses and boiled in an empty oil can. They ate bits of toothpaste that they squeezed from a half-filled tube — and virtually nothing else, they said.

“We’d pretend the melted snow was soup,” she told The Associated Press shortly after their rescue. “Some days it would be tomato, then beef, then all the other varieties.”

To pass the time, they read books, including a book of poems by Robert Service and a Bible. At times, Mr. Flores tired to convert Ms. Klaben from Judaism to his Mormon faith.

In early March, Mr. Flores left her for eight days — walking the treacherous ridge in snowshoes he had made of tree branches and wire — to find a clearing in the dense woods where they might be better seen from the air by bush pilots. He returned after finding a knoll about three-quarters of a mile away, and on Day 42 they set off for the spot, dragging a makeshift sled with their belongings.

A few days later, he left her again and found a frozen pond on which he etched an enormous SOS sign, with an arrow that pointed to their campsite, hoping it would be seen from the air.

A memorial to those who lost their lives in 2018

A pilot flying supplies on March 24 to a nearby trappers’ cabin spotted the “SOS” and soon saw Ms. Klaben at the campsite and Mr. Flores waving his arms and signaling with a mirror. They were rescued separately. Ms. Klaben was carried three miles to safety the next day on the back of Charles Hamilton, the pilot who had spotted her.

Her broken arm had healed by the time she was rescued, but she was treated for, among other things, malnutrition and frostbite at a hospital in Whitehorse. She was also besieged by reporters for newspapers and magazines, like Life, which published a cover story about the crash.

When she returned to New York City less than a week after being rescued, the toes of her frostbitten right foot were amputated. She soon began writing her book (with Beth Day), and shortly after its publication told her story on an episode of the game show “To Tell the Truth.”

She attended classes at Hunter College and Columbia University, promoted stocks at a brokerage and worked for a book publisher.

She met Robert Kahn, a securities analyst, through an early computer dating service, and they married in 1967.

Their wedding announcement in The New York Post read, “From Yukon to Mrs. Kahn.” Although they separated in the 1980s, the couple never divorced and remained friendly. Mr. Kahn, a founder of W. P. Stewart & Company, an asset management firm, died in 2009.

The appetite for adventure that she nourished as a child did not leave after the crash. Mrs. Kahn, as she became known, had no fear of flying and no nightmares and traveled widely with her family to Europe, Asia and the Caribbean.

“We’d travel with her from one European city to the next, meeting kids from other countries,” her son, Dr. Kahn, said in a telephone interview. “She was a global citizen, whether we were in fancy places or campsites.”

She also taught survival skills to the Girl Scouts, schools and other groups.

Besides Dr. Kahn, she is survived by another son, Rocky, and six grandchildren.

In 1975, she and Mr. Flores — they stayed friends until his death in 1997 — were advisers to “Hey, I’m Alive,” an ABC television movie based on her book starring Sally Struthers and Ed Asner.

“Those weeks gave me an opportunity to meet myself,” she told People magazine in an interview at the crash site before the film was broadcast. “Most people expect they would not be able to cope with a crisis and it was a great experience to find out that I could.”