A heartbreaking photograph of a chandelier taken by a 13-year-old boy as he lay on the floor receiving ‘life-saving interventions’ has won a picture competition for seriously ill children.

Touching images entered also show a line of photo’s hung up by a six-year-old boy after his sister who had complex health needs passed away, and the shoe soles of a 17-year-old girl who has trouble walking due to spastic diplegic cerebral palsy.

Ten were shortlisted in the competition, run by WellChild, and the top three will be sold in the WellChild Helping Hands Art Auction at Christie’s Auciton House, London, on Monday, to raise money for the charity.

The pictures were admired by the Duke and Duchess of Sussex when they attended the WellChild Awards at the Royal Lancaster Hotel in London, last Tuesday.

Explaining the winning photograph, entitled ‘resuscitation’, Jack Kirsopp’s mother, who lives in Doncaster, said it was taken when he was ‘on the floor having life-saving interventions’, and was the view of what he saw.

‘It looks like a star shining bright just like Jack and a beacon of hope. This can be seen as an inspiration to us during difficult times.

‘He has had three cardiac arrests in his short life so resuscitation is sadly something that is all too familiar for Jack.’ 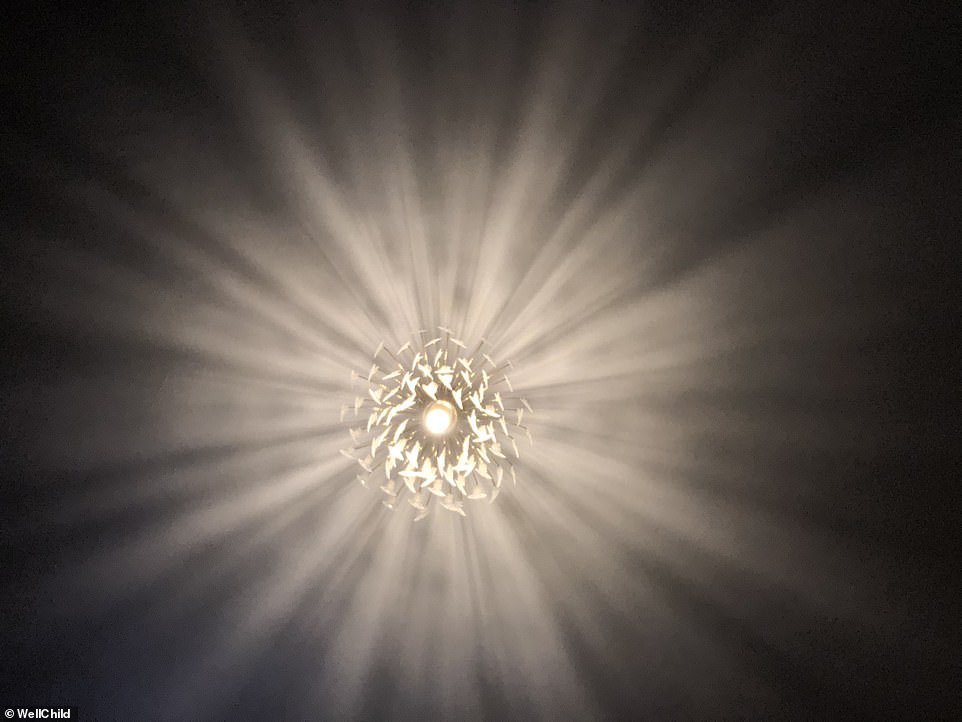 13-year-old Jack Kirsopp’s photo of the chandelier, taken while he received ‘life-saving’ interventions, achieved first place in the WellChild photography competition. He lives in Doncaster and has suffered three heart attacks

An image of photos hung up on the wall by six-year-old Ollie, from Leicester, to remember his sister who had complex health needs was also shortlisted.

‘She died in May,’ said his mother. ‘Ollie is trying to come to terms with where she has ‘gone’.’

‘He is working with a bereavement therapist and a suggestion was a washing line timeline showing before and after Lily’s death. this is the reality of his life at the moment.’ 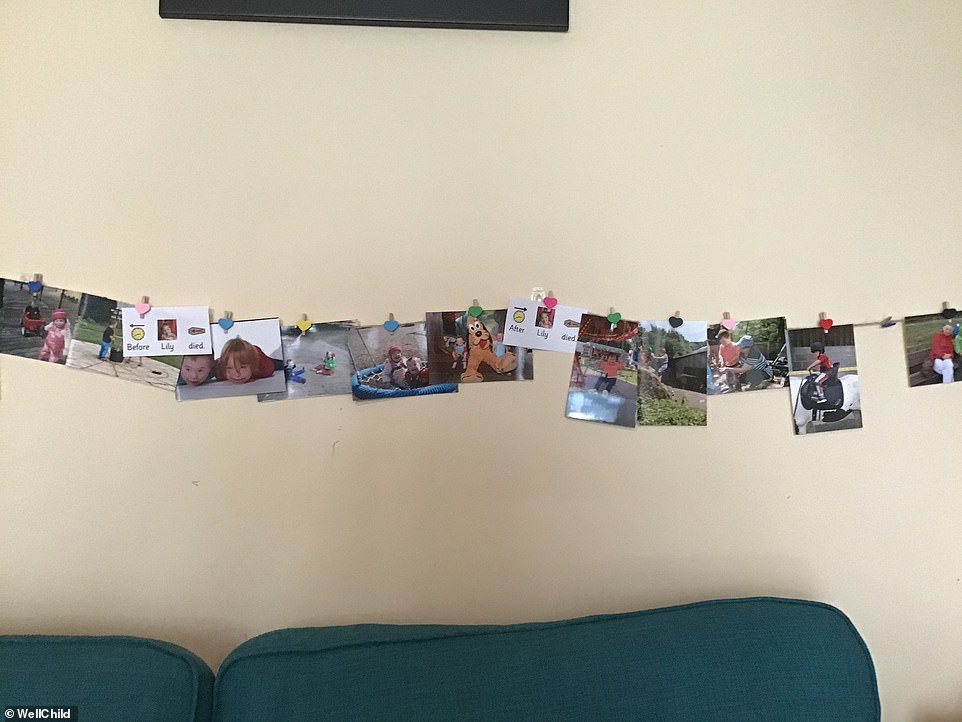 It was chosen by judges out of a shortlist of ten which included this washing line of pictures. It was taken by six-year-old Ollie, from Leicester, who is struggling to come to terms with his sister’s death in May. She had complex health needs

The winning image, by Jack Kirsopp, is up for auction at £750 alongside 11-year-old Samuel’s picture of himself in the hot tub to represent his lung condition, taken at home in Hampshire, and the picture by Curtis, 12, from Cornwall, representing how he communicates with others.

Speaking about his entry, Samuel said that when he first heard about the competition he and his mother talked about what they should do.

‘We spoke about my meds and physio and what happens if I don’t take them or don’t do my physio three times a day. I said it feels like my lungs have water on them, like If I swallowed a load of water and it went onto my lungs instead of into my tummy.

‘We then spoke about how we could show this in a picture which was really hard but after a while we came up with an underwater shot in the hot tub (which I liked as I got to play too).’

‘We grabbed my GoPro and off we went. I decided to do the peace sign and smile because being poorly isn’t sad. 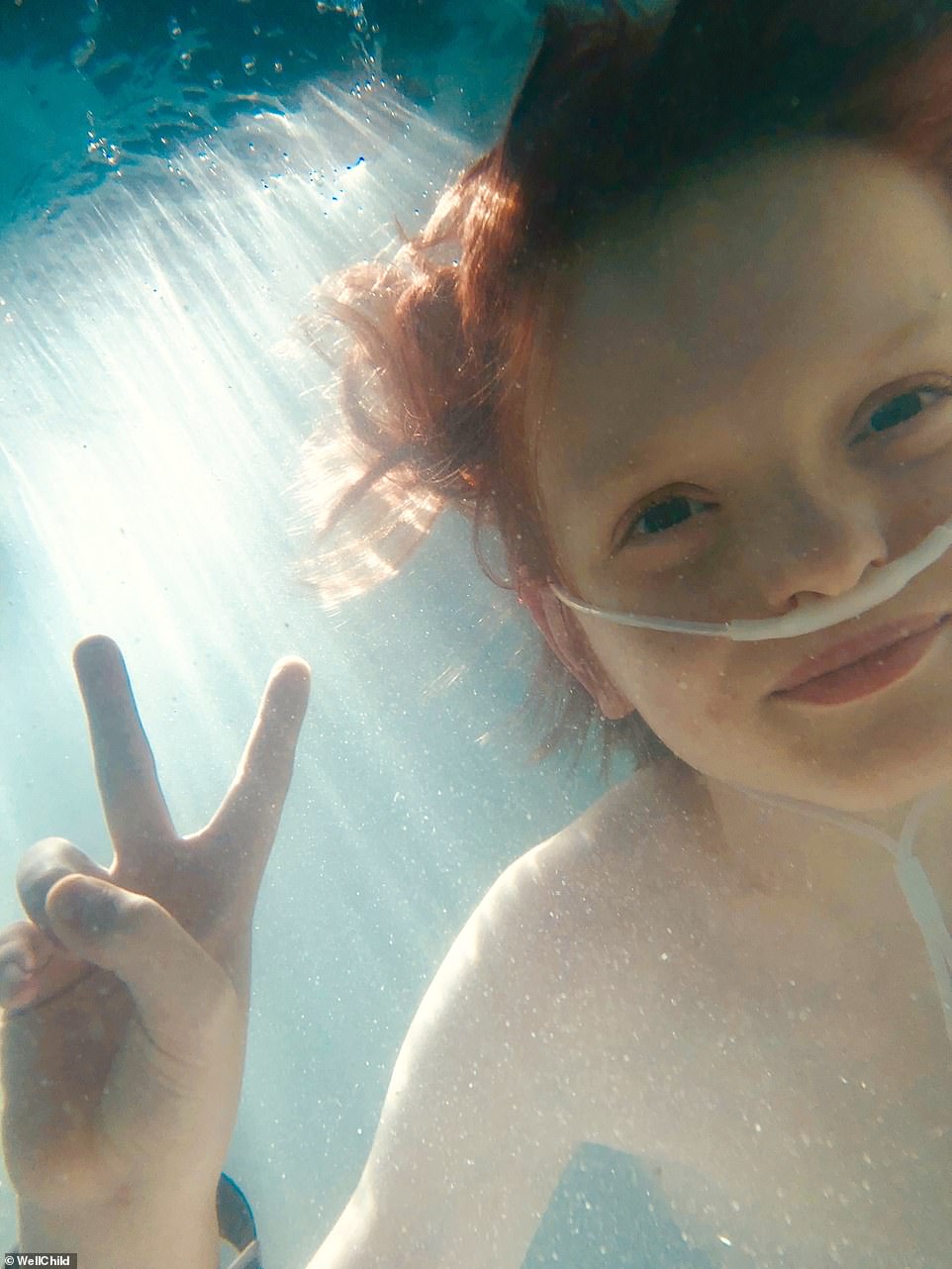 Samuel, 11, from Hampshire, who needs physio three times a day to help his lung problem took this photo to represent his condition. ‘It feels like my lungs have water on them,’ he said, ‘like if I swallowed a load of water and it went onto my lungs instead of into my tummy’.

INSOLES IN MY SHOES / STRUGGLES TO WALK

Another picture, showing the worn shoe soles of 17-year-old Angelique, who has spastic diplegic cerebral palsy, from Cheshire, was also in the top category.

‘I wear thick, heavy, shoes to help me walk and specially adapted insoles to support my feet and my balance. My toes get stiff and tense and I put lots of pressure on the insole, often making a hole in it,’ she said.

‘They get hot and uncomfortable. My shoe insoles represent the effort I put into life and the help and support I’m given by my family and the medical profession. I’m determined to succeed!

‘I go to a special school and have had a lot of operations of my feet and an SDR on my spine to help me walk and to alleviate my pain,’ she said.

‘I’ve done specialist physiotherapy since I was nine months old, attended Stick’n’Step for 16 years (a conductive education charity), to help me walk and be independent.’ 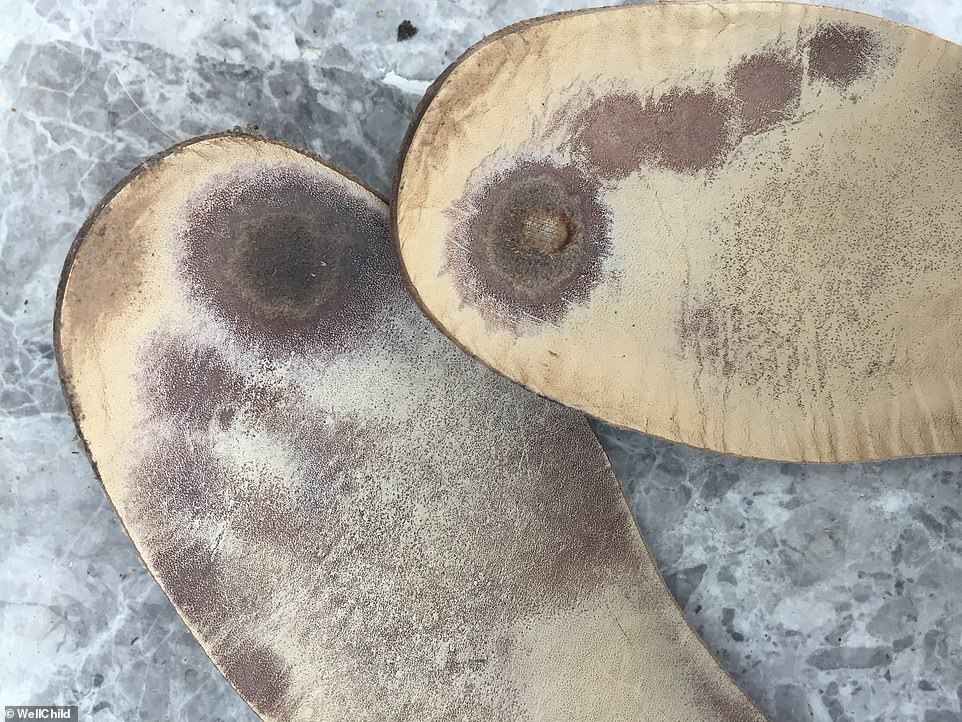 This picture of shoe soles was also shortlisted. It was taken by Angelique, 17, from Cheshire, who suffers from spastic diplegic cerebral palsy and has difficulty walking. ‘I wear thick, heavy shoes to help me walk and specially adapted insoles to support my feet’, she said

LISTEN WITH YOUR EYES, NOT JUST YOUR EARS

Curtis, 12, from Cornwall, who is deaf-blind and non-verbal, sent in a photograph of his hand and his eye.

His photo is captioned: ‘(My condition) does not mean I have nothing to say.

‘Slow down a little, take my hand and I will let you into my world. I talk with my hands not my mouth, show me your hands … let’s chat.’ 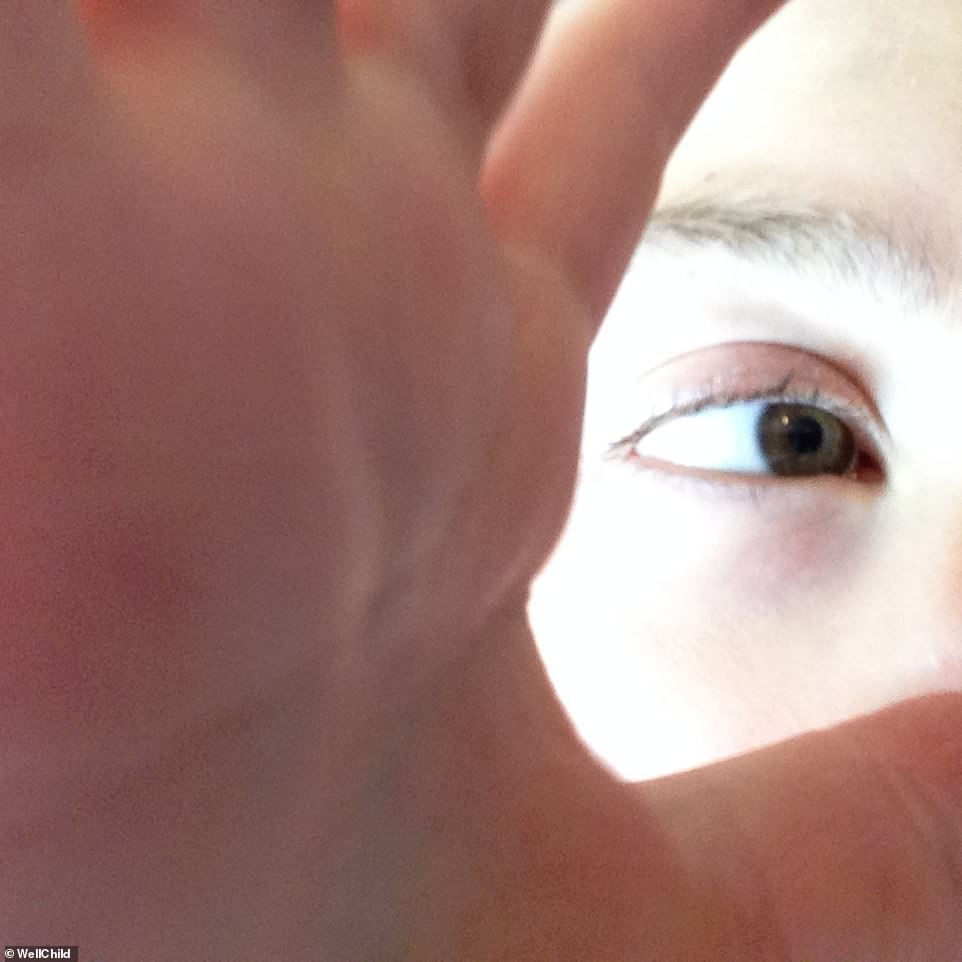 Curtis, 12, from Cornwall, who is deaf-blind and non-verbal, submitted this picture for the competition. He said: ‘I talk with my hands not my mouth, show me your hands… let’s chat’

Among other entrants that were shortlisted was Dakota, six, from Somerset, who sent in a picture of his  disabled older brother Ethan in a swing. 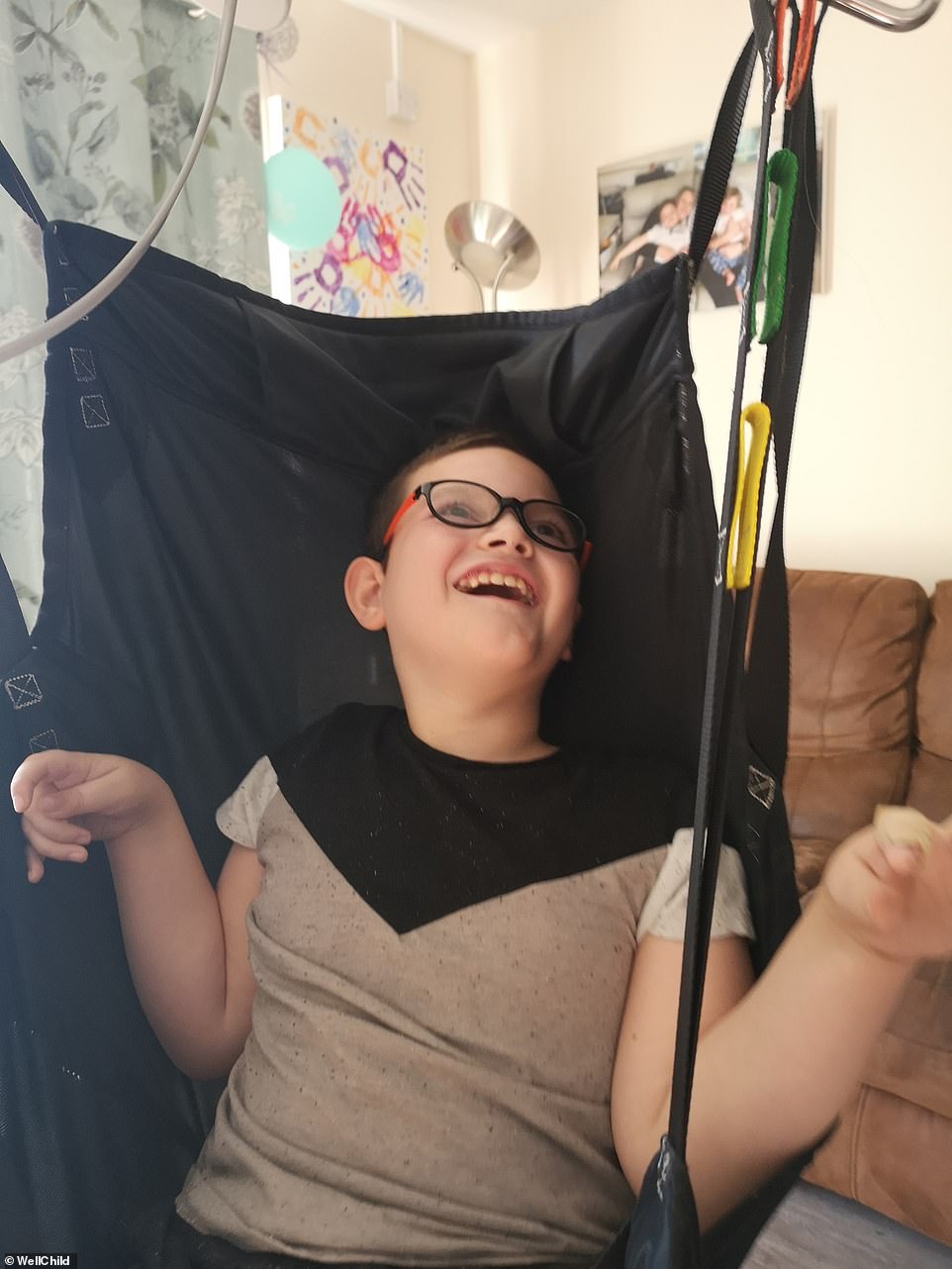 A heartwarming image of ‘super’ George, 9, from Prestatyn, north Wales, punching the sky at the coast also made the list.

‘Despite the greatest challenges George has never given up’, wrote the unnamed photographer. ‘He has been through so much and never ever moans and always tries his best’.

‘This photo represents the strength he has always shown throughout his life. I met a boy whose eyes showed me that the past, present and future were all the same thing.’ 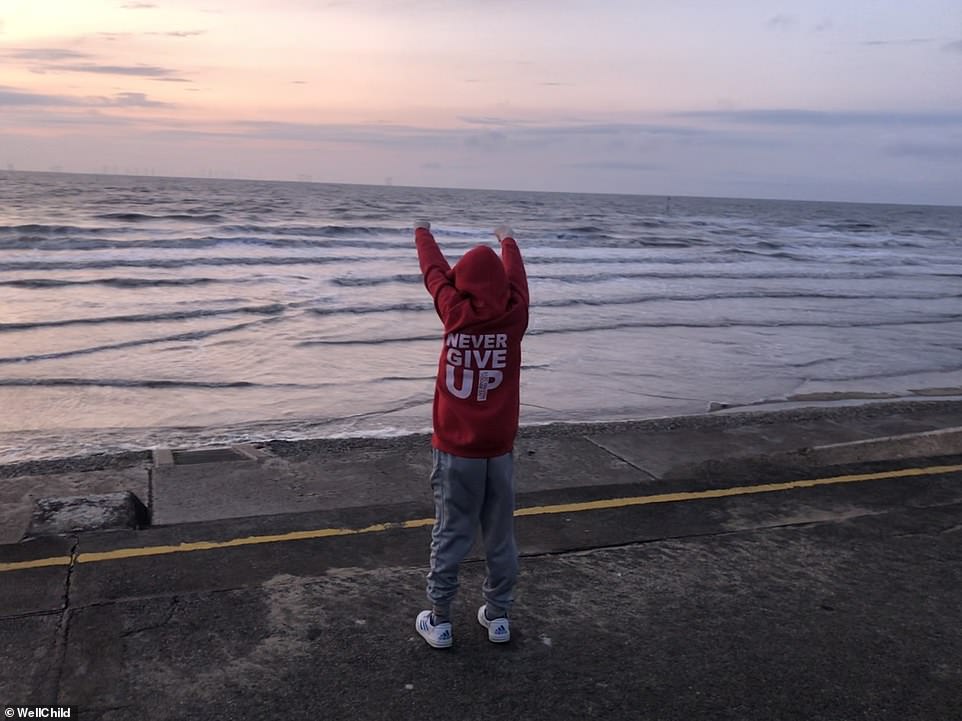 A photograph of ‘super’ George, 9, from Prestatyn, north Wales, also made the top ten. He was shown punching the air on the coastline. ‘Despite the greatest challenges George has never given up,’ said his submitter

20-year-old Myles, from Nottingham, who is wheelchair-bound, sent in a photo of a lion through railings.

‘As a young person with disabilities, I feel my life is a constant battle with ‘barriers’,’ he said. ‘These are not only the obvious physical barriers like the one you can see in my photograph; having to peep through the railings to see the animals because I can’t just get out of my wheelchair and stand up to see inside; but emotional and social barriers too.

‘Social isolation is a huge problem for young people with health needs. We are excluded from so many things, activities, parties and gatherings; just like the lonely lion in my photo, looking out at the rest of the beautiful, colourful and exciting world but not quite able to be part of it. This is so saddening and frustrating.

‘Can you imagine how it feels to have all your friends go out but you don’t even get invited as there are no drop kerbs, steps to get inside or accessible changing facilities?

‘Accessibility is something I’m extremely passionate about, I believe everywhere should be made wheelchair accessible. How is it fair that there’s so much beauty in our world, but only certain people can get to see it?’ 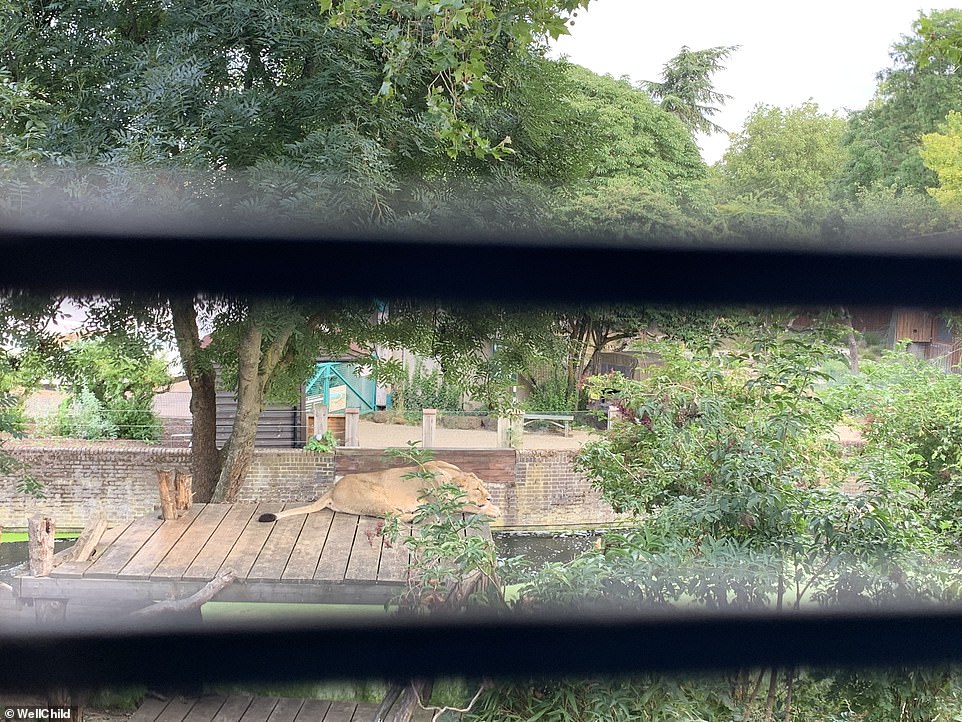 This picture of a solitary lion, taken through bars by Myles, 20, from Nottingham, who has to use a wheelchair, was also shortlisted. Myles said that social isolation, ‘like the lonely lion in the photo’, is a huge challenge for disabled young people

ME AND THE MINER

Noah, 8, from Huddersfield, who is disabled, sent in a photograph of him preparing to descend a pit at the National Coal Mining Museum.

His mother said: ‘Stepping out of the ‘cage’ down the pit after descending to 140metres, surrounded by coal and with just a head torch for light, I realised how far I had come as a parent who may potentially need to perform life saving action in these surroundings.

‘An ambulance would not be able to access us at all down there however I had all the emergency equipment and had been trained to the highest standard and I also had an excited son who wanted to do what all the other kids did, and so I felt confident to carry on and enjoy our day.’ 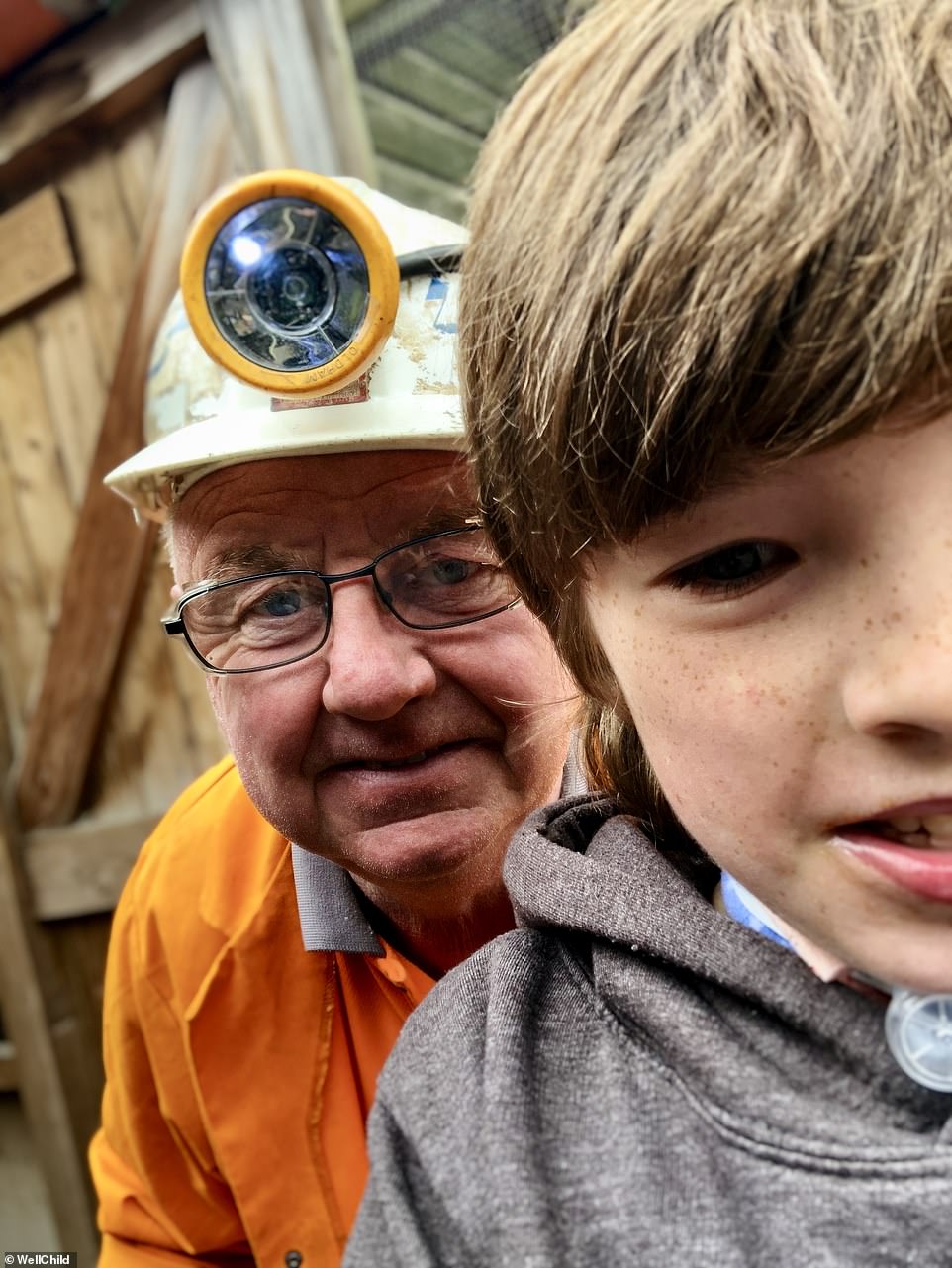 Noah, 8, from Huddersfield, sent in this image of him preparing to descend into a coalpit at the National Coal Mining Museum. His mother said that she went down with emergency equipment and medication so that she would be able to help her son if it was needed while they were exploring the mine

Dylan, 12, from Merseyside submitted a photo of a butterfly to represent the fact that everyone has potential for beauty.

‘I am 12 years old and have Cerebral Palsy, cortical blindness, global development delay, epilepsy and scoliosis to name a few of my conditions. But I am Dylan,’ he said.

‘Mummy helped me hold the camera and I pressed the button because butterflies grow in the darkness from a caterpillar into a beautiful butterfly.

‘When you have lots of friends with medical conditions the sad thing is unlike healthy children everyday life means my friends sometimes die, I also had a baby foster brother who was a poorly baby who died at a few months old. 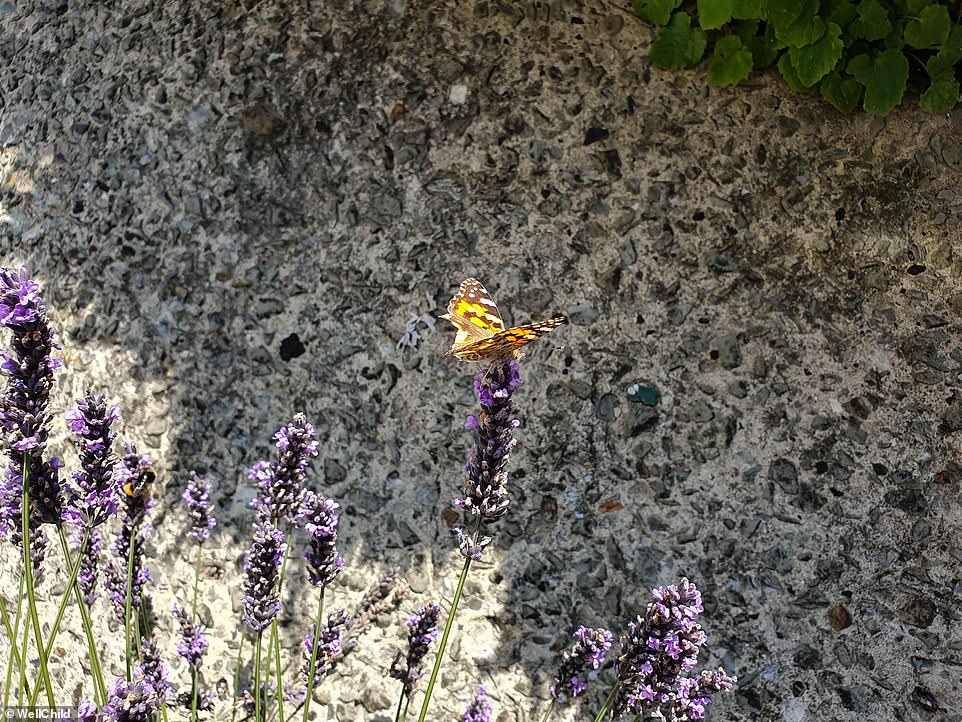 Dylan, 12, from Merseyside, sent in this picture of a Painted Lady butterfly on lavender. The youngster, who suffers from cerebral palsy, cortical blindness, development delay, epilepsy, and scoliosis said he chose this insect as it grows in the darkness from a caterpillar into a beautiful butterfly