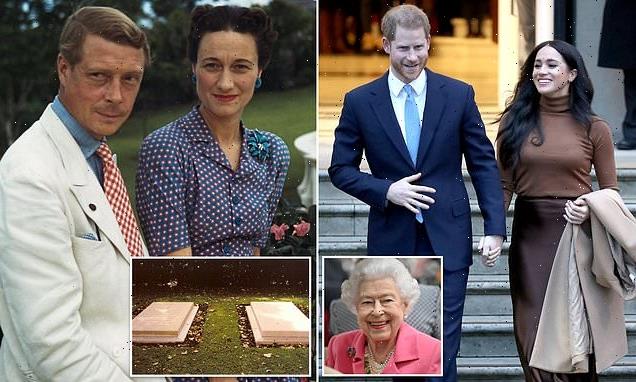 Prince Harry has suggested that his late grandmother the Queen took something of a final swipe at Edward VIII and his American socialite wife Wallis Simpson by ‘exiling’ them in the Royal Burial Ground and burying them ‘away from everyone else’ – 36 years after the former King ‘renounced the crown for love’.

Harry, 38, whose own exit from the royal family along with his Los Angeles-born wife Meghan Markle has been compared to Edward and Wallis’ experiences on a number of occasions, suggests in the opening pages of his explosive memoir Spare that his grandmother made the decision to bury the couple in a distant spot as a ‘last scolding’.

Recalling a moment when he found himself alone in the Royal Cemetery at Frogmore while waiting for a meeting with his brother William and his father Charles, Harry described the site as the ‘final resting place for so many of us including… the controversial Wallis Simpson. As well as her double controversial husband Edward, who was King and my great-great uncle.’

He continues: ‘After giving up the throne for Wallis and leaving Britain with her, the two began to worry about their eventual return and became obsessed with being buried [in the Royal Burial Ground]. 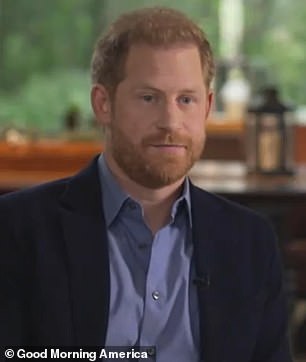 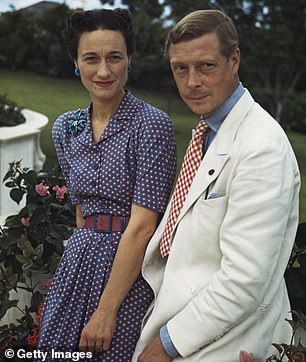 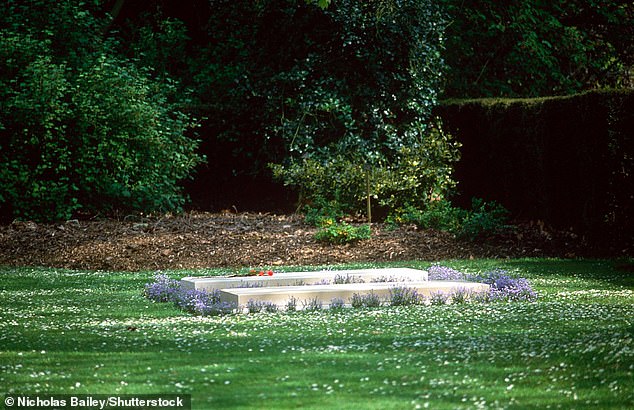 The 38-year-old Duke writes that his late grandmother agreed to bury Edward and Wallis in the Royal Burial Ground, but that they were ‘placed away from everyone else’ 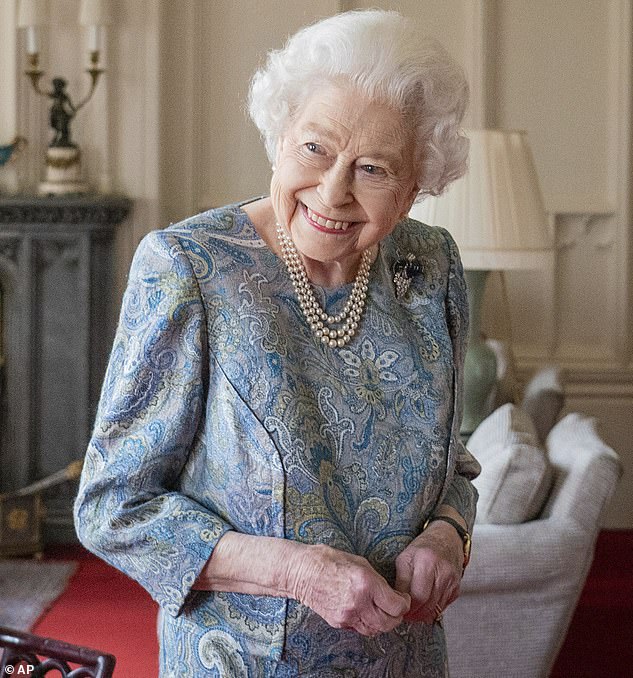 Harry then suggests this move was the Queen’s way of giving the couple ‘one last scolding, perhaps. A last exile, perhaps’

‘The Queen, my grandmother, agreed to their plea, but she placed them away from everyone else, under a sloping plane tree.’

Edward and Wallis: A scandal that rocked a nation

January 1931 – Wallis meets Prince Edward in January 1931, after being introduced via her friend Lady Furness

August 1934 – Wallis admits she and Edward are no longer just friends, after joining him on a cruise

January 1936 – King George V dies. Edward asks Wallis to watch the proclamation of his accession with him from St. James’s Palace

August 1936 – The pair enjoy a cruise around the Adriatic sea with friends. Details of their relationship appear in the American press

June 3, 1937 – The couple get married in the south of France. Wallis was formally known as the Duchess of Windsor, but was not allowed to share her husband’s title of ‘Royal Highness.’

Harry then suggests this move was the Queen’s way of giving the couple ‘one last scolding, perhaps. A last exile, perhaps’.

Edward VIII’s decision to abdicate the throne in December 1936 in order to marry American divorcee Wallis rocked the monarchy and the country to its core – sparking a controversy of epic proportions, that is now seen as an almost eerie foreshadowing of the scandal that erupted as a result of Megxit.

Harry stopped short of making a direct comparison between himself and Edward, Meghan and Wallis, however the similarities between the two couples – and the sensational fallouts from their royal exits – are clear for the reader to see.

Later on in Spare, Harry returns to the topic of Edward’s abdication and his relationship with Wallis, recounting the former King’s abdication as him ‘renouncing the Crown for love’.

Edward wed Wallis, who was thought unfit to be Queen, having been married twice, in Tours, France, one year after he ceased to be King.

After finding herself at the center of one of the most scandalous love affairs of the 20th century, Wallis faced harsh criticism and received abusive and hostile hate mail.

In 1937, she and Edward went to Germany to meet Hitler, before the atrocities of the Second World War, with her husband keen for her to experience the pomp and ceremony of a royal tour, denied to Wallis in England.

Edward become governor of The Bahamas between 1940 and 1945, and the couple lived out the rest of their days enjoying the life of high society figures.

When Edward died in 1972, Wallis became something of a recluse and was rarely seen in public before her death in 1986, at the age of 89.

She was buried alongside her husband at the Royal Burial Ground at Frogmore House. 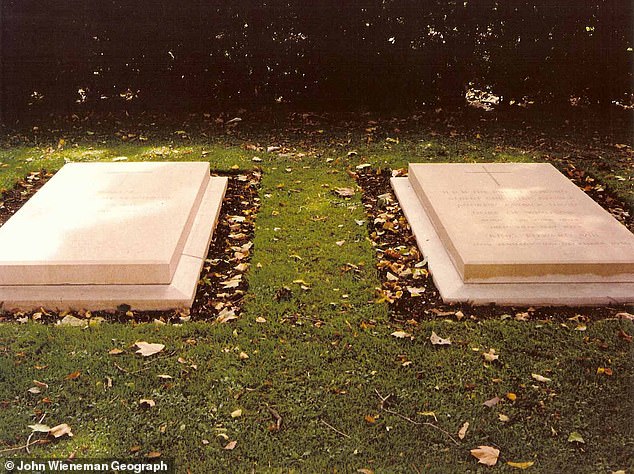 According to Harry, Wallis and Edward ‘became obsessed with being buried [in the Royal Burial Ground]’ after they moved overseas 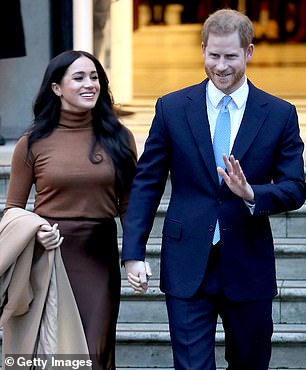 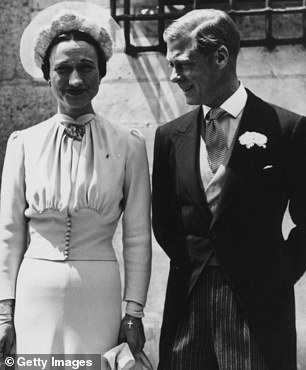 The Duke of Sussex stops short of drawing direct comparisons between himself and Meghan and Edward and Wallis, however there are numerous similarities between the couples

Frogmore Cottage, one of the properties in the grounds of the estate, is where Prince Harry and Meghan lived before they moved to California last year.

Numerous parallels can be drawn between Edward and Wallis and Harry and Meghan; both couples lived overseas following their exits from the royal family – the former in France, while the Sussexes now reside in California – and both gave televised interviews after quitting the Monarchy. 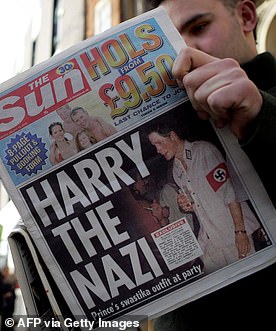 Edward and Wallis stunned the world when they spoke out about their experiences to the BBC in a tell-all sit-down in 1970 – more than 50 years before Harry and Meghan sparked similar scandal with their explosive Oprah interview in March 2021.

However, Harry does not address these comparisons head-on in Spare, instead choosing to make just a handful of references to Edward and Wallis – although many readers will no doubt draw the parallels themselves with little difficulty.

Elsewhere in the book, the Duke of Sussex is much more direct and to the point, making a series of explosive claims and allegations about his family members – including accusing his brother William of physically attacking him during an altercation in the grounds of Kensington Palace in 2019.

Harry claims that his brother – whom he refers to at one point as his ‘arch-nemesis’ – branded Meghan ‘rude’, ‘difficult’, and ‘abrasive’ during an argument, which the Duke of Sussex says ended in William throwing him to the floor.

He also blames William and Kate for his notorious decision to wear a Nazi uniform to a costume party in 2005, alleging that the Prince and Princess of Wales encouraged him to sport the controversial attire when he asked them for their opinion.

Spare was due to be released officially on January 10, however several extracts from the book were released early – with both the Guardian and Page Six publishing excerpts late on Wednesday night.

It was then revealed that the memoir had accidentally gone on sale early in Spain – resulting in multiple leaks.

The Spanish version, entitled En La Sombra, which translates as ‘In the Shadow’, reveals that Harry has dedicated his memoir ‘Para Meg, Archie y Lili… y, for supuesto, mi madre’ – ‘For Meg, Archie and Lili… and, of course, my mother’.

Prince Harry ‘begged Prince Charles not to marry Camilla’ and feared she would one day be his ‘wicked stepmother’, his new book claims

‘Wonderful! Now you’ve given me an heir and a spare’: Charles told Diana ‘my work is done’ on the day of Prince Harry’s birth, claims the Duke in leaked extract of bombshell memoir ‘Spare’

Prince Harry brands Prince William his ‘ARCH-NEMESIS’ in explosive memoir, as he admits he has ‘always been in competition’ with his ‘beloved brother’11602359 because of his role as the ‘spare’