Well done, ladies
I applaud the women who were brave enough to appear on Ladies Night (Seven, 29/9) to highlight a very real threat to our society. I have been touched by breast cancer, having lost my wife to the disease some 14 years ago. On today's news I heard a report that recently the cases of the disease have increased from one in eight, to one in seven. These are disturbing facts. In light of these statistics, I think it is time for the government to allow women access to free breast scans earlier. The sooner any issues are identified, the greater the chance of survival. Once again, thanks to those women who were brave enough to bring this issue to national attention by exposing themselves.
Andrew Connell, Newtown 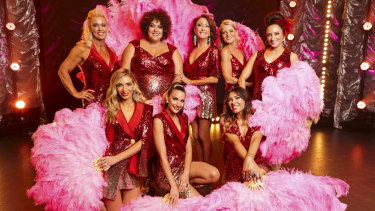 Famous Australian females stripped off for a good cause on Seven’s The All New Monty: Ladies Night. Credit:Seven

Mojo? More like no-no
Isn't there something ironic (and slightly worrying) about the ABC sponsoring and presenting an accolade to advertising? Itself an ad, How Australia Got Its Mojo laid the hyperbole on with a trowel, fawned over the stereotypical "ocker", presumed a white homogeneous "we" that doesn't exist and totally over-egged the "how good is advertising" pudding.
John Laurie, Newport

Where's the fresh stuff?
Shame on you, Australia, if you missed Nine's The Block last week. How thoughtful of the station to re-run it for you, what, 17 times, was it? It certainly seemed like it. Imagine how much Nine saved though. No new programs to buy; just regurgitate, ad nauseam. Still, those who loved it the first time around must have been thrilled to be able to recite all the dialogue by the time they'd seen all the … um, we don't say "repeats" do we? Ah, "encores". Clever. And it's not just Channel Nine. Does anyone remember those promos a few years ago, telling us what a vast range of new programs we'd get on all our free-to-air channels? What a crock.
David Allen, Bayswater North

Two sides to every story
What are the taxpayers getting for our funding of the ABC? Barrie Cassidy is looking ultra-conservative compared to what Fran Kelly is dishing up on Insiders. Week after week she delights in negative comments, cutting off any positive comment and promoting the opposition at every opportunity. When is the ABC going to be called to account? Fifty per cent of viewers are not of the left persuasion and are not interested in the ridicule of world leaders to the delight of an obviously stacked panel of commentators every week on Insiders.
Pam Swirski, Berwick

We came here for the music
Like Brian Morley (Letters, 3/10), I also abhor Martin Buzacott on the ABC repeating his promos primarily as a segue to promoting himself, using the program details as his "foot in the door". Many other announcers are self-promoters likewise. ABC FM used to be a high-quality broadcaster of good music. Alas, no more!
David Halprin, Balwyn North

Make way for Simon Reeve
I have been reading letters regarding The Chase Australia with interest. I watch only the inimitable Bradley Walsh on the UK Chase as I much prefer him to Andrew O'Keefe. Andrew did such a great job on Deal or No Deal but is not half as impressive on The Chase. Why not ask the veteran Simon Reeve (formerly on Million Dollar Minute) to take over, eh?
D. Peiris, Moonee Ponds

A real turn-off, literally
The latest ABC Classic jingle, "Life is better with music", is a real turn-off. If I wanted to listen to commercial radio, I'd change the station. Classical music needs no embellishment so please, presenters, just get on with playing the great works of the genre and let listeners enjoy them without irritating slogans.
Helen Scheller, Benalla

High praise for The Project
The Project on Network Ten just keeps getting better and has become my guilty pleasure. Good News Sundays, smart segments that allow the panel to discuss any topic with facts, and great humour … I only hope Carrie Bickmore or Waleed Aly aren't poached by other networks and it sadly becomes a mediocre show with banal celebrities. I have a great recommendation: why not get Jon Faine as the loveable uncle on every Friday to replace the grumpy and annoying Steve Price?
Jenny Smith, East Melbourne

Standing up for Martin
Martin Buzacott is never a bore. One looks forward to hearing his cheerful voice and well-researched program on ABC Classic. I have never noticed the habit Brian Morley complains of in his letter (3/10).
Gloria Fleming, Oakleigh

A goodbye and a hello
Bon voyage and safe journey, Jon Faine. And if it's into politics you go, do it quickly, I don't want to be too old to still have my marbles! And a really hearty welcome to the wonderful Virginia Trioli. We'll be in good and safe hands – again!
Myra Fisher, Brighton East