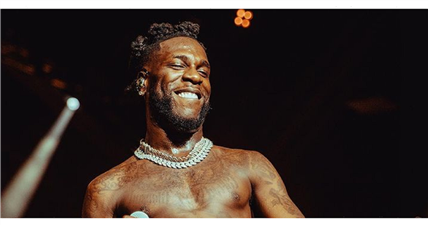 The Grammy winning Nigerian Singer and Rapper Burna Boy gives a tour of a Mansion that he helped create and design. It situated in the creative and commercial capital of Nigeria, Lagos. It was in early 2020 when he finally decided to move in to his seven bedroom mansion. The architect of the mansion, Akose Enebeli, has made sure the singer can be himself in the mansion as he customized the construction of the house to the liking and personality of Burna Boy.

The Genius Behind The Mansion’s Aesthetic

The architect of the mansion, Akose Enebeli, recalls how he was commissioned to build the mansion. It was in 2017, while he was in the middle of constructing a 10 bedroom mansion for the former Manchester United striker, Jude Ighalo, when he received a call from an unfamiliar number. The person on the other line was Burna’s manager and mother, Bose Ogulu who happen to see the under construction mansion of Ighalo and was impressed by the talent of Enebeli.

Without giving much details, Enebeli said that both Burna and his mother were extremely impressed with his capabilities upon showing them his initial blueprints for the artist’s mansion. Enebeli remembers that all Burna could say during the initial planning was ‘wow’. The architect shares that it was fun working with Burna and that he enjoys turning empty spaces into a stunning residence for his clients.

The Historic Mansion Of Burna Boy

Burna Boy has revealed that the Grammy winning album, Twice as Tall, was made in his Lagos Mansion. The mansion sits on a 13,000 sq ft oasis and has a colossal construction that features serene façade with colors beige and gray in it. It boasts hallmarks of the contemporary luxury living with high ceilings and tall windows with entertainment rooms such as game room, private cinema and lounges. Guests can come and go since it has a garage that can house plenty of cars.

The rooms on the mansion is free flowing area on the ground floor, the main living room leads to a huge window with overlooking view of the tended outside garden. The house has the serene views of the lagoons, creeks and greenery of the Port Harcourt region, which is only 384 miles far from the Nigeria Rivers State where the artist was born. Burna Boy enjoys this the most as he hears water sounds from the river which gives him calmness.

Born as Damini Ebunoluwa Ogulu on July 2, 1991 to a welding company manager father and a translator mother. The Nigerian singer and rapper is considered to be the most successful and biggest African artists. His claim to fame is his single Like to Party which was released n 2012, which was then included into the Debut Studio Album L.I.F.E released in 2013. Just four years after his debut album, he was signed by Bad Habit / Atlantic Records in the United States and was set to debut internationally through Warner Music Group. Burna Boy’s third studio album, Outside, was considered to be his major label debut. He first won international awards in 2019 as Best International Act at the yearly BET Awards and was given the Apple Music Up Next Artist award on the same year. He was first nominated at the 62nd Annual Grammy Awards was for his fourth album, African Giant released in July 2019, which also won the Album of the Year at 2019 All Africa Music Awards.

Soon after the numerous recognition he received, he won African Artist of the year at the 2020 Vodafone Ghana Music Awards (VGMA). Burna Boy released his fifth studio album on August 14, 2020, Twice as Tall which was produced by Diddy and his mother and manager, Burna Bose Ogulu. The album has become the highest charting album in his career which debuts at No. 1 on the Billboard World Chart. He received another Grammy Nomination in 2020 at the 63rd Annual Grammy Awards for the same category for his album Twice as Tall. This nomination has made him the first ever Nigerian artist with back to back nominations at the Grammys which he eventually won.

As of this writing, Burna Boy has a net worth of $17 Million Dollars following his success of his albums and numerous nominations and awards including his Grammy Award. This made him stand out among other Nigerian singer which makes him the most successful Nigerian Artist worldwide.

NEXT: Billie Eilish’s Journey To Being A Grammy Winner & Multi-Millionaire