Remarkable history of Madagascar’s monarchy found in a Surrey attic: Mementoes revealing the life of Queen Ranavalona III who was widowed at 22, exiled to Algiers and became a fashion icon sell for £43,000

A box of forgotten mementoes unearthed in an attic in Surrey has shone a light on the final days of the monarchy of Madagascar more than 130 years ago, and the remarkable life of its young Queen.

Family photos of Queen Ranavalona III, who died in 1917, after being exiled to Réunion Island in 1886 following Madagascar’s invasion by the French, and a dress belonging to her aunt and political advisor, Princess Ramisindrazana of Madagascar, fetched £43,000 at auction this week.

These treasures were kept by a member of Ranavalona and Ramisindrazana’s staff, Irish-born Clara Herbert, who stayed with them until their respective deaths in 1917 and 1923, and were recently unearthed by one of her descendants in Reading.

Auctioneer Kerry Taylor said in a video explaining the story behind the dress, that she was contacted by a descendant of Herbert who had found a box of mementos, along with the dress, while he was moving house.

They shed light on the life of Queen Ranavalona III who became Queen and was widowed at 22 when the Prime Minister poisoned her husband so he could marry her. 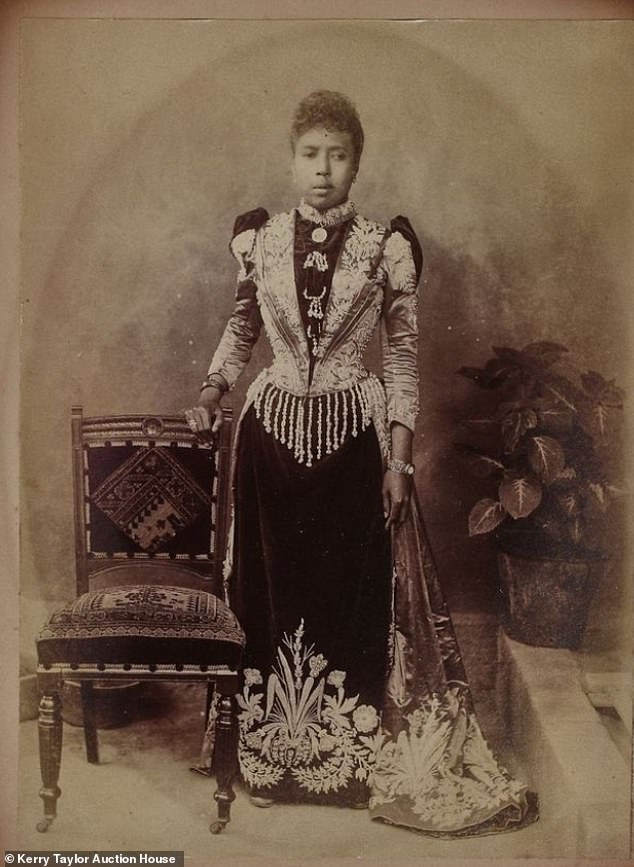 Princess Ramisindrazana was the aunt of the Queen and was disliked by the French for inciting rebellion against them on Madagascar before the family were exiled. It is her dress, made on the island, which was auctioned 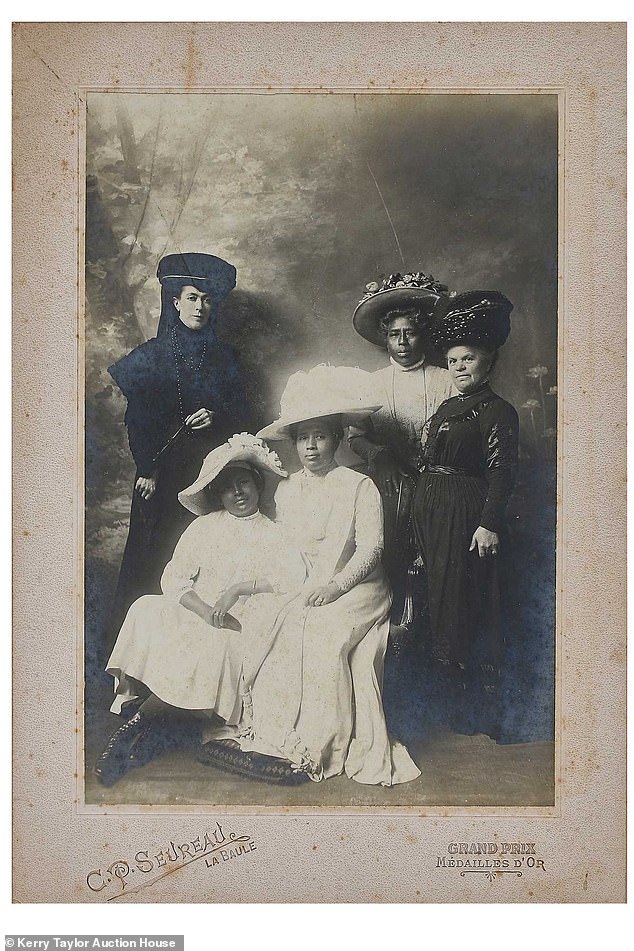 A dress auctioned today shines alight on the last sovereign of Madagascar, Queen Ranavalona III, who was overthrown by the French colonial forces in 1886 and sent into exile in the Reunion and then Algiers. Pictured from the left, Miss Clara Herbert, sitting, Marie-Louise, the heir apparent to Queen Ranavalona, sitting centre, second right, Princess Ramisindrazana and far right, an unnamed companion

The gown, which was the lot’s piece-de-résistance, was a silky dark purple number made of velvet and cyclamen pink satin, which was most likely made for the royal during her Malagasy days.

The entirety of the lot will be transported to Madagascar and will be exhibited at the Queen’s Palace, which was refurbished and reopened to the public recently.

Andry Rajoelina, Madagascar’s president, said the dress and documents will be exhibited alongside Ranavalona III’s crown, which was recently handed back to the island by the French government.

Miss Herbert, who hailed from Muckross House in County Kerry, had answered a newspaper advert looking for a companion for the women of the Malagasy royal family. 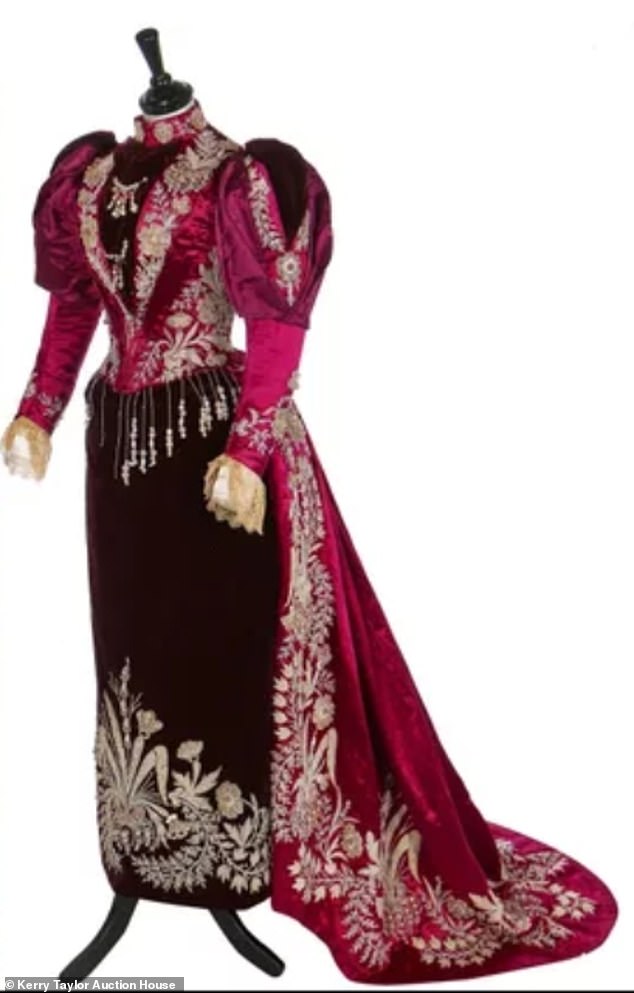 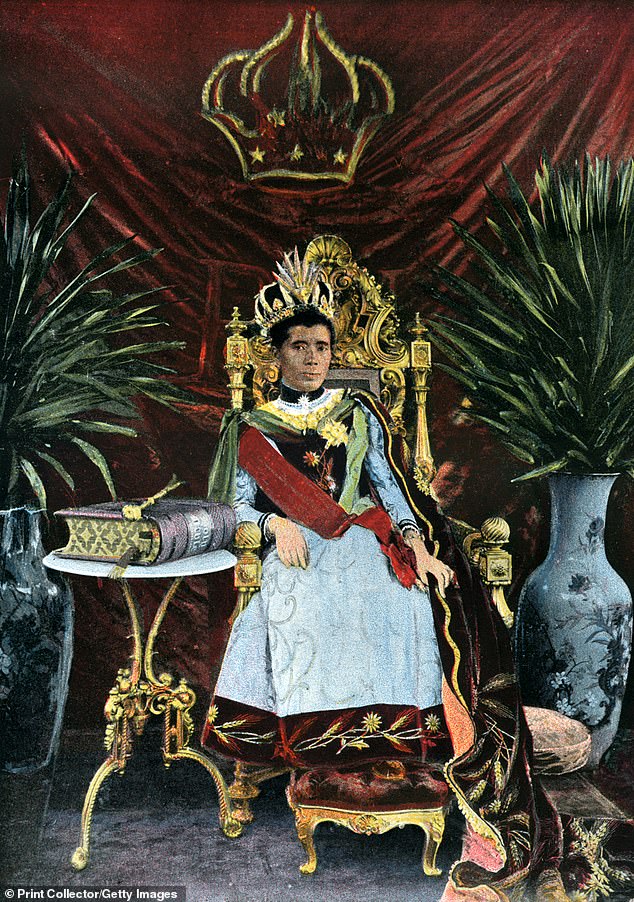 Queen Ranavalona became the reigning Monarch in 1883. In 1885, two years into her reign, the French overtook Madagascar. They kept her as a puppet monarch for less than two years before deciding to send her away on the Reunion island

‘She was of genteel birth, but they didn’t have a lot of money, she was a brilliant linguist, she spoke may languages,’ Taylor said.

In the 1880s, Miss Herbert travelled to Madagascar where Queen Ranavalona III was in the first year of her reign, which was threatened by the French efforts to invade the island.

Ranavalona III was raised as a protestant and taught by instructors from the London Missionary Society. Upon finishing her education she married a nobleman.

But her husband died, leaving her a widow at 22, and just two months later Queen Ranaavalona II also passed away, leaving the young Ranavalona to ascend the throne.

She was also forced to marry the much older Prime Minister Rainilaiarivony, who had also been wed to the two previous Queens, and was rumoured to have poisoned the young Queen’s husband so that he could make her his bride.

Kerry told the Guardian: ‘This poor girl had to marry this horrible old man. She was told she just needed to do needlework and look nice.’

While her role was largely ceremonial, she did try to stave off colonisation by trying to improve diplomatic relations with foreign countries, sending gifts to the US President Grover Cleveland in 1886, including silk cloths, an ivory pin and a woven basket. 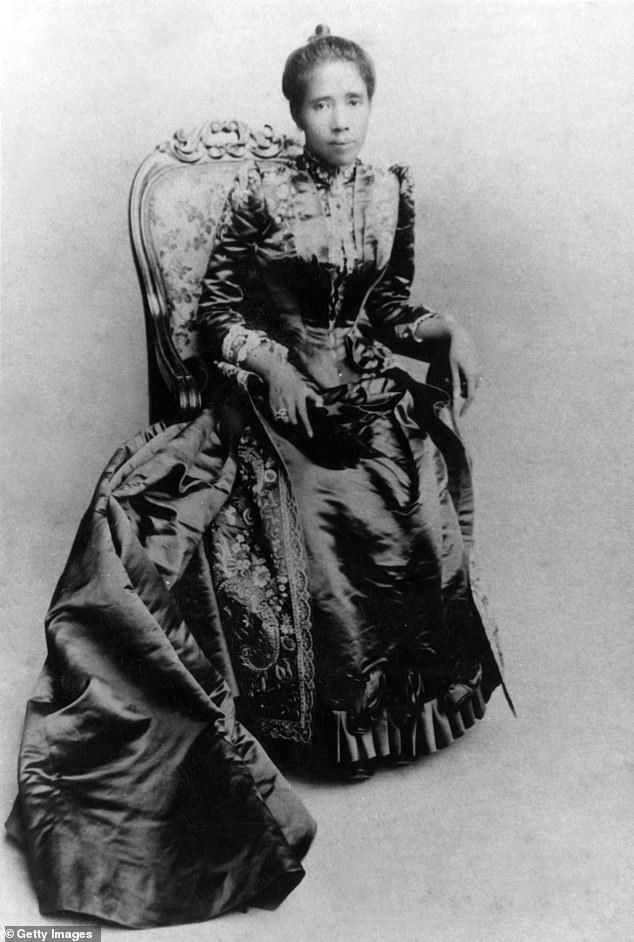 Ranavalona called herself a ‘heart-broken’ woman two years into her exile, when the French sent her from Reunion to Algiers 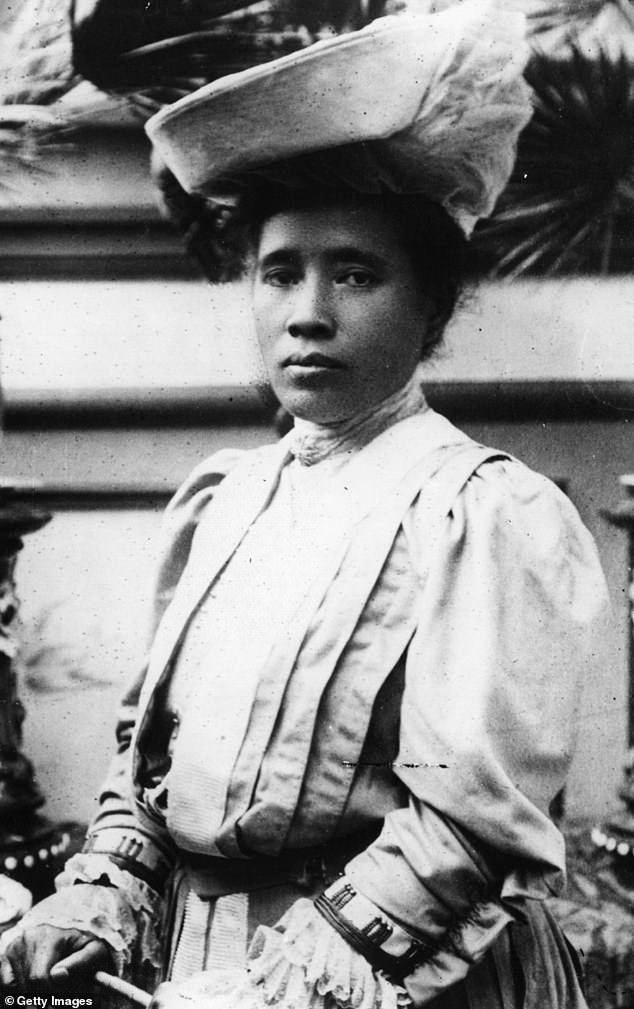 Auctioneer Kerry Taylor said all the members of the Malagasy royal family looked ‘miserable’ during their exile in the Reunion (pictured, Queen Ranavalona III during the exile) 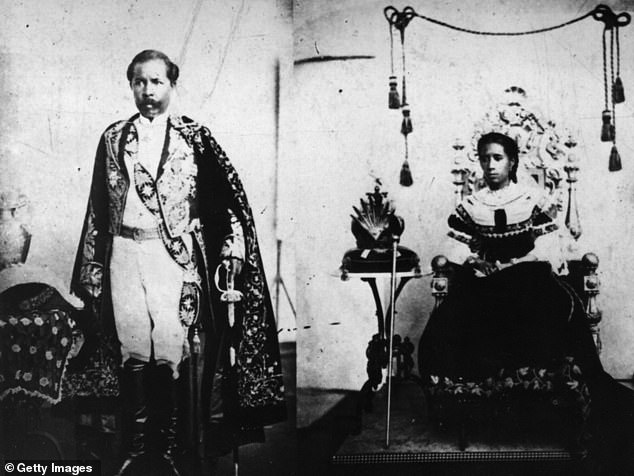 Ranavalona holding court next to her husband, the Prime Minister Ranilaiarvony, who was suspected of having her first husband killed so he could force her into a political marriage

When the French were finally successful in taking control of Madagascar in 1885, they decided to keep Ranavalona as a ‘puppet monarch.

But her aunt Ramisindrazana helped to incite rebellion against the French, and in 1886, the family was sent into exile.

‘The women were woken up at half past one in the morning, and they were taken to the coast and put on a ship,’ Taylor said, adding that they reluctantly let the rebel Ramisindrazana go.

‘They really would have quite liked to have executed her, as they did with many of her male co-conspirators. But because she was lady, she was put on the ship as well,’ Taylor said. 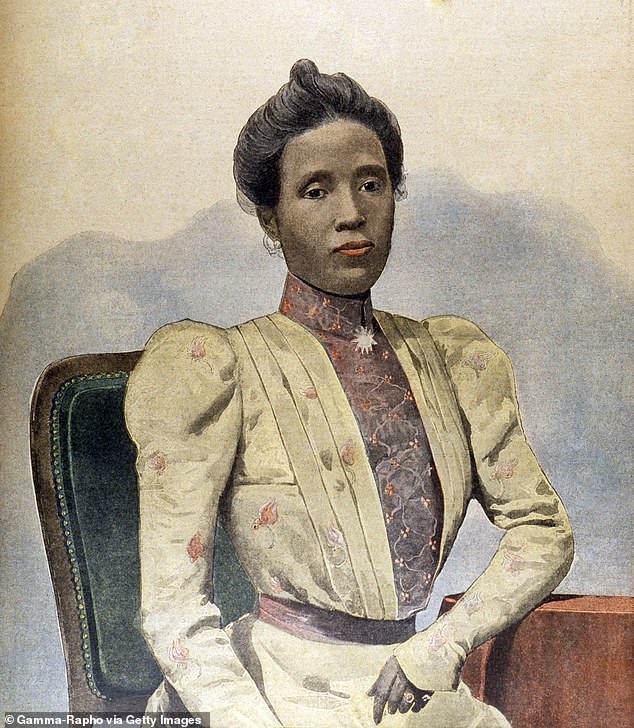 A portrait for Ranavalona during a visit to France in 1901, where she was treated like a celebrity due to her beauty and beautiful gowns

After staying in Reunion for two years, the family were moved to Algiers.

Ranavalona III was  the last sovereign of Madagascar, reigning from 1883 to 1886.

Its first known monarch was Andriamanelo, who reigned from 1540 to 1575.

All reigning monarchs were said to be members of royalty who were hereditary descendants of Andriamanelo.

Madagascar functioned on a cast-based system where the Andriana – the nobility – were the most elitist and privileged class.

In 1863, following an Aristocratic Revolution, the monarchy went from absolute to limited when King Ramada was strangled on the order of the Prime Minister Rainivoninahitriniony.

After this, Prime Minister Rainilaiarivony, who took power in 1864 (and was Rainivoninahitriniony’s brother) wedded King Ramada’s first widow, Rasoherina, and his second wife Ranavalona II before eventually marrying Ranavalona III.

The Monarchist system fell in 1895 when the French colonialist forces took over Madagascar.

They kept Queen Ranavalona as a puppet monarch, but soon exiled her when she and entourage became suspected of inciting rebellion against the French.

The news was hard to swallow for Ranavalona, who is said to have burst into tears and cried:’ Who is certain of tomorrow? Only yesterday I was a Queen. Today I am simply an unhappy, broken-hearted woman.’

However, Taylor went on to say the Malagasy royals enjoyed happier times in Algiers, where they were treated like minor celebrities and would enjoy a diverse and active social life.

‘From 1900 onwards, we see Ranavalona and Ramisindrazana looking fabulous in the best fashions with extraordinary hats and feather boas,’ she said.

In 1901, the French government allowed the royals to come France, where they charmed the French with their beauty and sense of style.

‘Wherever they went they were followed and they were photographed,’ Taylor said.

‘The French people took them to heart and basically petitioned the colonialist authorities to give Ranavalona a bit more money so she could go shopping a bit more in Paris and other places.’

While Ranavalona III was never allowed to return to the island when she was alive, her body was returned to her home country after her death.

Taylor went on to say the lot auctioned yesterday contained pictures of the royal family during their stay in Madagascar, where they all looked ‘miserable.’

The auctioneer said the women of the Malagasy royal family were ‘very fashionable,’ with Ranavalona III sporting lavish gowns from French designers.

However, the dress put on auction, she said, belonged to her ‘extremely influential aunt,’ and was most likely made in Madagascar.

‘The colonsr are not typical of a Paris fashion house,’ she said.

‘And the beading and embroidery although lavish,, isn’t really haute couture standard for that time,’ she added.

‘It’s a cotton velvet, rather than a silk velvet, which makes me feel that this something that in Madagascar they’d be able to get their hands on more easily,’ she added.