The ‘90s were truly a golden era for gimmicky snack foods, and none — or very few, at any rate — were more beloved than Dunkaroos. It was a sad day when the vanished from shelves… but now, a spiritual successor has arisen: Go-Gurt Dunkers are basically Dunkaroos, just with yogurt instead of frosting. And even more importantly, they are readily available. You can get them right now. Be still, my nostalgia-loving heart.

It’s not entirely clear exactly when Go-Gurt Dunkers first arrived, but they do appear to be quite recent; they’ve only started appearing on social media courtesy of several food Instagrammers over the past week and a half or so. Additionally, the Impulsive Buy showcased them in the site’s “Spotted On Shelves” feature on Dec. 11. Available in three flavors — Strawberry, Vanilla, and Cotton Candy — Dunkers consist of tubs of yogurt paired with handfuls of graham cracker-like cookies; the idea is that you dunk the cookies in the yogurt before you eat them. They’re available at a wide range of retailers, including Meijer and Target. Price-wise, they seem to run for anywhere between $2.99 to $4.39, depending on where you are. (Differing markets frequently result in the same items costing different amounts based on cost of living.) 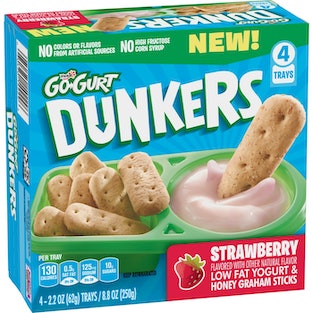 But although many of us have only just been made aware of these treats, rumors of their arrival have been circulating for several months. In a piece about trends in yogurt products aimed kids published at Berry On Dairy in August, food scientist Donna Berry noted that unnamed sources had told her that Go-Gurt Dunkers were in the works. At the time, Berry likened them to the recently released Stonyfield Organics Snack Packs, which feature a similarly Dunkaroos-esque gimmick. Clearly those rumors were accurate, because, well… here we are.

While the Stonyfield Snack Packs can feature either graham crackers or pretzels as their dunkable item, though, Go-Gurt Dunkers zero in on in the grahams. The Strawberry and Cotton Candy yogurts come with “Honey Graham Sticks,” while the Vanilla yogurt ups the ante with “Chocolate Graham Sticks.” I would argue that this particular detail aligns Dunkaroos more with Dunkers than with Snack Packs; Dunkaroos were typically all grahams, all the time. 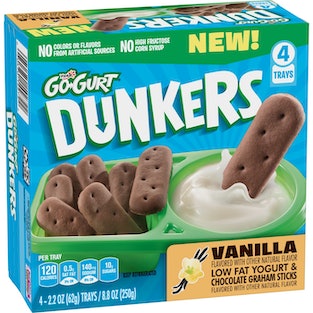 And, indeed, as food Instagrammer Candy Hunting notes, there’s a brand chain here worth following: “Go-Gurt/Yoplait is owned by General Mills, which also owns Betty Crocker,” the Instagram post about Dunkers observes; it then continues, “Dunkaroos were made under the Betty Crocker brand.” Could Dunkers therefore be seen as putting us “one step closer to the return of Dunkaroos in the U.S.,” as Candy Hunting suggests it might? We’ll just have to wait and see, but it does all seem to be staying in the family, as it were.

For all their similarities, though, Go-Gurt Dunkers still represent a pretty big departure from the Dunkaroos of our youths. With Dunkaroos, the draw wasn’t just that you got to dunk your cookies in something before you ate them; it was that you got to dunk them specifically into a tub of frosting. Yogurt is many things, but frosting is not one of them — it doesn’t taste like anything like it, obviously, but also, the texture is entirely different. The texture does seem to matter, by the way. According to food Instagrammer Junk Food Mom, the grahams were not only a little bit dry, but remained so even after being dunked in the yogurt. The account theorized that “a sweeter, animal cracker type of cookie would’ve worked better” — but I wonder if the issue is also that frosting and yogurt are entirely different beasts. 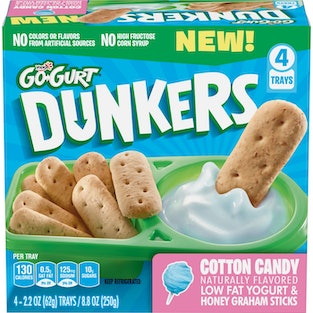 Your mileage may vary, though. For what it’s worth, Junk Food Mom said the Dunkers were still “fun” and “unique,” even if the grahams themselves and the Cotton Candy-flavored yogurt weren’t a hit for the adult palate; what’s more, yet another food Instagrammer, Bless My Eating Heart, noted that her five-year-old practically “inhaled” a pack of the Chocolate grahams with Vanilla yogurt. Reviews appear to be somewhat mixed, with personal preference playing a large part in how they’re received.

In any event, if you’re not feeling up for making your own Dunkaroos, you can’t get a hold of Walmart’s grown-up Dunkaroo dupe, and you’re not able to import them from elsewhere, Go-Gurt Dunkers might help scratch your nostalgia itch — even if there’s no frosting in sight. You can find out more about ‘em at Yoplait’s website.