The third annual Girls United Summit came back harder than ever in Atlanta, Georgia between our panels, activations, and our first-ever Future Makers Awards honoree dinner. Hosted by rising R&B singer and Bel-Air star Coco Jones, who brought her superstar personality, greeted attendees, and coordinated a fun ice-breaking bingo game to get to know one another at the invite-only event.

The Coca-Cola and Ford-sponsored dinner honored young women who have continued to be the blueprint of the culture during unusual times and have excelled in their fields of education, activism, entertainment, content creation, and entrepreneurship. Many familiar faces weres in attendance, such as Power actress Paige Hurd, influencer Aliyah’s Interlude, BStarPR founder Brandy Merriweather, celebrity publicist Derrian “Phreshy” Perry, and more.

With opening greetings from Girls United co-founder Rechelle Dennis herself, guests were prepared for a night of celebration at the Atlanta Contemporary Arts Center. From the gala vibes of libations, a three-course meal, and epic contortionist performances to the vibes of Muni Long and Zendaya‘s hits, the night was truly unforgettable. 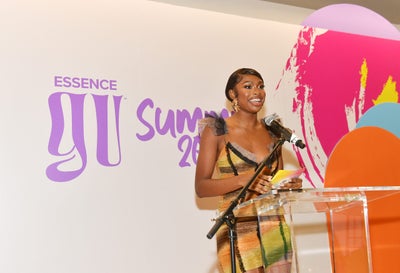 During the dinner, guests could indulge in conversations surrounded by what it means to be impactful in the culture and meet the women who are change makers for their community. Presented by Rechelle Dennis, our first honoree was Chelsea Miller, the co-founder of Freedom March NYC, a platform for calling out the rise of social injustice in our society, showing that Gen-Z’ers are capable of being youth organization leaders and active in their community.

“Black girls are the blueprint because we have been the foundation of every society, so it is on us that we give them the credit that is due, but even when that credit is not given, we still show up and do that work because we got us,” Miller told Girls United exclusively, following the receipt of her award.

Knowing the importance of Black women and protecting each other is something crucial that GU wants to provide, and it does start with us, no matter what age you are. From one education trailblazer to another presented by Harvard University student and advocate Aoki Lee Simmons, our next honoree, Trinitee Stokes uses her platform to amplify the importance of education by becoming the youngest person admitted into Emerson College, making her a certified Gen-Z change maker.  Her hard work was not done alone as she thanked her parents for nourishing her mind, but specifically her mother for putting her dreams on hold so Trinitee could chase and find her dreams. 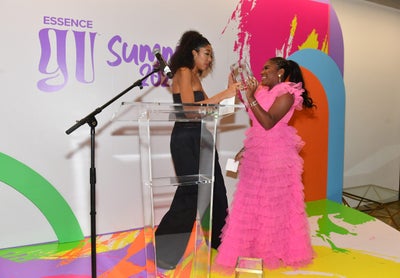 About Kenyatta: Kenyatta Victoria is an entertainment and culture reporter passionate about music, pop culture, and marginalized stories. She has bylines in publications such as Chicago Reader, INSIDER, Girls United, TransLash Media, and the Chicago Tribune.