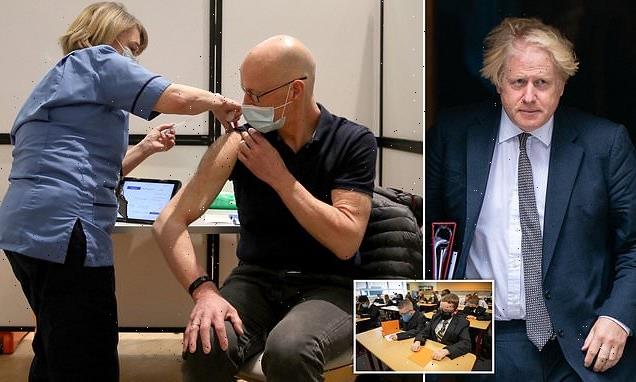 Get boosting, Boris… and never lock us down again: A stern warning from STEPHEN GLOVER as many voices predict a spike in Covid infections when new school term begins

Have you noticed something very strange? For the past few weeks there has been a blessed absence of Covid experts in the broadcast media prophesying doom and gloom.

It’s possible to get through an entire news bulletin on television or radio without being informed by an apocalyptic epidemiologist that the Government’s Covid policy is ridiculously lax and bound to end in calamity.

I fear, though, that our freedom from finger-wagging know-alls is short lived. They will soon be back, and may well try to bounce Boris Johnson into another lockdown, euphemistically known as a ‘circuit breaker’. The term is intended to sound less alarming.

One can be pretty sure this will happen because children in England, Wales and Northern Ireland are about to go back to school, and it is likely that infection rates will rise sharply.

They have certainly done so in Scotland, where most pupils returned to school a couple of weeks ago. 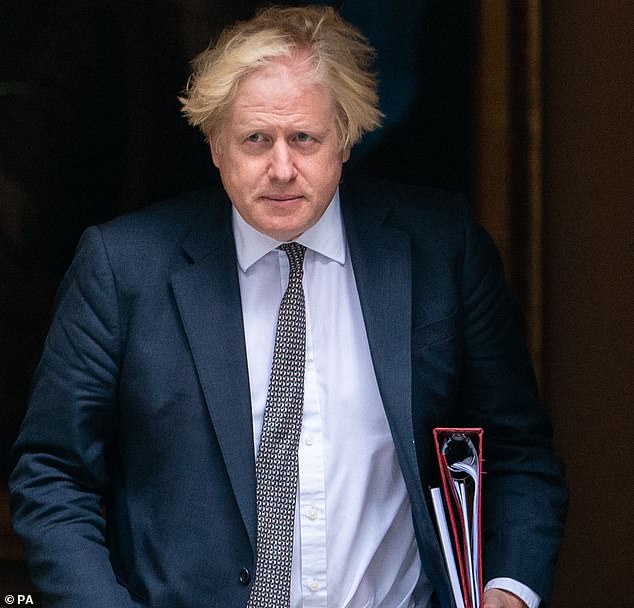 I fear, though, that our freedom from finger-wagging know-alls is short lived. They will soon be back, and may well try to bounce Boris Johnson into another lockdown, euphemistically known as a ‘circuit breaker’

Since then, daily new cases north of the border have more than doubled.

Of course, there may be additional factors at play, but there is little doubt that schools provide an ideal breeding ground for the virus.

How much infection rates will rise south of the border is impossible to say. Even the experts have become unusually reluctant to make predictions following the latest piece of stargazing by Neil Ferguson (‘Professor Lockdown’) of Imperial College, London.

In mid-July, days before the Government removed nearly all remaining restrictions in England, the Prof stated that it was ‘almost inevitable’ that new Covid cases would reach 100,000 a day in the UK, and possibly as many as 200,000.

As it was, they peaked at 54,674 on July 17, before roughly halving by early August. They then increased gradually before levelling out over the past week. The average daily infection rate in the seven days to yesterday was 33,570.

Meanwhile, the daily death toll, which had been creeping up through much of August, has been virtually constant over the past week in comparison with the preceding seven days, though yesterday’s figure of 207 was exceptionally high.

Let’s assume that the return to school will boost the number of new cases. When that happens, it is a racing certainty that the experts will be back on our screens demanding that the Government does something.

Scotland’s dour First Minister, Nicola Sturgeon, has ruled out a ‘circuit breaker’ for the moment.

Her hard-line adviser, Professor Devi Sridhar, admits a new lockdown would be ‘unbearable’ for the Scots. But that doesn’t mean that in a few weeks’ time she, or people like her, won’t be calling for new restrictions.

Whatever happens, we mustn’t have another lockdown. It would be a disaster in every sense — for the psychological health of the nation, for the still tottering economy, and for millions of people waiting for hospital operations.

I don’t believe the Government has prepared the ground for the impending ambush by experts.

Admittedly it has a lot on its plate, and Boris Johnson’s attention can be easily diverted. He needs to marshal his arguments against calls for another crackdown.

Carl Heneghan, Professor of Evidence-Based Medicine at the University of Oxford — one of the most sensible scientists, and consequentially shunned by the BBC — said in a podcast this week that a spike in cases in England is inevitable within two or three weeks of pupils going back. 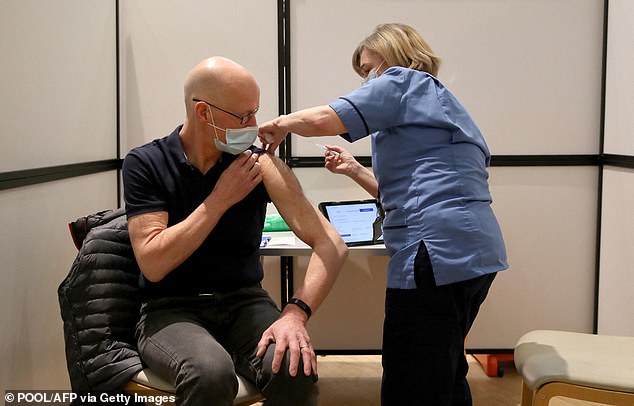 Vaccination — not the short-term fix of another lockdown — is the only way by which society can succeed in coming to terms with Covid so that we can go on living our lives. Pictured: A health worker administers a dose of the Covid 19 vaccine to Scotland’s Deputy First Minister John Swinney

He says: ‘If we hold our nerve, that won’t be a problem. If we panic and introduce restrictions again, cases will flatten for a bit. But then we’re in the same old pickle as before.’

In other words, lockdowns only provide temporary relief. They contain the virus for a while but they don’t get rid of it. We have to learn to live with Covid, and fortunately we are able to do so because of various vaccines.

Of course they aren’t infallible. Some double-jabbed people will get ill, and sadly a very small number of them will die. But vaccines do at least enable society to operate in something like the normal way.

The Government’s response to the demands for restrictions, when they come, should be to champion the vaccine, and to do much more to proselytise it than it has so far done.

A senior intensive care consultant at a leading teaching hospital recently described in the Mail the pity and frustration he and his colleagues feel at the high proportion of Covid patients they treat who have not been vaccinated.

This is what he wrote: ‘Looking at their medical notes, I know that all the Covid patients currently on the unit were offered the jab, but that 90 per cent of those on ventilators here are unvaccinated. I understand this figure is roughly the same at most other units.’

Why doesn’t the Government make more of this appalling statistic? It should highlight, in a much starker way than it has, the enormous protective power of vaccination, and the risks run by those who won’t be jabbed.

A few misguided souls will continue to avoid the vaccine, as is their right. But I believe that many people who are hesitant would take the plunge if the perils of not doing so were more compellingly illustrated.

Vaccination — not the short-term fix of another lockdown — is the only way by which society can succeed in coming to terms with Covid so that we can go on living our lives.

It follows that the Government is absolutely right in its intention to offer vaccinations to all children between 12 and 15.

The Joint Committee on Vaccination and Immunisation (JCVI) is yet to offer formal guidance to the Government. Let’s hope it does so quickly.

Granted, children of this age are most unlikely to get seriously ill or die from Covid.

But older people, even the double-jabbed, are in some peril if the disease is spread.

In effect, children are being asked to accept the infinitesimally small risks from being jabbed in order to benefit wider society. 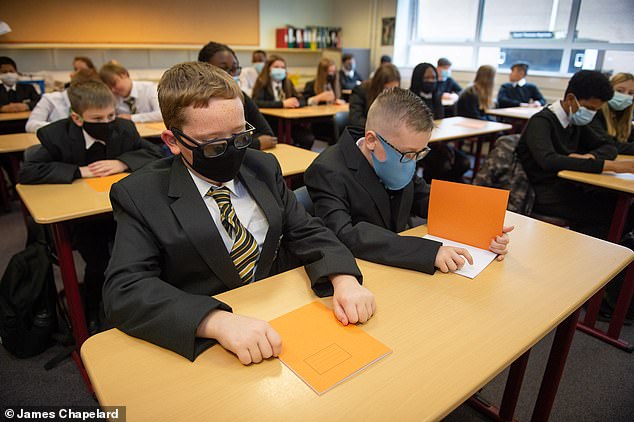 One can be pretty sure this will happen because children in England, Wales and Northern Ireland are about to go back to school, and it is likely that infection rates will rise sharply. Pictured: Pupils at St Thomas Aquinas RC Secondary School in Glasgow

We should also welcome yesterday’s announcement by the JCVI that around half a million Britons with severely suppressed immune systems will be invited for a booster jab in the near future.

Unfortunately, the JCVI is dragging its feet. The programme must soon be extended to include the over-50s. Former health secretary Jeremy Hunt was right yesterday to call for boosters ‘not just for the clinically vulnerable but for everyone’.

The effects of the jab slowly wear off. As Covid is going to be with us for the foreseeable future, we will all sooner or later require a booster. In Israel everyone over 12 has been offered one.

Boris Johnson has been on a roller coaster for the past 18 months — both personally, with his own bout of illness last spring, and as Prime Minister. One moment things appear to get better; the next they are suddenly and dramatically worse.

Now they are about to get worse again, though by how much no one can say. In view of all the criticisms of tardiness made of him in the past, Boris may be tempted to do what the self-proclaimed experts tell him to.