On Saturday, Nine (the owner of this masthead) confirmed that Karl Stefanovic will return to Today in 2020 – one year after he was controversially dumped as co-anchor of its struggling breakfast show. He will be joined by 60 Minutes reporter and Weekend Today presenter Allison Landgon. Gardner has chosen not to return to the program. 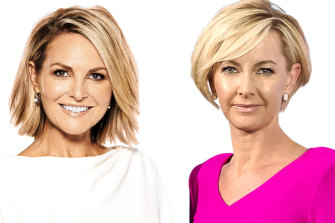 "Before we get to the news, we wanted to acknowledge this morning our colleague and friend Georgie Gardner," Knight said.

"You might have read over the weekend that Georgie has left the Today show and after a really challenging year, we want to wish Georgie all the very best."

Newsreader Tom Steinfort added: "She really has been a committed and passionate member of the team here, particularly when she’s been sharing the stories of everyday Australians who are doing it tough. These are issues that she wanted to focus on, and [to] shine a light on people who needed it most. She has always been a woman of strength, a woman of class. Who could forget her very wicked sense of humour that would just pop up from time to time as well."

"She gave it a red hot go," Knight said. "For now though, Georgie’s enjoying the time with her family, with her friends, taking Wilbur the dog for a walk. And we look forward to seeing you, Georgie, on our screens again very soon." 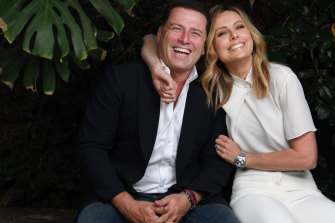 Karl Stefanovic will return to Today in 2020 with new co-host Allison Langdon.Credit:Louise Kennerley

In 2016, Stefanovic and former co-host Lisa Wilkinson notched up the most weekly wins in the major capitals, though Sunrise retained its No. 1 position nationally thanks to its strength in regional markets.

Any hope that Today would topple its arch-rival the following year were dashed when Wilkinson quit over a pay dispute, causing ratings to drop. Enduring tabloid criticism of Stefanovic's divorce and second marriage, and viewers' tepid response to his pairing with Gardner, only made things worse.

But when Nine tried to staunch the bleeding by removing Stefanovic, Today's audience sank to record lows. So far this year, its national viewership is down 17 per cent to 292,000 while Sunrise (457,000) and ABC News Breakfast (248,000) have held steady.

"We took a bold decision to try something new with two women hosting The Today Show this year and regrettably that has not worked for the audience," Nine's news boss Darren Wick said on Saturday.

Gardner said she was proud to have been part of the "first female hosting duo in Australian breakfast television" and was "naturally disappointed" it did not succeed.

"I learned a lot," she said. "I have no regrets, even though the scrutiny and public discourse has been daunting and disproportionate. It's also at times been cruel."

While Gardner opted not to return to Today, Knight will continue co-hosting this week. Both women will remain with the network, though their new positions have not been announced. Sports anchor Tony Jones will focus on his roles at 3AW, Nine News and Sunday Footy Show while contributing on an ad hoc basis to Today.

Wick said that Today's full line-up will be announced "in due course". Steinfort and entertainment reporters Richard Wilkins and Brooke Boney will remain with Nine.

Stefanovic and Langdon will take over as hosts in January. Their early morning competitors include Stefanovic's brother Peter, a fomer Nine journalist and husband of ex-Today newsreader Sylvia Jeffries, who co-hosts First Edition on Sky News.

“Truth is, we have wrestled eyeballs off Today this year, and Karl is going to have to work his backside off to get them back," Peter told The Australian.

"I’ll be doing my best to stop that.”