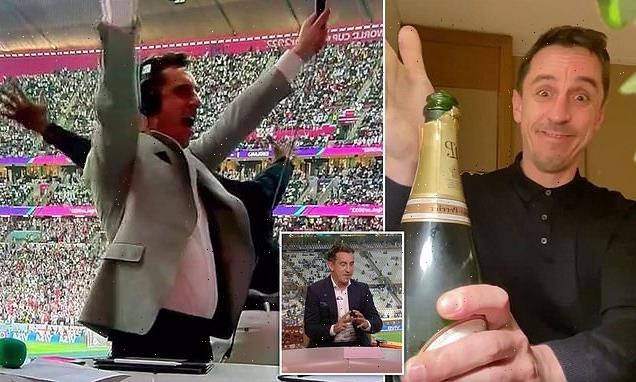 STEPHEN POLLARD: Gary Neville was a good footballer. He’s now a decent pundit. But as a hypocrite he’s in a league of his own

Hypocrisy, the saying has it, is the homage vice pays to virtue. Francois, duc de La Rochefoucauld, the 17thcentury French writer who coined the phrase, lived many centuries before Gary Neville, the multi-millionaire former footballer turned TV pundit. But in the league table of hypocrites, Neville is right up there at the top.

On Sunday, Neville used the occasion of the World Cup final to deliver a rant on ITV about Britain and British politics, comparing the status of migrant workers in Qatar — thousands of whom died while readying the country for the World Cup — with that of British strikers.

‘We should detest low pay, we should detest poor accommodation and working conditions,’ he began. ‘We can never accept that in this region or any other region — and it is just worth mentioning we’ve got a current Government in our country who are demonising rail workers, ambulance workers and, terrifyingly, nurses.’ 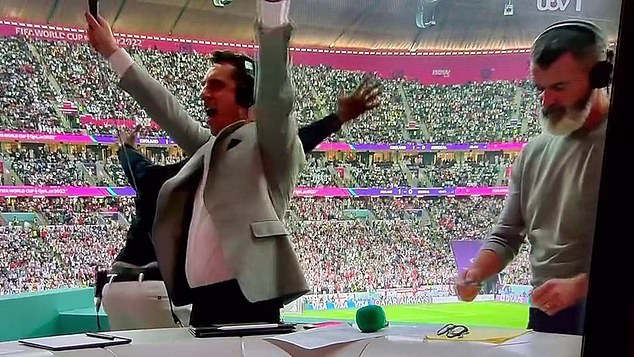 Neville used the World Cup final to deliver a rant on ITV about British politics, comparing the status of migrant workers in Qatar with that of British strikers

Neville is entitled to his views. But he is not entitled to use a sporting occasion to indulge in party politics.

If that was all, however, and Neville had just vented at the wrong time and in the wrong place, his words would not have generated half the anger that has followed since he let rip on Sunday.

The real issue, you see, is not what he thinks; it is that his words reveal his hypocrisy as never before.

Since he retired from football, Neville has set himself up as a moral arbiter, offering his views on current affairs on Twitter and elsewhere. Most of the time he simply parrots the Labour Party line. 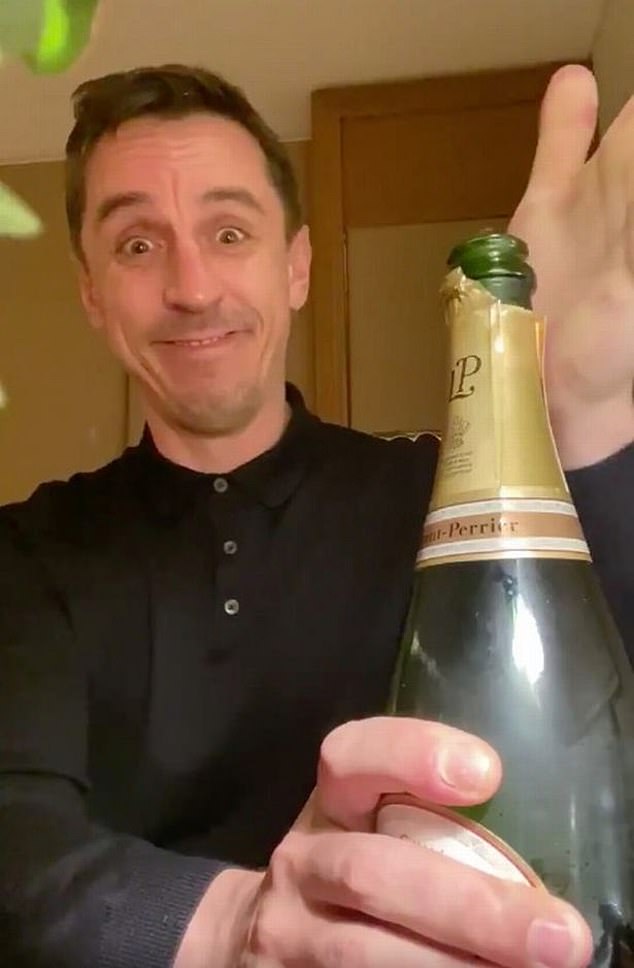 The real issue, you see, is not what he thinks; it is that his words reveal his hypocrisy as never before

Nothing wrong with that — ex-footballers are as free to hold political views as anyone. What enrages so many about Neville spouting off, however, is that while sermonising he is working for a broadcaster owned by the Qatari state, whose moral outlook could not be more different from the one he claims to espouse.

So he lectures us on workers’ rights from his ITV pulpit — drawing grotesque parallels between the plight of downtrodden migrant workers in Qatar and striking workers in Britain — at the same time as he trousers vast sums from a despotic state with scant regard for human rights.

For the World Cup, he was a pundit on the Qatari-owned beIN Sports network. His fee was confidential, but likely to have been in the millions.

He might argue that his position in beIN Sports allows him to expose the underbelly of the Qatari regime. But he is wholly compromised by accepting Qatari cash and cannot possibly be robustly critical of the regime that puts him up in its plush hotels.

What’s more, as Ian Hislop pointed out recently on Have I Got News For You, which Neville was guest-presenting, there was another option: ‘You stay at home and highlight the abuses. You don’t have to take the Qataris’ money.’

Hislop’s comment drew the programme’s largest cheer of the night — and Gary Neville was silenced.

It is only fair to accept that, on ITV on Sunday, he did argue half-heartedly that conditions for workers should be improved in Qatar: ‘We can’t have people being paid an absolute pittance to work, we can’t have people in accommodation that is unsavoury and disgusting. It shouldn’t happen here.’

Yet disgracefully, he then used this to make a political point about Britain: ‘But it shouldn’t happen with the nurses in our country either, where our nurses are having to fight for an extra pound or two pounds.’ 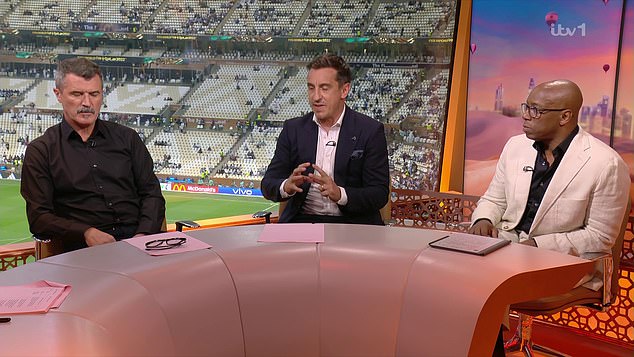 A signed-up Labour Party member, Neville is only too happy to attack the Conservatives for their alleged treatment of workers. But this is the man who pockets a fortune from a regime where some 6,500 migrant workers are estimated to have died building the very World Cup he is profiting from. It is obscene hypocrisy. And for all his virtue-signalling on issues such as LGBT+ rights, Neville is getting a fortune from one of the most repressive regimes for gay people in the world.

Same-sex activity in Qatar is illegal. Security forces have arbitrarily arrested lesbian, gay, bisexual and transgender people and subjected them to ill-treatment in detention, according to Human Rights Watch, which has documented cases of severe and repeated beatings and of sexual harassment in police custody.

How can Gary Neville square all this with lecturing us on what is right and wrong? I can’t really provide the answer, although I have had personal experience of his doublespeak.

It was in 2019, when Jeremy Corbyn was leader of the Labour Party. Along with virtually the entire Jewish community, I considered Mr Corbyn to be an anti-Semite. We feared for our future if Labour won.

On polling day, December 12, Neville declared his support for Corbyn by tweeting one word, ‘Labour’, with a red rose icon next to it.

I replied to his tweet: ‘Gary Neville doesn’t give a damn about Jews. At least that’s clear now.’

With most Jews dreading a Labour victory, his support for Labour showed he didn’t care what we thought.

Neville replied to me: ‘Can you retract that? If you vote Tory you’re a racist and if you vote Labour you’re a racist! Just cut this s*** out. It’s this stuff that is dividing this country.’

I retracted nothing. What I had written was correct.

It has to be said that, in terms of Qatar, Neville is not alone — singer Robbie Williams, another advocate of gay rights, pocketed a huge cheque for performing in the state during the World Cup. Nor is Neville the only former footballer to use his platform to hold forth on politics and morality.

As a freelance presenter, the BBC’s Gary Lineker has an exemption from the Corporation’s bar on presenters giving their opinions — a technical Get Out Of Jail Free card which surely strikes most people as ludicrous.

Lineker’s opening monologue for the Corporation’s tournament coverage addressed the human rights record in the host nation. Perhaps he was trying to burnish his credentials with his virtue-signalling.

True, Lineker was being paid by the BBC. But he, too, has taken the Qatari shilling — between 2009 and 2013, he was paid £400,000 a year by Al Jazeera, which is owned by the Qatari government, on top of a very substantial income from the Beeb. The contract apparently included ‘minimum five-star hotels’.

But in my book, no one comes close to Neville. He remains utterly shameless and offensively smug , responding to criticism of his comments on Sunday by tweeting: ‘Triggering all the right people.’

Five months after that seemingly Thatcherite declaration, he was appearing alongside Keir Starmer at the Labour Party conference, and later tweeting: ‘The Conservatives are a cancer on the UK.’

There is no doubt he has done well by capitalism, with investment in hotels, restaurants, film production and eco schemes said to be worth more than £70million. Yet even here he wants to have it both ways, saying: ‘I also believe that distribution of profit should be spread amongst us.’

With 85 England caps to his name, Gary Neville was a good footballer. He is a decent sporting pundit. But as a hypocrite, he is truly in a league of his own.