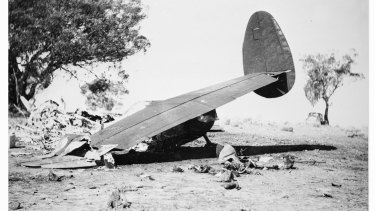 Wreckage from the crash in which 10 people died in Canberra.Credit:National Library of Australia – Dwyer Collection

Australia suffered a grave loss at a most critical stage in her history, when a Royal Australian Air Force bomber crashed a few mile from Canberra, while carrying two service Ministers, the Vice President of the Executive Council and the Chief of the General Staff, to a Cabinet meeting which was to have been held here today. All the occupants of the plane, ten in number were killed. The victims were:

The bomber came down among low hills, after having circled the aerodrome at Canberra, and immediately burst into flames. Before help could arrive the machine was totally destroyed by fire.

The occupants, trapped in the blazing plane, were practically incinerated, and in some cases the bodies were unrecognizable.

Within a few minutes of the disaster, the Prime Minister, who was waiting at Parliament House, Canberra, only eight miles away to welcome his colleagues, was informed. He immediately left to see the Governor-General, Lord Gowrie, and also made arrangements for the relatives of the deceased to be informed of the tragedy without delay. 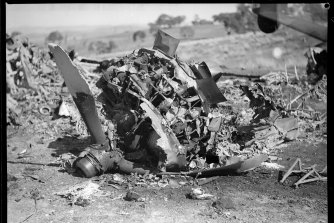 Propeller and engine wreckage at the site of the airplane crash.Credit:National Library of Australia – Dwyer Collection

After inspecting the wreckage of the plane, which was concentrated on one spot, flying men were of the opinion that but for striking a log the pilot of the plane would have had a good chance of making a pancake landing, in which case the occupants of the bomber might have survived.

The fact that wreckage was not strewn over a wide area, and the plan had not buried its fuselage in the ground, discounted the suggestion that it had nosedived.

The ill-fated plane left Melbourne shortly after 8.30 am, according to advice received here, and in perfect flying weather made the trip to Canberra in two hours. The machine was seen to circled above the Canberra aerodrome as if preparatory to making a landing. It then began to descend, and the machine swung over low hills about two miles from the aerodrome. Aircraftmen waiting to service the bomber watched it losing height, and then suddenly one engine was heard to falter, and as the big plane dipped on one wing it disappeared behind a clump of trees.

Almost immediately afterward a crash was heard, and in a few moments a column of black smoke shot into the air, the plane evidently having caught fire.

Mr. F. Tetley, garage proprietor of Queanbeyan, and his assistant, Mr Lawrence O’Brien, were pushing a motor car from the garage to the road when they heard a plane pass nearby. It was fairly low and they watched it as it flew towards the low hills across the Sutton valley about two miles away. They saw the left wing dipping dangerously, and Mr O’Brien remarked to his employer that he thought the pilot was taking a risk stunting so close to the ground.

As they watched the machine making a low circuit to the left it dropped rapidly nose first apparently in a stall. The pilot was unable to regain control. The two men, horrified, saw the machine strike the ground among the trees. Flames and smoke shot up immediately.

Mr Tetley said the column of smoke which rose from the crashed machine was 100 feet high. Mr Tetley telephoned the Queanbeyan police and directed them to the scene.

The plane crashed on the top of a small hill in a small clearing between two trees. It appeared as though the pilot had made a last desperate effort to bring the plane down on the only cleared space of any size for several miles around. The machine struck a large log in the middle of the clearing. The pilot had pancaked the big plane, but the log apparently ripped the undercarriage, the bottom of the fuselage and the lower part of the wings, containing the petrol tanks.

The machine was enveloped in flames when the police, ambulance officers and aircraftmen reached the scene.

When the flames had died down all that remained of the plane was half of the tail unit. The remained was a charred heap of ash and fused metal. The starboard engine had been partly melted by the heat and the wings had been almost entirely consumed.

Ministers at the Scene

Before the remains of the victims had been removed from the scene of the crash the Federal Treasurer (Mr Spender), the Postmaster-General (Mr Thorby) and the Minister of Supply (Sir Frederick Stewart) arrived. They waited while the doctors and air force men completed their grim task. In the meantime many people living in Queanbeyan and Canberra had motored out to the spot, but a strong guard of air force men was placed around the wrecked plane, and no one was permitted to approach within a hundred yards or so.

The chief of the air staff (Sir Charles Burnett) arrived in Canberra during the day. He is staying at Government House.

Two other Ministers can count themselves fortunate that they were not aboard the plane. The Assistant Treasurer, Mr Fadden, and the Minister of Customs, Senator McLeay, were offered seats, but declined the invitation.

Senator McLeay had intended to go by air, but on learning that the Controller-General of Customs was travelling by train, decided to accompany him, so that departmental matters could be discussed.

Mr Fadden had booked a berth on the train, and as he considered it inconvenient to cancel his reservation at a late stage he also rejected the invitation to travel by air.

It was the intention of Sir Henry Gullett to fly to Canberra with Mr Fairbairn and Mr Elford in Mr Fairbairn’s own plane, but at the last minute they all decided to use the air force plane

More fortunate were Mr P. T. Hayter, private secretary to the Minister of the Army, who was to accompany Mr Street in the plane, and Mr Tyrrell, an officer of the Department of Air, who was also to have been a passenger.

General Sir Brudenell White was desirous that his staff officer Lieutenant-Colonel Thornthwaite, should accompany him and arrangements were made accordingly, and Messrs. Hayter and Tyrell travelled by train to Canberra.

It is understood that the Ministers and the Chief of the Army General Staff were carrying vital documents relating to the war programme, but all were destroyed. Only a few personal effects of the victims were recovered. It is stated that a watch was found in the wreckage. It had stopped at 10.50.