Almost one in 10 kindergartens face being out of pocket if they join the Andrews government's free kindergarten scheme for 2021, with some not-for-profit providers at risk of losing hundreds of thousands of dollars.

Community kindergartens in this position say they will either have to cut back on staff and the number of hours of early learning they provide or opt out of the scheme and deny families a hoped-for saving of about $2000 in fees. 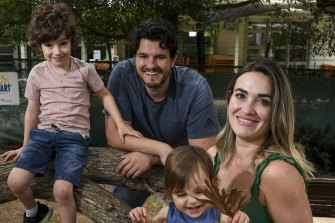 Steve Manos and Christina Paleologos, with their kids Ares, 5, and Atlas, 1, at the Brookville Kindergarten in Toorak.Credit:Penny Stephens

The government announced in last month's state budget that it would deliver "free kinder for 2021" at a cost of up to $169.6 million. Kindergarten operators were briefed on the initiative by the Department of Education and Training earlier this month.

They were told that up to 9 per cent of sessional kindergartens in the state would be financially worse off if they signed up to the scheme.

This is because the government has stipulated that kindergartens that charge annual fees of more than $2122 per child cannot charge parents a gap fee to cover the difference.

"Where a sessional kindergarten service charges a fee above the free kinder amount, they will be required to provide a free 15-hour kindergarten program and not charge families any compulsory out-of-pocket fees, including enrolment deposits or maintenance levies," the department has advised providers.

Renown, a not-for-profit kindergarten in South Yarra that was due to mark its 100th anniversary this year before COVID-19 scuppered its celebrations, faces an estimated loss of between $157,000 and $300,000 next year if it joins the scheme, president Ali McArthur said.

Renown's longest four-year old kinder program has annual fees of $5160. It is more expensive than average kindergartens because it includes 19½ hours of kinder classes a week, as well as lessons in music and sport taught by specialist teachers.

She said many parents who send their children to Renown justifiably expected to get it for free next year, given the government's funding announcement.

But she said the facility would need to cut back on staffing, eroding the quality of education provided, or absorb a huge financial hit to meet their expectations.

"Although the sentiment behind free kinder funding is very positive, the policy itself is ill-conceived and discriminatory against kindergartens that charge above $2122 per annum," Ms McArthur said.

Kate Hely is president of Brookville Kindergarten, a community kindergarten in Toorak. She said the not-for-profit kinder would lose about $250,000 next year if it joined the scheme.

"For us, losing $250k means we can't really say yes to that from a financial point of view, but the problem with that is it means all of the families in our community who have been hit hard by COVID, who are really struggling, are then unable to take that $2000 per child to help them recover as well," Ms Hely said.

Renown and Brookville are both in the state seat of Prahran.

Steve Manos sent his five-year-old son, Ares, to Brookville this year and said it was a good local kinder, well connected to the community.

Greens MP for Prahran Sam Hibbins said not-for-profit kindergartens in his electorate were being put in an unfair position.

"The state government needs to fix this to make sure all kinders and families can benefit from the scheme."

Kindergartens do not have to sign up to the free kinder initiative. Those who face a funding shortfall if they do have been told they can ask parents for a voluntary donation to cover the shortfall, in lieu of a gap fee.

A spokesperson for the Andrews government said that while services have a choice about participating in the scheme, families will be keen for them to do so.

"The vast majority of sessional kindergarten services charge less than $2122 and will financially benefit from the initiative, as well as being able to provide their local families with a free 15-hour program," the spokesman said.

"The intention of this initiative is to get as many children into a free kinder program, saving families money and helping parents, particularly women, get back into the workforce."