Buffalo sauce is great, but sometimes, it’s a bit… messy. And it gets messier still when you throw in some ranch dressing on the side — and sometimes, you just don’t want that. But hey, guess what? If you’ve found yourself longing for a way to make everything you eat taste like wings, but without the literal sauciness, good news! Frank’s RedHot makes a Buffalo Ranch Seasoning mix that might be exactly what you’re looking for. The words “yes, please” don’t even begin to cover it.

The seasoning itself isn’t totally new; it debuted in 2018 following McCormick’s acquisition of Frank’s RedHot as part of the former’s push to make the latter more visible. But food Instagrammer Junk Banter just reminded us all of what a glorious thing Frank’s RedHot Buffalo Ranch Seasoning is, so let’s take a moment to appreciate it together, shall we?

There’s a lot going on in this stuff. The base, of course, is a combination of buttermilk powder and salt (gotta get that ranch tang from somewhere); then, a “cayenne pepper sauce powder” gets added to the mix, which throws in a kick of cayenne, vinegar, more salt, and garlic; actual garlic powder jumps in after that, along with onion and spices like paprika and red pepper; and then a few other ingredients finish the whole thing off, including tomato powder and cultured whey. The resulting seasoning creates a dry version of buffalo ranch sauce you can chuck on top of everything. 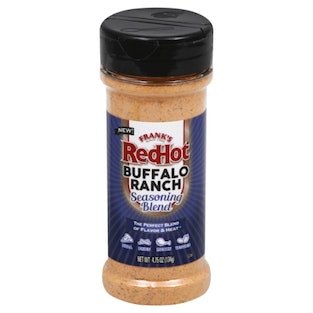 Noted Junk Banter, “Frank’s Red Hot Buffalo Ranch seasoning is incredible. It’s a surefire way to make bland food taste good and great food taste better. Pizza, popcorn, salads, tots… these are just some of the things I will put this on when I’m not pouring it directly into my face.”

Frank’s even has a few recipes available on their website specifically designed to utilize the Buffalo Ranch Seasoning — so if you’re looking for something a bit more creative than just sprinkling it on top of popcorn, they’ve got you covered. Buffalo ranch pull-apart sandwiches, anyone? No? How about creamy buffalo ranch chicken pasta, then? Sounds like a match made in heaven to me.

(Although to be clear, there’s also nothing wrong with sticking with the whole popcorn seasoning thing. You do you, my spicy friends. You do you.)

Niche seasonings seem to be having A Moment lately — although to be fair, it’s not an entirely new phenomenon. Cult favorites and regional specialties have long enjoyed a sort of fanatic devotion among those who love them: In and around Maryland, there’s Old Bay; prime rib lovers have had a thing for Lawry’s Seasoned Salt for more than 80 years; those who pledge their allegiance to Adobo seasoning know it’s good on pretty much anything you can think to use it on; and so on and so forth.

More recently, though, the seasoning and spice blends that have been popping up on all of our radars — often after going viral on ye olde internets — are a bit more… specific. Trader Joe’s Everything But The Bagel Seasoning, which includes the same blend of sesame seeds, poppy seeds, salt, garlic, and onions that make “everything bagels” the glorious savory experience they are, hit the scene in 2017, for example; quickly gaining steam, recipes that incorporated it — or even tried to recreate it — began popping up all over the place soon after. Umami Seasoning (which, coincidentally, is also a Trader Joe’s specialty) has also just arrived, using a blend of salt, porcini and white button mushrooms, onion, mustard seed, red pepper, black pepper, and thyme to recreate the rich, savory taste referred to as umami.

A seasoning that recreates the taste of buffalo sauce mixed with ranch dressing may not be quite a niche as those other recent viral hits, but it certainly fits in with the ongoing trend. Find out where you can get Frank’s RedHot Buffalo Ranch Seasoning near you here. And enjoy!