A vegan-turned-carnivore has defended not giving her toddler son any vegetables, and feeding him the same diet of steak, organs and bone marrow that she swears by.

After converting to vegetarianism at just 12 for moral reasons, Gloria Zasso, now 30, from Munich, later became a vegan, shunning all animal products entirely.

But after her son Isaac, now two, was born in 2017, she suddenly developed rheumatoid arthritis – an autoimmune disease, causing pain and stiffness in the joints – which left her hands and feet in so much agony that she struggled to even brush her teeth.

Doctors offered to put her on a course of immune suppressant drugs – but stay-at-home-mother Gloria, was determined to treat herself naturally.

By conducting her own research, she arrived at the theory that it could be her diet that was to blame, owing to a deficiency in certain nutrients contained in animal products. 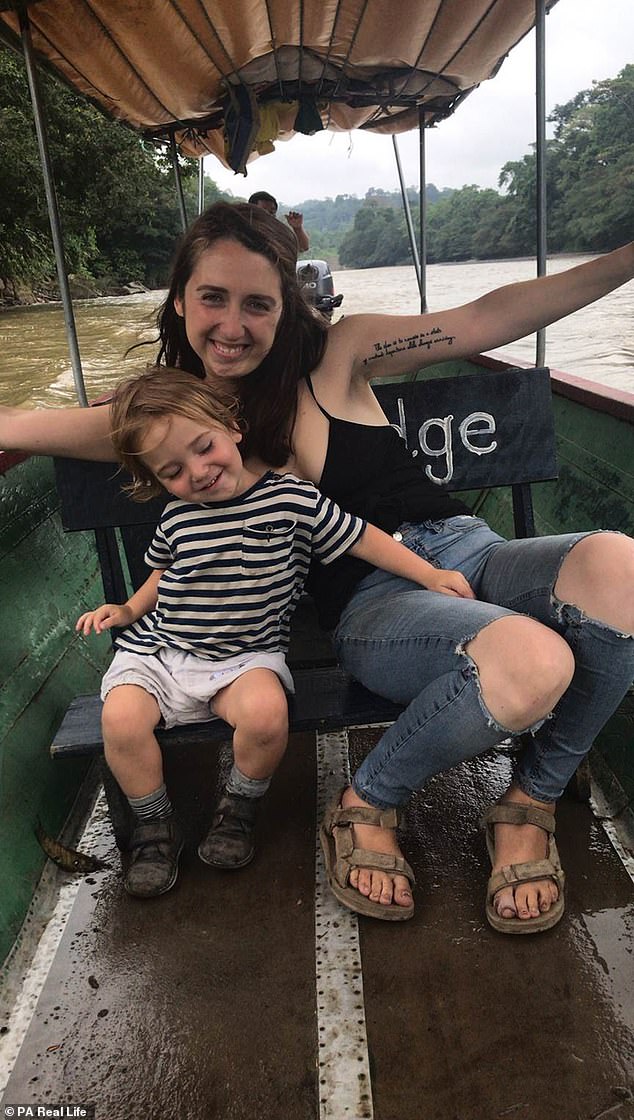 Pictured: Gloria Zasso, 30, from Munich, on a boat with her two-year-old son, Isaac. She is convinced the Carnivore Diet eased her rheumatoid arthritis and feeds her son the same raw meat, brains and broth that she survives on 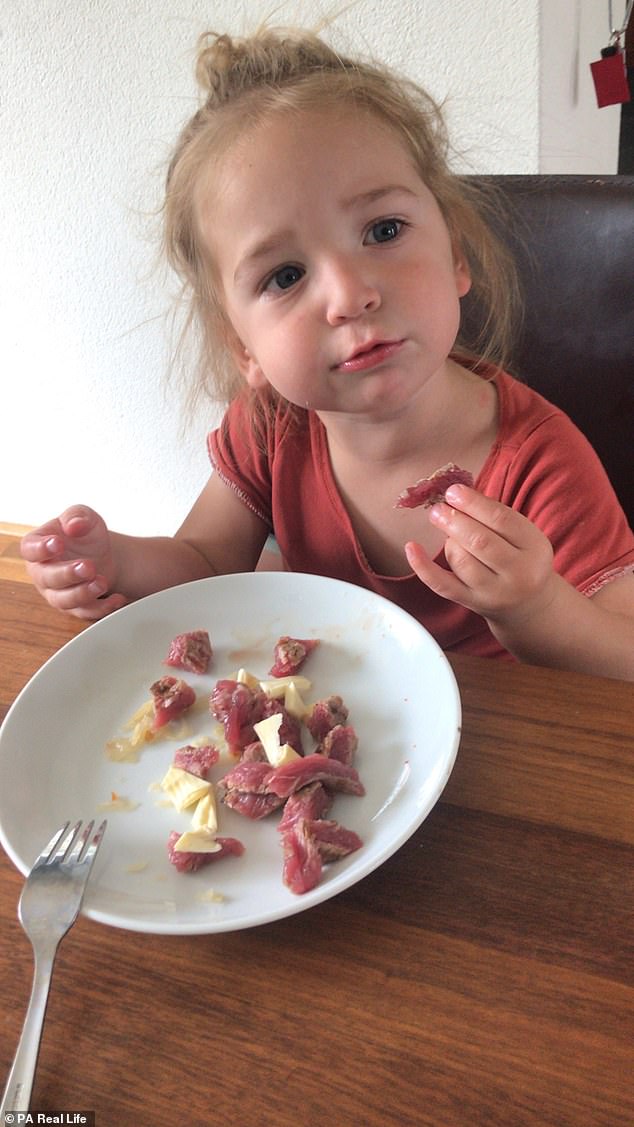 At two, Isaac eats the same diet of raw meat as his mother. He occasionally has some fruit, but doesn’t eat any vegetables

Explaining how she then made the radical swap from a plant-based diet to consuming nothing but meat, she said: ‘I did lots of research and decided I would give eating meat another go. Even though the idea made me feel disgusted, I was in so much pain I’d try anything.’

And so, in September 2018 Gloria decided to incorporate meat into her diet, starting by eating a portion of raw liver.

She said: ‘The first time I did it, I really had to force it down and hold my nose while I ate it – but after that I began to feel better.’

Then the following month, October, she made the decision to go full carnivore, eating only animal products.

And her IT consultant husband Thomas, 30, and their son have also adopted the diet.

‘Now, Isaac and Thomas eat almost the same as I do, and they seem to both enjoy it,’ she said.

‘Of course, I get a lot of criticism from people I know, and people on social media, particularly with regards to Isaac, telling me that it’s irresponsible not to give a child vegetables. 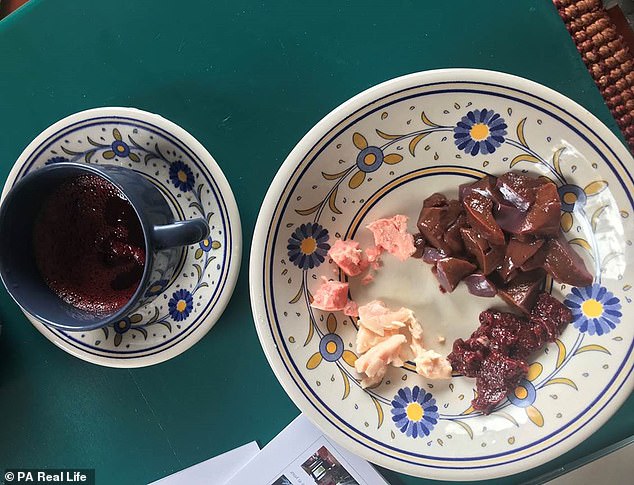 A meal of raw chopped liver and beef fat. Gloria said she tries to eat ‘nose to tail’ in order to reduce wastage

‘As a mother, you are always questioning your choices, and I do worry about what he eats.

But so far he is healthy and active, and you have to listen to what the body is telling you.’

Having never enjoyed eating meat because she disliked the taste, and feeling it was ‘obnoxious’ to kill and consume animals, Gloria decided to go vegetarian when she was 12 – despite her family doctor warning her of the risk of iron deficiency. 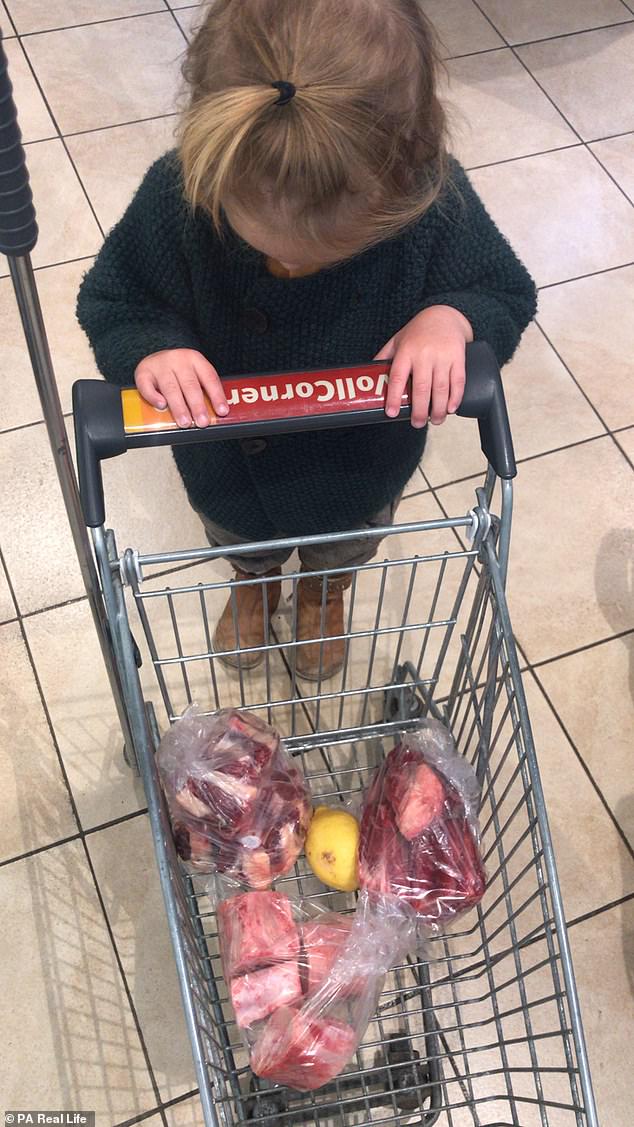 Grocery shopping, minus any greens! The stay-at-home mother said she made sure to only buy good quality meat from the butchers

At first, she felt perfectly healthy, but when she reached her early 20s, she started getting ill on a regular basis with flu, urinary tract infections and bronchitis.

So, aged 24, in a bid to bolster her immune system, which doctors told her was weak, she decided to adopt a vegan diet instead.

She explained: ‘It was at a time when lots of people were talking about veganism as a way to improve your health, and so I thought I’d give it a go.

‘I’d been on antibiotics two or three times a year and I didn’t want to do that anymore. 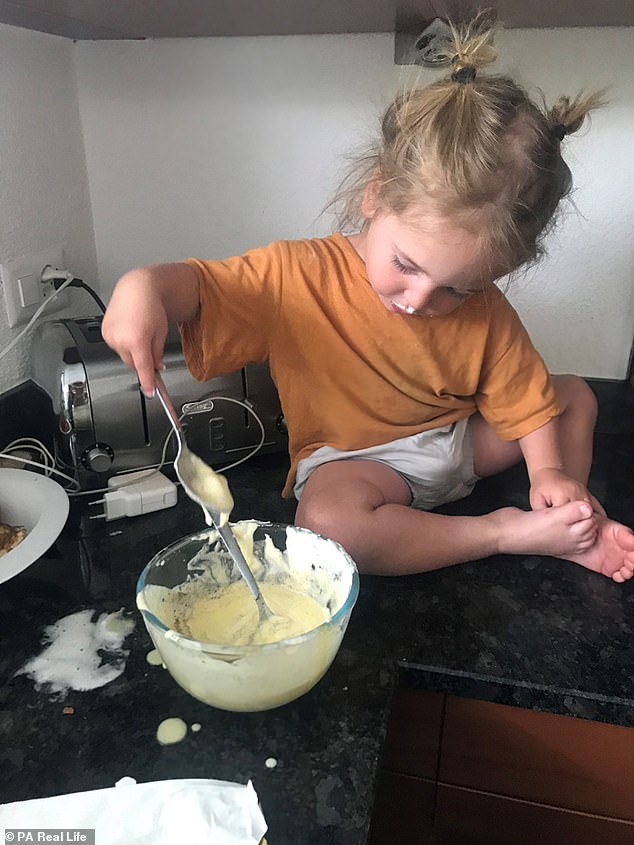 Isaac helping his parents cook at home. Following the birth of her little boy, Gloria developed agonising pain in her joints 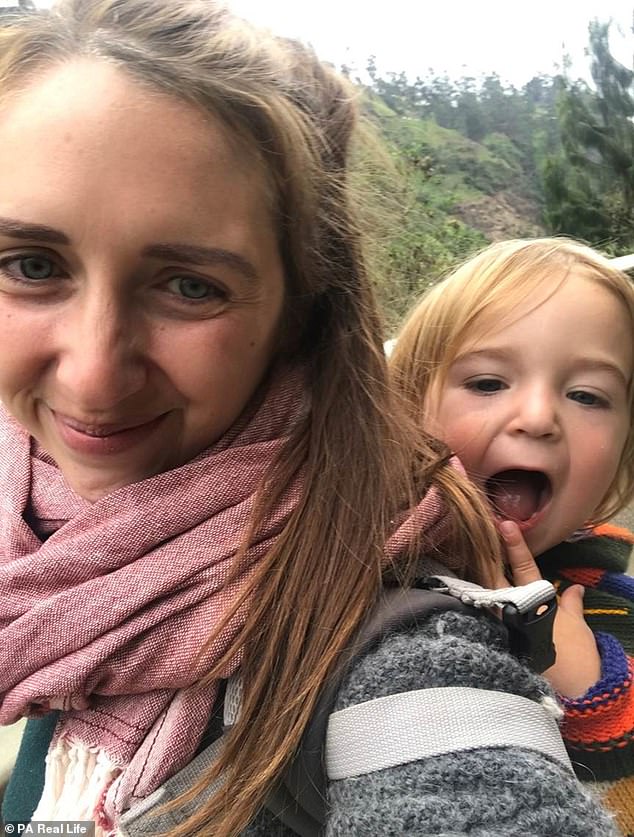 The mother and son duo enjoying some family time outside. A nutritionist commenting on the family’s diet said Isaac needed fibres in order to have a healthy diet

‘And it worked. I didn’t get sick as much, and just generally felt much more energised. I was happy and thriving.’

But that was all to change following the birth of Isaac, when, at three weeks postpartum, Gloria was struck by crippling pain in the joints of her hands and feet.

She said: ‘The condition came out of nowhere and was incredibly painful, to the extent that I often couldn’t walk, brush my teeth or lift my newborn son up, which made me feel horrible.’

Consulting medics, she was diagnosed in March 2017 with rheumatoid arthritis, a long-term condition that occurs when the immune system attacks the cells which line the joints.

They offered to put Gloria on a course of tablets including methotrexate, which is also used as a chemotherapy drug – but she turned it down. 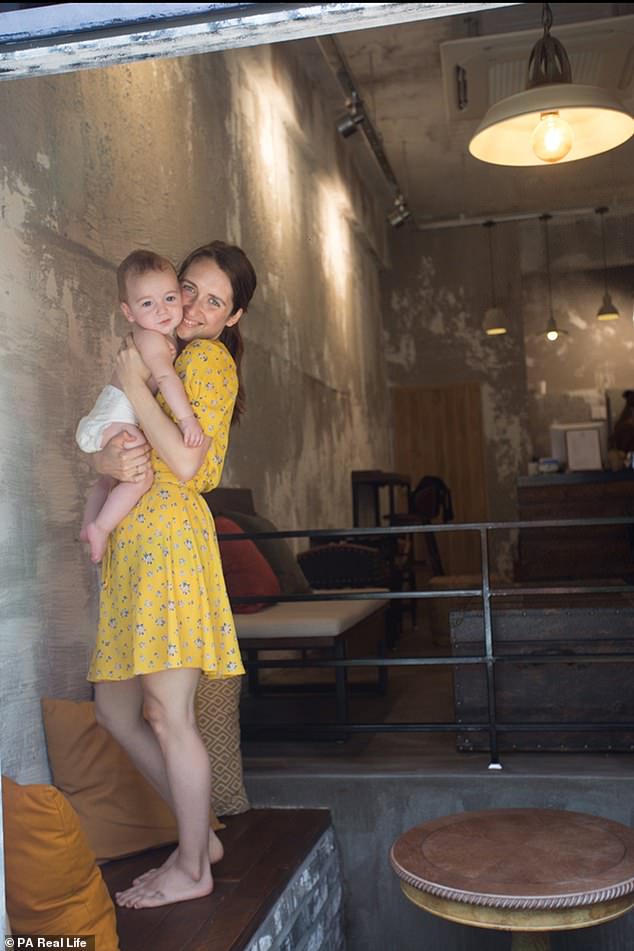 Soon after the birth of Isaac, Gloria’s joint pain became so bad she could no longer pick her newborn up 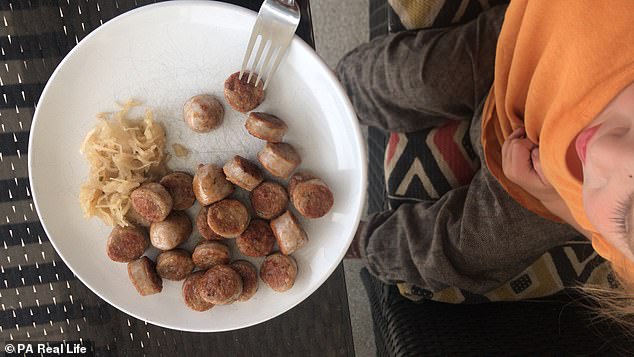 Isaac eating a plate of sausage. Gloria came across the ‘carnivore’ diet online and was intrigued to see if it would help with her pain

‘I refused to take them – I didn’t want to poison my body,’ she explained.

Desperate to cure herself through natural means, the new mother began researching her condition intensively, eventually becoming convinced her strict vegan diet was not helping matters.

Slowly reintroducing herself to animal products in August 2017, Gloria started supplementing her diet with eggs, dairy and bone broths – a move which she said immediately saw a slight improvement in her health.

Then, in 2018, with her pain almost unbearable, she ate meat again for the first time since she was a child – and claims that is when improvements really began to show. 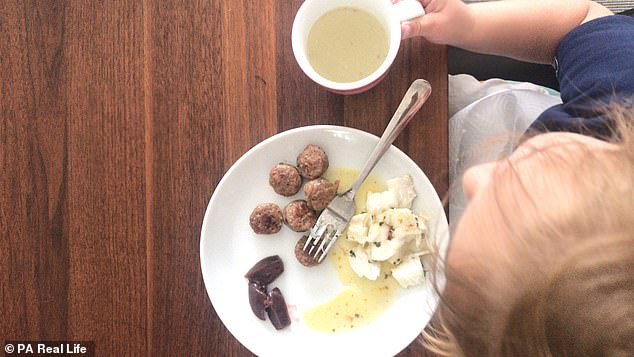 Eggs and liver. Gloria eats raw bone marrow for breakfast and brains for dinner and her son Isaac is on the same diet 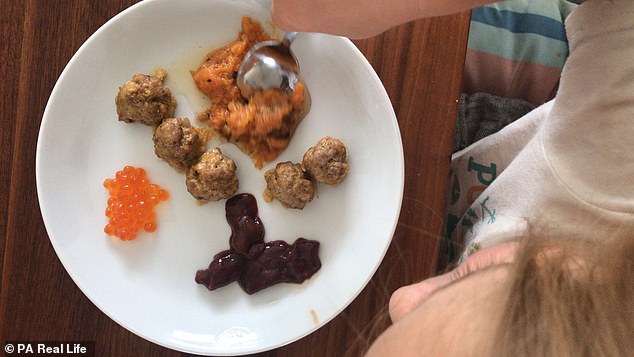 ‘The thought of eating a steak made me feel like vomiting, but I knew I had to try everything to get better, so I went for it,’ she said.

But still with some residual aches in her joints, her drive to discover a complete and lasting ‘cure’ persisted.

Then one day while searching the internet, she came across the ‘raw carnivore’ diet.

What is rheumatoid arthritis?

Rheumatoid arthritis is a long-term condition that causes pain, swelling and stiffness in the joints. The symptoms usually affect the hands, feet and wrists.

There may be periods where symptoms become worse, known as flare-ups or flares.

A flare can be difficult to predict, but with treatment it’s possible to decrease the number of flares and minimise or prevent long-term damage to the joints.

Some people with rheumatoid arthritis also experience problems in other parts of the body, or more general symptoms such as tiredness and weight loss.

You should see your GP if you think you have symptoms of rheumatoid arthritis, so they can try to identify the underlying cause.

Diagnosing rheumatoid arthritis quickly is important because early treatment can help stop the condition getting worse and reduce the risk of further problems such as joint damage.

Rheumatoid arthritis is an autoimmune disease. This means your immune system – which usually fights infection – attacks the cells that line your joints by mistake, making the joints swollen, stiff and painful.

Over time, this can damage the joint itself, the cartilage and nearby bone.

Intrigued, she delved further and read accounts of others claiming to have had similar autoimmune illnesses eased by it.

She explained: ‘It didn’t sound particularly pleasant, but I wasn’t eating meat for pleasure anyway, so I thought I might as well try it.’

Now, still refusing to take prescribed medication, she eats raw steak or raw offal for breakfast, followed by a cooked meat dish such as slow cooked lamb shoulder for dinner.

And, joining her for every gory meal are Thomas and Isaac, although the toddler does occasionally also eat fruit on top of the carnivorous diet. 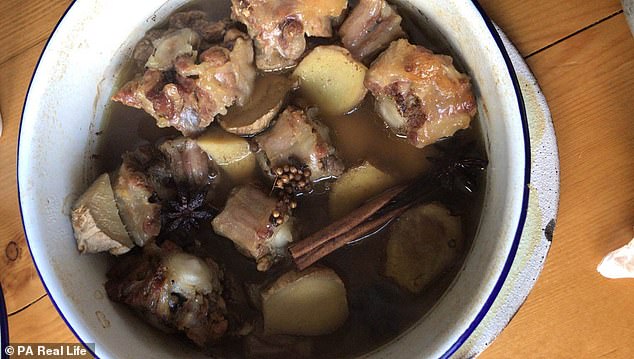 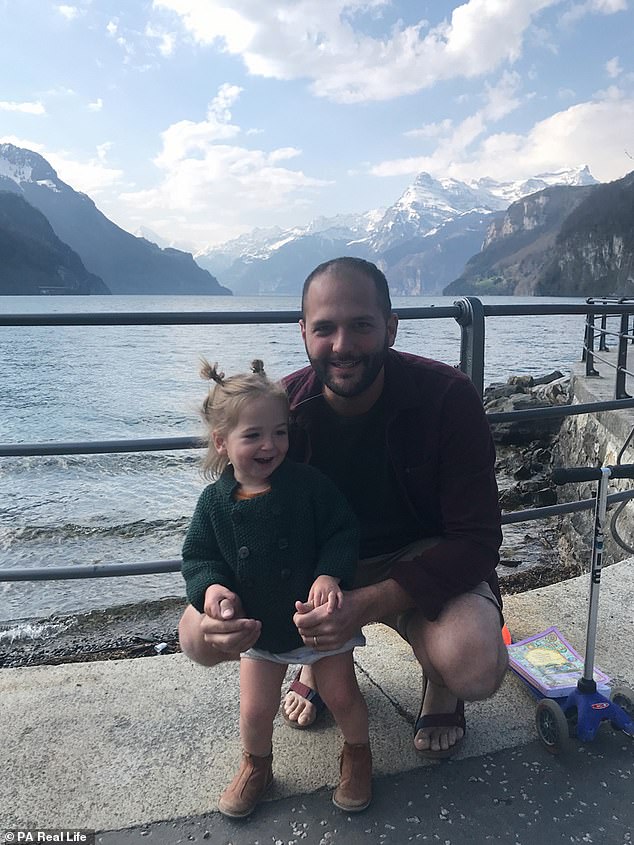 Isaac with his father Thomas, also 30. Gloria said she still didn’t like the taste of meat and saw it as a ‘medicine’

But the beef steak, kidney, liver, heart and lamb brain – which she buys from local butchers – do not come cheap, and Gloria as she only eats responsibly sourced food.

‘I am still against the mistreatment of animals, but I don’t hold the philosophy still that we shouldn’t eat animals at all,’ she said.

‘I make sure that everything we consume has been treated well and killed humanely, and on top of that try to eat “nose to tail” so that there is as little wastage as possible. And I’m at peace with that.’

She continued: ‘I still don’t love the taste of eating meat – I still see it as a kind of medicine, but one day it might be one I enjoy.

‘I feel so much better now. I can live my life again and am able to function, which for a while I could not.’

Daniel O’Shaughnessy, a nutritionist for The Naked Nutritionist clinic in Harley Street, London, warned of the risks of eating raw meat.

He said: ‘In a diet such as this there is no fibre which is not considered healthy at all, especially for a child in early days of development.

‘Children need nutrients from plants to thrive and grow and ward off deficiencies.

‘I would not recommend this diet be mimicked if someone is suffering pain from rheumatoid arthritis. I would suggest someone seeks advice from a health professional before changing their diet to support a diagnosis.’