The 2020 Sydney lord mayoral race slated for September looks set to unleash more fireworks than New Year's Eve on Sydney Harbour – if the signs in Bundeena, where one likely high profile contender has a holiday house, are anything to go by.

Five female candidates look set to contest the prized role, which for a state like NSW, with the lowest number of women in elected local government, is a good thing. But it could be a cat fight. 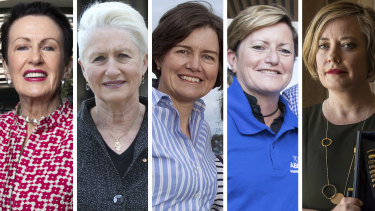 On the left, deputy lord mayor Linda Scott is canvassing her community about running as a Labor Party candidate.

On the right the Liberal Party pre-selection is not resolved. Liberal councillor Christine Forster, former PM Tony Abbott's sister, is a likely contender. So too barrister Louise Clegg, wife of Energy and Emissions Reduction Minister Angus Taylor. Despite her protestations that she won't contest any Sydney-based mayoral race as she lives in Goulburn, senior Liberal Party sources say she may still throw her Akubra in the right-wing ring. Earlier this month, the Australian Federal Police dropped its investigation into her politician husband over doctored documents aimed to damage the climate change credentials of her could-be competitor lord mayor Clover Moore.

The incumbent independent Cr Moore, 75 this year, enjoys the same sort of popularity as her fellow septuagenarian independent, 78-year-old Bernie Sanders, who won the crucial New Hampshire primaries in the United States this week. While not confirmed as a candidate, Cr Moore is widely tipped to attempt to extend her tenure to 20 years in the top job at the City of Sydney.

It's in the independent ranks where the fight is likely to be most fierce, given the falling out between Cr Moore and her former independent ticket mate Dr Kerryn Phelps, who sensationally quit “Team Clover” as her deputy in 2017. The political aspirations of the short-lived independent member for Wentworth and former Australian Medical Association president are no secret. But it may not be smooth sailing for her if she contests the Sydney lord mayoral race, according to the residents of Bundeena where she now owns a holiday house, and is again testing the waters.

The celebrity medico and her partner Jackie Stricker-Phelps were already known as "self appointed mayors" in this sleepy hamlet in the Royal National Park before they decamped for a Bowral weekender in 2016. Now locals are bracing themselves for their return.

As revealed by PS at the end of last year the two bought a $3.25 million waterfront property on Bundeena's Hordern's Beach.

Since the 1990s, a four-knot speed limit sign has been on the beach at the front of their new house to help protect the local community and to address existing concerns about speeding vessels in the Port Hacking waterway.

It was erected along with three others, after locals campaigned in the wake of an accident when a child was badly injured by a speeding jet ski. 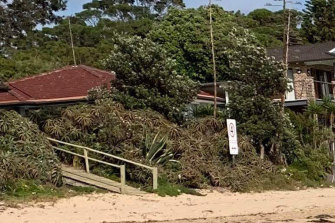 PS can reveal the sign at the front of the new Stricker-Phelps abode has been removed since they purchased the property and will be relocated to a nearby council reserve pending Sutherland Shire Council approval.

"There was a long-term agreement between NSW Maritime and the former home owner for the middle sign to be placed on their private property.

"Recent new owners of the property have requested the sign be moved to another location," a spokesman for the Department of Transport said.

The sign removal has caused considerable chatter in the community – with the previous home owner George Harrison (the former local milkman NOT the dead Beatle) piping up on an online forum on the matter to defend the move from private to public land: "I think it is unfair and unwelcoming to use such an issue to criticise anyone." 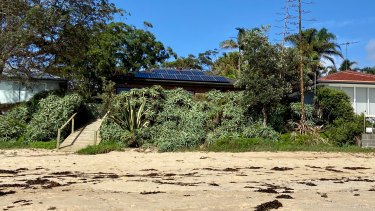 As previously reported here when the Stricker-Phelps owned another property on nearby Gunyah Beach, the couple had some disputes with locals about dog poo pick-up on the beach in front of their home. They also built a boat ramp near their beach house which locals used to take great delight in sitting on the end of, some going so far as to picnic on the sacred sandstone.

Another issue which did not endear the two to Bundanesians, is they would bring their own produce purchased from Potts Point (they own a property there too) to their weekend idyll, rather than shop locally.

"This is a local no-no as everyone relies on the local IGA and it's actually very good. It's a two-way thing of mutual survival and benefit," several Deep Throats chorused. Many will be happy if Ms Phelps is too busy on the city lord mayoral hustings, to cast her shadow – and that of Ms Stricker's – over this corner of the Shire before the September election.

Devilish Teddy Tahu has something to sing about

Kiwi baritone Teddy Tahu Rhodes, whose middle Maori name means "to set on fire" stars as the devil in the Australian Opera's Faust which opened at the Opera House this week.

Who could forget when the arts world was set ablaze with the smouldering photos of him kissing his South Pacific co-star Lisa McCune in 2012. The two were snapped in a passionate embrace while he was married to, but separated from, opera singer Isabel Leonard. McCune, a four-time Gold Logie-winning Blue Heelers actor, was married to but separated from her husband Tim Disney. 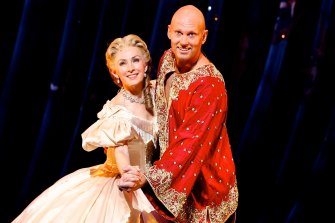 Teddy Tahu Thodes and Lisa McCune in The King and I in 2014. Credit:Dallas Kilponen

McCune and Rhodes did go on to become a couple, and star in a second musical together, The King and I, in 2014. They've both remained tight lipped about their tryst and at the time went to great lengths to hide their fling, always leaving the Opera House separately after performances. 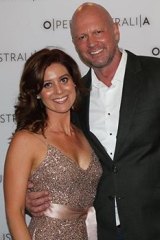 Living up to his "sizzling" moniker, we're told the handsome towering performer – who stands at 197 cm, or 6 Foot five – has fallen for another leading lady. This time it is Opera Australia's principal soprano Julie Lea Goodwin, who starred as Musetta in La Boheme at the Opera House last month. The two were spotted on the red carpet together recently at the Arts Centre in Melbourne, with Goodwin posting on instagram with the caption: "A night out with the devil."

The 53-year-old baritone and the 32-year-old soprano starred together there last year in Il Viaggio a Reims, where the romance is believed to have blossomed.

In his current role, Rhodes – whose mother is related to Queen Elizabeth II by marriage – plays the charming Méphistophélès, who as the devil makes a pact with erudite Faust: exchanging his soul for worldly pleasures.

Goodwin is considered an up-and-coming performer who last year starred in the roles of Maria in the outdoor production of West Side Story on Sydney Harbour and Wendy Whiteley in the world pemiere of Elena Kats-Chernin's Whiteley.

Meanwhile in other matters musical, another (b)romance was at play this week when singer Jimmy Barnes came to see his friend Richard Tognetti's Australian Chamber Orchestra play Beethoven on Tuesday night.

Fresh from the finale of the band's Blood Moon Tour last weekend, the Cold Chisel frontman gave his Wollongong surfie-violinist mate and musicians an enthusiastic standing ovation following the orchestra's treatment of the German composer's first three symphonies. In her pre-performance talk ACO artistic administrator Anna Melville said Tognetti had wanted to put together a whole load of composers' second symphonies into a performance and call it the "big number-twos" – but the marketing team poo-pooed the idea.

Sydney's Gay and Lesbian Mardi Gras kicked off on Friday, with its 2020 theme "What matters?" on display – like the fluttering rainbow flag raised at Sydney Town Hall last night. With climate change a concern, one performer Sarah Ward – whose political satire F— Festival opens at the Seymour Centre on Wednesday – has called for a ban on glitter and sequins at the normally flamboyant parade.

"The days of sequins and glitter are numbered. They are 10 seconds of wow then stay on the planet for thousands of years, as long as plastics," she says.

In her variety show – featuring only costumes made from recycled materials – she stars as queer cabaret icon Yana Alana. It is so racy even the not normally staid Mardi Gras people who commissioned the work have had a hard time promoting it. 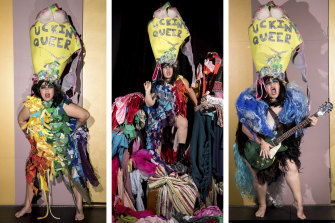 "It's a satire where I have Scott Morrison's face drawn on my bum and make my butt cheeks talk," says Ward, who first did the same performance mocking Donald Trump – with a character called Donald Rump and got a standing ovation.

"You don't even have to change what they say… people get the joke that politicians are really all arseholes," she said.

She does want to warn showcomers there will be nudity but not gratuitous genitalia on display at the show which runs until February 25.

"I protect the audience so they never see my genitals … I have such a big arse, it's layered like the comedy."

Unsurprisingly, this year's Mardi Gras Parade on February 29 will pay tribute to the heroes of the NSW Rural Fire Service – with a fully kitted firefighter followed by a rainbow striped fire tank and a host of gay firefighters.

The goal is to show "our diversity while supporting a common purpose," the RFS float description says.

Firefighting crews are indeed a diverse bunch. PS hears former PM Tony Abbott found himself on the end of a fire hose in Cooma along with former Kevin Rudd chief-of-staff David Epstein, and a high profile member of Greenpeace, known by the nickname, "the frogman".

Andrew Hornery is on leave.